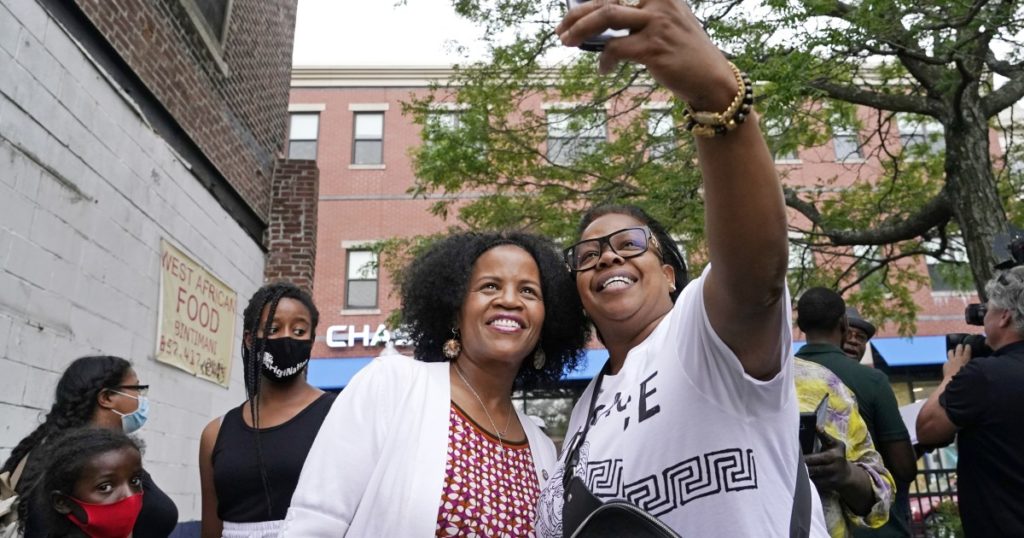 The voters of Boston, a city with a notorious history of racism, face a once-unimaginable political tableau in the mayor’s race this year. For the first time, the four top candidates are all women of color.

Boston is an unlikely pioneer in a change that is inching into electoral politics across the nation: A growing number of women of color are running for the highest offices. Enough are running that they are increasingly vying against each other in Virginia, North Carolina and New York.

In Boston, Kim Janey this year became the first Black person and first woman to helm the city when she was appointed acting mayor to succeed Marty Walsh, who is white and is now President Biden’s Labor Secretary.

Now Janey, seeking a full term as Walsh’s successor, is competing with three other women, all Boston city councilors: Andrea Campbell, who is Black; Michelle Wu, who is Asian American; and Annissa Essaibi George, whose father is Tunisian and mother is Polish, and who identifies as a woman of color.

Boston has always been known as a liberal stronghold, but its reputation as a bastion of 20th century racial tensions in the North was established in the national psyche by the tumult and tensions surrounding desegregation and school busing in the 1970s.

The 2021 mayoral race marks the first time in the city’s history that no white men are in serious contention.

We’re offering L.A. Times subscribers first access to our best journalism. Thank you for your support.

“All these ladies running is letting the girls know anything is possible, even in Boston,” said Erika Butler, who runs a girls leadership program in the city and identifies as a woman of color. Butler brought three teenagers to a City Hall event at which Janey raised a flag commemorating Juneteenth. “We’re ecstatic.”

The campaign is also grabbing the attention of women like Sarah Muncey, who brought her two young daughters to canvass for Campbell one hot Sunday morning in the working-class neighborhood of Mattapan.

“Boston is ready to be led by a woman of color,” said Muncey, who is white and the co-founder of a nonprofit dedicated to improving early childcare. “It’s time for a different kind of leadership.”

Many candidates have been been inspired by Stacey Abrams, who was part of a wave of Black women running for office in 2018. Although Abrams narrowly lost her bid for Georgia governor that year, she later led a voter registration drive that contributed to Democrats’ breakthrough victories in the traditionally red state’s 2020 presidential and Senate elections, delivering Biden’s win and flipping the Senate.

By far the highest-profile breaker of barriers has been Kamala Harris, first as a presidential candidate and then as the first woman, first Black American and first Asian American to become vice president.

“Her victory around becoming vice president, watching her as a candidate for president, inspired me to say, ‘What are you waiting for?’” said Campbell, who campaigned for Harris in Iowa while she was seven months pregnant.

“We can’t continue to be decisive votes in elections and not get a return on the investment in … seeing ourselves as elected leaders.”

Of course, women of color seeking elective office face enormous obstacles and remain grossly underrepresented in politics and government. Women of color also have a harder time than white men raising money and overcoming voter preconceptions that they are not as “electable.”

But the numbers keep growing. A record number of Black women ran for Congress in 2020 — 130, up from 87 in 2018, according to the nonpartisan Center for Women and Politics at Rutgers University. Fewer Latinas and Asian American/Pacific Islander women ran — 75 and 41, respectively — but they too hit their highest levels ever.

The Democratic Party has long relied on Black women to sway tight races. An especially dramatic illustration came in 2017, when party leaders and national media spotlighted the role of Black women as voters and activists in delivering a surprise victory to Democrat Doug Jones in Alabama’s special Senate election. In the 2020 presidential election — as in 2016 — Black women were the most reliable Democratic voting bloc: 90% voted for Biden, according to exit polls.

“What’s come out of 2020 was a chorus of people thanking Black women for saving democracy,” said Glynda Carr, president of Higher Heights For America, a national PAC that supports Black women candidates. “We can’t continue to be decisive votes in elections and not get a return on the investment in … seeing ourselves as elected leaders.”

One glaring void: There are no Black women senators. After Harris became vice president, California Gov. Gavin Newsom appointed Alex Padilla, a first-generation Mexican American, to replace her and has since pledged to appoint a Black woman if Sen. Dianne Feinstein retires before the end of her term.

Aimee Allison, founder of She the People, an organization promoting women of color in politics, argues that Democratic leaders have not done enough and is urging them to endorse Black women candidates in key Senate races in 2022. Two are running for an open Senate seat in North Carolina; another is running in Florida.

Rep. Karen Bass (D-Los Angeles) said she was confident that Democratic leaders would do so and predicted, “By the time the next election happens, we will have one or more Black women in the U.S. Senate.”

Another big void: No Black woman has been elected governor. Two tried this year in Virginia, but both were crushed in the Democratic primary by former Gov. Terry McAuliffe, a white man.

That could change in 2022. In Georgia, Abrams is expected to launch another bid for governor. In South Carolina, state Sen. Mia McLeod, a Black Democrat, is running for governor, although that is a long shot in the GOP-dominated state.

While women of color have struggled to break into executive positions like president and governor, some have found a proving ground in running big cities. Among the nation’s 100 largest cities, eight have Black women as mayor — up from two in 2014. Three have Latina mayors, and three are run by Asian American women, according to the Rutgers center.

Many of those — including Atlanta’s Keisha Lance Bottoms, San Francisco’s London Breed and Lori Lightfoot of Chicago — rose to greater national prominence as they managed their city’s response to the COVID-19 pandemic.

The top candidates in New York City’s Democratic mayoral primary last week included two women of color. In Los Angeles, no woman — let alone a woman of color — has ever been elected mayor. None has announced a run for 2022, although L.A. Council President Nury Martinez is said to be considering it.

The Boston mayor’s office has been an especially durable bastion of white male power. Even after white residents became a minority in the city in 2000, Boston’s reputation for racism endured. A 2017 national survey of Blacks Americans commissioned by the Boston Globe found that, among eight major cities, Boston was ranked as the least welcoming to people of color. Last month at a Boston Celtics game, a visiting Black player was heckled and nearly hit by a bottle tossed by an angry fan.

In a breakthrough that drew national attention in 2018, Ayanna Pressley, a Boston city councilor, unseated 10-term U.S. Rep. Michael Capuano in the primary to become the state’s first Black female member of Congress.

But the groundwork for 2021’s extraordinary field of candidates for mayor was laid in the transformation of Boston’s 13-member City Council, which gradually shifted to reflect the racial diversity of the city. When Pressley in 2010 became the first Black woman elected to the City Council, 10 members were white. By 2019, council members of color were in the majority, including the four women now running for mayor.

A preliminary election for candidates of all parties — though only Democrats are running — will be held Sept. 14. The top two candidates will face off in the Nov. 2 general election.

Janey got a big boost when she was elevated to acting mayor from her post as City Council president. She was showered with attention for breaking the race and gender barriers.

“Being the first woman and the first Black mayor of Boston does not mean that suddenly racism has disappeared,” she said in an interview after the Juneteenth event, where she appeared with one of the few surviving Tuskegee Airmen. “I am keenly aware that we have more work to do.”

But being mayor has its risks: It thrust Janey into a spotlight, making high-profile, tough decisions. She had to contend with controversy surrounding the city’s police commissioner, who faced allegations of domestic violence. She fired him after a protracted legal fight over her authority to do so.

Wu, who has had a strong showing in polls and fundraising, is an at-large member of the council so has citywide exposure to voters. She won the endorsement of Sen. Elizabeth Warren (D-Mass.), with whom she studied at Harvard Law School.

In an interview after speaking to a group of volunteers in the Boston neighborhood of Jamaica Plain, Wu acknowledged that the city’s parochialism poses a challenge — not just because her parents were Taiwanese immigrants but because she was born in Chicago and did not live in Boston until she attended college. The city has not elected a mayor who was not raised in Boston in almost a century.

“The loyalties and … the divisions in Boston run deep, generations deep,” Wu said. “We need to break down the barriers between communities.’’

Essaibi George is also an at-large member of the City Council and is viewed as the most moderate candidate in a field of strong progressives. She calls herself “pragmatic”; her rivals call her the candidate of the status quo.

“Real progress is made by getting the work done,” she said in an interview. “For the work to be truly successful and meaningful, sometimes it happens in an incremental way.”

Essaibi George said her father scoffed when she told him as a teenager that she wanted to become mayor. “An Arab girl with an Arab name in this city will win nothing,” she said he told her.

Campbell, in part because she was one of the first candidates to enter the race, has vaulted to the front of the pack in fundraising, bringing in nearly $900,000 this year. But she has lagged in polling, struggling to build her profile beyond her home turf of Mattapan and Dorchester.

Some analysts say Campbell may be hamstrung in part because she is competing with another Black woman who has a more visible platform. Yet Campbell rejects the implication that there is room for only one Black woman.

“We’re not a monolith. We each come with our own gifts and skills,” she said in an interview as she prepared to go door knocking in Mattapan. “Black women are not interchangeable.”

Amanda Hunter, executive director of the Barbara Lee Foundation, which conducts research about women in politics, said that Boston’s historic mayor’s race could help break down the “imagination barrier” that hinders voters from seeing women in executive leadership.

“Massachusetts is the original old boys club,” she said. “Seeing multiple women running for office helps chip away those stereotypes.”