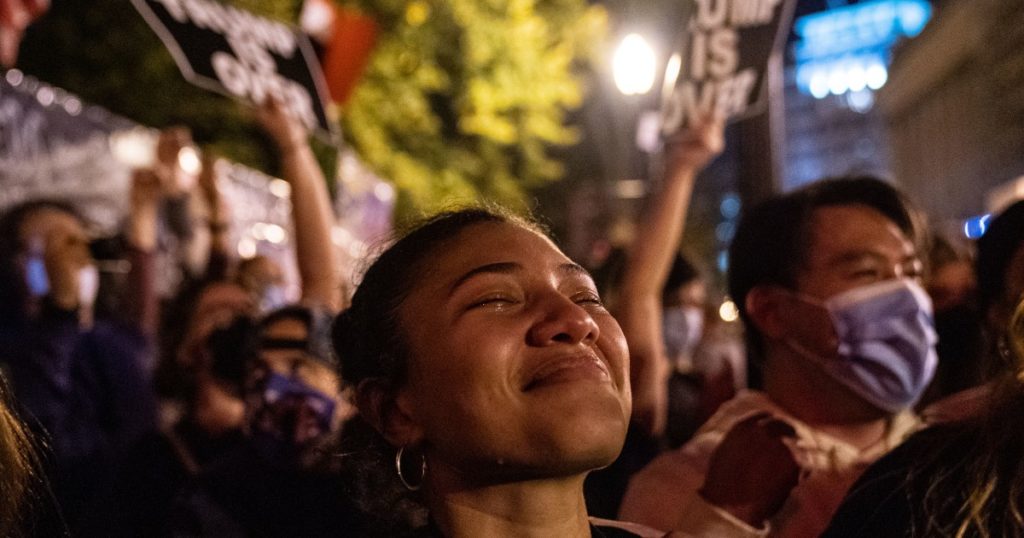 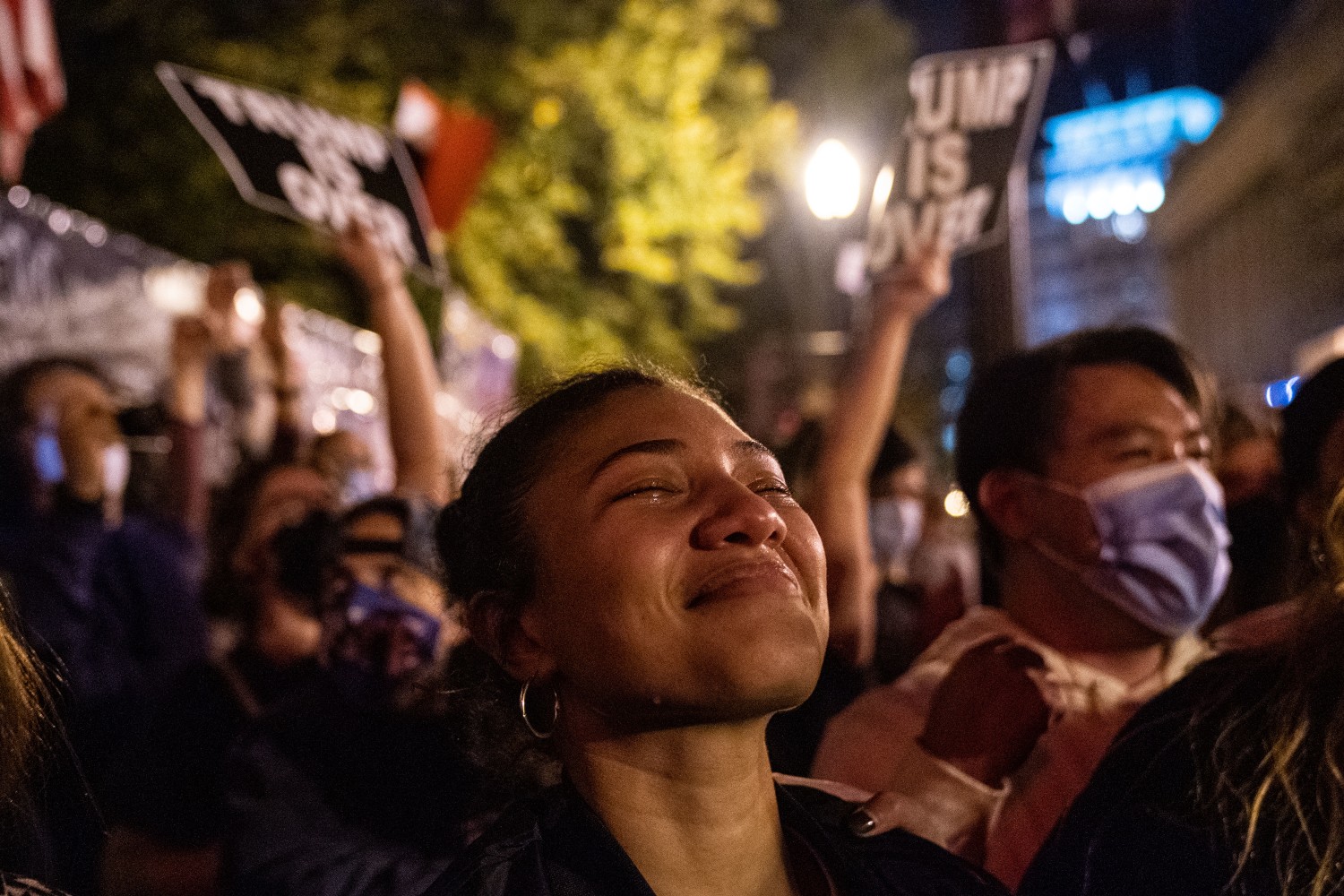 Do you despair about the divisions laid bare in the recent election? Do you worry that our tendency to demonize those who don’t vote the way we do will keep us from moving forward as a country?

I’ve been feeling that way a lot recently — relieved that a message of “us versus them” soon will no longer emanate from our White House but distressed by the failure of our Washington lawmakers to come together on just about anything due to the overpoliticization of just about everything, down to the dangers of this brutal pandemic.

So after the election results came in and I saw that red-blue split and I heard the dire predictions of ever greater governmental gridlock and distrust, I began wondering whether a major national effort could get more of us talking despite our differences.

And as I imagined perhaps signing up to be on a weekly Zoom call, to swap stories about daily life with a farmer from Iowa and an Alabama schoolteacher and an autoworker from Detroit, I began looking around for people who were trying to make such conversations happen.

And that’s when I found myself tilting toward hope — because there are so many projects, from tiny to ambitious in scale, already underway across our great nation to encourage people whose views and votes are different than theirs to listen to and get to know one another. And they are diverse enough to attract a lot of different types who may start out with little more in common than wanting to change the dynamics of our civic discourse.

There are organizations that formed to get people listening to one another in living rooms and coffee shops. There are others that see strength in breaking bread together and sharing life experiences around a table.

Some groups try to gather people to work on a specific national issue or local problem. Others aim solely to facilitate one-time conversations in which participants listen to different points of view and the stories that shaped them and so begin to widen their perspectives.

COVID-19 has made some of these forms of coming together temporarily untenable, but it’s also moved quite a few good conversations aimed at increasing our mutual understanding online.

I found a lot of this work by sampling the websites of the more than 300-member #ListenFirst Coalition. I encourage you to do the same, and maybe feel a little heartened and inspired.

The coalition grew out of Pearce Godwin’s frustration with the political work he’d been doing. He was tired of political vitriol. He was tired of family relationships and friendships being torn apart by political disagreements. He decided he wanted to change the narrative.

Two years ago, Godwin started the National Conversation Project, whose centerpiece is an annual week of deep talking and listening events across the nation. He began assembling the coalition, he told me, when he realized how many similar projects had popped up all over and how much they could gain from borrowing and learning from one another and from combining their voices into a movement.

He defines the objective as “mending the frayed social fabric of America by building relationships and bridging divides,” and told me he sees a chance to reach many more Americans as President-elect Joe Biden stresses conciliation and unity.

“There’s a moment here in which the work of this field could align with the messages coming from the bully pulpit in a helpful and useful way,” said Godwin, who is based in North Carolina.

It was a different sort of moment, by the way, the 2016 election of President Trump, that simultaneously launched the bulk of these groups.

His victory, and his amplification of our divisions, was the catalyst for the San Francisco-based group Make America Dinner Again, started by two friends who realized after they were blindsided by Trump’s win that in their liberal Bay Area bubble they didn’t know anyone who had voted for him.

That’s a big part of the problem, isn’t it? We mistrust and fear one another — we buy into fear mongering — because we don’t know one another, because we don’t live in the same neighborhoods. So much of fear resides in not knowing or trying to get to know and letting our imaginations run wild.

Justine Lee, who created MADA with Tria Chang, said that her discomfort with the ugliness of her own thoughts pushed her to do more than stew, which has led to hundreds of moderated meals — with ground rules that everyone lead with respect and listen — of six to 10 people with very different lives and world views.

“I had this moment of realizing I don’t want to be caught in these feelings of anger and distrust, or close to disgust. I don’t know if I would call it hatred but it was in that realm,” Lee told me. “I thought, what can I do with this? What is something within my control?”

At first, she said it was difficult to locate conservatives and get them to join in. It took a lot of legwork, reaching out to local Republican groups. But then MADA got some attention and people started signing up. Now there are a dozen MADA chapters around the country.

MADA mostly functions right now in a Facebook group, whose members gathered virtually during the election season to watch the presidential debates in small groups together. The dinners, pre-pandemic, were gentle affairs that eased into deep talk. Sometimes the organizers would pair up people from very different backgrounds to work together to prep parts of the meal, Lee told me. As they worked, they’d begin to get to know one another before they sat down at the table for more serious discussions.

Quite a few of the people I spoke to told me they think activity is key to getting people to start connecting. Andrew Hanauer, whose One America Movement concentrates mainly on bringing diverse religious leaders together to work on shared local problems such as strained race relations and the opioid crisis, says the partnerships always start with service projects.

“Before you sit down and talk, you’re painting walls together,” he said. “People build connections when they are doing things together.”

Patricia Carmody of Castle Rock, Colo., who runs an organization called At the Table Colorado , says the ground rules of her gatherings, aimed at strengthening local communities, bar talk of politics or religion.

She’s particularly proud of the friendships formed in her “Common Threads” meetings, when people talk while doing hands-on work, such as knitting or sewing. In the pandemic, they’ve moved on to service projects such as making masks and cards to cheer up people isolated in nursing homes — and now they mostly do their chatting outside, in the parking lot of the closed library where they used to get together.

“There’s no one way that’s right or wrong to get people talking and listening. You just have to do it,” she told me.

I found the extreme version of that idea when I came upon Undivided Nation, the website of David and Erin Leaverton.

In 2018, when the couple decided they wanted a broader perspective on how other people in this country thought, they sold their house in Dallas and loaded their three kids into an RV to spend a year seeking out conversations with their fellow Americans.

In a previous life, David worked on Republican campaigns. He had a job in President George W. Bush’s administration. He was a field director for former Tennessee Sen. Bob Corker.

But he said he grew disillusioned when he saw political disagreements begin to escalate into violence. He didn’t want to be “a part of what’s causing Americans to fear and hate each other.” He’s now taken off his Republican team jersey, he told me. He mainly identifies as an American.

“It was a life-changing experience to step outside of that bubble,” he said of the decision to go in search of a different kind of American story, which the couple told in blog posts and a podcast.

He and his wife met people who described life experiences that completely imploded their long-held views, particularly on the subject of race. They learned what healthcare was like if you were poor, how discrimination stunted people’s lives.

“To hear about issues of inequality and racism, I really didn’t believe before that they were real. Because the America I lived in was an America where all men are created equal and all people have liberty and justice for all. Everyone has a pair of boots so they can pull themselves up by their bootstraps and really the opportunities for success are endless,” he said. “I thought that was the same America that everyone lived in and therefore if you were not doing well, it’s probably your fault. It wasn’t that I was evil. That was just all that I knew.”

Two years later, he’s still trying to determine how to use all his newfound knowledge for good. He thinks it might be to lead small-scale efforts to help companies and communities value everyone within them and open themselves to greater understanding.

His hope, he told me, is that everyone will start to do more of that hard work.

“I think there are a lot of people who are asking, ` Is there another way? There’s got to be another way than this left-right fight to the death.”