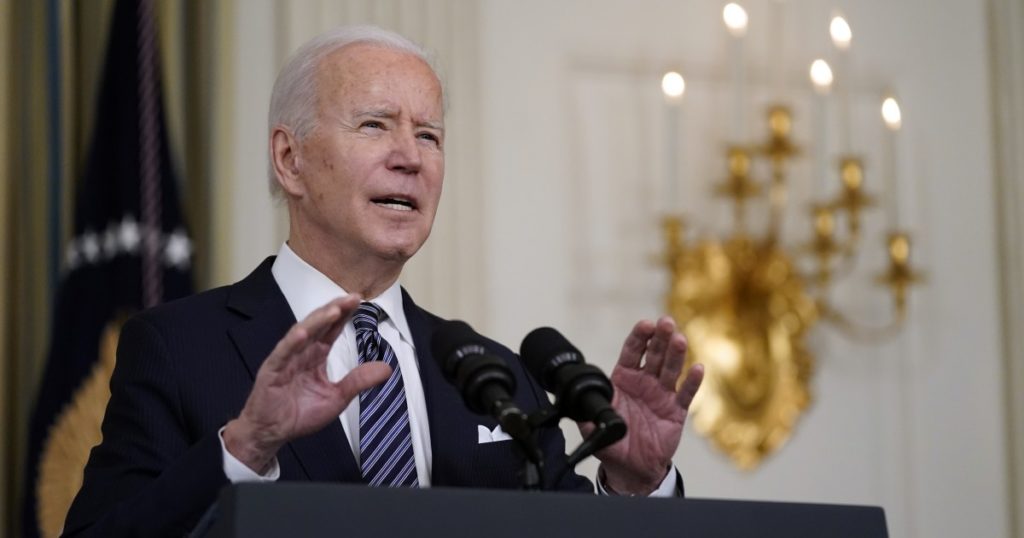 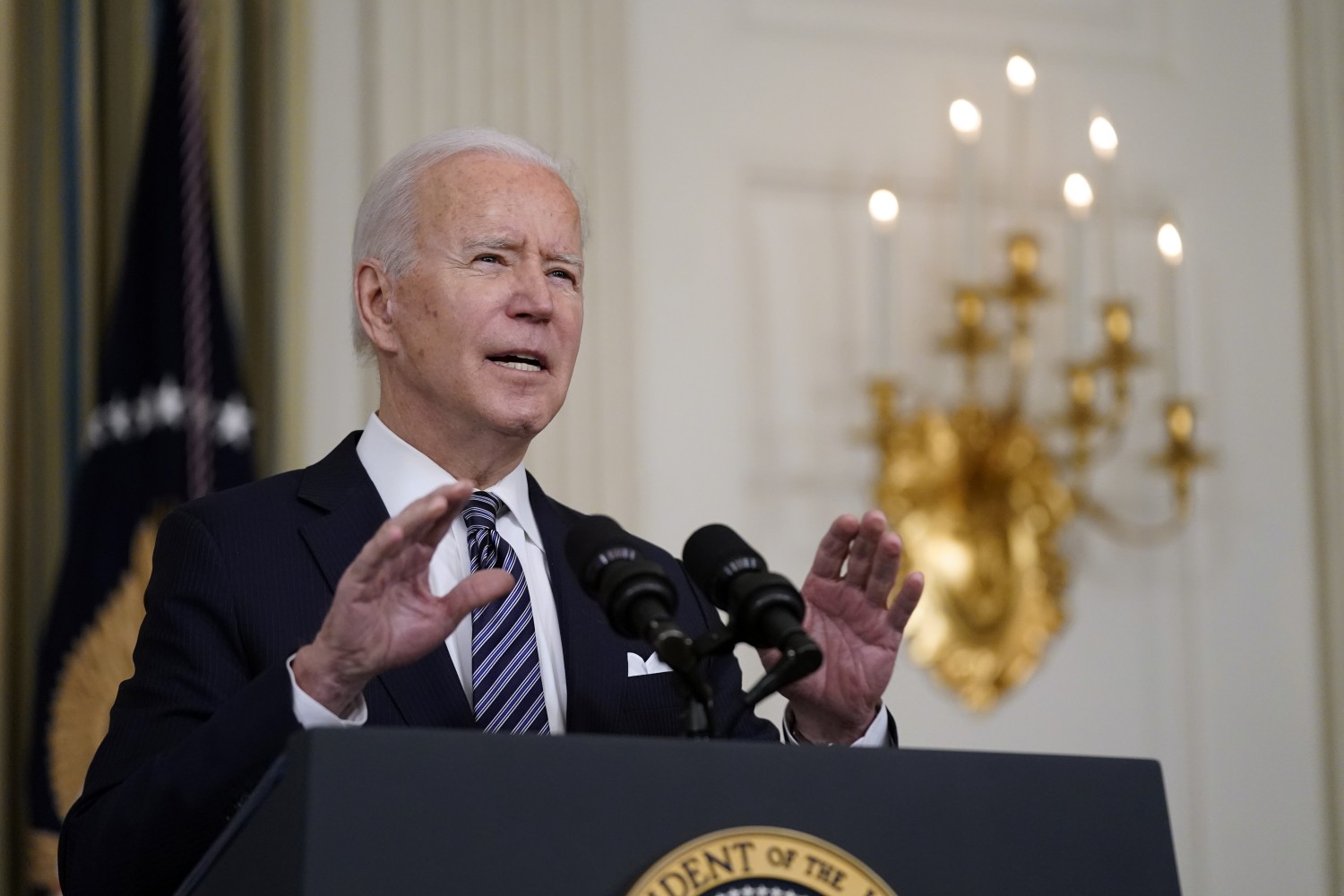 President Biden, saying “help is here, and hope is here, in real and tangible ways,” kicked off a week of high-level administration efforts to tout the benefits of his $1.9-trillion COVID-19 relief package as he seeks maximum political benefit from his first major legislative victory.

The relief package, he added, is “already doing what it was designed to do — make a difference in people’s everyday lives.”

With “shots in arms and money in pockets,” as he put it, Biden is hoping not only for partisan advantage but, more broadly, to restore Americans’ trust in their government. That’s a theme the president is expected to emphasize as he, Vice President Kamala Harris, First Lady Jill Biden and senior administration officials hit the road this week, visiting politically critical states in what amounts to the administration’s first sustained barnstorming tour since the inauguration.

Harris and her husband, Doug Emhoff, began with a trip to Nevada, where they visited a vaccination clinic, food bank and a vegan taco shop. On Tuesday they are to be in Denver.

“We’re all in it together,” Harris told a customer at the Las Vegas restaurant, where a sign outside said, “No shirt, no shoes, no masks, no tacos.”

Later, at a culinary academy, she said the relief bill illustrated what “is supposed to be the job of your government, which is when you’re suffering, when you need a helping hand, when you need a little assistance to get over a moment of crisis you didn’t create — that’s when leaders are supposed to kick in to say, ‘I’m here. I see you, and I will help you.’”

Before taking office, Biden had set the goal of achieving 100 million vaccinations within his administration’s first 100 days — a mark that now appears all but certain to be hit shortly after his 60th day as president.

Americans received roughly 3.2 million shots on Saturday and 2.7 million on Sunday, according to Andy Slavitt, the White House senior advisor for the COVID-19 response, who briefed reporters a few hours before Biden spoke. About 30% of American adults and nearly two-thirds of those older than 65 have received at least one shot.

The primary goal of the week’s events, Press Secretary Jen Psaki said Monday, is to explain to Americans “how they can benefit from the package” that Biden signed into law on Thursday. “When it’s a package of this size, people don’t always understand how they benefit,” Psaki said.

Politics are never far from the surface in such travels, however, as can be seen by the locales Biden and Harris are scheduled to visit. All four states that one or both will visit have Senate races next year.

The Philadelphia suburbs, where the president is scheduled to be on Tuesday, and Atlanta, where the two are scheduled to hold a joint event on Friday, are areas that helped secure the Democrats’ victory in November and remain critical for their hopes of maintaining control of Congress in the midterm elections next year. While those contests remain more than a year and a half away, the COVID-19 package has given the White House an early opportunity to begin cementing voters’ loyalty.

Beyond the immediate political goals, Biden has said several times recently that he sees the possibility of a broader change in American attitudes toward government, reversing the decades-long decline in trust that has dominated politics since Ronald Reagan won in 1980.

“We have to prove to the American people that their government can deliver for them,” Biden said.

Doing that, he added, will require effectively implementing the massive new law. That’s a task he’s handed over to Gene Sperling, a top economic aide to Presidents Clinton and Obama, who will reprise the role that Biden, as vice president, filled in 2009 when he oversaw delivery of the new Obama administration’s huge economic aid package during the depths of the Great Recession.

Biden has said that he believes Obama didn’t do enough to sell Americans on the benefits of the 2009 stimulus law. He’s determined not to repeat that.

In touting the new law’s benefits, however, Biden has several advantages that Obama lacked, which together put a stiff wind at his back: The law starts out with widespread popularity, roughly 70% support in several recent polls. It comes as the economy has already started to show signs of recovery, with unemployment dropping. And Republicans, although they opposed the measure unanimously in Congress, have made little sustained effort to attack it.

Many Republicans argue the bill spends too much and isn’t targeted tightly at those hurt by the pandemic. Some warn it risks igniting inflation.

For now, however, the inflation threat remains only a possibility. Leading economists predict rapid economic growth later this year, with some Wall Street firms forecasting growth rates in excess of 6%, and sharp declines in unemployment.

Amid those forecasts, Republican leaders have mostly tried to change the subject. As Biden spoke Monday, the House Republican leader, Rep. Kevin McCarthy of Bakersfield, led a delegation of GOP lawmakers at the southern border, seeking to highlight the surge in teenagers and other children, primarily from Central America, seeking to cross into the U.S. and claim asylum.

The increasing number of child migrants has rapidly become one of the new administration’s biggest challenges. Officials insist they are applying a “more humane” policy at the border than the Trump administration deployed, but they acknowledge that smugglers have used reports of new, more lenient approaches to convince some would-be migrants that now is the time to try to get into the United States.

McCarthy said the migrant surge, which he referred to as a crisis, was “created by the presidential policies of this new administration.” Biden should be traveling to the border, not to Pennsylvania, he told reporters at the border.

Biden has largely avoided talking about the border problem in public, leaving that to subordinates. Instead, as he did through much of the fall campaign, he has kept his public remarks focused on the pandemic and his relief efforts — demonstrating a self-discipline often lacking earlier in his career, when his garrulous nature could lead him to depart from his script.

Politically, sticking to the pandemic makes sense: The issue remains a top concern for voters, and Biden has enjoyed strong approval from the public for his handling of the crisis.

In Iowa, for example, a state that former President Trump carried in 2020, a new Des Moines Register poll shows residents closely divided over Biden’s overall performance in office — 47% in favor and 44% opposed. On his handling of the pandemic, however, Biden’s support grew to 57%-37%.

“It’s going to be popular,” Democratic pollster Anna Greenberg said. She added that after the last year, in which many Americans believed the Trump administration lacked any coherent strategy to deal with the coronavirus and its impact, voters will respond to “the reassurance that there’s a plan and there’s a timeline.”