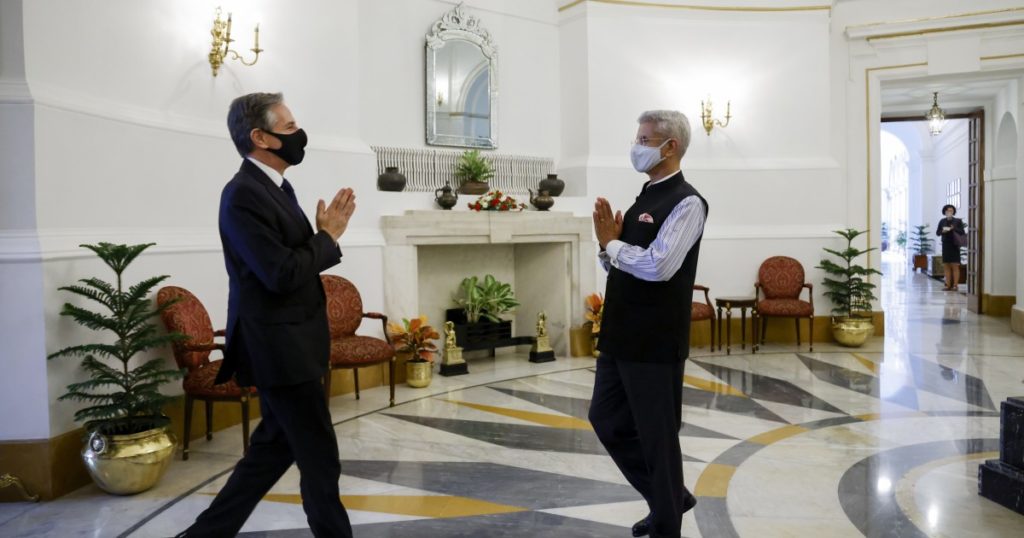 Eric Garcetti is not exactly a household name in India.

The Los Angeles mayor whom President Biden nominated to be his ambassador to New Delhi has raised questions for some Indians about whether U.S.-Indian ties might change after the Trump-era favored-nation status. Administration officials insist India remains a priority and a vital partner.

But few things can match the “Howdy, Modi” rally then-President Trump staged for Indian Prime Minister Narendra Modi in 2019 at a state fair in Houston. Modi responded in kind a few months later with a massive gathering billed as “Namaste, Trump” in India’s Gujarat state. The two regularly heaped praise on each other, even as Modi’s policies on human rights and democracy were criticized as abusive.

Garcetti, as a political appointee, has little expertise in India beyond several visits and a year of college study of two languages spoken here, Hindi and Urdu. He does not have much professional experience in diplomacy, although he has a master’s in international relations and was a Rhodes scholar, and he chairs C40 Cities, a global network on climate change. Traditionally, U.S. envoys to New Delhi are steeped in knowledge of the complex, volatile region or have lofty credentials.

It may not matter.

“Overall, the trajectory of U.S.-India relations has been going steadily upward for two decades,” said Vikram Singh, an India expert at the U.S. Institute for Peace’s Asia Center. The changes in the relationship are more likely to be in form and efficiency, with the substantive issues too big to allow for major shifts in the dealings between the two countries, he said. Those include forming a bulwark against an aggressive China and U.S. requests for assistance on Afghanistan.

The relationship “won’t be performative, as it was with Trump,” Singh said. “It will be much more businesslike.”

Singh noted there were already several touchstones for Garcetti: focus on an enormous city, issues like climate and energy, emerging technologies and the arts.

“It will be natural fit to go from Hollywood to Bollywood and India’s own tech industry,” Singh said.

Garcetti did not immediately respond to a request for comment.

Reaction in New Delhi to Garcetti’s nomination has been subdued but generally positive.

In a leading newspaper, the Hindu, commentator K.V. Prasad took note of “unflattering” assessments of Garcetti on his home turf but added he would be welcome here. He gets high marks for what is perceived as a close friendship with Biden, whom he served as a national campaign co-chair in 2020.

“From the standpoint of India, what is important is that Mr. Garcetti can pick up the phone and talk to the President and the Vice-President when required to move the pieces to provide momentum to the bilateral ‘global strategic partnership,’” Prasad wrote.

Others are more dubious, especially given this delicate moment for India, with a flagging economy, devastation from the pandemic and worries about threats from its neighbors like China and Pakistan.

Since taking office, Biden administration officials have taken pains to reassure the Indians of continued goodwill.

“There are few relationships in the world that are more vital than the one between the United States and India,” Secretary of State Antony J. Blinken said this week as he visited New Delhi and met with Modi and other senior Indian officials.

Biden, Blinken and Defense Secretary Lloyd J. Austin III telephoned their Indian counterparts within days of the inauguration, a sign of the high priority being given the longstanding partnership. India was part of Austin’s first trip overseas as secretary, with both sides keen to enhance military cooperation as defense against China. Vice President Kamala Harris is of Indian descent, and there are numerous Indian Americans in senior government posts.

India and the U.S. share wariness of an emerging China, on India’s northern border and threatening to overpower numerous states in the Indo-Pacific region where the U.S. is focusing its own military and political resources. India also fears a return of the Taliban in Afghanistan, which would work with India’s archenemy, the nuclear-armed Pakistan.

India also is a partner in the so-called Quad, a “security dialogue” involving the U.S., India, Australia and Japan aimed at countering Chinese influence, especially in the South China Sea where Beijing is erecting military bases on the disputed islands of the region.

Blinken spent about 24 hours in New Delhi, and repeatedly stressed the “shared values” of “the world’s oldest democracy” — the U.S. — and the largest — India.

In meetings with reporters, Blinken was asked if he had pressed Modi on human rights. Modi has come under severe international criticism, including from U.S. lawmakers of both parties — though never a cross word from Trump — on several steps he has taken to consolidate power and promote his party’s Hindu nationalist agenda. For example, he pushed through Parliament an act that makes it more difficult for India’s Muslim population to acquire full citizenship, and he has repressed dissidents and opposition news media.

Blinken said he raised these problems while continuing to “celebrate a shared set of values” that underpins the two countries’ democracies.

“We view Indian democracy as a force for good in defense of a free and open Indo-Pacific — indeed, a free and open world,” Blinken said at a news conference, with Indian External Affairs Minister Subrahmanyam Jaishankar at his side.

“We also recognize that every democracy, starting with our own, is a work in progress,” Blinken continued. “We’re at moments when the challenge [to democracy] is painful. It can even be ugly. But as democracies, we deal with it openly. … No democracy, regardless of how large or how old, has it all figured out.”

Jaishankar seemed to hit back, albeit subtly, at Blinken, saying recent policy decisions in India were taken to “right historical wrongs.” “Freedoms are important, we value them, but never equate freedom with nongovernance or lack of governance,” he said. “They are two completely different things.”

Some local journalist organizations and other activists attacked Blinken for failing to take on the Indian government with sufficient force.

It is not yet clear how Blinken’s comments went over with Modi, who takes umbrage at most criticism.

It will be a challenge now left to Garcetti, assuming he is confirmed by the Senate, and it could be a prickly endeavor when he moves into the heavily guarded Roosevelt House in the verdant 28-acre Delhi compound that contains the embassy and other official U.S. properties. Five chandeliers grace the wide entry hallway, where photographs of almost every U.S. president since Franklin Roosevelt, all of whom visited India, line the marble walls.

U.S. ambassadorships can be political plums, with assignments to more ceremonial embassies like those in the Holy See or Paris often doled out as rewards. For Garcetti, the posting to a country like India that plays such a significant and precarious role in international geopolitics will be a complicated test.

Milan Vaishnav, director of the South Asia program at the Carnegie Endowment for International Peace, said many in India have a model for what a good U.S. ambassador should be: He or she has the ear of the president; is prominent in his or her own right, so as to carry a certain cache; and has the need to make a mark on a high-profile stage, which will make him or her enthusiastic about the job.

And for the 50-year-old mayor with aspirations to higher national office, the job will give him a chance to burnish his international credentials, what Vaishnav called the missing piece in his CV.

“Garcetti fits the bill,” Vaishnav said. “Clearly the missing piece in his resume is the diplomatic and international dimension. He’s going to want to prove himself.”

Nirupama Rao, a former Indian foreign minister, also welcomed the Garcetti appointment. She said she was confident the strength of the India-U.S. relationship and its pragmatic imperative will allow the two sides to speak about delicate issues like human rights.

“Both countries, being the complex plural societies they are, have work to do in this field,” she said. “The important factor is that in a durable and resilient relationship such as that between India and the U.S., the two sides have to build habits of listening to each other, avoiding public spats on such issues, and cultivate a constructive dialogue that enables each of them to understand each other better.”

A.K. Merchant, a leader in the minority Bahai community in New Delhi, needed prompting in remembering Garcetti’s name — he knew it was someone from California. Merchant was emerging from a meeting with Blinken where he and other members of the Indian civil society explained the difficulties religious minorities face under the Modi government, one of the challenges awaiting Garcetti.

Special correspondent Parth M.N. in Mumbai contributed to this report.