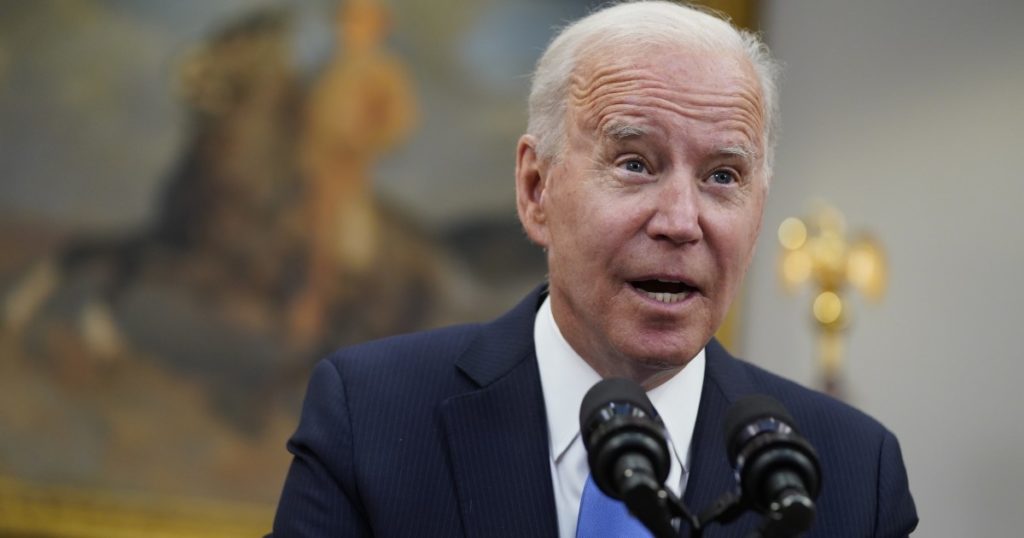 The $6 trillion in federal spending that President Biden will propose Friday in his budget request for the coming fiscal year reflects both ambitious goals for reinvigorating the economy through government action and a head-on challenge to his Republican opponents in Congress.

By seeking billions of additional dollars for new infrastructure, aid to education, help for middle-class families, new environmental programs and a host of other domestic initiatives, Biden promises to ramp up economic growth and make the United States more competitive globally, boost the long-stagnant incomes of most American workers and combat climate change.

And by proposing the largest annual federal budget in constant dollars since World War II, he is laying down a political gauntlet to Republicans who are betting they can obstruct his initiatives and break Democrats’ shaky majorities in Congress in next year’s midterm election.

Biden, speaking about the economy at Cleveland Community College on Thursday afternoon, delivered an impassioned argument in support of the sweeping domestic agenda to be outlined in his budget proposal to Congress for fiscal year 2022, which begins Oct. 1.

“This is our moment to rebuild an economy from the bottom up and the middle out,” the president said, arguing that investments in infrastructure, workers and families will make America’s economy fairer and help the country keep pace with global rivals, China in particular.

He continued to push for his proposals to raise taxes on corporations and the richest individuals to pay for the investments and tax breaks for low- and middle-income households. And he mocked Republicans for opposing those tax increase plans even as they attacked his spending proposals as budget-busters.

“We had no problem passing a $2-trillion tax plan that went to the top 1% that wasn’t paid for at all,” he said, referring to Republicans’ 2017 law that drastically lowered tax rates for corporations and the rich. “But every time I talk about tax cuts for working-class people, it’s, ‘Oh, my God, what are we going to do?’”

Any president’s budget request to Congress is primarily a political document, a fiscal blueprint spelling out the administration’s priorities. Congress invariably reshuffles White House spending plans, sometimes all but ignoring them. But with Democrats in control of the House and Senate, if narrowly, Biden can expect a respectful hearing for his first full-year budget proposal as president, and some success.

He is taking a much more bold and aggressive posture politically than President Obama did. Biden also advocates bipartisanship, but has suggested that if Republicans resist compromise, he will try to pass his program with only Democrats’ votes or take the fight to the voters.

While polls show the popularity of many of Biden’s proposals, pressing his plans without bipartisan buy-in would be a political gamble given the highly polarized electorate.

The president and a relatively few Republican lawmakers continue to negotiate on an infrastructure bill. Yet most Republicans have balked at the far more active role Biden envisions for the government, while raising concerns about the risks of inflation and other economic dangers of increasing the nation’s already large debt.

Under Biden’s budget proposal, the federal deficit for the next fiscal year would hit $1.8 trillion, considerably more than the nonpartisan Congressional Budget Office projected in February, based on current spending and taxes. But it is less than the $2.3-trillion shortfall expected for the current fiscal year or the $3.1-trillion deficit for fiscal 2020 — periods when the economic downturn amid the pandemic, along with the tax cuts President Trump signed into law in 2017, contributed to much-reduced government revenues.

Of the $6 trillion in spending Biden is proposing for next year, more than half is for Social Security, Medicare, Medicaid and other mandatory federal obligations that any president would have inherited. Much of the rest maintains funding for existing military and domestic programs.

Yet Biden’s proposed additions are significant. The spending for infrastructure and social programs, together with tax breaks for all but the wealthiest Americans, would cost roughly $4.5 trillion spread out over 10 years.

Biden’s plan to increase taxes on corporations and the very wealthy would offset the cost of infrastructure and social programs over 15 years, the administration has projected.

Still, in this decade, the U.S. would be facing an unprecedented level of debt. One common measure of fiscal sustainability is debt as a share of the nation’s gross domestic output, or economic output. That ratio was about 80% before the pandemic but hit 100% at the end of last year and would rise to 117% by 2031 under the Biden budget — 10 percentage points higher than what the CBO had projected in February in its baseline forecast.

Economists say that level of debt to GDP would still be manageable as long as the United States, the world’s largest economy, is continuing to grow, the dollar is the world’s reserve currency and interest rates remain very low.

“I would expect a lot of hype and fearmongering about the debt,” said Seth Hanlon, a senior fellow at the liberal Center for American Progress and a former special assistant to Obama on tax and budget issues.

But he noted that, over the last decade, many analysts and economists have come to view past hand-wringing over the federal debt as overdone, and to agree that those concerns should not be a priority at a time of crisis and low interest rates.

“Getting bipartisanship is, all things equal, better than not,” Hanlon said. “But one lesson that was learned from the Obama years, and particularly the drawn-out passage of ACA [the Affordable Care Act] is that the longer you drag it out, the harder it gets.”

Marc Goldwein, senior policy director for the centrist Committee for a Responsible Federal Budget, said Obama also sought policies like universal pre-K and community college education, as well as bigger tax increases, but his proposals were less ambitious and his budget “did tend to take more incremental approaches.”

“I think that the Biden budget is directionally similar to the Obama budget but much larger,” Goldwein said.

The Biden administration’s budget projections are based on its forecast of economic growth of 6% this year, 4% next year and about 2% over the long term. Those are consistent with forecasts made by the Federal Reserve and many private-sector economists.

Biden’s budget also assumes continued low inflation and interest rates. But some economists, including Obama-era Treasury Secretary Lawrence H. Summers, have warned about the risks of rising prices given massive federal spending and the pent-up demand and excess savings from the pandemic.

“It sounds like a budget that could cause inflation to heat up despite their forecast not going appreciably above 2%,” said Chris Rupkey, chief economist at FWDBONDS, a financial market research firm.

“The optics of a $6-trillion number is not great, but the market seems to be looking the other way on this right now,” he added, “and I think part of the reason for that is we’ve already been given $6 trillion worth of plans from the Biden administration.

“The market already knows and is comfortable with a $6-trillion number. And the way the relationship is going between the White House and Congress, the Biden administration is going to need a lot of luck in seeing this budget through fruition.”

Economist Mark Zandi of Moody’s Analytics said that he expects that Biden will eventually come away with a $2.5-trillion package of new spending on infrastructure and social programs, plus tax credits, over 10 years — not $4.5 trillion. And instead of $3.5 trillion in higher taxes over the decade, Zandi expects about $1.5 trillion will end up as law by year’s end.

“This budget is aspirational. It’s laying out a blueprint for the administration’s objectives, goals and how to get there,” Zandi said. “So they don’t expect to land on Mars, but they are going to propose and go to the moon.”