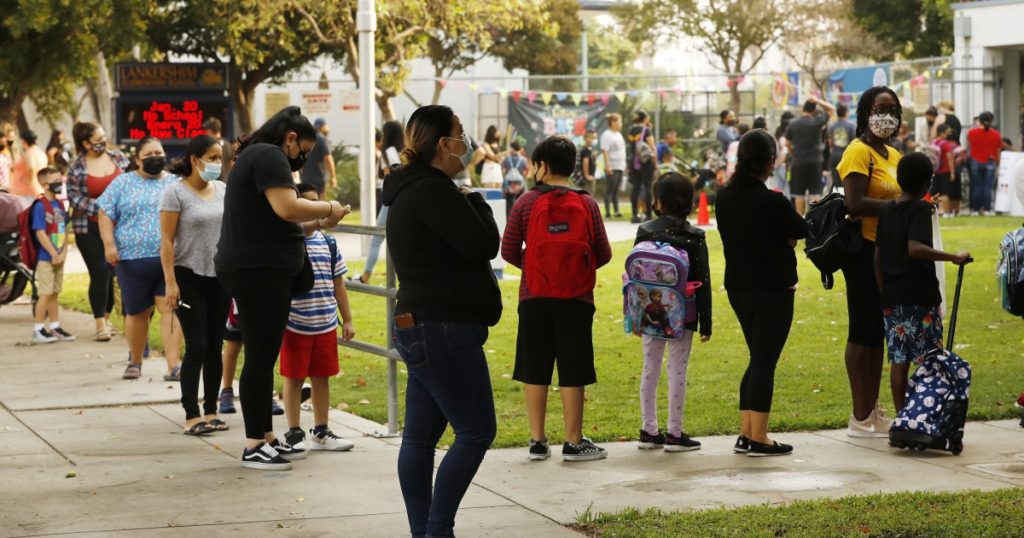 Almost since its inception, the effort to oust Gov. Gavin Newsom has been inextricably tied to the pandemic’s impact on schools. Recall backers say they succeeded in qualifying for the ballot in large part because of mothers’ frustration with closed classrooms and their children’s struggles with virtual learning.

Now, as recall ballots are dropping in mailboxes, children are returning to school amid heated battles over mask mandates and skyrocketing cases of the highly transmissible Delta variant. Leaders of the effort to remove Newsom for office are confident that women, exasperated by the effect of Newsom’s policies on their children, are the reason they will prevail.

“It’s gas on the fire,” said Anne Hyde Dunsmore, campaign manager for Rescue California, one of the main recall groups. “The whole time, it’s probably the single biggest ingredient in the campaign, in our success.”

Newsom and his allies agree that these women are critical, but they point to polling that shows that well over a majority of the state’s women approve Newsom’s handling of the pandemic. If these women turn out, they will be a major factor in helping the governor retain his job.

“Non-Republican women are key targets in our field and voter mobilization efforts,” said Nathan Click, spokesman for the anti-recall campaign.

Interviews with women in the Stockton area reveal widespread unhappiness with school closures last year, regardless of party. But whether they hold Newsom responsible varies.

Sonia Mesa considered not sending her 9-year-old son back to school when it reopened earlier this month because he’s too young to be vaccinated and COVID-19 cases are surging in the region.

The Amazon warehouse worker decided she had to let him go because he had grown depressed while learning from home last year. The closure of schools is a concern commonly cited by backers of the effort to recall Newsom. But Mesa, a Democrat, said the governor should not be held responsible.

“I think he’s kind of doing the best he can with the information he has,” said Mesa, 38, who lives in Stockton.

Tami Stone was angry when Newsom’s children returned to in-person learning at a private school last fall while all public schools stayed shut for months. Her 13-year-old was deprived of a year of learning, she said.

“If he really honestly believed what he’s feeding us, then he would be doing the same. He’s not,” said Stone, a Republican and the owner of Jazzercise studios in Stockton and Lodi.

Elizabeth Perkins’ three children are back in school, but she cannot forgive Newsom for policies that shut down schools for much of last year.

“I think a lot of what he did was not necessarily for his constituents, it was to further his own political aspirations,” said Perkins, 46, a small-business owner and registered Republican. “I feel like there was no science that was followed, and it was really shameful that kids had to be socially ostracized from one another.”

Stone, who celebrated her 51st birthday with Perkins at lunch in downtown Lodi, is worried that the lost learning will be a competitive disadvantage for her son when he applies to college.

“If literally the whole entire world was shut down, then we’d be all on the same level playing field, but we’re not,” Stone said. “California kids missed a year of education and we’re going to be behind.”

As schools reopen, testy protests over the state requiring students to wear masks have taken place in communities such as Danville, Palos Verdes, Tustin and Vista. Orange County education officials unsuccessfully sued Newsom over the mask mandate. An Amador County teacher was punched in the face by a father upset by seeing his daughter emerge from elementary school wearing a mask.

That level of vitriol has not been seen here in San Joaquin County, a historic agricultural hub and longtime Republican-leaning bellwether that has grown more Democratic with an influx of residents from Sacramento and the Bay Area who are seeking cheaper housing. But there have been heated exchanges about mask requirements.

On Aug. 10, the same day that the county’s public health officer warned that COVID-19 rates were rising, and that hospitalizations and death would as well, the county Board of Supervisors voted 4 to 1 to adopt a resolution urging state officials to leave mask decisions to parents and school districts. The board chair and vice chair falsely warned that children wearing masks risked facial deformities, protruding ears, acne, breathing difficulties and higher levels of carbon monoxide in their blood.

“It’s not responsible. Their job is not only to teach the kids but also make sure that they’re good physically and mentally,” said the former elementary school librarian whose two children graduated from Lodi schools and are in college.

The Democrat blames former President Trump’s response to the pandemic.

That’s why the North Stockton resident plans to vote against the recall, because she feels Newsom has done his best during an unpredictable once-in-a-lifetime pandemic.

“He’s done a good job, considering the circumstances that you have half of our state refusing to wear a mask, and people going to school board meetings and snatching masks off teachers’ faces and yelling crazy conspiracy theories,” she said.

Mesa agreed. She said she wears a mask for 10 hours a day at work.

“Yes, it’s uncomfortable, it’s irritating, but I wear it,” Mesa said. She added that she tells her son, “Just make sure you wear your mask. Don’t take it off. And if you’re around other kids who take it off, make sure you move away if you can.”

At every event, interview and in many ads, one of Newsom’s first talking points is aimed at women like Mesa and Gallardo.

The Republicans running to replace him “all support eliminating mask mandates in our public schools, eliminating vaccine verifications,” Newsom said in a recent interview on ABC7 News in San Francisco. “The leading candidate Larry Elder says he’ll do that Day One.”

In a debate last week, former San Diego Mayor Kevin Faulconer, Assemblyman Kevin Kiley (R-Rocklin) and businessman John Cox all said they would roll back Newsom’s requirement that school employees be vaccinated and students wear masks. There were slight variations in their approaches: Faulconer would leave such decisions to local officials, Kiley wouldn’t allow them to issue such mandates, and Cox said he would allow local officials to require masks but might not allow such local authority for vaccines.

Any of these approaches would be an improvement for Amy Fritz, a grandmother of three school-age children. When they were out of school last year, she said, they struggled with virtual education, a situation she blames squarely on Newsom

“I don’t want to see his face. I don’t want to hear his voice. I can’t stand him,” said Fritz, a retiree who lives in Lodi. “He was way too strict. I think it was a power thing.”

Lessie Tanson, had the exact opposite reaction as she shopped with her 11- and 4-year-old granddaughters at Target in Stockton. Daisy is starting seventh grade while Abigail is entering pre-kindergarten.

“I’m a little leery about it, because we don’t know exactly who has been vaccinated,” said Tanson, 78. “I think it’s a great idea that everyone wear masks, whether they are indoors or outdoors.

“If you feel that you can help somebody else out or stop somebody else from being sick, I think it’s just our duty to do that as human beings,” she said. “And so I’m all for the governor and the actions that he has taken so far.”