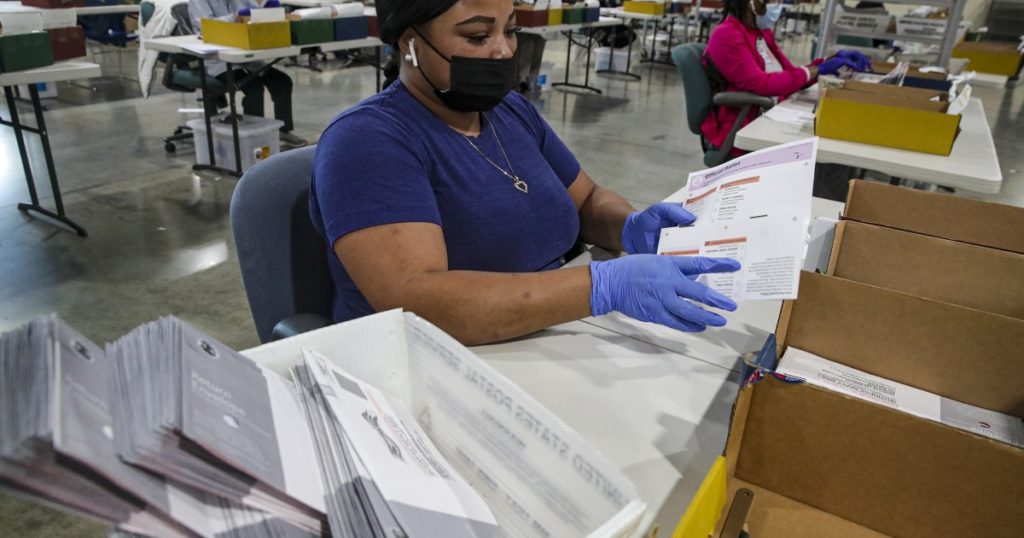 Matt Francis is certain Gov. Gavin Newsom is about to be recalled — he’s worked to make it happen for months, and from online commentary he’s seen in recent weeks, he senses that Californians want a new leader.

But if the recall fails?

“There is no way I am going to believe it,” he said, standing inside a pro-recall booth Wednesday during a rally at the state Capitol opposing vaccine mandates.

Though there are few proven instances of wide-scale voter fraud nationwide, the “big lie” of stolen elections is thriving in California, nurtured by tea party conservatives, put on steroids by former President Trump and most recently repeated — without evidence — by Fox News commentators talking about Tuesday’s recall election.

Ballots in the California recall election have yet to be counted, but Francis is hardly the only conservative forwarding claims that only ballot rigging will allow Newsom to retain office.

Some recall campaign leaders fear that mistrust could backfire on their cause by discouraging conservatives from casting ballots. The short timeline of the special election, wildfires and the pandemic have left some counties with fewer options for in-person polling places, making it imperative for the movement to recall Newsom to turn out its voters by any means possible. But fraud rumors are especially prevalent around mail-in ballots.

Claims of election corruption may spark litigation after Tuesday’s election, especially if Newsom retains office. Yet whether any lawsuits gain traction, experts say that allegations of ballot rigging help Trump-friendly forces build their base, in California and elsewhere.

They feed the narrative that California has left people behind, and that American democracy can be protected only through extraordinary means — including the protests that led to the Jan. 6 insurrection at the U.S Capitol, said Brian Levin, executive director of the Center for the Study of Hate and Extremism at Cal State San Bernardino.

Though Dunsmore herself has been at the heart of unsuccessful pushes to root out voter fraud in past elections (and was registered to vote in both California and Florida at one time), she has not seen any signs of fraud this year, she said.

A Times investigation found that an organization led by Dunsmore, the Institute for Fair Elections, challenged thousands of ballots in past years, claiming they represented potentially illegal votes, though investigations by election officials found most were legitimate ballots or unintended errors.

Those kinds of challenges — often searching for dead voters, those who have moved or those suspected of voting more than once — for decades have been at the heart of conservative conspiracy theories that paint Democrats as stealing elections, often with the help of immigrants in the U.S. illegally.

During the recall campaign and with the advent of universal mail-in ballots, those myths have grown.

In recent weeks, videos have surfaced purporting to show hundreds of ballots being stolen from mailboxes. Facebook forums are packed with worried posts about holes in ballot envelopes that fraudsters could use to find pro-recall votes (but which actually serve a dual purpose of allowing blind people to know where the signature line is and giving election workers a way to ensure the envelope is empty before discarding it).

Some of those conspiracies have targeted local officials.

In Sacramento County, the registrar of voters, Courtney Bailey-Kanelos, was accused of having two employees of election equipment maker Dominion Voting Systems working for her. The man who made the claim had toured her offices and made the allegation while speaking at a conference sponsored by “My Pillow Guy” Mike Lindell, a national leader in vote fraud conspiracies.

Since then, Bailey-Kanelos has been deluged with angry calls, emails and Public Records Act requests about any communication with Dominion, including one tweet claiming that if Newsom wins, it will be because of Dominion fraud in her office, she said. The onslaught prompted her to put out a news release denying it.

“The frustrating part is we put out the release, we say this isn’t true, and it doesn’t matter,” she said. “Even though it’s not true, the message doesn’t get across.”

Now, she has election observers watching her office process mail-in ballots nearly every day. They have challenged the signatures on about 30 to 40 ballots so far. It is a manageable number and she welcomes the scrutiny, she said, but “there is a fine line between observers and disrupting the process.”

Recall organizers are deploying hundreds, if not thousands, of volunteers to examine mail-in ballots and work at the polls, Dunsmore said. Their observations are being collected by the state GOP and organizations including the Election Integrity Project California, founded by a tea party conservative, which has used such reports in the past to sue state and local election officials.

Jessica Millan Patterson, chairwoman of the California Republican Party, said it has trained 1,100 poll watchers as of Thursday and will have 115 election lawyers on call in a ramped-up effort to “keep sunlight” on the process. In addition, the party has a website where suspected voting fraud can be reported, which Patterson describes as a place to house “any evidence that may be used at a later time.”

“I don’t know if there is fraud or not,” she said. “We are not messing around.”

Poll workers, though required to be nonpartisan on the job, can “see where the kinks are” and monitor others’ conversations and the handling of ballots, Dunsmore said. Their observations may later become fodder for possible legal challenges — which can further fuel conspiracies regardless of how courts rule.

“Everybody has lawyers ready to go,” she said.

Thomas W. Hiltachk, a longtime election lawyer whose firm represents the California Republican Party, said paranoia about election fraud may stem from common errors by election officials, such as sending ballots to incorrect addresses. Such mistakes can be construed by some as evidence of fraud.

“Does that mean there is a massive conspiracy to win the election?” he asked. “No. It is election incompetence. When you have incompetence, it leads people to think that something is amiss.”

Recall organizer Stephanie Suela, also a volunteer for Election Integrity Project California, is one of those keeping tabs on ballots. She has “eyes on” a drop box at a library in Sacramento, she said, and plans on following a polling station worker in her car to ensure ballots are properly dropped off at county offices. She said she is hopeful for a fair election but has concerns.

“As much as I’ve worked this recall, if [Newsom] doesn’t go, I’m going to question it,” she said.

Harmeet Dhillon, a San Francisco lawyer and a member of the Republican National Committee, said she is withholding judgment on fraud prior to the election but is also keeping tabs on alleged voting errors.

Dhillon also has heard another conspiracy theory that’s especially powerful in conservative circles — that some polling places have signs saying voters must show proof of vaccination against COVID-19 before entering — reports that have not been substantiated and would probably represent an illegal hindrance.

She does not rule out a challenge if the election is close and her evidence indicates it was marred. “Let’s see what happens,” she said.

Experts on politics and extremism warn that unfounded fraud claims, lasting for months or even years after the vote is certified, threaten to undermine confidence in elections and could provoke violence, as in the Jan. 6 Capitol insurrection.

Thad Kousser, co-director of the Yankelovich Center for Social Science Research at UC San Diego, said the ongoing push by some conservatives to claim election fraud before the results are even known is “the most damaging trend we’ve seen in our democracy.”

He said that a close vote tally, or a “nightmare scenario” of late-counted ballots flipping the win toward Newsom, could turn dangerous.

“The miracle of American politics is that we have managed to keep these fights primarily in rallies, elections and debates on the floor,” he said. “The worry is always that they will move into violence.”

Fox News host Tucker Carlson has already warned that a Newsom victory will mean there has been election fraud, Trump told a Newsmax host this week that the race is “probably rigged,” and gubernatorial candidate Larry Elder is asking supporters to report “anything suspicious” when it comes to voting.

The unfounded rhetoric of fraud around the recall election may be an “opening salvo” in what probably will become another “quiver” in the bag of right-wing attacks on election integrity, said Levin, the Cal State San Bernardino researcher.

Increasingly, Levin said, those grievances are focused on state and local issues after the 2020 election, feeding disputes at school boards, city halls and election offices. It is in those venues where he fears there may be violence if Newsom retains office.

Bailey-Kanelos, the Sacramento County registrar, is worried that the risk of violence will grow if votes take too long to count. She expects coming days to be “tough on election officials,” she said, as they work to ratify vote tallies — a process that could take longer than normal because of the need for caution and documentation to avoid allegations of fraud.

But, she added, “I haven’t been told I should be executed for treason in months, so I think we are doing OK.”