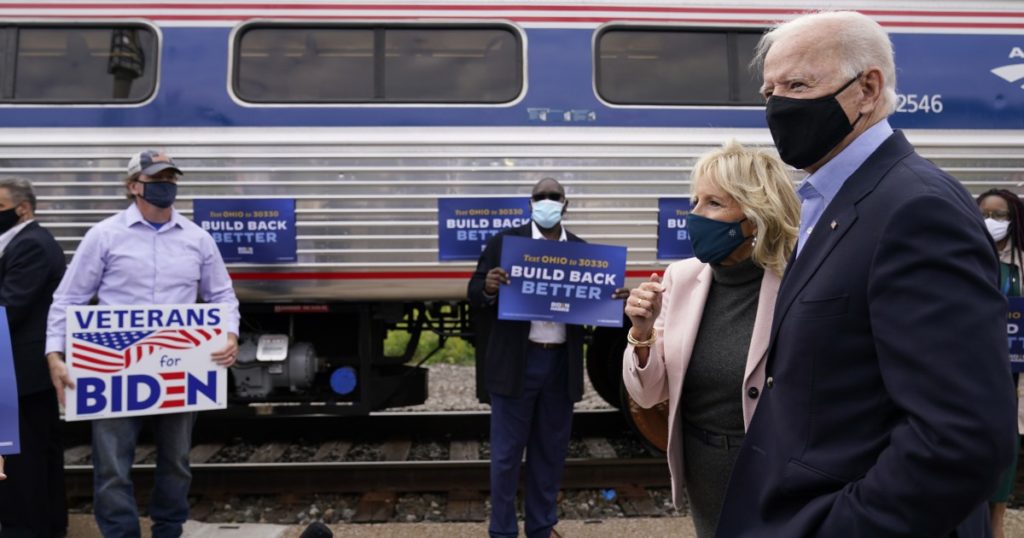 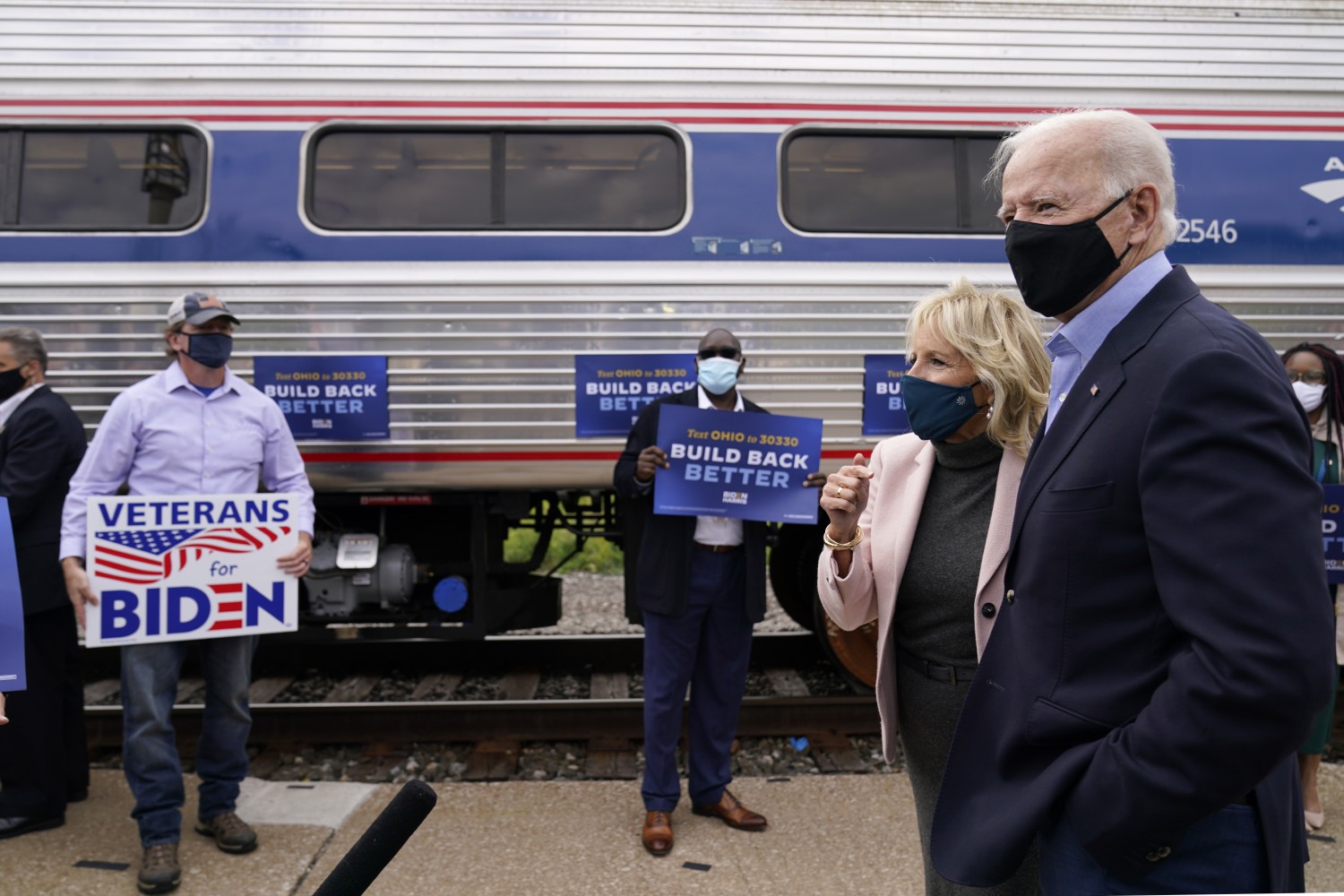 President-elect Joe Biden is a self-professed train fanatic who estimates that he has ridden more than 2 million miles on 16,000 trains. This fall, he rode the rails to campaign across Ohio and Pennsylvania, part of the “Build Back Better” train tour.

For months, some supporters of California’s troubled high-speed rail project have pined for a Biden presidency, hoping his administration would throw its support behind the planned system between Los Angeles and the Bay Area, with trains running at 220 mph.

But while state officials anticipate more peaceful dealings with the new administration, nobody expects an imminent bailout. Some doubt that the president-elect will make investment in high-speed rail a priority.

“Biden is a fan of the typical Amtrak route, which is akin to our Metrolink or the Amtrak service in the Central Valley,” said Ara Najarian, a board member of Metro and Metrolink. “High-speed rail is a question mark. I don’t know he would go that far.”

California’s high-speed rail endeavor, launched in 2008 when voters approved $9 billion in bonds, faces daunting challenges. It has a funding shortfall of $80 billion. It may run out of money even to complete a 171-mile starter system between Bakersfield and Merced by 2028, as Gov. Gavin Newsom has proposed. The project still lags in acquiring needed land and has encountered problems building bridges.

Even under a friendly Biden White House, California would need to signal a stronger commitment to fund the project and resolve many thorny issues it has avoided, such as a plan to subsidize the service in violation of state law, experts say.

And ultimately, the state needs to come up with a credible plan to connect Los Angeles and San Francisco, not just build an isolated starter system in the Central Valley, as it is now doing.

But with the stroke of a pen, Biden officials could reverse some of the punitive actions that the Federal Railroad Administration took against the project over the past year.

Brian Kelly, chief executive of the California High-Speed Rail Authority, is careful not to set expectations too high, though he has already been in contact with members of Biden’s transition team, including Phil Washington, Los Angeles’ Metro chief.

“I am encouraged by the opportunity to have a functional partnership,” Kelly said.

As for more money, Kelly said there is the possibility of “public help” and private participation down the road. “We are at the end of a tough beginning,” he said about the project’s status.

The American Society of Civil Engineers — founded in 1862 — wants the federal government to focus on decay in existing highways, bridges, rail systems, tunnels, dams, sewers, airports and other essential civil works. The organization notes that more than 40% of buses and 25% of rail transit hardware are in marginal or poor condition.

President Trump was not an immediate enemy of the California project, but over the last two years, his administration became hostile. Earlier this year, the Federal Railroad Administration terminated a $929-million grant issued in 2010 by the Obama administration, saying the rail authority had failed to comply with a requirement that it make “reasonable progress” in building a bullet train between Los Angeles and San Francisco.

The state filed a lawsuit, which is pending. Kelly said he looks forward to a resolution of the suit.

“I would guess that the $929 million in the fiscal 2010 grant would be re-obligated,” said Louis Thompson, a passenger-rail veteran who chairs the state-appointed peer review panel.

Exactly how the Biden team would restore the grant is unclear.

The fact that the state’s suit alleged that the termination was arbitrary and capricious may ease the restoration of the funds, compared to a negotiated administrative procedure, said Eloise Pasachoff, a law professor specializing in federal grants at the Georgetown University Law Center.

The Transportation Department did not appear to file a motion to dismiss the suit or slow the proceeding, she added, so “a settlement could indeed involve reinstituting the grant.”

The other key step that Biden could take is relaxing construction and environmental clearance deadlines set under a $2.5-billion grant issued in 2009 under the Obama stimulus program. It required that the state build 119 miles of structures and track, as well as complete all environmental reviews from San Francisco to Los Angeles by 2022.

Although Kelly said it is not yet clear whether the project will need a relaxation of the deadline, industry officials and analysts say the project has an almost impossible job in trying to complete the track installation, given that many bridges, viaducts and other structures have not even begun construction.

If Republicans retain control of the Senate, a possibility that will not be settled until January, any direct help to the California project is doubtful. Senate Majority Leader Mitch McConnell (R-Ky.) is married to Transportation Secretary Elaine Chao, who helped lead the Trump battle against the California project.

A Transportation Department spokesperson said Tuesday that the department was willing to work with the state over the last seven years but that the state “consistently failed to meet its obligations and milestones” under the grant agreement and federal law. The department, the person said, responded with “appropriate corrective actions as steward of taxpayers dollars to keep it from being a complete boondoggle.”

Even with a Democratic-controlled Senate that would back a big infrastructure spending package, California would have to compete with 49 other states for money and would have to decide how to prioritize its share among many important transportation needs.

“Prospects for some financial participation by the federal government are better than they were, but it is easy to overestimate them,” said Martin Wachs, an emeritus professor at UCLA who is an expert in transportation. “There could be a few billion dollars, but it would not eliminate the need for the state to put the project on a sound financial footing.”

Wachs and others have long argued that California needs to show a stronger long-term commitment to the project with a funding plan that shows it can eventually connect the Central Valley construction to the state’s urban centers.

In their last year, officials in the Obama administration took tough steps to tighten control of the project, even as the rail authority dismissed their warnings of cost overruns.

Biden’s selection of Washington, the Metro chief, to head his transition team for transportation has raised hopes that California has an “in” with the new White House. But Washington has made a career in urban mass transit.

Indeed, many Democratic legislators in California have already called to slow spending on the Central Valley bullet train and redirect funding to Southern California and the Bay Area, where there is greater public need for transit. And Democrats have prioritized education, housing and healthcare over everything else.

“It is impossible to forecast if there will be additional [bullet train] funding and the size of it,” Richard said. “You can’t ask for a pot of money without saying, ‘This is what it will deliver.’”

He notes that Biden supports a big stimulus that would include infrastructure and is a known fan of Amtrak. “That doesn’t necessarily translate to the California high-speed rail,” he said. “Amtrak needs a big infusion for repair and modernization.”

The key question is how much California’s powerful Democratic leaders, including Rep. Nancy Pelosi, Vice President-elect Kamala Harris, Gov. Gavin Newsom and Los Angeles Mayor Eric Garcetti, who is being considered for a cabinet post, will invest in high-speed rail.

As the project has endured delays, technical setbacks and cost overruns, they have publicly said little or nothing on the matter.