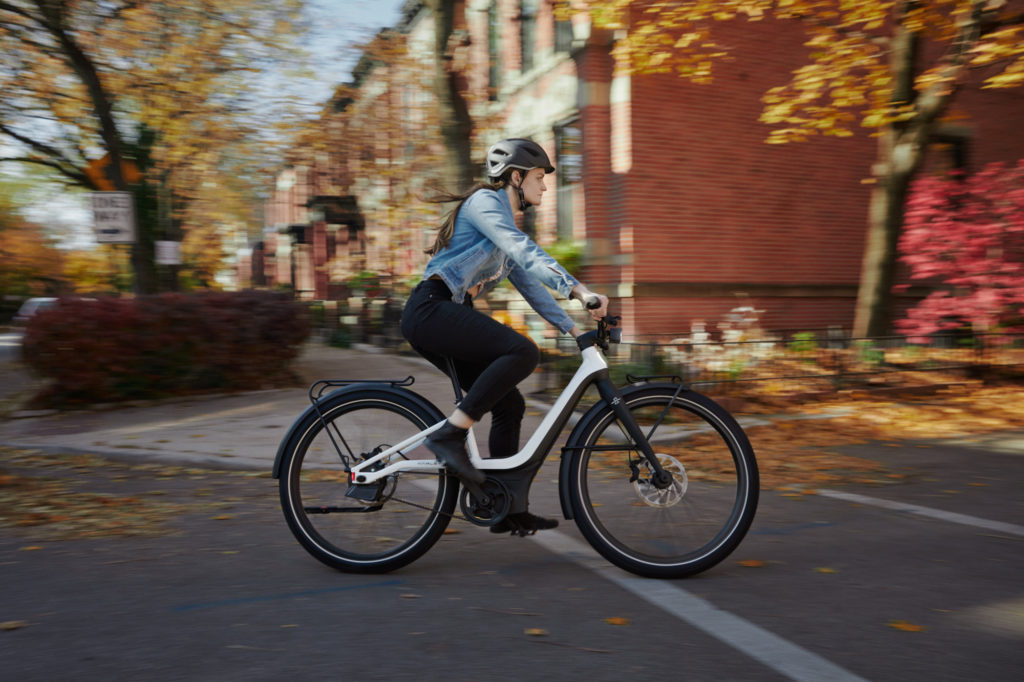 America’s best-known motorcycle brand is now selling e-bikes — and reigniting a conversation about the changing role of automotive options beyond cars on U.S. roadways.

Harley Davidson recently unveiled a line of electric cycles under the Serial 1 moniker, after announcing in October that it would launch a brand exclusively devoted to pedal-assist vehicles.

The bikes — named for the “Serial Number One,” a 1904 Harley prototype that was more of a standard bike with a gas-powered motor attached than a true motorcycle — trade familiar features like greasy chains for carbon-belt drives and manual derailleurs for an automatic-shift drivetrain. The company hopes that such features, and an uncomplicated, non-sweaty ride, will attract consumers who otherwise might not try an e-bike or even ride a bicycle.

Some of the line’s bikes even include features more typically associated with cars, such as lockable glove compartments and tail lights that brighten as the rider slows; the fastest bike in the line, the Rush/CTY Speed, can travel as fast as 28 miles per hour.

“A traditional bicycle company comes at e-bikes from the same kind of athletic performance, spandex-and-lycra perspective with which they approach acoustic bikes,” said Jason Huntsman, president of Serial 1. “That’s why we hear so many folks say, ‘oh, e-bikes are cheating.’ Well, yeah, if you’re racing. But at Serial 1, we actually engineer our bikes from the ground up for someone to ride it without being a cyclist. Harley really owns two-wheeled freedom, and we want to give people the freedom to get out of their cars.”

Harley isn’t the first motorcycle maker to manufacture pedal-assist bikes, and it’s certainly not the only automotive company to attempt to rebrand itself by branching out into active-transportation products. Ducati and Yamaha have manufactured e-bikes for a while, and car companies including Audi, BMW, and Ford have experimented with them, too, prompting concern among some active-transportation advocates who worry that companies with roots in car culture might not share their vision of people-powered transportation.

But that critique may not fit as neatly on the shoulders of a motorcycle company as it does on a traditional automaker.

Motorcycles, which are relatively rare on American roads compared to cars, may have more in common with active-transportation modes than many realize. Motorcycles account for only 3 percent of registered vehicles and 0.6 percent of vehicle miles travelled; fewer than 100 pedestrian deaths a year involve a motorcyclist, whereas motorists kill tens of thousands of walkers annually.

Motorcyclists also may have almost as much to gain from lessening car dependency as traditional cyclists, because as many as 85 percent of motorcycle fatalities occur in collisions with motorists. (The other 15 percent die in single-vehicle crashes.) Thus, a motorcyclist is about 26 to 27 times more likely to die in a crash than a driver or car passenger, even given their comparatively scarcity on U.S. roads.

Seen through that lens, Harley’s pivot into pedal-assist bikes feels consistent with the company’s broader mission to “change how you move” — that is, to shift America’s default mode of transportation away from cars. Representatives from the company says they’re working with federal and state lawmakers in support of spending bills that would build more protected bike infrastructure, and they’re keen to see the adoption of purchase incentives, such as the EBIKE Act.

“Harley as a company has long been an advocate for safe two-wheeled travel, but we’re also advocating for bicycle infrastructure as well,” Huntsman added. “There’s a lot of automobile-to-motorcycle accidents, too.”

E-bikes may become a bigger part of the company’s strategy in the coming years, especially if younger riders’ interest in motorcycles continues to wane. The company is positioning Serial 1 as a standalone business focused solely on e-bikes, their riders, and cultivating roadways that protect everyone on two wheels — saying only that the brand is “powered by Harley.”

At the end of the day, however, Serial 1’s vision for mobility still shares much with the motorcycle giant that sired it — especially when it comes to the mystique of the thrill of the open road. It’s just that on a bike, the “road” goes way beyond the highway.

“When you’re on a Serial 1, you unlock your city,” Huntsman adds. “You’re blowing past car traffic, and even past certain traffic signals. You might go through a city park, through a beer garden, or just down the street to work. If you think about a Harley cruiser, a lot of people envision themselves on a long highway, enjoying yourself in the great outdoors. We want to bring that same freedom of the soul to the e-bike experience.”

Until cars stop choking our communities, that feeling may be hard to come by — and, at north of $3,399 a bike, the Serial 1 may be out of reach for many riders, just like most e-bikes of its class. But it does sound nice.