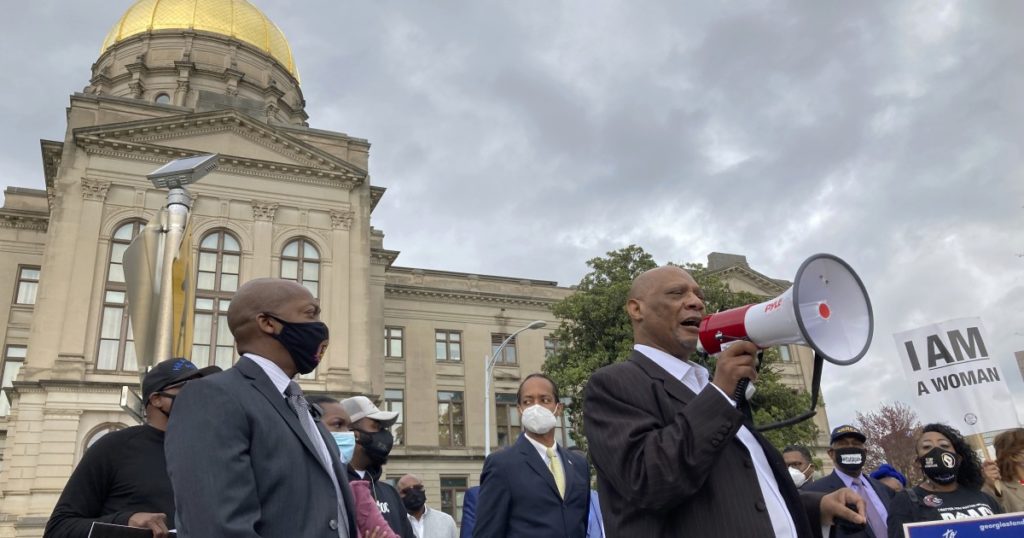 I realize you have many things to cope with at the moment, but you really need to take a stance on Georgia. This time for real, because if you thought past attempts to curtail LGBTQ rights and abortion access were dangers to democracy, the recent passage of new voting restrictions threatens to destroy it altogether.

When Jim Crow is rearing his ugly head again in a state where you do lots of business, you really can’t rely on a few A-listers’ tweets amid your industry’s general silence this time around.

After all that talk of racial justice and inclusion, are you honestly going to let Delta Air Lines, which on Wednesday released a statement condemning the new law, make you look bad?

Two years ago, when the Georgia Legislature passed the draconian abortion bill, many people called on the entertainment industry to use its clout to protect women’s reproductive rights there — just as it had done, successfully, in 2018 when the state seemed set to pass anti-LGBTQ legislation.

I was one of those voices calling the industry to account. I believed that studios and production companies should boycott the state, which has become known as the Hollywood of the South by offering juicy tax breaks to lure movie and television productions that pour loads of money into its economy.

Supporting a state that passed laws so dangerous to women was, I believed, tantamount to supporting those laws.

I took a lot of heat for that column, and not just from the usual anti-abortion, “you libtard” crowd. Georgians, including many women, took me to task for attempting to add injury to injury. A Hollywood boycott, they said, would eliminate jobs, depress the economy and deprive the very people I was claiming to care about of much-needed resources.

It was, and remains, a legitimate argument — the pain of any attempt to put economic pressure on an institution is invariably felt first, and most keenly, by the workers, who are often the very people the boycott is intended to aid.

According to the Atlanta Journal Constitution, film and TV production spent $2.9 billion in Georgia in 2019; the loss of that kind of money would definitely get political attention, but it would also undoubtedly harm those residents who earned some of it and damage a community already reeling from the COVID-19 pandemic.

In any case, Hollywood wasn’t listening in 2019, at least not to those calling for a boycott. A few directors and producers swore to stop working in Georgia, while others said they would stay and help the fight, but most studios and production companies chose not to get involved in controversy around the abortion law, which many believed (correctly, as it turned out) would be overturned in a higher court.

But now, silence is not an option, whatever the economic ramifications or potential legal recourse may be.

In an obvious response to Georgia’s historic support for Joe Biden in the 2020 presidential election and the state’s subsequent and equally historic election of two Democratic senators, the Republican-led Legislature has passed — and the governor signed — a 98-page measure that is blatantly and specifically designed to make it more difficult for people of color to vote and less difficult for the Legislature to overturn election results.

As if the new restrictions regarding absentee ballots (a driver’s license or state ID must be produced to acquire a ballot) and drop boxes (they must be located in early voting centers, which are open only during normal business hours) weren’t enough, it is now against the law to provide food and water to voters waiting in line (Kind Bars and Arrowhead, please tell me you are making plans).

Biden called the new legislation “an atrocity”; Michael Waldman, the president of the Brennan Center for Justice, likened it to Jim Crow laws; the NAACP and several voter activist organizations including the Black Voters Matter Fund have filed lawsuits; and many have called on large Georgia based-corporations, including Home Depot, Delta and Coca-Cola, to denounce the new voting restrictions or risk national boycotts.

Thus far, only Delta has responded. After a few days of waffling and claiming that company leaders worked with elected officials to remove “the most egregious“ aspects of the bill (I shudder to think what they were), the airline finally denounced the law in full, declaring that it is “based on a lie” about the November election and will “make it harder for many underrepresented voters, particularly Black voters, to exercise their constitutional right to elect their representatives.”

Every other company, including Hollywood studios, seems willing to risk the boycott.

There has been markedly less personal outrage than in 2019, but several individuals, including director James Mangold and actor Mark Hamill, have publicly stated that they will not work in Georgia until the new law is overturned. And once again, many politicians, economists and community leaders have argued that a boycott will do more harm than good.

Stacey Abrams, who gained national recognition for her heroic efforts to get out the vote in 2020, called the new legislation “voter suppression” — but in 2019, she opposed calls for a Hollywood boycott around the abortion law, telling The Times that she respected those who called for a boycott but preferred a different path.

Given the state of the entertainment industry at the moment — stuttering to restart after months of pandemic shutdowns in which millions lost their jobs — it’s difficult to imagine productions pulling out of Georgia, especially if Abrams and other state activists call on them to remain. But the alternative cannot be “stay silent and do nothing,” which has been the general response thus far.

As many have pointed out, the entertainment industry was very vocal in its support of last summer’s Black Lives Matter protests and has made racial diversity and justice a central talking point of how the industry needs to change. Which is great, as far as it goes, but it doesn’t go very far if those calls for justice do not extend to fighting Georgia’s blatantly racist attempt to restrict the fundamental requirement of democracy: the right to vote.

And not just for the Oscars.

Like many industries in this country, Hollywood has been through a lot in the last year. The future of the big-screen experience is still uncertain, pandemic filming restrictions are expensive, and I cannot imagine the scheduling nightmare virtually everyone is facing.

But none of that is as important as the disenfranchisement of fellow citizens by the very government elected to serve them. If people cannot vote because the needs of their community are not being met, or if their votes can be cast away by individuals or bodies unhappy with the result, this is no longer a democracy. Period.

No one expects Hollywood to solve this. But neither can an industry that has prided itself on telling stories of resistance, resilience, conflict, humanity, honor and valor simply remain silent when the rights of its workers, their audience and their country are being threatened. The greatest power the entertainment industry has is to raise a rallying cry, both to the corporations that share a stake in Georgia — Home Depot, Coca Cola, Delta and UPS all certainly do business with Hollywood — and to the rest of the world.

If all those companies working in Georgia came together to publicly denounce the new law, pledge to help ensure that every Georgia voter who wants to vote in the 2022 election will be able to do so and then follow through on that pledge with financial support and other resources … well, what’s the opposite of a boycott?

But if Hollywood chooses to remain silent, especially after Delta has spoken out, well, it is not written in the Constitution that a return to normal has to include going to the movies or watching television, especially when it comes to those films and series filmed in a place where the Constitution no longer guides governance.