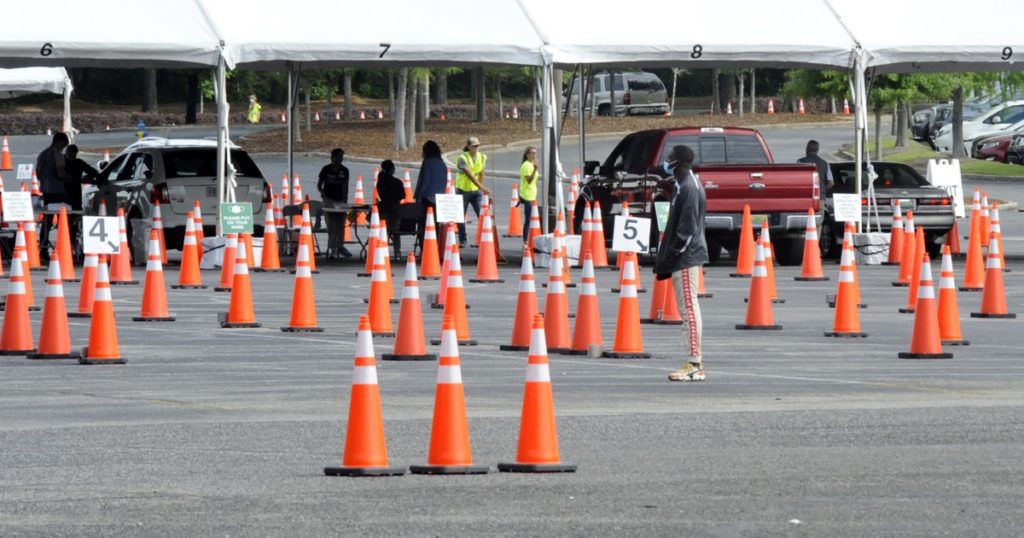 For more than a year, Steve Allender, the Republican mayor of Rapid City, S.D., took a public stand in favor of COVID-19 safety measures, urging people to wear masks, avoid large gatherings and — following his example — get vaccinated.

Constituents responded by heckling him at City Council meetings and staking out his house in a campaign to intimidate him and portray vaccination as an assault on their personal freedom.

By early summer, Allender had quit trying. The highly infectious Delta variant was surging, but with so many people refusing to get shots, he concluded there was nothing that he or other local officials could do to stop it.

“Our role is just to sit back and let it happen,” he said in an interview. “I feel like a bit of a coward.”

His experience with the toxic politics of vaccination is far from unique.

The Los Angeles Times set out to understand how such politics play out at the local level. We looked at the percentage of people who are fully vaccinated in each U.S. county with a population of at least 20,000 and for every state except Hawaii — for which no county-level data were available — identified the county with the lowest rate.

Pennington County, where Rapid City is located, had the lowest rate in South Dakota at 34% — compared with 47% for the state and 50% nationally.

Then we asked the mayors of the county seats why their counties had fallen behind and whether they were vaccinated. In the four places without mayors, we asked town managers.

Of the 26 officials who responded, 17 were vaccinated, three were not, and six declined to say. The majority expressed deep frustration at the way politics had infected the campaign to inoculate enough Americans to wipe out the virus.

Most of the places with the lowest rates were overwhelmingly Republican, often among the reddest counties in their respective states when it came to support for Donald Trump in the 2020 presidential election. In several, Trump — who was vaccinated in January — won by more than 50 percentage points.

Trujillo was among the first locals to be vaccinated in midwinter, when he secured a spot because vials were going to waste for lack of sign-ups. The rate for the county is now 20% — about a third of the rate statewide.

Well aware that promoting vaccination could hurt his campaign for reelection in April, the mayor said he rarely mentions it anymore.

“You could lose votes for pushing the vaccine too much,” he said.

It is perhaps because of the political perils of discussing vaccination that so many Republican mayors either failed to respond to The Times inquiry or — in six cases — responded but said they would not answer any questions.

Ralph Lane Jr., the Republican mayor of Colville, Wash., the largest city in Stevens County, where the vaccination rate is 30%, kept it brief. “I have to tell you that my opinion about vaccines (or the lack of them) means very little in the grand scheme of things,” he texted.

A study published this month in the Proceedings of the National Academy of Sciences found that unvaccinated Republicans were more likely to change their minds after watching Republican politicians endorse inoculation. They were less likely to do so when those endorsements came from Democrats.

Several mayors blamed their low rates on misinformation about vaccines.

In Pawhuska, Okla., Mayor Roger Taylor had heard it all. His rural county, Osage, which is about an hour northwest of Tulsa, has a vaccination rate of 22%, about half the statewide rate.

“Rumors go around that they’re putting something in [the vaccines] to track you,” said Taylor, a 65-year-old Democrat. “Some people say they have never taken a flu shot in their lives and they’re healthy.”

The county of 47,000 has been reporting well over a dozen new cases a day — a big uptick — prompting commissioners to consider limiting access to government buildings and other restrictions.

Taylor, who had gotten a mild case of COVID-19 in December, said he believes the dangers are real. Still, while his wife, who has asthma, had already received her shots, he remained unvaccinated.

“I’m pretty sure I’ll get it,” he said of the vaccine. “This new strain may be different…. I’m being stubborn, I suppose.”

Some mayors also held on to inaccurate information.

In Sioux County, Iowa, where 34% of residents are inoculated, Orange City Mayor Deb De Haan said many of the unvaccinated had already been infected and therefore were safe.

“Their natural immunity is protecting them,” she said.

Scientists say it is unclear how long or to what degree naturally produced antibodies provide protection against further sickness. The Centers for Disease Control and Prevention has urged those who have recovered to still get the vaccine.

De Haan, a Republican, said she was among those who had been sick with COVID-19. Still, she decided to get vaccinated — a decision she did not explain.

Several mayors suggested that deep distrust of the federal government was driving their numbers — and some stood proudly with the doubters.

“I’ll take my chances,” said Adam Stockford, the mayor of Hillsdale, Mich., explaining why he was not among the 30% of Hillsdale County residents who are vaccinated.

A Republican, Stockford said his city of 8,000 near the Indiana and Ohio borders was filled with “trailblazers” with “very independent” streaks.

Overall, 49% of Michiganders are vaccinated. Rates have risen in the last month amid growing numbers of new infections. Stockford did not anticipate numbers going up in his largely rural county, where Trump beat Joe Biden by 48 percentage points.

Research backs up his thinking.

In a recent survey of 1,517 adults across the country, nearly half of those who were not vaccinated told the Kaiser Family Foundation that they would “definitely” not change their minds. About a third were still waiting to decide. Smaller numbers said they would get their shots as soon as possible or only if forced.

The biggest unvaccinated groups included Republicans, rural residents, the uninsured and people younger than 30. Many told the researchers they viewed the danger of the pandemic as “generally exaggerated.”

Reece Keener, the Republican mayor of Elko, Nev., said he shared that view, arguing that the Delta strain was not any more dangerous than others. Scientists say the variant is much more contagious.

Keener said he told the elderly and those with preexisting conditions to get vaccinated but would wait for more research on vaccines before he did it himself.

Among the mayors who supported vaccination, the dominant sentiment was that they had done all they could to raise the rates and were never going to succeed.

“It’s disappointing,” said Mayor Allen Brown, an independent who leads Texarkana, Ark. He lives in Miller County, where 9% of people are vaccinated, well below the statewide rate of 37%.

Brown, whose wife works in marketing for Wadley Regional Medical Center, was well aware that hospitals were struggling once again as the Delta variant filled them with new patients. Statewide, only 25 intensive care unit beds were available last week, the lowest number since the beginning of the pandemic.

“When you don’t have the ability to take care of everyone, we have a serious issue,” said Brown, who lamented that local opposition to masking and safety measures only seemed to be growing.

While politics appears to be the biggest force stalling vaccination, experts say that socioeconomic factors also play a role, as evidenced by lower rates among Latinos and Black people, who on the whole have lower income levels and less access to healthcare.

Tom DeVivo, the Democratic mayor of Windham, Conn., said he regretted the showing in Windham County, where the rate was 51%, still above the national average but below the state total of 64%.

DeVivo said the number “should be higher.” He attributed it in part to Windham being the poorest county in the state.

In Strafford County, N.H., Robert Carrier said he was perplexed as to why the vaccination rate was still lagging by 7 percentage points behind the state average of 59%. The Democratic mayor of Dover who didn’t hesitate to get his shots questioned whether residents understood what was at stake.

“People think, ‘Well, I got by, and I don’t think I need it,’ because they haven’t been sick and they think the risk has lifted,” he said. “And obviously it hasn’t.”

After months of retreat, the coronavirus now infects an additional 100,000 Americans each day, most with the Delta variant. The CDC says that 90 million people in the U.S. who are eligible for shots have not received them. They make up the bulk of those infected, hospitalized and dying as wards again fill up and cities reinstate mask mandates.

Among the worst-hit states is Alabama, where the vaccination rate is 35%. In Winston County, that figure is just under 15%.

Those vaccinated include Elmo Robinson, the mayor of Double Springs, who describes himself as a “centrist, conservative Democrat” in a sea of Republicans. Trump won the county by 82 percentage points.

Still, Robinson, who regularly wears a mask to remind people that the pandemic isn’t over, said he hasn’t given up hope.

He pointed to some recent good news: The CDC said the number of people in the county who had received at least one shot had tripled since mid-July.

Kaleem and Castleman reported from Los Angeles and Read from Seattle. Times staff writers Molly Hennessy-Fiske in Houston and Julia Barajas and Celina Tebor in Los Angeles contributed to this report.