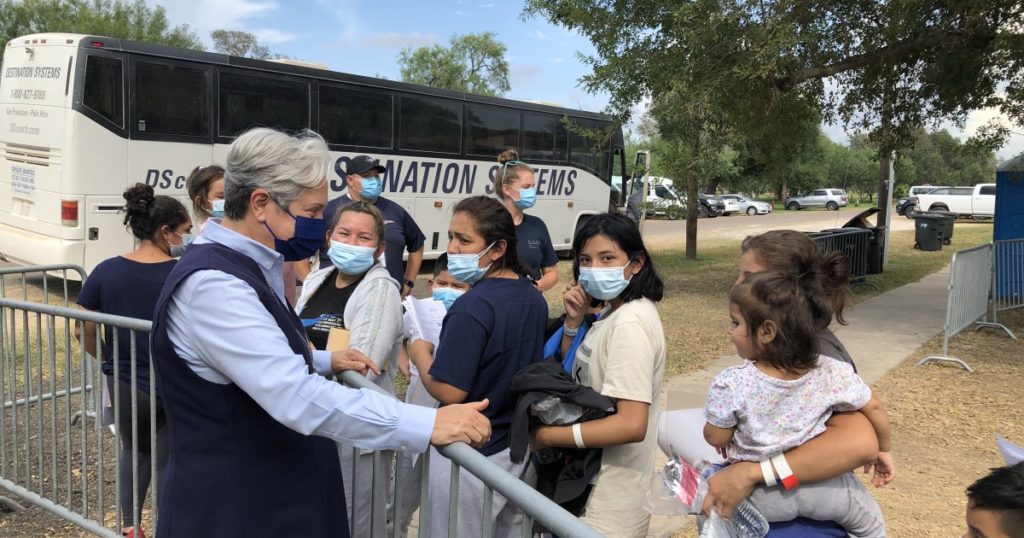 Hundreds of Central American asylum seekers awaited coronavirus test results under tents in a park on the U.S. bank of the Rio Grande last week.

U.S. Customs and Border Protection vans dropped migrants they had detained and cleared for release at the site for testing. All were tested, including babies. Some would test negative and leave later that day to join relatives in Arkansas, Florida or North Carolina. But 27 would test positive and remain quarantined in a fenced-off area of the park — temporarily at least.

Local COVID-19 vaccination rates exceed the state average, but COVID-19 infection rates and hospitalizations have jumped this summer, leading some to blame asylum seekers amid a historic surge in migration.

“People are concerned, and rightfully so,” said Sister Norma Pimentel, executive director of Catholic Charities of the Rio Grande Valley, during a visit to the park Thursday. “They shouldn’t be afraid these families are here. If anything, we’re trying to keep them safe from COVID.”

Texas remains a patchwork of pandemic hot spots, largely because only 47% of Texans are vaccinated. Unvaccinated people are straining hospital emergency rooms and intensive care units statewide, doctors say. During the last two weeks, average daily hospitalizations increased 22% statewide to 14,411, more than any other state except Florida.

But of 1.4 million residents in the Rio Grande Valley, more than half were vaccinated against COVID-19, according to the Texas Department of State Health Services. In McAllen’s Hidalgo County, 57% of residents were vaccinated, a higher rate than the national average. Many in the tightknit, largely Latino border communities were driven to get vaccinated after losing a loved one during the last year, when the COVID-19 death toll in the Rio Grande Valley reached 4,754, higher than all of the state’s major counties except Harris County, which contains Houston.

Pimentel and city officials opened the Anzalduas Park testing site in July after public outcry erupted over migrants being released by the Border Patrol without testing. At first, the site was seeing 2,000 migrants a day. Migration had reached a 21-year high, with 212,672 people taken into custody, according to U.S. Customs and Border Protection. Texas Gov. Greg Abbott issued several executive orders aimed at curbing migration, saying migrants posed a public health risk.

“The dramatic rise in unlawful border crossings has also led to a dramatic rise in COVID-19 cases among unlawful migrants who have made their way into our state, and we must do more to protect Texans from this virus and reduce the burden on our communities,” Abbott said in a statement before he tested positive for the coronavirus himself.

Police in the Rio Grande Valley town of La Joya, Texas, issued a widely viewed public health advisory July 26 about a coronavirus-positive migrant family who were released by the Border Patrol to a local hotel and were seen eating at a local Whataburger. The advisory alarmed local officials, who called on the federal government to stop releasing coronavirus-positive migrants.

Pimentel dismissed the advisory as “misinformation,” saying that only the father had entered the Whataburger, masked, and that he ate outside with his family. “It was not all these people coughing and contaminating everybody,” she said.

But she conceded that her group was still paying to quarantine migrants who have medical conditions or babies at local motels, and that those quarantined at the park can leave if relatives pick them up.

“We have no right to keep them if they want to leave. We encourage them to stay,” she said.

Last week, the U.S. Supreme Court reinstated President Trump’s “Remain in Mexico” policy, which requires asylum seekers to await the outcome of their U.S. immigration cases south of the border — but it’s not clear how that might affect the release of coronavirus-positive migrants inside the U.S. The Biden administration had already extended a Trump pandemic health order that allowed the Border Patrol to send most asylum seekers back to Mexico, with the exception of some families and unaccompanied youths.

“The situation at the border is one of the toughest challenges we face. It is complicated, changing and involves vulnerable people at a time of a global pandemic,” Homeland Security Secretary Alejandro N. Mayorkas said last month when he visited the Rio Grande Valley to tour the park quarantine site with Pimentel and meet with local officials.

Mayorkas acknowledged that migrants were increasingly testing positive, but rejected claims that they were boosting infection rates on the border.

“The rate of positivity is at or lower than the rates in our local border communities,” Mayorkas said.

Local officials who met with Mayorkas said they were still worried about migrants’ impact on their ability to cope with the pandemic.

But Cortez did not see migrants as a burden on the local healthcare system. Of 136,345 migrants tested in Hidalgo County this year, 10,251 or 7.5% tested positive, he said, compared with 16% in the surrounding county — and only 29 had to be hospitalized.

“Are we getting a group of people that are more infected than we are? No. Are they invading our hospitals and taking our beds? No,” he said.

About 10% of migrants at Anzalduas Park tested positive last week, Pimentel said. Under 3% of the county’s hospital beds have been occupied by migrants, who are arriving with the same coronavirus variants already seen locally, Melendez said.

“There’s no question they are part of the problem. But do I think they are the predominant piece? No. Vaccinations are more impactful than the migrants,” he said.

While the county’s vaccination rate is above the state average, 43%, or about 380,000 people, have been unwilling or unable to get the shots. Up to 40% of local hospital beds are occupied by COVID-19 patients, about 90% of them unvaccinated, Melendez said.

Across the border from McAllen, thousands of asylum seekers were waiting to enter the U.S. this week, hundreds of them camped in tents in a downtown park. Some U.S. nonprofits were testing them for the coronavirus. At the Senda de Vida migrant shelter, hundreds lined up Thursday to get tested with their children. Those who tested negative would be allowed to stay at the shelter, while those who tested positive would be quarantined at another private shelter opened last week by the Rio Grande Valley-based nonprofit Sidewalk School.

Guatemalan migrant Rosamaria Valderramos, 50, a house cleaner, was tested along with her three children, ages 19, 14 and 9. She said they had been living at the tent camp since April, and as more people arrived, it became cramped and sanitation deteriorated.

“The masks are not enough” to protect them, she said.

Yet Valderramos and her children tested negative, and were allowed to stay at the shelter.

Of 344 migrants tested that day, none were found positive for the virus, according to Brendon Tucker, a spokesman for nonprofit Global Response Management clinic, which conducted testing.