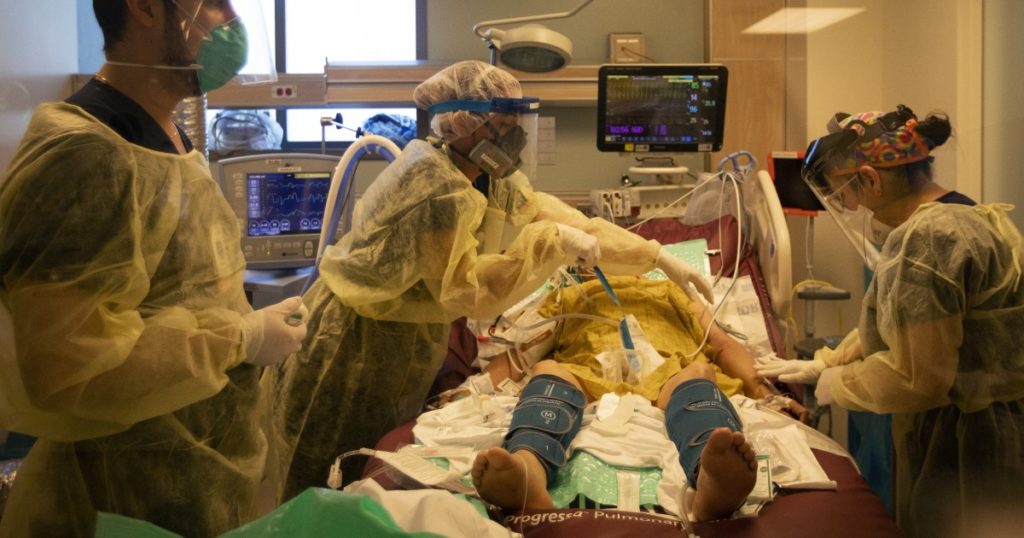 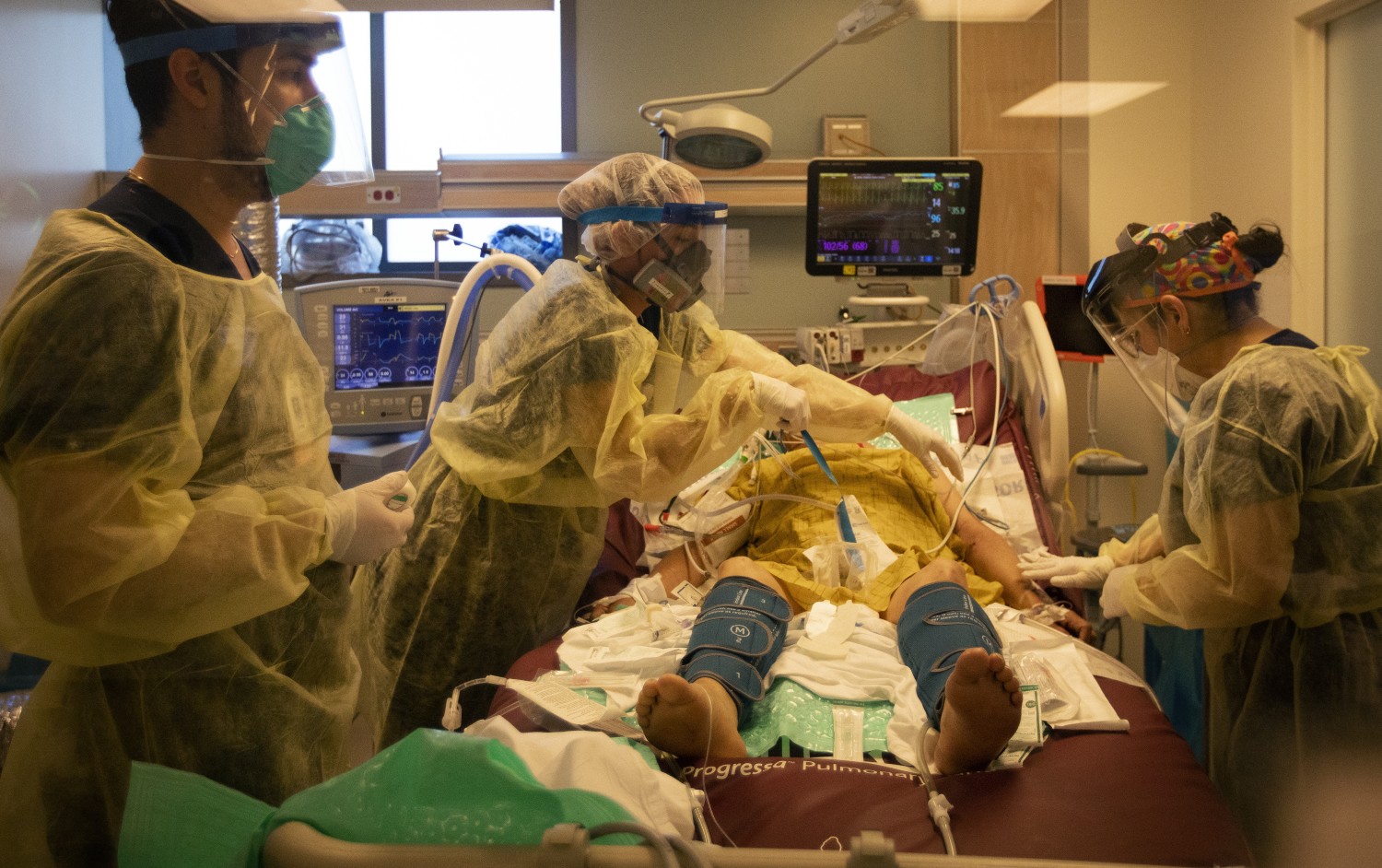 As the first COVID-19 vaccines move toward federal approval, California and other states are racing to finalize plans for who will get the first doses and how they will be distributed — critical decisions that have taken on new urgency as drugmakers prepare to ship vaccines in just a few weeks.

State and federal health officials have largely agreed that front-line healthcare workers who have direct contact with COVID-19 patients should be vaccinated first, a vital step as infections soar this fall, filling hospitals across the country.

There is also broad consensus that nursing home residents and patients at other long-term care facilities should be targeted in the initial immunization push. The virus has proved to be particularly deadly in these populations.

That means most Americans shouldn’t expect to get a vaccine at their doctor’s office or pharmacy for many months.

Starting off with a targeted immunization campaign also puts off for now knotty questions about which people deserve to get assistance next, how underserved and low-income communities hit hardest by the virus can be reached, and how the wealthy and well connected can be prevented from jumping the line.

The stakes are high, said Thomas J. Bollyky, who directs the global health program at the Council on Foreign Relations.

“If we are going to reach the levels of vaccination that we need to control the pandemic, which will be challenging, we have to sustain the public’s confidence,” he said. “If we don’t have a fair allocation of vaccines, that could undermine the whole campaign in a way that would do lasting damage.”

State health officials voice cautious optimism that they’ll be prepared to distribute the first vaccines when they begin arriving next month.

“We’ve been working very hard to be ready in December,” said Dr. Mark Ghaly, California’s health and human services secretary. “There are a lot of moving parts … but we feel like we’re on target.”

Ghaly and others noted that state and local health officials have considerable experience distributing vaccines, which is done every year ahead of the annual flu season.

“A lot of health departments have learned a lot of hard lessons over the years,” said Dr. Cameron Kaiser, who directs public health in Riverside County and serves on the board of the National Assn. of County and City Health Officials.

Nevertheless, the vaccination effort is being shadowed by the nation’s struggles to stand up effective coronavirus testing and the persistent inability of the federal government to get hospitals and other healthcare providers the protective equipment they need for their workers.

“I’m terrified that we’re going to see a repeat of the disasters we saw with testing,” said Trish Riley, head of the nonpartisan National Academy for State Health Policy, who has worked for decades with state health officials around the country.

Also missing, according to many state and local health officials, is money to fund a massive vaccination campaign.

To date, the federal government has provided only about $200 million to state and local agencies, far short of the $6 billion that the Centers for Disease Control and Prevention has acknowledged will be necessary for a robust vaccination campaign.

“For a long time, we’ve been lacking a strong national response to this pandemic,” said Gayle, who co-chaired a committee of the National Academies of Sciences, Engineering and Medicine that published recommendations last month on how to equitably allocate COVID-19 vaccine.

Further complicating efforts has been the refusal of the Trump administration to work with President-elect Joe Biden’s transition team on the coronavirus response.

Nevertheless, there are some signs the vaccine initiative is being better coordinated than the Trump administration’s other pandemic efforts.

Health officials have indicated clearly that vaccines will be distributed to states based on a simple population formula.

That contrasts with the opaque process for doling out ventilators and protective equipment from the national stockpile, procedures that the Trump administration refused to disclose until they were obtained by congressional investigators this year.

The distribution formula also should avoid the political favoritism that the president embraced earlier in the pandemic when he suggested medical supplies would be routed to reward his allies.

“My main concern was that the vaccine process was going to be politicized,” said Pennsylvania health secretary Dr. Rachel Levine, who is the current president of the Assn. of State and Territorial Health Officials. “But despite political comments that were made during the campaign, the process has stayed professional.”

The CDC is overseeing the development of detailed state immunization plans that, among other things, must outline how each state will prioritize the distribution of vaccine.

At the same time, federal officials working on Operation Warp Speed, a Trump administration initiative to speed the development and distribution of a COVID-19 vaccine, said this week they are finalizing preparations for shipping vaccine doses to states.

This is major logistical challenge, in part because the vaccine developed by Pfizer, which is expected to be the first available, must be kept at a very low temperature. The other current leading vaccine candidate, from drugmaker Moderna, does not have the same extreme cold requirement.

The first round of vaccine shipments is expected to go to medical centers that have the ability to store the vaccine and are best positioned to administer it to front-line healthcare workers, according to state and federal health officials.

A second delivery track to get the vaccine to nursing homes and other long-term care facilities is being coordinated by major pharmacy chains CVS and Walgreens in partnership with the federal government.

U.S. Health and Human Services Secretary Alex Azar said Wednesday that the federal government expects to be able to ship 40 million vaccine doses — enough to immunize 20 million people — by the end of December.

The initial distributions require states to identify their healthcare workers and nursing home residents, a lengthy process that many states are scrambling to complete.

In California, Ghaly said, state officials are still completing the identification process as well as enrolling medical providers who can administer the vaccine when it arrives.

Additionally, the state will probably have to set up some kind of tiering process because not all of the estimated 2.4 million healthcare workers in California will be able to get immunized in the first round.

“There’s a lot of work to be done,” Ghaly said.

Some states have clearly made more progress than others, said Jennifer Kates, senior vice president of the nonprofit Kaiser Family Foundation, which reviewed each state’s vaccination distribution plans. “There are still a lot of things that states need to figure out.”

The foundation’s review found, for example, that only about half of states mention plans to reach racial and ethnic minorities, despite the disproportionate toll the pandemic has taken on these communities. Just a quarter mention healthcare providers that could be used to help vaccinate these groups, the report found.

Health officials predicted that will be just one of the challenges that await states as the vaccine campaign gets rolling.

“There is going to be drama,” said Dr. Georges Benjamin, the longtime head of the American Public Health Assn. “So far, this administration has done a pretty good job supporting the science of developing vaccines. On the delivery side, the jury is still out.”