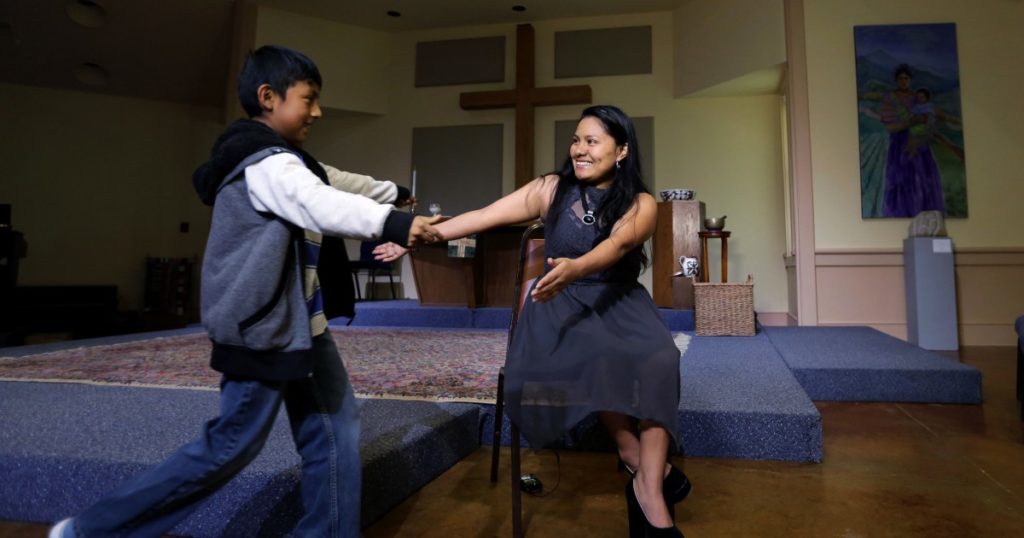 The notice from the U.S. Department of Homeland Security to pay a $59,126 fine didn’t bolster Hilda Ramírez’s confidence that she could soon leave the church where she and her son had received refuge for almost five years.

“I don’t have one cent to pay this,” said Ramírez. “Why are they doing this?”

Ramírez, 32, a native of Guatemala, is among dozens of immigrants facing deportation who have found sanctuary in recent years in houses of worship across the United States.

She is also one of a handful of high-profile female sanctuary beneficiaries —all of them indigent and barred from working legally in the United States — whom the Trump administration hit with fines of tens of thousands of dollars for ignoring deportation orders.

Now, these activists and allied immigration advocates, joined by congressional Democrats, are calling on President Biden to rescind the fines — which, in Ramirez’s case, were most recently dated December 2020, though she didn’t receive the official notice until after Biden took office — and lift all deportation orders against immigrants in church sanctuary. They’ve sought out church protection because U.S. immigration policy has long proscribed enforcement at houses of worship.

“Those in sanctuary have suffered enough,” stated a Jan. 26 letter to Biden from more than two dozen representatives and senators. “Your Administration’s actions can bring them the relief they need and deserve.”

A federal lawsuit, filed a day before Biden took office last month, demands that Washington cancel fines of about $60,000 each levied against Ramírez in Austin and women housed in churches in Salt Lake City; Columbus, Ohio; and Charlottesville, Va. The suit against the Department of Homeland Security and Immigration and Customs Enforcement labels the fines excessive and retaliation for the women’s public advocacy on behalf of sanctuary. It also alleges violations of constitutional rights of freedom of speech, association and religious practice.

“The intent of the fines was never really to collect money; it was to intimidate women who had taken sanctuary and spoke out,” said Alina Das, co-director of the Immigrant Rights Clinic at New York University School of Law. “ICE was signaling: ‘We may not bash down church doors, but we will do something that prevents you from ever having a normal life in this country.’“

The Biden administration is in the process of reviewing scores of Trump-era immigration policies that critics have labeled draconian. Biden has also vowed to pursue legislation that would provide a path to citizenship for some 11 million immigrants authorities estimate are living in the country illegally.

The population of sanctuary beneficiaries is limited — about 40 to 60 families across the United States, some with children who are U.S. citizens or legal residents, according to estimates from advocacy groups and Congress.

But the sanctuary movement, which began in the 1980s as a kind of modern-day underground railroad as churches offered shelter to Central Americans escaping Cold War-era conflicts, still resonates deeply. Religious leaders revived sanctuary in the 2000s as immigration enforcement intensified, including during the Obama administration, when formal deportations spiked. (Immigrant advocates are hopeful that Biden is not as aggressive on enforcement as his former boss.) Underlying the concept are biblical tenets to welcome the stranger.

“This is central to what we do,” said the Rev. Jim Rigby, longtime pastor of St. Andrew’s Presbyterian Church in Austin, Texas, where Ramírez and her son have resided since 2016, prior to Trump taking office. “You don’t mistreat the sojourner. … I hope we can finally get back to the words inscribed on the Statue of Liberty.”

Ramírez, a woman of slight stature who speaks Spanish with traces of the Mam tongue that is her first language, said she fled Guatemala with her son in 2014, escaping from domestic abuse and what she calls discrimination against Indigenous people of Mayan ancestry. Following a well-worn path, she traversed Mexico overland and made her way to the Rio Grande, where she said she crossed into Texas in 2014 and surrendered to Border Patrol, requesting political asylum.

In an interview last year with the Spanish-language Univision network, her son, Iván, recalled his thoughts at the time, when he was 8.

“It was an adventure for me,” Iván said. “My mother told me we are going to a better place, a beautiful place. I imagined a house with butterflies.”

Instead, he and his mother were held for 11 months in a privately run immigration lockup in south Texas. The conditions, she said, were wretched.

“The place looks nice from outside, but inside it was horrible,” Ramírez recalled during an interview at the Austin church. “My son got sick from eating rotting food. He had a fever and was vomiting. I was afraid he was going to die.”

She and other female detainees launched a hunger strike that made headlines. She credits the action and ensuing publicity with pressuring authorities to release her in 2015. She was outfitted with an ankle monitor to track her whereabouts as her asylum case made its way through the system.

Initially, Ramírez lodged in a shelter in Austin, the state capital and a liberal bastion in deep-red Texas. But she and her son were not shielded from eventual arrest there. Activists helped the two move into St. Andrew’s.

“Hilda and her son were just bright lights,” recalled Peggy Morton, who heads the Austin Sanctuary Network and first met the mother and son while they were in detention. “I was very impressed by her, and heartbroken about her situation.”

In the final year of the Obama administration, lawyers representing Ramírez managed to secure a temporary reprieve from the deportation order issued after her asylum petition was rejected. The stay allowed her to leave the church grounds and travel with advocates to Washington, D.C., and lobby for her case and those of other sanctuary recipients. She also visited an older sister who had settled in Oklahoma with her three children.

The Trump administration, however, did not extend her reprieve, and she was again forced to remain on the church premises to avoid arrest and deportation. Other sanctuary beneficiaries across the country also lost temporary stays against deportation. By then, Ramírez had become one of the public faces of a revived nationwide sanctuary movement.

Overarching policies of sanctuary, with its scriptural provenance, were an especially vexing concept for Trump. He frequently railed against so-called sanctuary cities, jurisdictions across the country that have curtailed cooperation with federal immigration enforcement. His administration sought, mostly without success, to deny federal funds to pro-sanctuary cities and towns in California and elsewhere. At one point, Trump even mused on Twitter about shipping illegal immigrants en masse to sanctuary cities.

Behind the rhetorical bombast, activists allege, was an official campaign of surveillance and retribution targeting high-profile sanctuary beneficiaries, including Ramírez.

In the summer of 2019, ICE levied fines of up to $500,000 against Ramírez and other sanctuary recipients for failing to comply with deportation orders. The Trump administration turned to a seldom-used legal provision imposing financial penalties for each day someone refused to comply with orders to leave the country. ICE later reduced the levies to about $60,000 per person.

“I first thought it was some kind of joke,” Ramírez said of the fines. “Then I realized that they were going after all of us who raised our voices against injustice.”

Earlier this month, Ramírez received an “invoice” from the Department of Homeland Security, dating from the last weeks of the Trump administration; she owed $59,126 in civil penalties. Payment is due March 3.

Ramírez spends her days caring for her son, helping at the church and sewing small dolls and masks embroidered with traditional indigenous patterns. She fights off occasional bouts of depression. Reared an evangelical Christian, she says she has embraced the Presbyterian faith community at St. Andrew’s. The pandemic has resulted in the suspension of Sunday services and other activities that once enlivened the church. Visits from advocates and others help blunt the loneliness.

“It’s very difficult, very stressful,” said Ramírez. “There are moments when I would like to just run away from here, when I think of abandoning everything. But then I think of my son. I want him to have a better life.”

The school bus stops weekdays outside the church to pick up Iván, an animated seventh-grader who turns 15 in April. A tutor visits the church to help with his lessons. The youth is on track for a special visa for juveniles to remain in the United States, advocates say. But mother and son cannot contemplate being apart. The specter of separation haunts them and is ever-present.

Iván has posted online videos documenting his family’s plight, the struggle to attain legal status, to remain together. Recently, Iván accompanied activists to a protest in front of ICE headquarters in San Antonio.

“When my classmates in school are worried about doing their homework,” he told reporters, “I am worried if my mom is going to be there when I come back from school.”