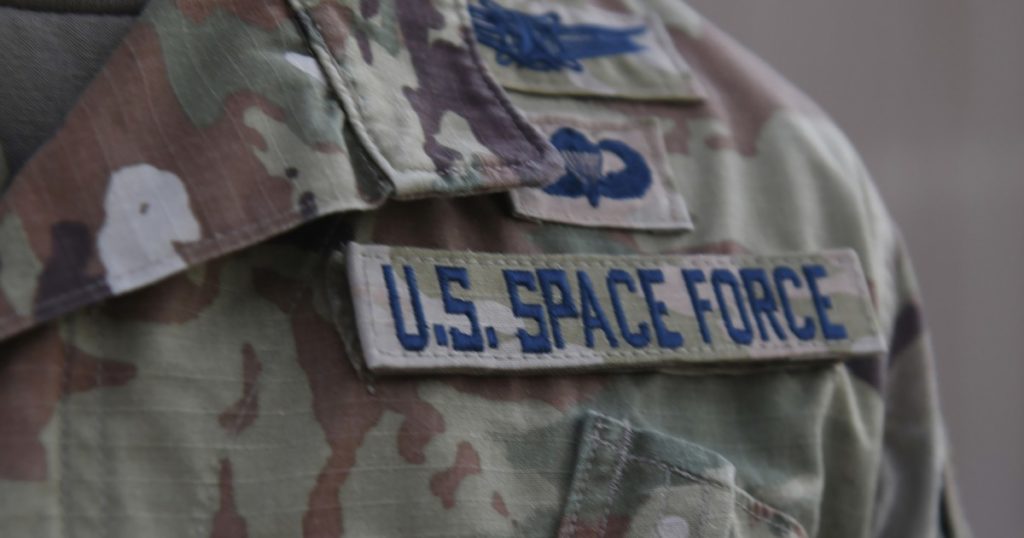 President Trump has a penchant for grandiose promises that go unfulfilled. So when he announced a plan to establish a Space Force, there was some skepticism.

Then-Sen. Bill Nelson (D-Fla.), ranking member on a Senate committee that deals with aviation and space, disliked the idea of consolidating space programs from the other military branches, saying at the time that there were “too many important missions at stake” to “rip the Air Force apart.”

The idea of the new service became fodder for late-night comedians and a Netflix sitcom.

The Space Force, however, was not merely a presidential musing. Created last year as the first new armed service since 1947, it was established with the mission of protecting U.S. interests in space from potential adversaries, be they rival nations or gobs of space junk.

Whether it can achieve that mission is an open question. Though Trump champions the initiative, he has done little to ensure it has the funding, staffing and authority to succeed. When he exits the White House next month, the Space Force’s trajectory remains unclear.

The Space Force has gained control of some space operations, but many others are still spread throughout the nation’s other military branches.

Within the Defense Department, the Air Force has the lion’s share of space programs and budget for space operations. It’s responsible for supporting and maintaining satellites for GPS, missile warning and nuclear command and control, as well as paying United Launch Alliance and SpaceX to launch national security satellites.

The Army and Navy also have their own space operations.

Consolidating these disparate programs into the Space Force has been slow. Some Air Force missions have transferred to Space Force control or are in the process of doing so — last week, Vice President Mike Pence announced that Cape Canaveral Air Force Station and Patrick Air Force Base in Florida would change their names and become the first two Space Force installations. Eventually all Air Force space missions are supposed to follow suit. But there has been no progress on integrating the Army‘s or Navy’s space missions.

“The last thing you want … after all of this reorganization and creating a new military service is to continue to have the fragmentation of our space programs and space organizations across the military,” said Todd Harrison, senior fellow at the Center for Strategic and International Studies think tank. “The whole point of this was to consolidate.”

Compared with the budgets and personnel for the other branches of the U.S. military, the Space Force is lean. And technically it’s part of the Air Force, just as the Marine Corps is part of the Navy.

Consisting of about 2,100 people as of Nov. 1, the Space Force commanded a budget of $40 million for its operations and maintenance in fiscal year 2020.

Meanwhile, the Air Force has more than 325,000 active duty personnel and a budget of $168 billion for fiscal 2020. (The Air Force designated almost $14 billion of that for space capabilities. These projects have since become part of the Space Force.)

The Space Force will probably always be the smallest military service, Harrison said.

“Space is more dictated by capabilities than mass,” he said. The Space Force “shouldn’t try to organize itself in the way of these much larger services because that’s not what it is. That’s not what it’s going to grow into.”

But the Space Force’s 2020 resources aren’t enough to carry out its mission of organizing, training and equipping forces to deter or defeat threats in space, said David Deptula, a retired Air Force lieutenant general and dean of the Mitchell Institute for Aerospace Studies think tank.

For fiscal year 2021, the Space Force is requesting a budget transfer from the Air Force of $15.3 billion. And over time, as space programs from other services start consolidating into the Space Force, their budgets should follow.

“The nation is facing some very significant threats in the space realm,” Deptula said. “Let’s make sure that service is set up for success.”

U.S. intelligence officials have warned that China and Russia have discussed developing new electronic warfare capabilities, which could have implications for U.S. military satellite communications or GPS satellite interference. In 2007, China tested an anti-satellite weapon and destroyed one of its own inactive weather satellites.

“Space Force really needed to be stood up to remain competitive with the very real threats coming from our nearest adversaries,” said James Marceau, managing director of aerospace and defense at consulting firm Alvarez & Marsal, who has also served as a senior advisor to the Pentagon on major strategies including the Space Force. “We can’t afford to neglect that domain.”

The strategic role of satellites came to the forefront in the early 1990s during the Gulf War, when the U.S. military began to rely on GPS coordinates to direct troops.

The bipartisan pair later introduced legislation to pave the way. They wanted the military to commit more time and resources to space — something that wasn’t always prioritized by a fighter-pilot-heavy Air Force leadership.

But there wasn’t enough support in the U.S. Senate for the proposal. Then, in 2018, Trump seized upon the idea.

In a speech to Marines at Air Station Miramar in San Diego that March, Trump noted that the U.S. was doing a “tremendous amount of work in space,” adding, “maybe we need a new force” called the Space Force. (Cooper would later say Trump “tried to hijack” the idea of the space corps.)

Five months later, Vice President Mike Pence announced that the Pentagon would create a new branch of the armed forces called the U.S. Department of the Space Force. The Space Force was then included in the 2020 National Defense Authorization Act, which was passed by Congress and signed into law by Trump last December.

At this point, it’s “highly unlikely” that the Biden administration would try to eliminate the Space Force, Harrison said. “It would be 10 times more disruptive if we tried to reverse it at this point.”

Doing so would require a vote in the U.S. House of Representatives and the Senate, as well as the president’s signature, he said.

“I have not heard anyone seriously contemplating the idea of disestablishing it,” Harrison said. “It hasn’t even gotten a chance to get started yet.”

Not to mention the bureaucratic difficulties of trying to transfer back agencies and people.

“You’ve already transferred thousands of individuals into the Space Force,” said Doug Loverro, former deputy assistant secretary of Defense for space policy and a leading advocate of the Space Force before its inception. “Can you imagine pulling the rug out from under them?”

The Space Force itself seems intent on sticking around.

In a document laying out the service’s priorities, Chief of Space Operations Gen. John W. “Jay” Raymond says “proliferating technology” and “competitive interests” have changed space from a benign environment to “one in which we anticipate all aspects of human endeavor — including warfare.”

The goals for the service include developing new capabilities, increasing cooperation and enabling a “lean and agile service.”

And in a decisive statement, the document — released just days after the election — states that it provides a foundation for where the Space Force wants to be “over the next decade, beyond the tenure of any one [chief of space operations], administration or Congress.”