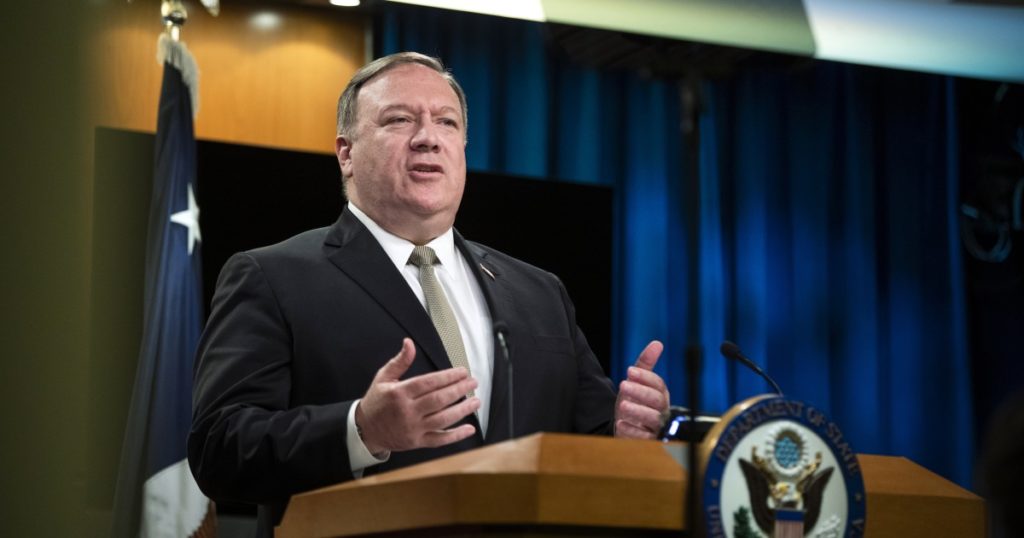 Secretary of State Michael R. Pompeo is arguably the most Trumpy of President Trump’s Cabinet secretaries. He has aggressively pursued the president’s “America First” agenda, mimicked the commander-in-chief’s bombast and routinely flouted norms observed by his predecessors.

In a sharp turn from previous Republicans and Democrats who held his post, Pompeo has echoed Trump’s praise of dictators and suspicion of traditional democratic allies. The result has been a mixed record that foreign policy experts say will take years to assess, but did little to build ties with foreign leaders put off by Trump’s contempt for alliances.

The secretary of State’s tenure and adoption of Trump’s brash style, Republican operatives say, can best be seen as a calculated way to position himself as Trump’s heir in the 2024 GOP primaries.

Trump’s electoral defeat has scrambled that calculus, putting in doubt the political future of a Cabinet secretary who morphed from Trump skeptic into die-hard evangelist. Adding to Pompeo’s woes, Trump is suggesting he will run again in 2024, which would probably force loyalists who had their eyes on the job like Pompeo to step aside.

If Trump decides not to run in 2024, a GOP candidate will still need to marshal the support of a large chunk of the outgoing president’s base and adopt many of his policies.

But Trump, by holding out the possibility of his own candidacy, freezes the rest of the prospective field.

“They can’t do much until it becomes clear whether Trump is going to run,” said Alex Conant, a political consultant who worked on Florida Sen. Marco Rubio’s 2016 GOP presidential campaign. “No donors, no party operatives, no early-state politicians will be able to endorse anyone. Trump is the 800-pound gorilla, and everyone will continue to make way for him until his plans are known.”

A West Point graduate from Southern California who relocated to Kansas and prospered in defense industry businesses, Pompeo was not always a Trump fan. Pompeo, then in his third term in Congress, backed Rubio in the 2016 primaries, warning that Trump would be an “authoritarian president who ignored our Constitution.” He even ridiculed the business mogul’s circus-like campaign.

But after Trump seized the nomination, Pompeo quickly cast aside his doubts and became a vocal supporter of the future president. He was rewarded with an appointment to be director of the Central Intelligence Agency.

After a year, he was chosen by Trump to lead the State Department, replacing former Exxon oil executive Rex Tillerson, who clashed with Trump’s policies and penchant for undercutting him publicly.

Pompeo promised to restore what he called “swagger” to a demoralized State Department, but the vow was short-lived. Soon, top career foreign service officers left or were forced out, and even mid-level diplomats began to jump ship as Pompeo’s top concern was bending to Trump’s will rather than hewing to diplomatic practice and traditions.

As Trump’s top diplomat, Pompeo embraced and fomented an “America First” policy, although it often resulted in America acting alone.

Pompeo cites as the administration’s main foreign policy achievements a set of agreements by a few Arab and Muslim countries to give limited recognition to Israel. He forcefully backed Trump’s tougher approach to China, including the imposition of trade tariffs, although nothing has blocked Beijing’s global expansion. He also has sought to punish Iran through a “maximum pressure” campaign that has neither changed the Islamic Republic’s regional activities nor slowed potential nuclear production.

“We fundamentally shifted to an idea that said we’re going to take care of America first, we’re going to get this right,” Pompeo told conservative talk show host Ben Shapiro earlier this month. “We’re happy to work with our friends and partners, but when we get it right for America, when we are realistic about what we can do and the things that we can’t do … we can be a force for good in the world.”

Pompeo mirrored Trump in other ways — the secretary has been criticized for how he used his office and for not tolerating dissent.

He spoke at the Republican National Convention in August — from Jerusalem, where he was on an official trip, which watchdog groups said probably broke federal law barring government officials from engaging in such overt political activity. In his speech, he praised Trump’s “bold initiatives in nearly every corner of the world.”

In May, Pompeo fired the inspector general who was investigating his attempts to sell arms to Saudi Arabia, over congressional bans, and his alleged personal use of federal resources. Each of the two succeeding acting inspectors general quit after a few months under duress as Pompeo attacked their work.

An inspector general report concluded that Pompeo’s repeated inclusion of his wife, Susan, on official trips did not violate the law, but that the secretary’s office failed to provide sufficient documentation. Another pending congressional investigation questions his speaking engagements in U.S. states — swing states — ahead of the Nov. 3 presidential election.

When Trump dispatched his personal lawyer, Rudolph W. Giuliani, last year in an to attempt to dig up dirt on his anticipated Democratic rival, Joe Biden, in Ukraine, Pompeo stood on the sidelines. The president ultimately tried to pressure the Ukrainian president to launch an investigation of Biden’s son Hunter in exchange for releasing desperately needed military aid.

“Letting Rudy Giuliani become secretary of State for Ukraine — to serve political purposes that were clearly illegal — will always be Pompeo’s most shameful moment,” said Stephen Sestanovich, a diplomacy scholar at Columbia University and a Council on Foreign Relations fellow.

The final straw for many American diplomats came when Pompeo refused to back the U.S. ambassador to Ukraine, Marie Yovanovitch, as Giuliani and Trump attempted to besmirch her reputation after she was called to testify at the president’s impeachment hearings.

Pompeo also earned considerable scorn in his refusal to blame Saudi Arabia’s crown prince and heir apparent, Mohammed bin Salman, for the gruesome killing of Saudi journalist and U.S. resident Jamal Khashoggi. The journalist was slain in October 2018 in the Saudi Consulate in the Turkish city of Istanbul. Numerous human rights and independent organizations blame the Saudi government for his killing.

But Pompeo, responding to a wave of U.S. congressional opposition, attacked the “Capitol Hill caterwauling” and accepted the Saudi government explanation that blamed a rogue operation.

Pompeo has never masked his simmering contempt for many journalists whom he considers to be opposed to the Trump administration. To challenging questions, he has told reporters they were “rude” or their question was “ridiculous.” At one news conference, he repeated a BBC journalist’s name over and over as if to scold her for asking the question. When an interview with an NPR journalist about Iran and Ukraine did not go as he hoped, he put out a press release condemning her.

In the Shapiro interview on Dec. 15, Pompeo said many American journalists are “beholden” to the Chinese Communist Party, and that’s why they don’t show more support for Trump.

He has spent his last weeks in office acting as though it were business as usual, telling journalists he was preparing to usher in the next Trump administration, and then rushing through final actions such as new sanctions on Iran. Like Trump, he also invited hundreds of people to extravagant parties and held often-maskless meetings, against public health advice — until he was exposed to the coronavirus and forced to quarantine. (He never tested positive, his office said.)

“Nothing is more important for a secretary of State to know than which issues can be handled successfully by the U.S. alone and which require help from others,” said Sestanovich, the Columbia University scholar. “Pompeo seemed to think you can solve this problem with ‘swagger’ — you can’t.”