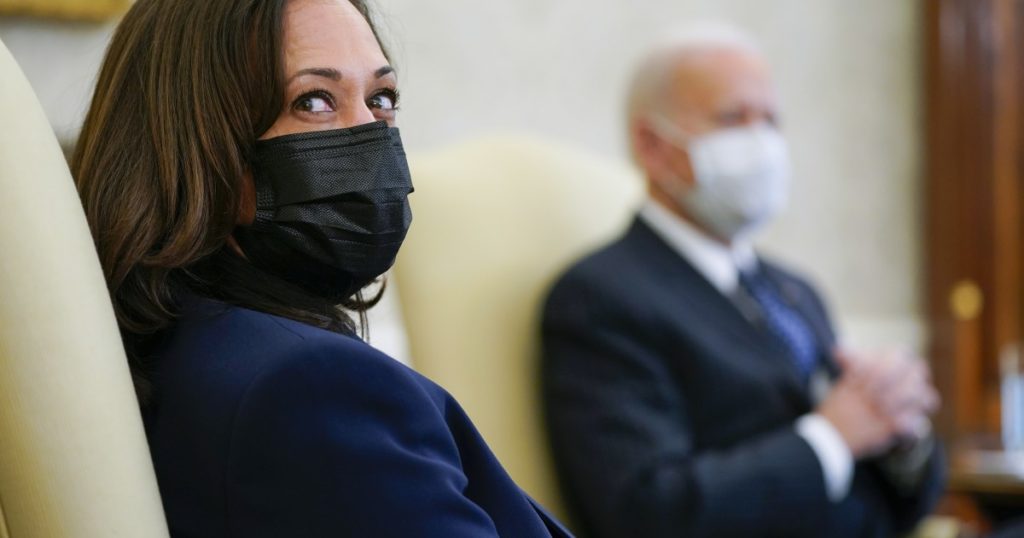 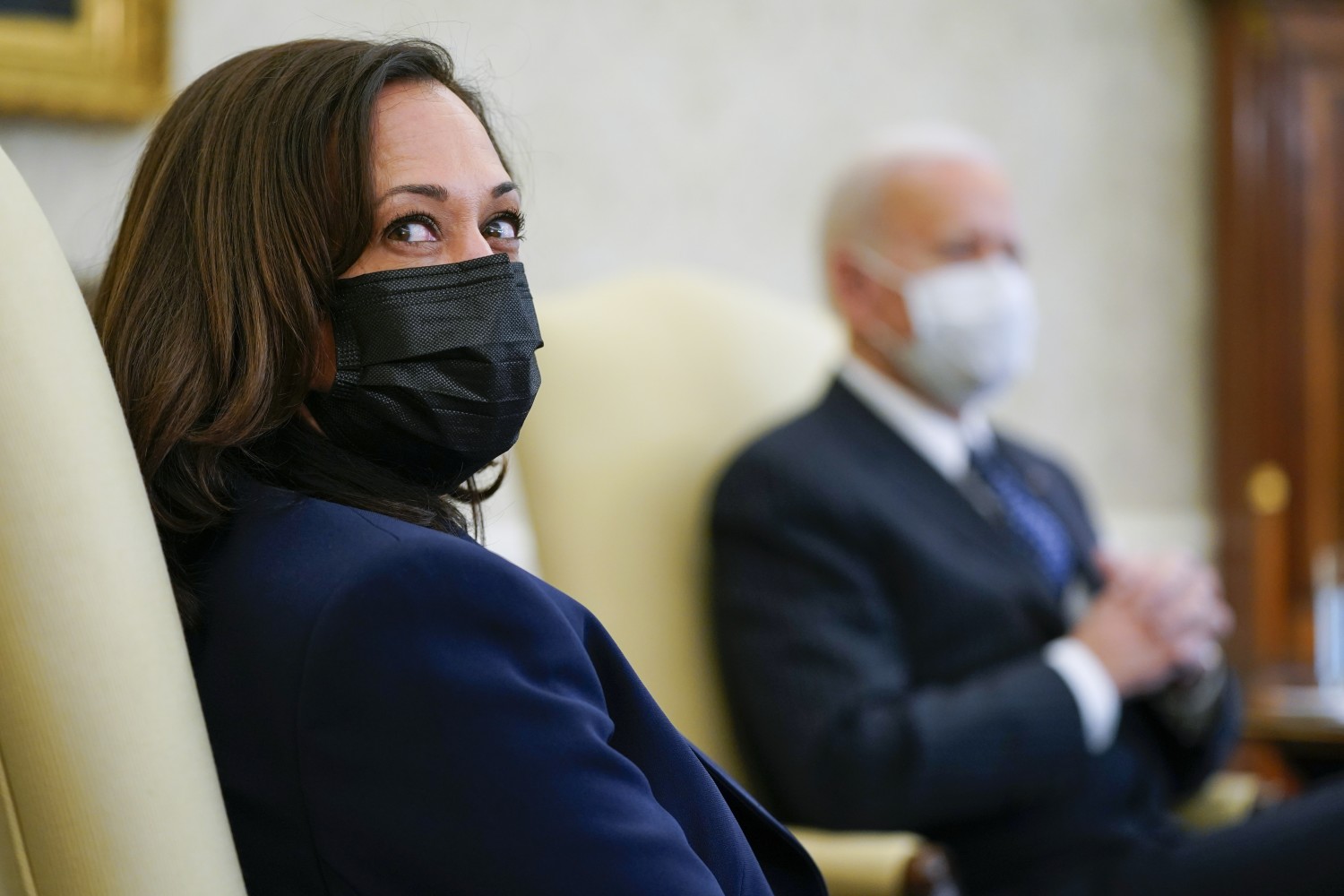 In a recent interview with the 19th, a nonprofit progressive news outlet, Kamala Harris was asked a series of blunt questions about the responsibility she bears as the nation’s first Black vice president.

What does it mean for Black Americans to hear her “speak truth” about the racial disparities in deaths from COVID-19? And what role does Harris think she plays in helping Black people overcome a hesitancy to vaccines and in dismantling decades of bias in the nation’s healthcare system?

Harris, to her credit, didn’t miss a beat.

“When I took that oath on Jan. 20, there were a whole lot of people standing on that stage with me,” she said. “And you may not have seen them, but they were in my heart, they were in my mind when I had my hand on the Bible and raised my hand to take that oath. And I feel the weight of the responsibility that comes with that.”

This is what has finally happened to Harris.

Late last week, the Black to the Future Action Fund released its “Black mandate for the Biden-Harris administration” — also known as the Build Back Bolder plan, which is not to be confused with the administration’s own Build Back Better plan. (Clever or confusing? You be the judge.)

Unlike political novice Ice Cube and his Contract With Black America, this plan is being shepherded by the co-founder of the Black Lives Matter Global Network, Alicia Garza — a Californian who actually has some standing to speak to presidential administrations on behalf of Black people.

The plan’s other prominent backers include the Rev. Al Sharpton, the Rev. William Barber II of the Poor People’s Campaign, as well as several of the activists who helped flip Georgia blue in the last election, including LaTosha Brown of Black Voters Matter, Nsé Ufot of the New Georgia Project and Deborah Scott of Georgia STAND UP.

Together, they held an online launch event for the Build Back Bolder plan on Friday.

“America has consistently failed to deliver on its promise to Black communities,” Garza said. “But when we are focused, when we are organized, when we are determined, Black America has been successful in delivering on our promise to not rest until freedom comes. We pushed the Biden-Harris campaign to victory, not for them, but … for us because we can’t wait any longer.”

“We didn’t elect them because we like them or, you know, because they’re our friends,” Brown added a few minutes later. “This is about power.”

Put cash directly into the hands of people — $2,000 a month until the economy recovers from the pandemic.

Cancel rent, mortgages and evictions, as well as bills for public utilities and internet access.

Eliminate zero-tolerance policies and ban the presence of police in schools.

Fully fund the Department of Housing and Urban Development’s budgets for public housing and Section 8 vouchers.

You get the idea.

Meanwhile, back on Earth, it’s not even clear that a plan to raise the minimum wage to $15 an hour, which is supported by President Biden, Harris and the Black to the Future Action Fund, will make it out of Congress and to the Resolute Desk.

There are the progressive demands of Black activists, crystallized in the California ethos behind the Build Back Bolder plan, and then there are the more moderate political realities of Washington. Harris, as the nation’s first vice president who is Black, as well as South Asian and female, will be under particular pressure to make the twain meet.

“We did not put you there for symbolism. We are past the Jackie Robinson days,” Sharpton said during Friday’s launch event. “We don’t want a Black in the game. We want to win the game.”

Perhaps the easiest starting point for Harris to begin paying the debt to Black America would be to curb the COVID-19 pandemic — and then find more ways to ease the economic and societal fallout from it, which is likely to be felt in hard-hit Black and Latino communities for years to come.

Already, the vice president has been touting her involvement forming a White House task force to address health inequities that have been exacerbated by the pandemic. She also has been using her voice to counter conspiracy theories about COVID-19 and encourage skeptical Black people to get vaccinated, as she did on the Black-owned L.A. radio station KJLH-FM (102.3) before heading home to Brentwood for the weekend.

But what about creating a national database of free coronavirus testing centers, as is called for in the Build Back Bolder plan?

Or how about rolling out a national public messaging campaign that doesn’t just promote the safety and efficacy of vaccines, but directly addresses the nation’s history of medical racism toward communities of color?

Or, to address the current crisis of racial inequities in vaccine distribution, why not require all 50 states to collect data on COVID-19 cases, deaths and vaccinations based on race and gender and, if possible, household income?

The need for such changes has never been more urgent. The pandemic is the proverbial “nail in the coffin that we are being buried alive within,” Garza said.

Indeed, the U.S. Centers for Disease Control and Prevention recently reported that COVID-19 has helped reduce the life expectancy for Black Americans by almost three years, the most of any racial or ethnic group during the first half of 2020. Someone who is Black can now expect to live six years less than someone who is white, reversing a trend that had been narrowing that gap since 1993.

These are all things for Harris to ponder.

If, as is widely expected, she wants to run for president again, she’ll need to maintain the support of left-leaning voters.

So far, so good in California. A recent poll by the Institute of Governmental Studies at UC Berkeley found that 56% of voters view Harris favorably, compared with 38% who view her negatively, which breaks down largely along party lines. But other states, where Black voters hold considerably more sway over national elections, are another matter.

Lest anyone forget that, after years of sending Black and Latino men to prison as a prosecutor, Harris was not the first choice of many to be vice president. Rather she was the acceptable compromise.

“What we’ve learned is that we only are going to get what we fight for,” Sharpton said. “And even though some [politicians] may be better mannered, it does not mean that they’re going to do what is right for our agenda. We’re not fans. We’re grown folks that have the power of our vote.”