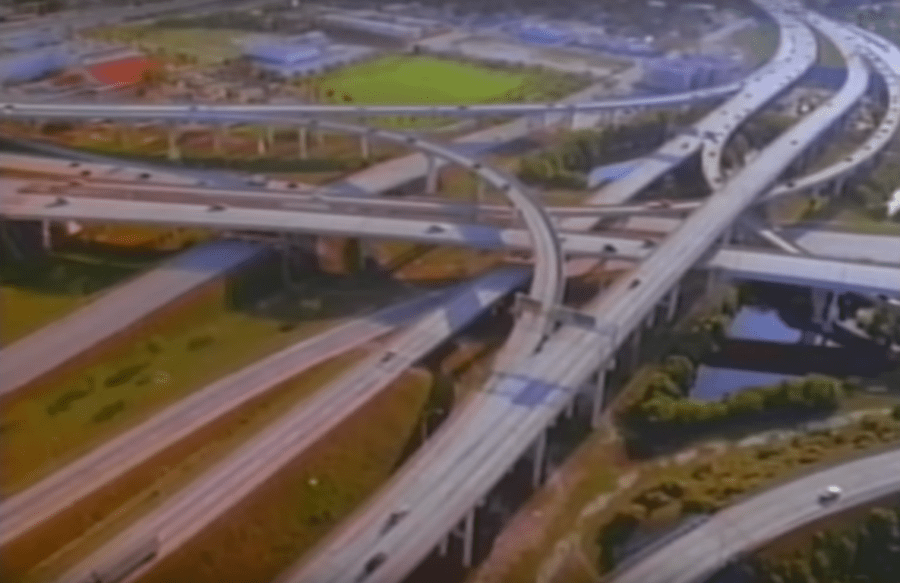 “It was a political drive-by shooting.” That is how Jessy McCrary described the effect of a new expressway on his town in the early 1960s. “Overtown was killed, without any concern from those with political powers at the time.”

Later in the same documentary, Divided Highways, an engineer who helped build interstates admits, “I’d be upset if I had to move because of a freeway.” Then he shrugs, and adds, “Some people have to suffer; that’s the way it is sometimes.”

The fact that McCrary is black and the engineer is white is no coincidence. Divided Highways is a remarkable (and sometimes entertaining) look at the history of this nation’s mid-century highway-building frenzy. The smart engineers and road designers constructing a post-war society “could do no wrong,” and were given a free hand to build what the film calls the biggest infrastructure project in human history: the U.S. interstate system.

And those smart engineers deliberately drove their fancy new freeways directly through the middle of thriving Black and poor communities in cities throughout the country. “Very few Blacks were living in Minnesota,” says the narrator. “But the road builders found them.” Overtown, West Oakland, Inglewood, Boyle Heights, Downey – the story is the same in each.

In 1986, the L.A. Times actually called the Century Freeway a “sensitive” project because it made some changes in response community opposition. That is, Caltrans paid for not just construction of the freeway, but also a housing program to replace about half of the homes it destroyed in the process of building.

Half. Like that deserved a gold star. In 1986. And if 1986 seems far away – it is not. Nevertheless, even in 2020, freeway-building engineers still believe that removing homes to make highways wider is somehow an appropriate solution for safety, or congestion, or whatever it is they’re trying to solve.

Blight is no longer an accepted excuse.

The engineers know best is a mindset that has a strong hold, at Caltrans and local and regional government agencies. And it takes no account of what people actually want.

So when Caltrans made an official statement last week saying it would consider the impacts on communities – on equity – of its planning and projects, that’s a big deal.

But is Caltrans equipped to live up to the commitment it is making here? Its Statement on Equity contains big promises: to create a representative workforce, to improve recruitment, hiring, leadership development; to “meaningfully engage” communities most impacted by structural racism through “more transparent, inclusive, and ongoing consultation and collaboration processes”; to “reform programs, policies, and procedures based on this engagement to avoid harm to frontline and vulnerable communities [and to] prioritize projects that improve access for and provide meaningful benefits to underserved communities.”

Caltrans Director Toks Omishakin acknowledges that it’s a big lift. “This is going to take time,” he told Streetsblog in a recent interview. “I use the old analogy of a battleship versus a speed boat – by no means is Caltrans a speed boat. We’re not going to do this in one quick turn.”

Also, Caltrans is very much at the beginning of this turn. The first step Omishakin took was to have Caltrans leaders watch and discuss Divided Highways, as well as another film, Segregated by Design, based on the book The Color of Law by Richard Rothstein, about the ways federal, state, and local governments built segregation into every aspect of life.

“Pretty much every one of them responded by saying, ‘I didn’t know how much of an impact we had,’” said Omishakin.

“We’ve got work to do,” he admitted, in an understatement of sublime proportions.

People who have been working for years on race and equity issues in California know this. They welcomed the statement from Caltrans, but are looking for more than words.

Julia Jordan of The Leadership Counsel for Justice & Accountability told Streetsblog that “it is heartening to see Caltrans acknowledge the deep history of institutional and systemic racism that contributes to inequitable transportation decision-making, design, and impacts, and commit to concrete actions to address this legacy.”

These actions must reflect both historical and recent injustices that the agency has actively perpetrated. Systemic problems require systemic solutions, and Caltrans has a unique opportunity to lead its partner agencies and urge local agencies to act beyond the lip-service of “equity” and towards tangible, transformative racial, gender, social, environmental and economic justice.

Similarly, Hana Creger of The Greenlining Institute wrote, “We are grateful for Caltrans’ acknowledgement of their past harms to communities of color and their commitment to equity moving forward. Of course, words must be followed by actions, and we look forward to seeing how Caltrans changes their structures and practices to advance equity in a meaningful way.”

“I commend Caltrans for putting out such a bold statement and look forward to holding them accountable to these words,” said Nailah Pope-Harden of ClimatePlan. “The road ahead for Caltrans will need to include dismantling physical and figurative structures, building capacity for new leadership, and reimagining plans currently in place. It will not be an easy task, but we will all benefit once it’s complete.”

Jeanie Ward-Waller, Deputy Director of Planning and Modal Programs at Caltrans, acknowledged that difficulty. “We are changing the culture of what has long been a civil engineering, highway-building organization to a modern transportation department,” she said.

“We own and operate an efficient state highway system, and we try to reduce negative impacts on communities and on the climate,” said Ward-Waller. “There are so many complex issues we deal with, and we are training the future workforce to do that work. Equity is just one piece of all those outcomes we are aiming for. It is a critically important piece, one that is in the national consciousness now more than ever, and we need to [take advantage of that momentum to push it forward]. But … we are changing our approach to all of our work, and that’s hard to do.”

Omishakin said his department has begun by focusing on what he calls “home base.” “We’re starting with our team,” he said. “There’s going to be a larger effort to deliver on this externally, but if our team doesn’t embrace this as much as they can [nothing will change]. On the other hand, if a large group of us understand this, embrace it – especially [the reasons] why this is so important – we can do amazing things.”

But, he cautioned, “We have 22,000 people working for our department. Not everybody is going to be holding hands and singing Kumbaya about how amazing this is.”

“Moving forward, as long as I am given the opportunity to serve in this role, this is the path we’re going down now,” he said. “We’re going to have to be smarter about how to improve capacity on roadways, [by using] everything from managed lanes to more transit facilities, walk and bike opportunities. The days of [saying] let’s just add two lanes to each side of the freeway and that gets us what we need from a capacity standpoint–those days are largely gone.”

“There are communities who have needs related to connectivity and safety that we need to be very considerate about, and find some balance in,” he said. “But the days of just building giant freeways for the sake of capacity–we need to get more cars on– those days are behind us. I will not be endorsing those types of projects in my responsibility here at Caltrans.”

As long as engineers can have their heads buried so completely in their work that they can ignore, and even be irritated by, community concerns about their projects, no change will happen. Streetsblog L.A. has been thoroughly covering the blundering communications around proposals to destroy houses – and even to remove “less expensive” housing because, well, you know, it’s easier to move poor people – to expand the 605 and 5 Freeways through the cities of Downey, Santa Fe Springs, and other nearby communities. This is not a conversation from the 1980s – this is happening today.

When asked about that project, Omishakin responded, “I had some conversations with senior leaders about that. I asked: Are we actually talking about displacing people in this era? I was reassured that was not the case.”

It’s important for the head of Caltrans to be saying this – and it’s also important for the rest of us to keep an eye on it. But it will take a lot of work, and time and expense, for communities to protect themselves from Caltrans and Metro’s plans. Why should they need to work so hard? If Caltrans says it is committed to equity, then it’s also up to them to show up, to ask questions, to notice who is being served by a project and who is not.

Ward-Waller acknowledges that Caltrans will need to find new ways to reach out to communities. “We are pushing our staff out in the districts to do public engagement differently than we’ve done it before,” she said. “This is not new in the advocacy community, but it is for Caltrans.”

“It’s not easy, and you know from all the projects that [Streetsblog] keeps an eye on that there are still going to be political battles over some of these projects, because a lot of people have a lot at stake – in the jobs they will create, in the money they will bring to certain communities. Those are not easy conversations to have, but putting this statement out and saying that we are committed to these things will send out a strong signal that this is something Caltrans cares about.”

“You know that we’re not going to get everything right from here on out, but we are making a strong statement, and striving to do better.”

“I long for the days when equity will no longer be performative but is something that is operational and ingrained in every aspect of our institutions,” said Pope-Harden. “It’s a long road ahead, but only possible when our agencies begin to take responsibility for their oppressive histories. I applaud Caltrans for acknowledging that historically they have been the driver – pun intended- in dividing, hurting, and harming communities of color and low-income communities.”

“This is a great statement of intent,” said Dave Snyder of the California Bicycle Coalition. “But those are easy. The hard part is implementation. For example, will they sacrifice a highway widening that disproportionately serves richer whiter travelers in order to put money into sound barriers and other mitigations for the impacts of a freeway on poorer, less white neighborhoods? Will they spend the $8 billion necessary to create safe bikeway networks throughout California, and start with the most disadvantaged neighborhoods?”

“These actions are what I want to see,” said Snyder.

For something interesting to watch over the holidays, check out both films mentioned above, which can be found online.