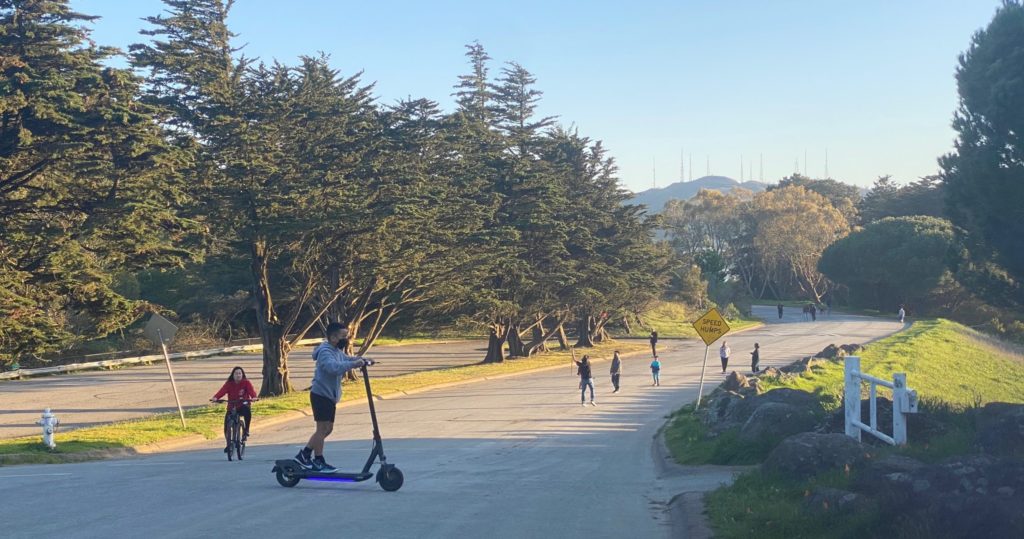 The John F. Shelley Drive loop in McLaren Park, which serves the Field of Dogs, the Upper Reservoir, and the Redwood Playground Picnic Area, was made car-free and opened to people last April when the pandemic lock-downs began. Some advocates want at least some of it to stay that way.

“Nobody will lose access,” explained Ren Volpe, a safe-streets advocate and Excelsior resident who lives near the park and started a petition to keep some of Shelley Drive car-free. “But they might have to drive around the opposite side of the loop [see map below].”

Volpe created the map [added below] to show the relatively flat portion of Shelley Drive she wants to see kept car-free. See the above [the dashed blue is currently car-free] and below [the purple portion is car-free] for comparison.

“Noooo! You won’t be able to park at the reservoir,” Volpe said she hears motorists say about the suggestion of keeping parts of Shelley closed to cars after the pandemic. That is, until she points out that motorists will still be able to access absolutely everything, just from the opposite direction through the loop.

“Open space for biking and walking has been historically lacking in San Francisco’s southeastern neighborhoods,” wrote Nesrine Majzoub, spokesperson for the San Francisco Bicycle Coalition. “That’s why it was so important the public health order created car-free space on Shelley Drive in McLaren Park.”

But will it stay that way once the health orders are lifted? As Streetsblog readers are no doubt aware, this has parallels to the fight over JFK Drive in Golden Gate Park. Just like with Shelley Drive in McLaren Park, closing a portion of JFK does nothing, in reality, to stop motorists from accessing the features of Golden Gate Park, given the alternate roads that remain open to cars, the ample parking structures, and other areas with free parking (as this Tweet taken on MLK yesterday illustrates).

I must be lost. I was told pretty clearly there’s no way for drivers to reach Golden Gate Park. pic.twitter.com/NQ4hRGBtML

Streetsblog readers will recall that last week Supervisors Shamann Walton (D-10) and Ahsha Safai (D-11) called closing part of JFK tantamount to a “segregationist” policy of banning BIPOC motorists from Golden Gate Park. To Streetsblog’s knowledge, they have not made similar claims about Shelley Drive in McLaren. Note that their districts include and adjoin McLaren Park.

Streetsblog reached out to Walton and Safai for comment on whether closing part of Shelley to motorists also has similar “segregationist” implications. Walton replied that he will look into it. Safai did not answer in time for this post. Streetsblog will update accordingly. Of course, the most obvious difference between the two is that JFK is adjacent to the de Young Museum, which is openly opposed to car-free JFK.

The other obvious difference is that, despite some improvements, “… McLaren Park is so neglected and gets a fraction of the funding that other parks get in the city… that’s absolutely an equity issue,” said Volpe. She added Shelley Drive doesn’t even have a sidewalk and that she fought for years, unsuccessfully, to get crosswalks put in.

As to keeping car-free spaces where possible after the pandemic, Volpe said she applauds all the efforts to reserve a little space for people who just want to bike, roll, and walk without constant fear of getting smashed by motorists. “I know people on the Great Highway are doing it, on JFK they are doing it… they have said ‘isn’t this [car-free space] nice, how can we keep some of this after the pandemic?’”

“Over the last year, we’ve heard from our members how special and well-loved this car-free space has become for San Franciscans, including families in Districts 11 and 10 and surrounding neighborhoods,” continued Majzoub. “We look forward to conversations with the City and neighbors in order to preserve the benefits of car-free space on Shelley Drive as we continue to advance our recovery.”