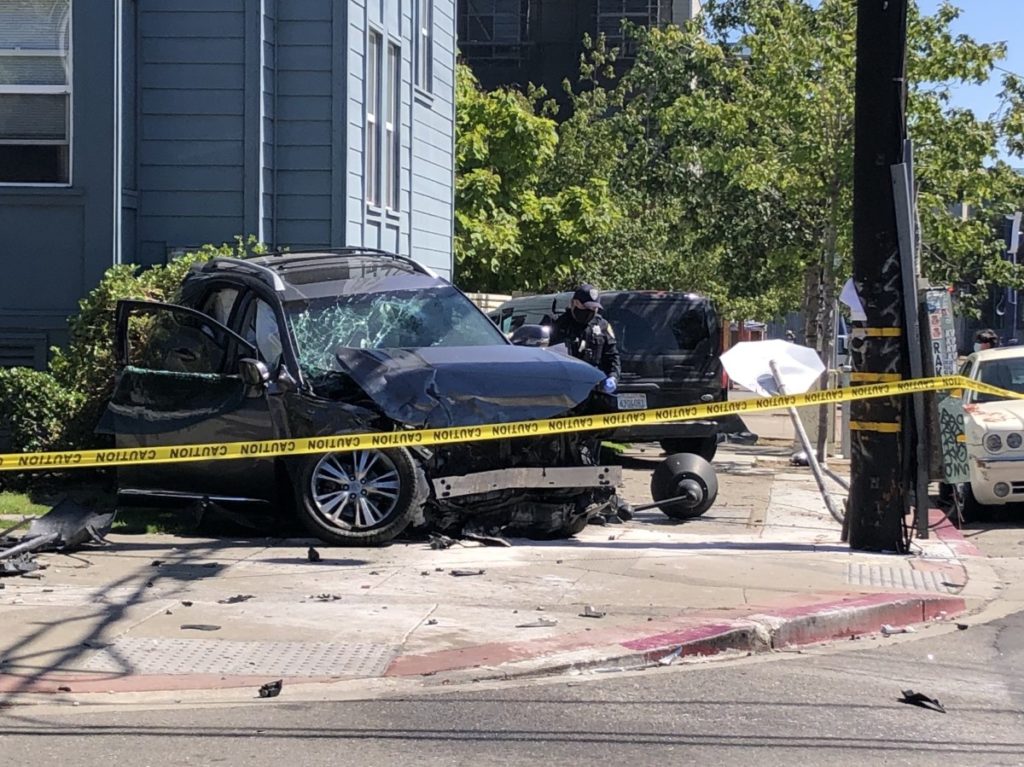 How many cars have to crash into houses before a city will make a street safer? That’s what advocates with the group “Safe 8th Street Oakland” are demanding to know from city officials. “I feel a little bit of PTSD, because when I hear a car screeching and speeding, I’m bracing myself for something to happen,” said Tamera White, a Neighborhood Watch block captain who has lived in the area for 15 years, as quoted in a video about the street.

Tim Courtney, who produced the video below, is a relative newcomer to the area–he moved into his place on 8th street less than a year ago–but cars have already crashed into the houses to the left and right of his. “That last time I heard it, both times I saw the aftermath.”

VIDEO: For years, residents of 8th Street have been plagued by extreme speeding and reckless driving, along with car crashes that kill or maim innocent people and damage property.#OaklandSlowStreets#CompleteStreets#VisionZero#BikeEastBay pic.twitter.com/bfbEjOSSuE

Courtney, who works in digital marketing and has long taken an interest in safe streets, started talking with his neighbors at a community garden. All of them, he found, are fed up with the speeding and crashes. In one particularly terrifying incident, a car crashed into a building’s pipes, flooding the residences with gas. People in the house got out in time, but “it’s a miracle it wasn’t a catastrophe,” he told Streetsblog.

Safe 8th Street Oakland is demanding that traffic calming measures are incorporated into a resurfacing project scheduled for next year. “They’re paving it anyway… let’s factor in for some speed humps and traffic circles, along the length, so we can make this a safe street for everyone,” Courtney told Streetsblog.

City officials responded to the request on Nov. 16:

OakDOT receives more than 800 requests from our community each year asking for traffic safety improvements. We evaluate every one. Because we have more requests and needs than we have resources to complete detailed studies, design improvements and implement changes, we evaluate each request by multiple factors to prioritize them. These factors include:

Each request evaluation results in a score based on the above factors. We are currently working on requests with a score of 70 or higher. We have evaluated your request, and its score is 58.

Courtney and the group want to know how the street got a 58, considering Prescott Elementary is bounded by 8th, the neighborhood group has documented continual and extreme speeding, and if West Oakland doesn’t qualify as an “historically underserved or underprioritized neighborhood,” it’s hard to fathom what neighborhood would.

Streetsblog has reached out directly to Oakland DOT for more information and will update this post. However, Warren Logan, policy director of mobility and interagency relations for the mayor’s office of Oakland, responded today on Twitter:

Hi there, just making sure you knew that I saw this, am taking it seriously and am already in talks with our DOT. Thank you for holding us accountable and championing safety for your neighborhood.

Whether there will be action remains to be seen. Robert Prinz with Bike East Bay is hopeful there’s still enough time to get fixes incorporated into the paving, which he doesn’t expect to happen until late 2021 or early 2022. For some time his group has also pointed out that the street needs a redesign and that Oakland “…staff members who I spoke with agreed, but the bike plan draft was not updated to reflect this.”

Meanwhile, Courtney is afraid the city will take no action to redesign the street until after the paving is done, and then will have to send in “rapid response” teams to add traffic-calming measures after a neighbor is killed. “We don’t want to be in a situation where that happens and they end up retrofitting the street,” adding that he hopes the city will prevent catastrophe by “…making use of the investment they’re already doing.”

Update 6 p.m., from an OakDOT spokesperson: “8th St. is scheduled to be paved in late 2021. 8th Street design is just getting underway and these requests for safety improvements will be considered.”