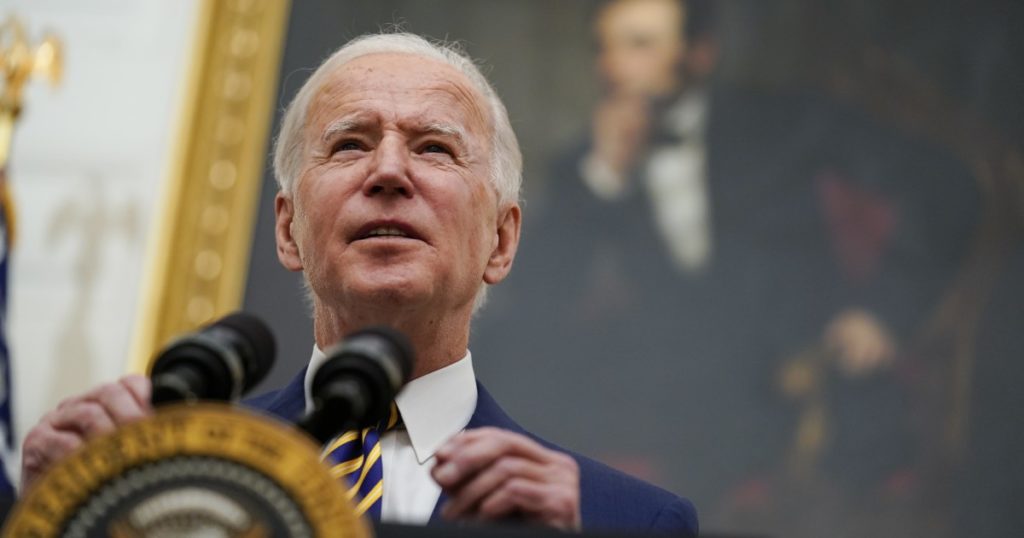 The days don’t begin and end with tweets. The press secretary hasn’t lied about crowd sizes or insulted reporters. White House events have carefully calibrated themes. And the president sticks to the script.

Washington is suffering whiplash — or enjoying it, depending on whom you ask — as President Biden takes over from former President Trump, a transition that stands as one of the starkest contrasts in U.S. political history.

After four years of chaos and controversy stoked by a media-obsessed president, the country is experiencing the jarring normality — and relative quiet — of a successor who watches far less television, empowers staff, does most of his work in private, and keeps more of his thoughts there, too.

Before the election, Trump mocked his opponent as “Sleepy Joe.” Yet many voters turned out to be desperate for someone less addled, angry and relentlessly divisive in the Oval Office. So far Biden has been happy to give them what they want, as he promised during the campaign.

On Friday, his second full day in office, he appeared in public just once, and talked about providing economic relief during the ongoing pandemic, a crisis that Trump all but ignored for months.

Political veterans of both parties said it was a welcome change.

“There’s an argument that not having the president, the federal government and a hurricane of nonsense front and center in the American people’s minds, every day, will be a good thing,” said Michael Steel, a Republican strategist who was a top aide to former House Speaker John A. Boehner (R-Ohio).

However, Steel said it’s too soon to say whether Biden’s style will produce legislative breakthroughs by which he’ll ultimately be judged.

“Real, substantive lasting change requires legislation. And we have a closely divided House and a closely divided Senate, and an extremely polarized electorate,” he said. “It remains to be seen whether this back-to-the-future style of policymaking is going to be effective on Capitol Hill.”

“If he fails on COVID,” Begala said, “no one will say, ‘Let’s reelect him because he never lied.’”

Two days after Biden took the oath of office, the White House campus remained a ghost town of unoccupied desks with new computer monitors. But already the administration had begun rebuilding the federal infrastructure for developing and analyzing policy, something abandoned by Trump in favor of governance by his daily whims.

Administration officials brief reporters on proposals that are laid out in lengthy, wonkish documents. Lawyers vet executive orders before they’re issued. The administration announced on Friday that Biden had asked intelligence officials and the White House National Security Council to produce an assessment on the threat of domestic terrorism.

Questions about more trivial topics that Trump had fixated on — like redesigning Air Force One — are shunted aside, sometimes with thinly veiled sarcasm.

“I can confirm for you here, the president has not spent a moment thinking about the color scheme of Air Force One,” White House Press Secretary Jen Psaki said Friday. Trump sometimes showed off a model of the plane with a revised red, white and blue paint job, including a darker blue underbelly rather than the lighter blues that date to the Kennedy era.

The new tone from the White House is most evident in the briefing room, where Psaki has replaced Kayleigh McEnany as the presidential spokeswoman.

McEnany worked for Trump’s campaign before moving to the White House, and she turned briefings into airings of grievances — his and hers — against the media. Most ended with mic-drop moments as she denounced Trump’s enemies and then all but fled the room as reporters continued to shout questions.

Psaki, who served as State Department spokeswoman and White House communications director during the Obama administration, has quickly reset the thermostat from overheated to room temperature.

“There will be moments when we disagree, and there will certainly be days where we disagree for extensive parts of the briefing even, perhaps,” Psaki said after the inauguration Wednesday. “But we have a common goal, which is sharing accurate information with the American people.”

It’s an adjustment for the press corps, some of whose members have no experience with presidents other than Trump.

“Everyone’s really excited for this briefing,” a White House photographer deadpanned to his colleagues Friday, as they gathered their gear and headed into the briefing room. “No one’s getting yelled at, belittled — it’s going to be really boring.”

Trump-era briefings were rare and, when they were held at all, featured a mix of misinformation and propaganda. Now they’re a daily rundown on White House events, and they include the standard evasions to questions as reporters try to pin Psaki down on issues that would drag her off message. For example, she has repeatedly declined to say whether Biden wants the Senate to convict Trump after his impeachment trial, which is expected to begin next month.

On Thursday, she gently shot down a question about Biden not wearing a mask during an inaugural television special filmed at the Lincoln Memorial.

“He was surrounded by his family,” she said. “We take a number of precautions, but I think we have bigger issues to worry about at this moment in time.”

The question was put to Psaki because the oft-masked Biden, in one of his first acts, ordered that anyone on federal property wear a mask and follow other pandemic precautions. Under Trump, the White House became a coronavirus hot spot, and many senior officials became infected because masks and social distancing were stigmatized.

During Biden’s public events, all officials are masked and spaced several feet apart. Others appear on video screens rather than in person. Medical-grade masks like N95s are common.

The White House itself has been swiftly refashioned. A portrait in the Oval Office of Andrew Jackson, idolized by Trump as a fellow populist outsider, was replaced by one of Benjamin Franklin. Two civil rights icons — California labor leader Cesar Chavez and Rosa Parks — are honored with busts. Near the press office, photos of Biden and Vice President Kamala Harris immediately replaced pictures of Trump.

Aides are getting settled in their new workspaces. One new staff member who came to work in the Eisenhower Executive Office Building, next door to the White House, said the offices had largely been cleared out when they arrived. But many desks and computers were left covered in dust, and at least one desk had an open box of souvenir Air Force One M&Ms signed by Trump. She dropped it in the nearest garbage can.

Like many new employees in the maze-like building, the aide had trouble finding the bathroom.

“It’s almost like first day of school,” she said. “You just don’t know where anything is, and you don’t know what teachers are good, bad or anything else.”