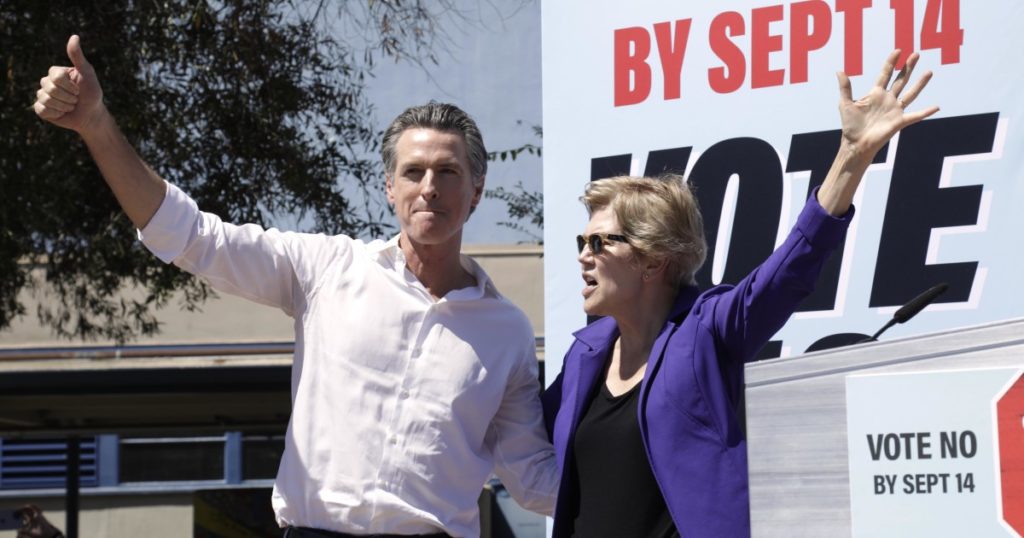 Sen. Elizabeth Warren stood side-by-side with Gov. Gavin Newsom in Culver City on Saturday and urged California voters to reject the effort to recall him from office, calling the top Republican candidate hoping to replace Newsom “California’s own Donald Trump.”

Warren warned that replacing Newsom could put California on a path toward becoming more like Texas, where Republican political leaders have instituted a strict new abortion ban, or Florida, where the Republican governor has tried to bar school mask mandates.

“Governors matter,” Warren (D-Mass.) said at the Newsom campaign rally at Culver City High School. “Just consider this week what we’ve seen in Texas: a state legislature and Republican governor who are willing to set vigilantes loose to prey on vulnerable women who want to make their own decisions about their bodies.”

With his political survival in peril, Newsom is leaning on an anti-recall campaign that relies heavily on multimillion-dollar spending on mostly negative ads along with support from Warren and other big-name Democrats, hoping it’s enough to persuade California’s left-leaning voter majority to cast ballots in what could be a tight, low-turnout election.

The Massachusetts senator has also been featured in a campaign ad for Newsom, denouncing the recall as a power grab by “Trump Republicans.” Her appearance is the first of several events planned with national Democrats who will descend on California before the Sept. 14 recall election — with President Biden and Vice President Kamala Harris also scheduled to join the fight.

On Sunday, Wisconsin Sen. Amy Klobuchar is slated to appear with Newsom at a rally in Santa Ana. Californians have also been peppered with television and social media ads featuring Sen. Bernie Sanders (I-Vt.), a favorite of liberal voters and winner of the state’s presidential primary in 2020, who says the last thing the country needs is a “right-wing Republican governor in California.”

The Newsom campaign’s one-two weekend punch of Warren and Klobuchar, both former presidential candidates, is a move that is likely meant to appeal to a broad spectrum of the Democratic Party — Warren with the most left-leaning voters and Klobuchar, a former prosecutor from the Midwest, with moderates.

Showcasing the strong support of two of the nation’s most powerful women in Congress also sends a signal to female voters, with whom Newsom enjoys strong voter support. Warren on Saturday did not hesitate to condemn Republican Larry Elder, the leading candidate trying to replace Newsom, for discriminatory comments he’s made about women and his opposition to abortion rights.

Alicia Coulter of Lakewood, whose company Advantage Health Now is performing outreach to Black residents in Los Angeles County about the benefits of COVID-19 vaccines, was among the hundreds of Newsom supporters who came to see Warren and the governor Saturday.

“We understand who Larry Elder is. He does not represent the Black community. He represents himself, and he represents Trump,” Coulter said. “If we vote for Elder, we will become Texas, and that’s scaring people.”

Meanwhile, at a campaign stop in Orange County on Saturday morning, Elder was taking swings at Newsom as well.

During his roughly 15-minute speech, Elder pummeled the governor for his November dinner at Napa Valley’s French Laundry restaurant while shutdowns battered the state and the fact that Newsom’s children attended in-person school while many of the state’s public schools were still relegated to Zoom classes. Elder sharply criticized Newsom’s housing, economic, environmental and criminal justice policies and record.

“He does not deserve another day, let anyone another term,” he said.

About a hundred people gathered on folding chairs and picnic tables outside the Asian Garden Mall in the heart of Orange County’s Little Saigon neighborhood for the event, which was geared toward the Asian community. Many attendees shaded their heads or fanned themselves with Elder bumper stickers and yard signs in the stifling late-summer heat.

“It’s perfect. It’s beautiful,” Elder supporter Estrella Harrington said of Elder’s speech after the event, saying the longtime talk radio host had addressed “all the things that we all have concerns about.”

With election day fast approaching and ballots already mailed to every registered voter in the state, Newsom is banking on the assistance of Washington Democrats to energize members of his liberal base who may be indifferent or unaware of the election.

Warren’s appearance aligns with the Newsom campaign’s strategy to nationalize the recall by conveying the effect it may have in Washington and nationwide.

Newsom has accused organizers of the recall campaign, and all the Republicans trying to replacement him, of being surrogates for Trump and promoting the former president’s false assertion that the 2020 election was stolen from him.

“This, in many ways, has become nationalized because the Republican Party understands the opportunity here,” Newsom told reporters after the event Saturday. “It’s an extension of the big lie and everything else they’re doing on voter suppression.”

Throughout the week, Newsom warned that the Biden administration’s agenda and the Democrats’ control of Congress would all be endangered if voters remove him from office and a Republican becomes California’s next governor.

Elder, a conservative talk show from Los Angeles, emerged as Newsom’s primary target, with the governor criticizing the Republican’s stance on abortion rights, among other issues.

“All those freedoms for women and girls, all that’s on the ballot,” Newsom told supporters during a Zoom call rally on Thursday. “He has been devout in his opposition of Roe v. Wade, just as he’s been devout in his opposition of federal funding for education, or federal funding for housing, or even his belief that FEMA as an agency should even exist.”

Newsom warned that if Elder becomes governor, he would also have the authority to appoint anti-abortion judges and fill political vacancies, including for the U.S. Senate. When Harris was sworn in as vice president this year, Newsom appointed then-Democratic Secretary of State Alex Padilla to take her place.

“Who would have Larry Elder appointed to replace Kamala Harris? Would Chuck Schumer be majority leader or minority leader right now? What would that mean to the Biden agenda?” Newsom said during a news conference Friday in San Francisco.

Elder hasn’t shied away from saying exactly what he would do if Sen. Dianne Feinstein, who at 88 is the oldest member of the Senate, steps down or become ill. Along with questioning Feinstein’s mental health, Elder said that if a Senate vacancy opened while he was governor, he would appoint a Republican — a move that would give the GOP the Senate majority and almost certainly derail Biden’s legislative agenda.

“I’m told she’s in worse mental condition than Joe Biden,” Elder said in an interview with conservative radio host Mark Levin this week. “They’re afraid I’m going to replace her with a Republican, which I most certainly would do, and that would be an earthquake in Washington, D.C.”

In California, the governor has the authority to fill a vacancy in the U.S. Senate without confirmation by the Legislature. If Elder becomes the next governor, the Democratic majority in Congress will be at increased risk, Warren said.

Republican strategist David Winston said the recall has captured the attention of Washington. The result could also have a major effect in the midterm election, when the GOP hopes to recapture control of Congress, as well as in contested governor’s races in other states.

If a Republican can be elected governor of California, Winston said, that provides hope for the GOP in blue states nationwide.