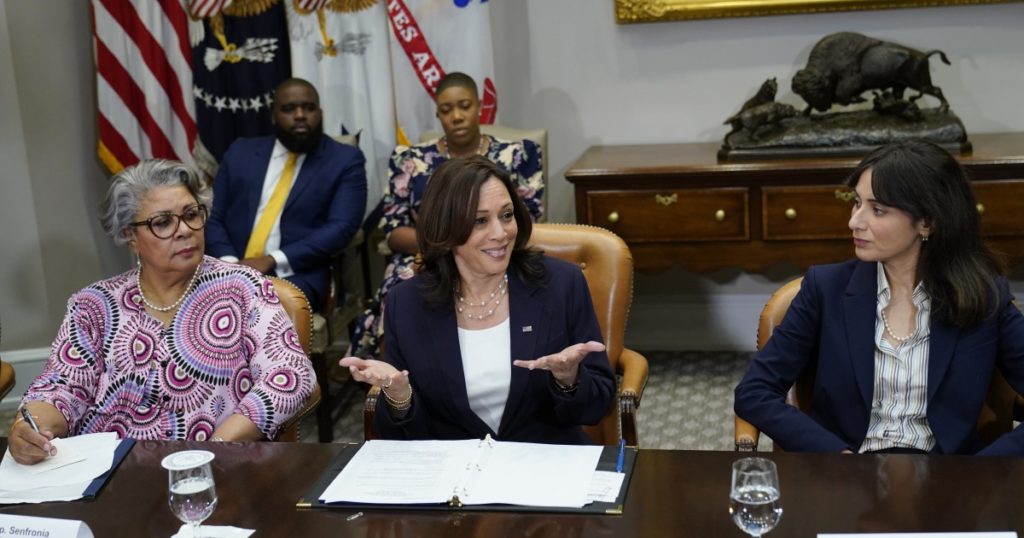 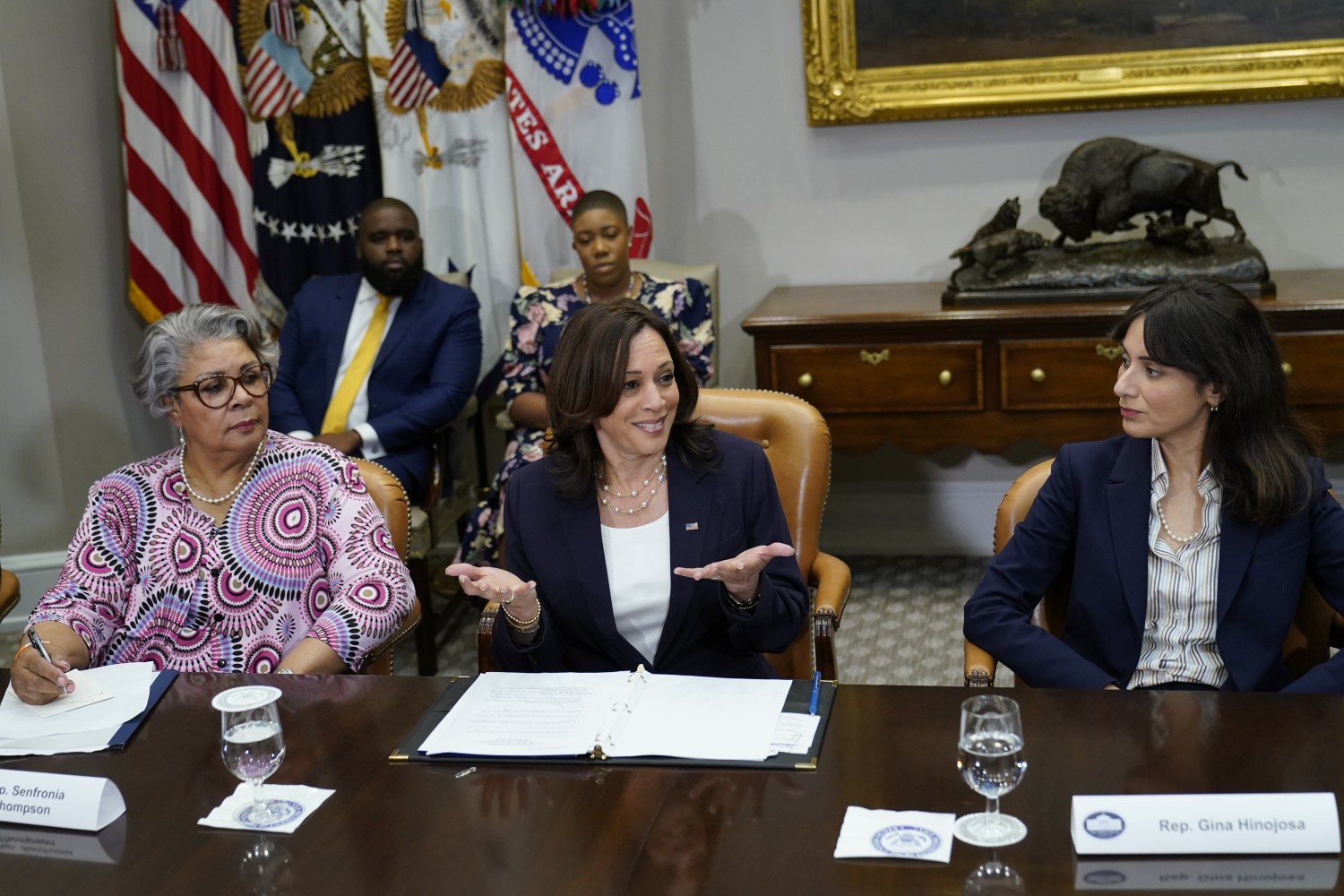 Vice President Kamala Harris held her highest profile event since grabbing the helm of the White House’s voting rights efforts earlier this month, meeting with a group of rogue Democratic state lawmakers from Texas Wednesday to highlight what they call a national threat to democracy.

Harris’ White House outreach could help galvanize opposition to a wave of Republican-led bills around the country that would likely curtail voting, but she faces a tough reality in Washington. A sprawling Democratic bill aimed at expanding voting rightsdoes not have the votes to win approval in the Senate, where it is expected to be debated next week. A second, more narrowly focused bill , the John Lewis Voting Rights act, also faces long odds.

Harris, who spent only four years in the Senate, is not playing a prominent role in Democrats’ longshot strategy to revive the bill known as the “For the People Act,” according to congressional aides. Instead, she is leading an effort to target hundreds of voting bills around the country, assembling coalitions of activists and business leaders to build pressure on Congress and hoping to spur new voters to register and motivate existing voters to turn out for the 2022 midterms elections, when Democrats could lose their narrow majorities in Congress.

The strategy underscores the limits of Harris’ ability to cut deals in Congress. Unlike President Biden, who served decades as an inside player on Capitol Hill before he became President Obama’s vice president, Harris, who built her reputation as a tough critic of the Trump administration in a more partisan era, has few major legislative achievements. But there is still opportunity for Harris to use her profile and experience on the issue in the Senate and as California’s attorney general to galvanize advocates and put a spotlight on state laws.

“The right to vote is a given,” Harris said during her meeting Wednesday. “What we are seeing are examples of an attempt to interfere with that right, an attempt to marginalize and take from people a right that has already been given.”

Her efforts coincide with several national campaigns, including a rally and march to the White House led by liberal faith leaders Wednesday morning.

Harris discussed voting with local leaders in Greenville, S.C. on Monday as part of a trip aimed primarily at promoting vaccines, and she plans a similar gathering in Georgia.

“If they don’t pass that (national) bill, that will be a rallying cry for many,” said Chip Felkel, a Republican consultant in Greenville. “Then it becomes their version of a culture-red meat issue, which is not dumb.”

Nate Persily, a Stanford University law professor who is one of the nation’s leading election law experts, said such efforts are unlikely to have an immediate impact in states that are already shortening polling hours, limiting the right to vote by mail, threating election officials with criminal penalties or otherwise narrowing options for voters. Legislatures in Georgia, Florida and Arizona — considered battleground states — have each passed new restrictions.

If Congress is unable to pass bills that could combat some of those efforts, the administration could try to persuade Congress to spend $1 billion to $2 billion a year to help beleaguered elections officials.

“What is she going to do on state legislation except complain about it?” he said.

Biden administration officials insist voting rights is a nonpartisan issue, despite the Republican push for restrictions, prompted most recently by former President Trump’s false claims that the election was stolen. Officials note that restrictions on mail-in voting, for example, would also hit many Republican voters.

“There’s no threat to the voting rights law,” he said last week. “It’s against the law to discriminate in voting based on race already.”

The “For the People” bill also includes many unrelated provisions, including lobbying and ethics rules changes and a requirement that presidential nominees release tax returns.

One White House official who spoke on the condition of anonymity pointed to the power the issue could have for Democrats in the next election. Trump, and the perception that he was a threat to Democracy, helped lead to record turnout in the 2020 election. Harris will be making the case around the country that voting rights bills represent an existential threat to democracy, a similar pitch.

Her meeting in Greenville lasted about 30 minutes, a small closed-door gathering with three activists at a YMCA during a trip to the state to promote COVID-19 vaccines.

Two of the people who attended said she mostly took notes and asked questions about what people were doing to register voters, the hurdles they faced in getting people to the polls and the work they were doing to alert people to the threat to voting rights.

The Rev. Telley Lynnette Gadson, an incoming district superintendent of the United Methodist Church, representing 18,000 parishioners and 102 churches, talked about her work getting people to register and vote. She put the current legislative fights in the context of the 1960s Civil Rights struggles that involved both of her parents and left her father with a bullet in his hip.

“Every time there’s a sense of galvanizing one demographic…then there we go with another hoop to climb over,” she said.

The Texas Democratic lawmakers, who walked out on the legislative session to stop passage of a Republican-led bill, spent Tuesday on Capitol Hill, trying to exert pressure on lawmakers to pass federal legislation. But they were unable to get a meeting with Sen. Joe Manchin, the West Virginia Democrat who is the main Democratic holdout. Instead, they met with his staff.

“When he hears the details of how bad the legislation was in Texas, I hope he understands,” state Sen. José Menéndez said at a press conference with House Speaker Nancy Pelosi as well as state and federal members of the Texas delegation.

The Texas bill would have made a number of changes, including banning drop boxes for mail-in ballots, limiting hours for early voting and giving more authority to partisan poll watchers.

“We see it playing out across the country, and it is not going to stop,” added Texas state Rep. Chris Turner.

But Texas Republicans have vowed to pass a similar bill eventually. And passing the federal bill would require Manchin to both reverse his position and agree to alter or end the Senate’s filibuster rule, which requires most bills to garner 60 votes to win approval.

Congressional Democrats familiar with the process said Majority Leader Chuck Schumer and other Democrats are continuing to negotiate with Manchin, but Harris is not known to have spoken with him. Manchin’s spokesman declined to comment.