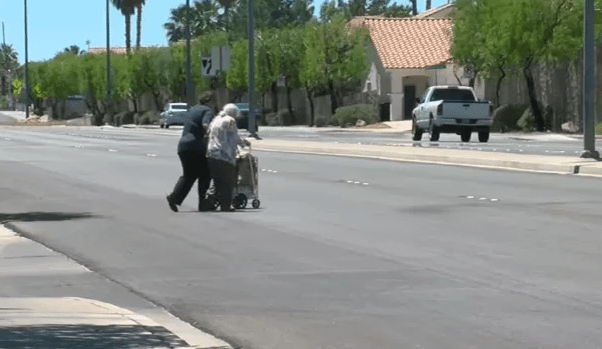 In a move that could become a model for states across the country, a new Virginia bill will soon prohibit police from utilizing one of the most common legal pretexts to harass, search, and even brutalize people of color on the street: that they were walking in the street outside of a designated crosswalk.

Though the finer details of the bill didn’t receive much national attention when Gov. Ralph Northam signed it into law in October, House Bill 5058 may have quietly made history as perhaps the first statewide repeal of the “jaywalking” laws that became our national default in 1928, when lobbyists from the still-nascent auto industry succeeded in getting the federal government to recommend the Model Municipal Traffic Ordinance to state and local governments around the country. That model infamously recommended that roadways across America be reserved explicitly for high-speed motor vehicle traffic, and that drivers be held legally blameless for injuring or killing walkers who enter the roadway outside designated crosswalks; a racist and classist public awareness campaign soon followed to build support for the laws.

Written in collaboration with advocacy group Justice Forward Virginia and introduced by Delegate Patick Hope (D-Arlington), the new law essentially reverses that precedent by explicitly “prohibiting a law-enforcement officer from stopping a pedestrian for jaywalking,” while also amending the state’s traffic code to specify that “where intersections contain no marked crosswalks, pedestrians shall not be guilty of negligence as a matter of law … when crossing by the most direct route.”

(Translation: if the closest stop light is hundreds of feet away but their destinations are located just across the road, pedestrians won’t be risking a fine — or an interaction with police officer that could turn deadly for a person of color.)

“It’s certainly groundbreaking,” said Gregory Shill, associate professor of law at the University of Iowa and a street safety advocate. “When it comes to the laws that regulate our roads, we struck a bargain in the social contract almost a hundred years ago between speed [for drivers], safety for pedestrian, ease of commerce, and all these other uses….This bill is one of the more major renegotiations of the social contract that I’ver have seen.”

Other advocates emphasized the specific implications of the laws for people who live in areas with poor or no pedestrian infrastructure, as many communities of color are more likely to do.

“I find it disingenuous to hold accountable a population for jaywalking when they lack the proper infrastructure to traverse their communities safely to begin with,” professor and transportation researcher Charles Brown told the Virginia Mercury. “People jaywalk out of necessity, so I find it unjust that we are targeting those who jaywalk when they are basically responding to the environment which they have been given.”

.@HopeforVirginia says of his bill to end pretext stops: “Whenever I’ve been pulled over, I’m anxious. But over the last three months, I’ve spoken to too many people of color who’ve said that when *they* get pulled over, they’re in fear for their lives.”

The new policies are part of a larger effort to end police brutality and harassment in the Old Dominion that became the focus of a special legislative session in the wake of the George Floyd uprisings this summer. The traffic stop is the most-common setting for interaction between law enforcement officers and the public, and both motorists and pedestrians of color are disproportionately likely to be targeted; Black men, in particular, are roughly twice as likely to be killed by police in their lifetime than the general population.

Drivers may be less likely to interact with the police as a result of HB 5058, too. The law also prohibits officers from stopping or searching a road user simply because they detect an “odor of marijuana,” or from stopping drivers solely for committing certain minor motor vehicle code violations that do not directly impact the safety of other road users, like failing to illuminate their license plate or using sun-shading window films.

Still, experts caution that the new laws have their limits – and how they’ll be interpreted in the courts when they go into effect on March 1 remains to be seen (after all, courts have typically given officers wide latitude for the reasons for a search). Despite making it illegal for police officers to stop Virginians simply for walking in the “wrong” part of the street, HB 5058 still states that “pedestrians shall cross, wherever possible, only at intersections or marked crosswalks,” which could mean that “jaywalking” is still enforceable when committed in concert with other crimes. And Virginia lawmakers certainly didn’t go so far as to declare that drivers bear the primary responsibility for keeping other road users safe — even though they’re the ones piloting a vehicle that can kill another person.

“There are still a lot of unanswered legal questions here,” said Shill. “What does it mean that a pedestrian must cross at a crosswalk where ‘possible’? Say you’re on a rural road, and the nearest crosswalk is half a mile away; is that really a ‘possible’ crossing? Then there’s the next layer; if a pedestrian is found to have violated this new version of the rule, what are the consequences of violating it?  And then there are all the real world consequences of violating — or being suspected of violating — that rule, apart from the legal consequences, such as an armed interaction with a law enforcement officer.”

Nonetheless, Shill says the law is a step in the right direction for Virginia, and comparable legislation could benefit other places — and ideally, push their policies even further,

“We should think more creatively not just about how we regulate our streets, but how we enforce those regulations,” said Shill. “When you have a flawed institution with a ton of discretion about how to apply the law, and then you arm them, of course that creates problems. This bill removes some of that discretion, and that’s a good thing. But there are a lot of traffic rules that are in the public interest and need to be enforced — but a lot of them can be enforced by a camera, instead of with an officer with a weapon.”