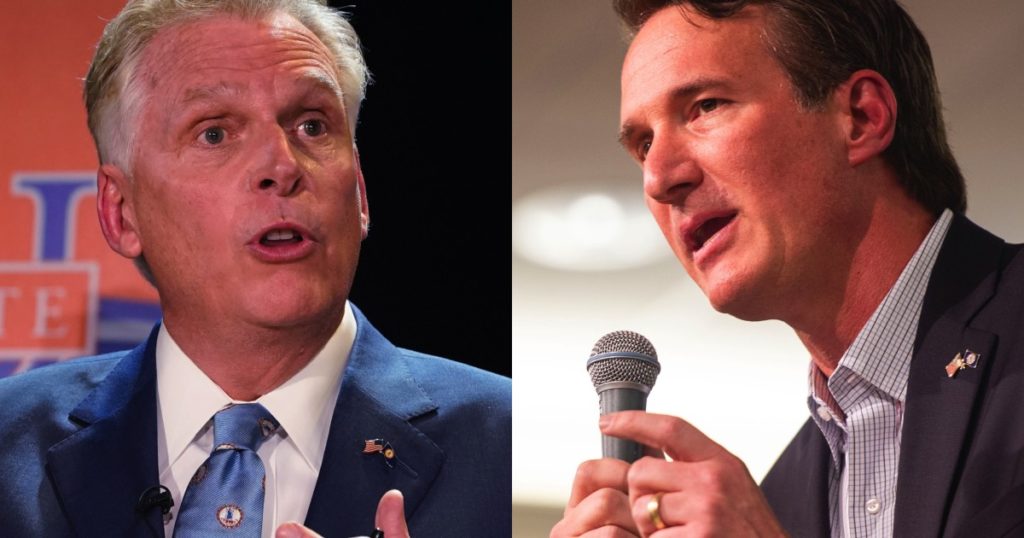 The Republican candidate is a wealthy businessman and political novice who questions the integrity of the electoral system.

The Democratic frontrunner is an old-school career politician with deep roots in the party establishment.

Just months after Joe Biden won the presidency on a wave of anti-Trump sentiment, a rematch by proxy is shaping up in Virginia, which is picking a new governor in 2021.

The leading candidate in Democrats’ June 8 primary is Terry McAuliffe, a former Virginia governor seeking a comeback by following the Biden playbook — emphasizing his experience, railing against Trumpism.

One of two states holding gubernatorial elections this year, Virginia provides the first big test of strength between the parties since Biden was elected, and it could set the tone for the 2022 midterm election.

For Republicans, the face-off will be a test of whether their candidates can succeed in holding the Trump base while courting swing voters. Youngkin is framing the election as a potential referendum on Biden’s progressive policies, not Trump’s legacy.

“Trump’s not on the ticket,” Youngkin said in an interview after addressing a rally here in Clifton, a northern Virginia suburb of Washington. “The administration in Washington has moved so far left and moved so quickly, that when a state like Virginia stands up and says no, and an outsider like me beats Terry McAuliffe, it’s going to be a big statement.”

But Democrats are moving quickly to define the political novice as an acolyte of the former president — a strategy designed to spark 2020-style enthusiasm and turnout without Trump actually being on the ballot.

“He is an extreme right-winger in the same mold as Donald Trump,” McAuliffe said in an interview. “I am not going to let Glenn Youngkin do to Virginia what Donald Trump has done to the country.”

But the state in recent years has tilted increasingly Democratic — Biden won it by more than 10 percentage points, about twice Hillary Clinton’s margin in 2016. Republicans have not won a statewide election since 2009.

Republicans improved their chances of ending that losing streak in 2021, analysts say, by nominating Youngkin. Establishment party leaders were especially relieved that the nomination was not won by Amanda Chase, a state senator considered the most provocative of the alternatives. Known as “Trump in heels,” Chase was kicked off of her legislative committees after she participated in the Jan. 6 rally that preceded the storming of the Capitol by Trump supporters.

Youngkin, 54, is a former co-chief executive of the Carlyle Group with a reported net worth of more than $200 million — deep pockets that could help make him the first GOP candidate in a decade that can compete with Democrats financially.

The political newcomer has a sparse record on policy and political issues. He avoided defining himself further during the GOP nomination fight, an advisor said, by shunning most of the questionnaires put to candidates by special-interest groups.

That could make it easier for him to execute the tricky political balancing act that will confront all Republicans in competitive midterm races to come.

“This is going to be a test about whether or not a candidate can appeal to a Trump base in a nominating battle then pivot and win suburban voters,” said Bob Holsworth, an independent political analyst in Virginia. “They nominated someone who looks like he might have the capacity to do that.”

During the GOP nominating contest, Youngkin put out a plan to ensure “election integrity” — a central issue for Trump supporters who believe the former president’s false claims that Biden did not legitimately win the 2020 election.

The morning after Youngkin won the nomination, Trump issued a statement praising him: “He knows how to make Virginia’s economy rip-roaring, and he has my Complete and Total Endorsement!”

Youngkin embraced the conservative agenda of gun rights, opposition to abortion, low taxes and criticism of flashpoint social issues like teaching critical race theory in schools. But he has quickly tried to put more distance between himself and Trump’s signature grievance about the 2020 election.

“I have said before that Joe Biden was legitimately elected our president,” Youngkin said in a Fox Business interview. “I mean, he took the oath. He’s sleeping in the White House.”

Chase dropped her threat to run as an independent and instead endorsed Youngkin. But she made it clear that she would keep his feet to the fire on supporting Trump’s agenda. Asked how important Trump and his agenda would be to Republicans’ success, she answered in a text message, “Considering 1.9 million Virginians voted for him this past November, I would say it’s very important.”

In the Democratic primary to succeed Gov. Ralph Northam, McAuliffe’s top rivals are two Black women — state Sen. Jennifer McClellan and Jennifer Carroll Foy, a former member of the state’s House of Delegates. Also running are progressive state Delegate Lee Carter and Lt. Gov. Justin Fairfax — another Black candidate who might have been a leading contender had he not been confronted with sexual assault allegations.

McAuliffe, 64, is dominating in polling and fundraising over that diverse field of younger candidates — a path reminiscent of Biden’s victory in the 2020 primary contest over a large field of rivals that included candidates of color and many women.

Even before he was a candidate, McAuliffe was practically anointed by Biden, a close friend for decades. During a Virginia presidential campaign event in March 2020, then-candidate Biden jogged onto the stage, thanked McAuliffe for his introduction and hailed him as the “once and future governor of Virginia.”

Like Biden, McAuliffe is making his political and governing experience central to his campaign. A prolific fundraiser with party connections that span decades, he is very close to Bill and Hillary Clinton, served as chairman of the Democratic National Committee, and made an unsuccessful bid to be Virginia governor in 2009. He came back and won in 2013 — a rare exception to the trend that the party out of the White House typically wins in Virginia.

He left office in 2017 because of Virginia’s ban against governors serving consecutive terms. Now he is essentially seeking a second term, touting his record of overseeing economic growth, restoring voting rights for many felons, and vetoing conservative social policies approved by the state Legislature, then controlled by Republicans.

McAuliffe jokes about complaints that his bid for another term now is a throwback to an earlier political era. “Over time, I’m like a good wine. I get more seasoned,” he said at a recent campaign event about economic policy.

His candidacy has generated some tension among progressives who had hoped that in 2021, with Carroll Foy and McClellan in the race, Virginia could elect the first Black female governor in the nation.

His rivals warn that nominating a safe, familiar candidate like McAuliffe might not generate the enthusiasm and turnout Democrats need to beat Youngkin.

“If we have two wealthy patriarchal guys at the top of the ticket trying to out-scream each other, outmatch each other, who’s that going to inspire to come to the polls?” Carroll Foy said in an interview.

“We need a candidate who is going to motivate our base and expand our base,” said McClellan.

But McAuliffe has marshalled support from a phalanx of Black mayors and legislators from across the state. Like Biden, he benefits from the pragmatic streak among many older Black voters, who want a candidate who is experienced and the safest bet to win.

“I personally want somebody who knows the job, who has done the job, who can hit the ground running,” said Virginia State Senate President Louise Lucas, who is Black. She travelled from Richmond to McAuliffe’s home in northern Virginia early last year to urge him to run.

McAuliffe could pick up swing voters like Jack Runfola, a veteran in Sterling, Va., who has been an independent split-ticket voter in the past. He hasn’t decided whether to vote for McAuliffe in the primary, but is put off by Trump’s endorsement of Youngkin. “That’s the kiss of death for me and my wife,” said Runfola.

But Youngkin’s supporters are optimistic that he can carve out his own identity and turn voters’ focus from Trump to Biden.

In the Virginia suburbs, “people voted for Biden here because they didn’t want Trump in their living rooms for another four years,” said former Rep. Tom Davis (R-Va.). “Biden has misread his mandate by governing left. People are looking for something new.”