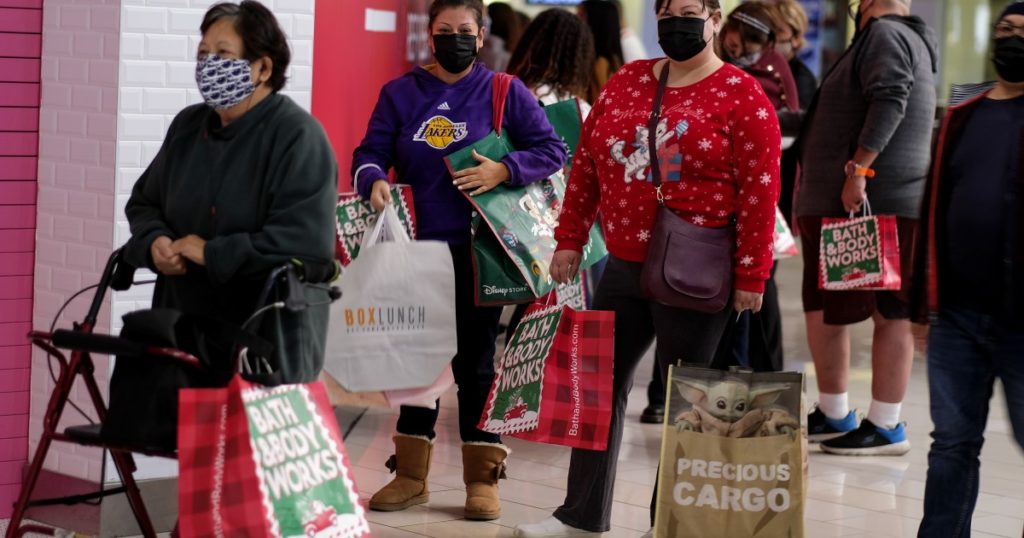 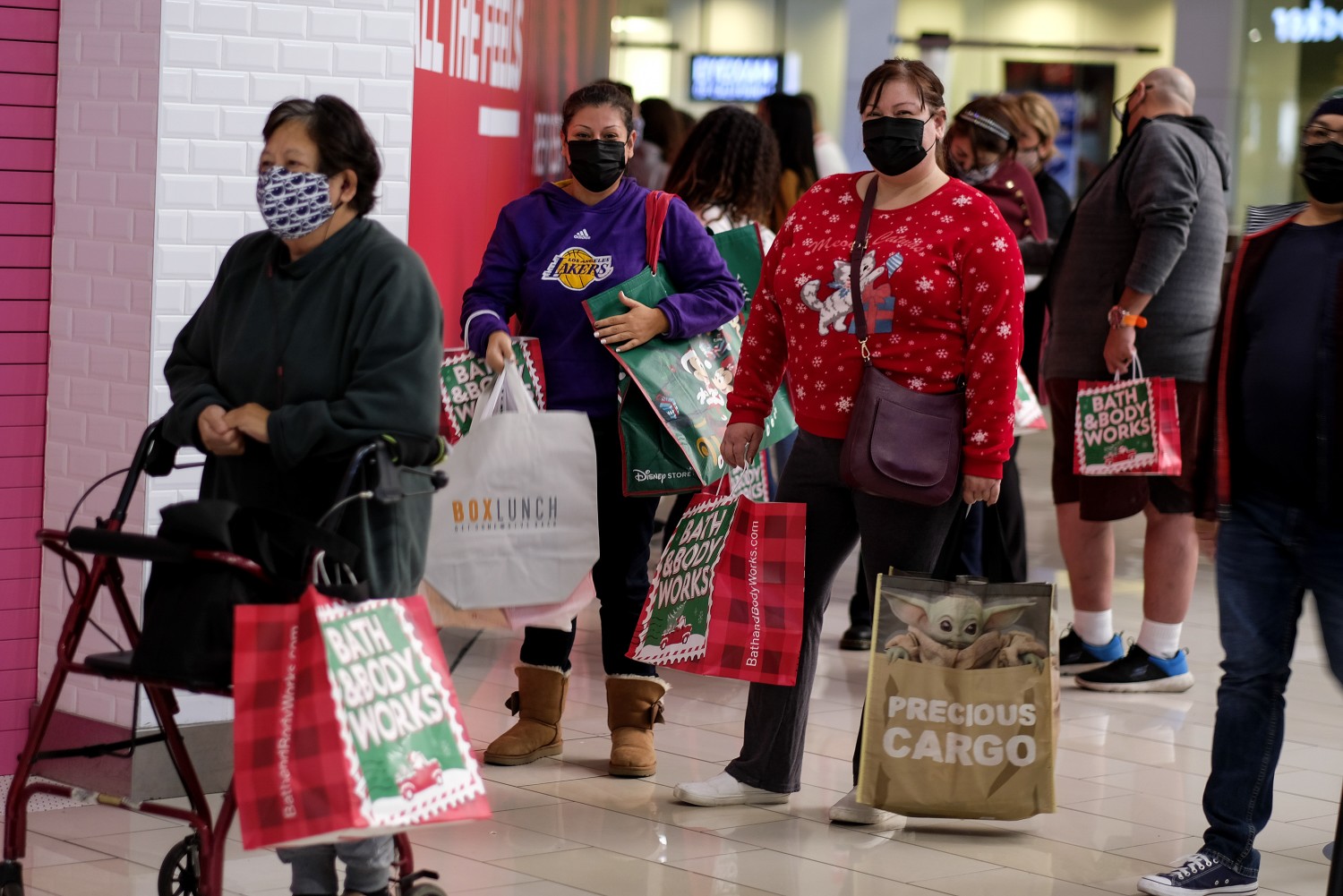 If the new COVID-19 vaccines prove effective and are widely accepted, the result could be a welcome surge in the nation’s economy as well as an end to the pandemic nightmare.

That’s because millions of Americans, especially those in higher income brackets, have been working from home, limiting both their outside contacts and their spending of billions of dollars on such things as travel, restaurant meals, trips to the mall and entertainment venues.

Many economists think that once it’s safe to return to normal life — perhaps toward the middle of 2021, public health officials suggest — this pent-up demand could deliver a massive boost to the battered economy.

While carefully hedging with caveats, the Fed raised its growth projections, said it would keep buying bonds to support growth, and indicated it would hold interest rates near zero for at least three years.

“The coming months will be challenging,” Fed Chairman Jerome H. Powell told reporters at a virtual news conference. “At the same time, people are getting vaccinated now. They’re getting vaccinated. You have to think that sometime in the middle of next year, you will see people feeling comfortable going out and engaging in a broad range of activities. My expectation is that the second half of next year, the economy should be performing strongly.”

The central bank’s optimism was echoed by some outside economists.

“There absolutely is a strong case for that pent-up demand to be unleashed, perhaps starting by next summer,” said James Bohnaker, an economist at IHS Markit. The forecasting firm last week sharply upgraded its economic growth projection for next year, to 4.3% from 3.1%, in good part because of better-than-expected news on vaccines and expectations of more federal relief.

Congressional leaders said Wednesday that they were close to a deal providing nearly $1 trillion in additional relief for individuals and small businesses, after a months-long partisan impasse.

Consumer spending drives the economy, but the pandemic has pushed the household savings rate to unusually high levels, particularly among higher-income households. Moody’s Analytics estimated that through October, Americans have saved about $1.4 trillion more than they would have in the absence of a pandemic.

Upper-income households have the ability to “unleash the money once they have the green light to do so, [and] the savings rate could fall to the pre-COVID level pretty quickly,” said Michelle Meyer, head of U.S. economics at Bank of America. “And that would be an extraordinary boost to consumer spending.”

There is nonetheless plenty of uncertainty ahead, particularly about how quickly and widely the population will be inoculated, and just when people will feel comfortable enough to return to their pre-pandemic routines.

No economic surge can erase the damage COVID-19 has inflicted, especially among low-income workers and members of racial and other minorities. Moreover, the rollout of vaccines will take months to reach enough people, while infections, hospitalizations and deaths are expected to continue at high levels through the winter.

Yet the economy overall has been surprisingly resilient, even as the slowdown has fallen hardest on the most vulnerable Americans. It has already made up about two-thirds of the output losses suffered in early spring. Consumer spending, which accounts for about 70% of the gross domestic product, is even further along in its recovery.

Though retail sales fell in November, household spending on goods has fully recovered and then some, thanks to a sharp rebound for car sales, home furnishings and clothing. In April, purchases of autos plunged to an annual rate of 9 million vehicles, but they bounced back in September and October to an annual pace of 16 million.

To put that in historical perspective, during the financial crisis in 2008 and its aftermath, monthly car sales remained below the 16-million-a-year rate for 75 straight months, according to Moody’s Analytics.

The difference this time is that the economy didn’t slide into the recession overloaded with debts and subprime mortgages. The 2008 housing bust and highly leveraged lending hammered the financial system and kept consumers languishing in debt for years after the Great Recession ended in mid-2009.

The pandemic has hit lower-income households especially hard. Yet with the swift passage of a $2.2-trillion federal relief package in the spring, many of them have been able to keep up their spending — until recently. The prospect of key relief programs fully lapsing at the end of the year has been the impetus for House and Senate leaders’ 11th-hour negotiations this week for additional aid.

Analysts are hopeful that lawmakers will strike a deal, including expanded jobless benefits, to cushion many households until the pandemic eases.

Meyer, the Bank of America economist, cautioned that consumers’ robust online spending on goods in recent months may hold down some future purchases.

She also expects the sizzling housing market to moderate. Because most people’s spending is based on their employment and income — and the confidence they have about job security — a lot will depend on what happens in the labor market.

Still, Meyer expects pent-up spending — and that it could be big.

Stephen Levy, an economist in Palo Alto, considers himself a typical example of a professional little affected by the pandemic financially. Like many consumers, he and his wife have shifted a lot of purchases to the internet. Even so, some shopping, such as for clothes and shoes, “we really don’t like to do online.”

He is optimistic that the economy will take off after mid-year in 2021, with California outperforming because of its larger dependence on foreign students, tourism and entertainment.

Levy, who directs the Center for Continuing Study of the California Economy, said there’s also pent-up demand among foreign travelers and students who haven’t been able to come to the U.S. Getting the pandemic under control will help restore that demand, Levy said, and the nation — and California in particular — will benefit as well from a reversal by the incoming Biden administration of “unwelcoming immigration policies.”

Many Americans also want to make up for lost travel opportunities, and some have made plans to double the number of trips in the new year. More likely, IHS’s Bohnaker said, people will “probably just spend a little bit more, take a higher-scaled vacation than they would have otherwise. You didn’t go on vacation last year, so maybe you’ll splurge this time around, take a few extra days or something like that.”

He and other experts say people will be constrained, however, by time as well as crowds if everybody is trying to travel at once.

Richard Curtin, director of the University of Michigan monthly survey on consumer sentiment, said the latest surveys indicate that consumers, particularly those who identify as Democrats, have become more optimistic about the long-term economic outlook. And that bodes well for spending down the road.

But Curtin said predictions are fraught, given the lingering uncertainty and shifts in consumer behavior as a result of the pandemic.

“People have changed their spending habits,” he said. “Their home is their classroom, their office, where they recreate, where they exercise, all of that kind of stuff. And it will be more difficult this time to forecast what is going to receive those pent-up funds.”