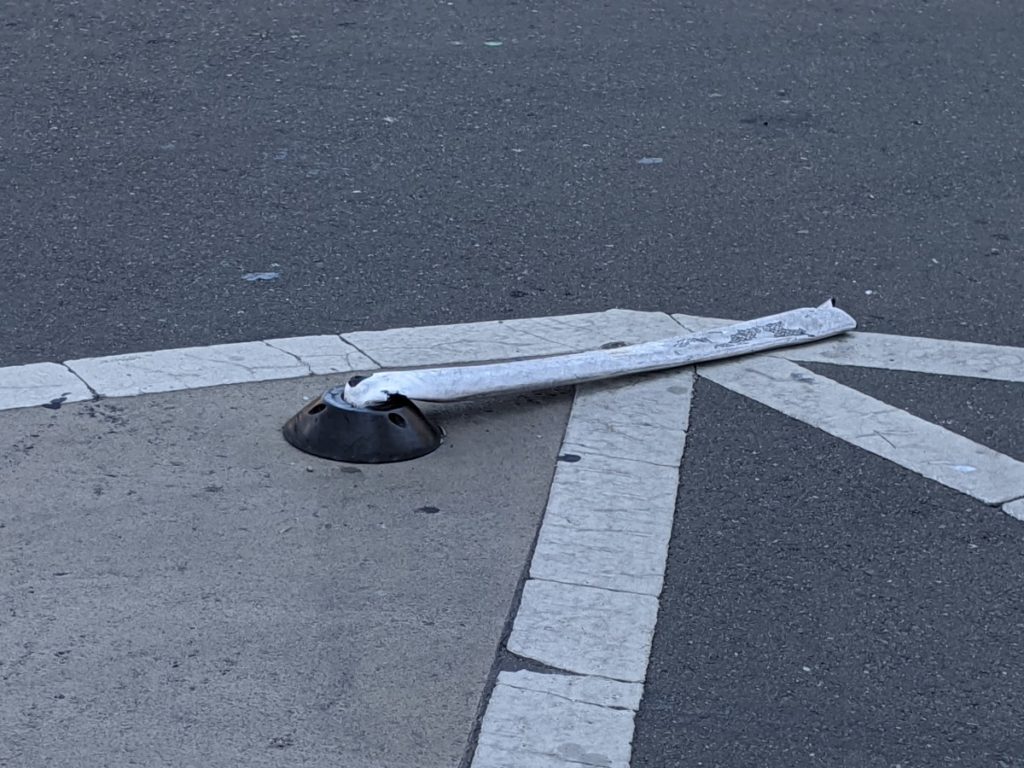 The Tenderloin, one of San Francisco’s most dangerous neighborhoods in terms of traffic deaths and injuries, is getting a series of safety improvements, including selective lane closures and “no turn on red” signs. It will also be the first neighborhood in San Francisco to have the speed limit lowered from 25 to 20 mph.

Supervisor Matt Haney, whose district encompasses the Tenderloin, pushed for the changes:

The Tenderloin will become first entire neighborhood in San Francisco with a 20mph speed limit.

We are also implementing “no turn on red” at 54 intersections.

Every street in TL is on the high injury network for collisions, which accounts for 75% of city collisions & fatalities

But the speed limit reduction depends on signs and traffic enforcement–and some paint and plastic posts to encourage people to take turns slowly. There’s nothing to force motorists to drive at a safe speed.

But they have to respect the laws of physics.

After I wrote about the death of Mark Berman on Geary, I was told by an SFMTA official that there is no way to stop a motorist who is so reckless that they’ll blow red lights and go 100 mph on city streets. Too many engineers and planners don’t get that their street designs are what make reckless driving possible in the first place. Most of San Francisco’s streets are so wide and straight that speeding is not just possible, it’s almost encouraged.

But imagine driving 100 mph through this intersection in Paris:

It doesn’t matter if you’re Mario Andretti or Mr. Magoo, go much faster than 20 and you will hit a pole or a tree. Steel poles and the traffic cop of physics make it impossible to speed. Those poles were added specifically to force drivers to slow down as they navigate between Rue Lamark and Rue Caulaincourt.

Using physical obstacles to narrow lanes, tighten turns, control speeds, and stop encroachments is understood in the Bay Area on some level. But instead of steel, the city relies on “silly straws,” better known as safe-hit posts, to encourage motorists to slow down and stay in their lane.

I’ve watched cars drive over entire blocks worth of safe-hit posts. It’s such a common problem, the SFMTA couldn’t even manage to find a picture for its Tenderloin safety project web page that didn’t include a broken safe-hit post:

I’ve asked, multiple times, why the SFMTA continues to use plastic straws instead of steel or concrete to force motorists to slow down and stay in their lanes. It’s not that K-rails, steel posts, and concrete planters are prohibitively expensive or difficult to install. I was told on the q.t. that the city just doesn’t want the liability from its installations smashing up people’s cars.

Four people have already died in the last few weeks in San Francisco’s ongoing epidemic of traffic violence, next to Lake Merced, in SoMa, and, most recently, on Ingerson in the Bayview.

The deaths in SoMa and Lake Merced, like so much of San Francisco’s road violence, were caused by egregiously reckless drivers who are clearly to blame. But how far would those drivers have gotten if most San Francisco streets had tightly spaced, Parisian-style steel posts and concrete blocks that made it all but impossible to go faster than 20 mph? Isn’t it likely one or both of them would have smashed up without killing people?

Lowering the speed limit to 20 in the Tenderloin, and everywhere in the city, is long overdue. Now SFMTA has to re-engineer the streets, swapping plastic and paint for steel and concrete, to make driving and parking in bike lanes, whipping around turns, sweeping fast across crosswalks, and significantly exceeding that speed limit all-but impossible.