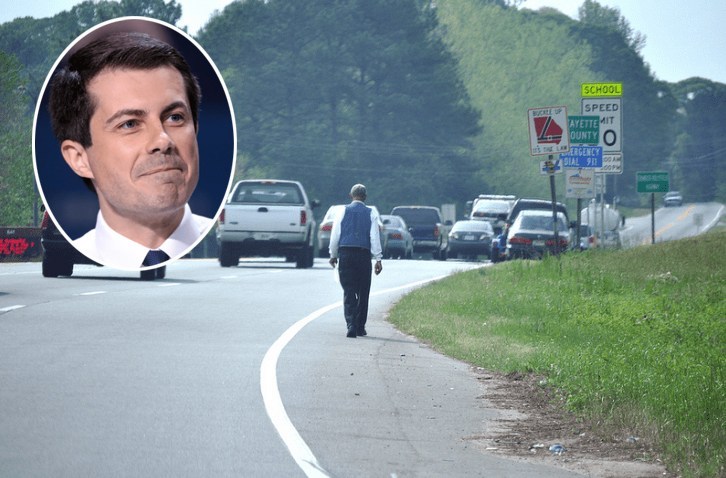 Take one glance at the US DOT’s sprawling org chart, and you’ll see a gaggle of departments dedicated to the needs of motorists, transit passengers, air travelers, maritime shipping magnates, pipeline operators, and more. But what you won’t find is an office dedicated specifically to the needs of people who walk, bike, or use wheelchairs to navigate our country’s streets — a group that includes every single American for at least a part of every journey they take.

Now, advocates are hoping that the next administration will finally do something to address that glaring omission — and usher in a sea change in the way our federal government thinks about the safety and convenience of vulnerable road users.

Prior to the November election, nonprofits People for Bikes and the Rails-to-Trails Conservancy set for an agenda for the next administration that included what seemed like a longshot: the establishment of an Active Transportation Administration within the federal DOT. But when the news broke that former South Bend Mayor and Vision Zero advocate Pete Buttigieg would lead the department, that Hail Mary began to look a little more realistic.

And in the wake of a terrifying surge in car crashes in 2020, it’s a more urgent mandate than ever.

“We’re running on a dozen years of relentless increases in traffic violence,” said Kevin Mills, vice president of policy for Rails-to-Trails. “If we don’t want to find ourselves even worse off in four years than we are now, we need to need structural change to make sure that policy innovations can come in alongside infrastructure investment.”

Now, advocates are joining Mills and his colleagues in dreaming big about how structural change could make active transportation a priority at the US DOT — and what our cities might look like with better federal funding and leadership.

People outside of cars don’t just lack a champion at the nation’s highest transportation office right now. They’ve never had one.

“I don’t know that there has ever been a pedestrian safety czar; certainly not in title,” said Doug Hecox, a spokesperson for the Federal Highway Administration, which is within the US DOT. “Pedestrian safety is a shared responsibility — the FHWA bears some responsibility, the Federal Transit Administration bears some, the National Highway Traffic Safety Administration bears it, too… But at the end of the day, it’s very much a local issue. I don’t mean to sound like I’m passing the buck at all, but our state and local agencies are better equipped to address the needs of people on the ground than we are.”

Congress has generally agreed that sidewalks are best paid for by the regional transportation leaders who understand their cities best — even if they’ve been all too happy to provide massive, highly flexible subsidies for driver-focused infrastructure like highways. Federal funding for sidewalks and protected bike lanes tend to get tacked onto car-focused road (or, more rarely, transit) projects to “complete” new or newly-renovated streets, if it’s funded at all — and there’s never been any form of “Federal Sidewalk Act” that would rival the legislation that built our national highway network.

Even the largest pot of federal money that’s specifically dedicated to active transportation infrastructure — called the “Transportation Alternatives Set-Aside” — is actually only a portion of a pool of money that’s reserved primarily for drivers. (Presumably, driving is the default mode to which sidewalks are the wacky “alternative,” at least in the eyes of the DOT.)  The set-aside is carved out from the the larger Surface Transportation Block Grant program, which provides states with flexible road funding based on a federal formula. Of the $12.1 billion in the program, only $850 million (or roughly 7 percent) is set aside for active transportation, and that money is then divvied up across the entire country.

And that subset of the pot doesn’t usually stretch very far. Tennessee, for instance, received only $19 million from the set-aside last year, but Nashville alone needs an estimated $750 million in the next five years to catch up with its sidewalk maintenance backlog and simply start plugging the most dangerous gaps in the city’s walking infrastructure network.

That measly 7-percent share shrinks even further when you factor in the billions that states collect from the six other formula programs that the DOT administers, most of which guarantee no money for stuff like bike lanes at all. Add it all up, and the set-aside makes up just 1.9 percent of all federal DOT funds given out last year — even though, to repeat the DOT’s own mantra, everyone is a pedestrian at some point in his, her or their day.

On a policy level, the vacuum in walking and biking leadership is even more alarming. Even the most common-sense laws have struggled to gain traction without a dedicated champion fighting for them — like ending the loophole that allows states to still collect federal funding even when they set safety “targets” that would allow more people to die on their roadways than in years prior (essentially removing all incentives to to curb pedestrian and cyclists deaths). Even the Department’s dedicated roadway safety agency, the National Highway Traffic Safety Administration, has historically focused on reducing road user death toll through a troubling narrow mission shaped around “education, research, safety standards, and enforcement” alone — a scope that doesn’t even include the infrastructure-based safety solutions that most experts agree are the key to saving lives.

“NHTSA’s main wheelhouse is improving car technology — particularly for vehicle inhabitants,” said Mills, citing the agency’s glaring omission of pedestrian crash standards from its New Car Assessment Program.  “What we want is for people not to get hit by cars in the first place. [On infrastructure], there are people in the Transportation Alternatives program who are doing good work, but there are too few of them, they’re buried too far down in the hierarchy, and they’re not empowered to bring a whole-agency focus to big problems — like ending the traffic violence epidemic.”

What an active transportation administration could do

If active transportation were given a real voice at the DOT, Mills is optimistic that those massive blind spots could shrink — and with time, make the needs of non-drivers a funding and policy focus, rather than an afterthought.

In its most robust form, an active transportation administration could, theoretically, fight for a much bigger slice of the DOT pie than the crumbs currently thrown to “alternative” modes — and potentially invest it in the kind of walking- and biking-focused programs that fall outside the traditional purview of agencies that focus on the needs of drivers first. (Think a dedicated program to improve wheelchair accessibility on all US streets, or a sweeping federal greenways act — both of which hang long been on advocates’ wishlists.)

Setting up a new office alongside big-money agencies like the Federal Highway Administration, the Federal Transit Administration — and, uh, whatever the Saint Lawrence Seaway Development Corporation is – would require the cooperation of Congress, but Buttigieg and Biden could get to work on day one to push for their colleagues to fund the office as part of the new infrastructure package that Biden has promised to introduce in his first 100 days in office.

But even without a whole new agency, Buttigieg could still do a lot to elevate the status of active transportation in the DOT. Mills says the Secretary doesn’t need the authorization of Congress to appoint a biking and walking czar — and by simply empowering one person to fight for the interests of vulnerable road users across all existing agencies, he could help solve the multi-pronged problem of ending car dependency in America.

“The real question we really need to ask is, ‘How can we make transit, walking and biking work together to collectively provide a viable alternative to driving?’” Mills said. “Not just, ‘Is there a recreational trail nearby,’ but ‘Can you safely and comfortably get to the closest rail station without a car?’ We think that holistic community design is an under-appreciated strategy to improve street safety, but the DOT isn’t set up to address that.”

A third way, Mills said, would be to simply up the funding for “alternative” modes in the discretionary grants the department will oversee — grants that Deputy Secretary-nominee Polly Trottenberg, who has more than a little experience implementing Vision Zero policies, will be most directly charged with administering — and give the person in charge of administering the set-aside more power to communicate across the agencies.

But whichever route we take to build power, there may be no better time to install a dedicated active transportation champion in the DOT — especially as states scramble to keep their residents moving despite COVID-ravaged transportation revenues.

“What I’m hearing from so many communities right now is that they’re struggling to ensure that they’ll have the money they need,” said Hecox. “And I’m confident that there are similar challenges being faced by communities of every size nationwide as they wrestle with how to find the money to build things like new sidewalks and bikeways. They’re all looking to the federal government because the state resources have, essentially vanished.”

Whether active transportation will get the resources it needs, ultimately, is a question for Congress as it contemplates the next infrastructure bill. But giving people who walk and roll one cohesive voice in Washington could be a good start — and an essential tool in the fight to change the federal structures that underlie our broken transportation landscape.