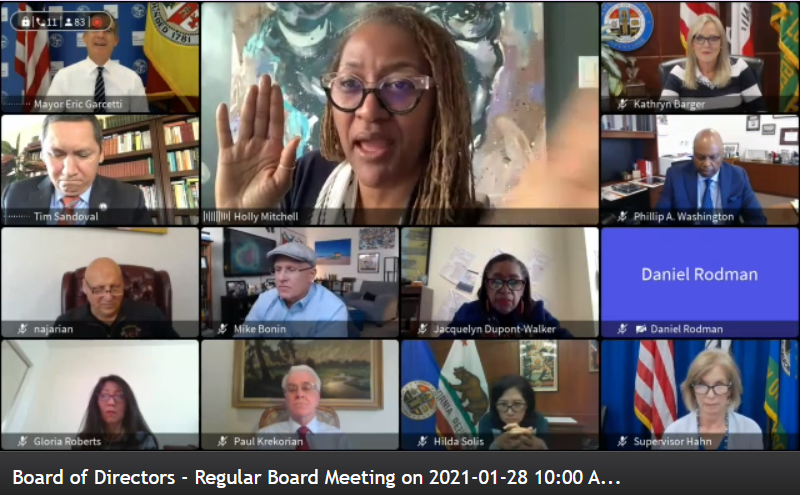 There will be another new boardmember when a new Gateway Cities representative is confirmed. That person will replace Long Beach Mayor Robert Garcia, who chose not to seek re-appointment.

No News Is Bad News For Crenshaw/LAX Line Construction

While work on the line is progressing, Metro still has no new official estimate for when it will open. Yesterday, Clarke reported that the firm building the line, Walsh Shea, is now projecting substantial completion in mid-May 2021, but Clarke expressed skepticism that Walsh Shea would be able to make that date. Following substantial completion, the contractor will turn the line over to Metro for roughly six months of testing and training before it opens to the public.

Clarke stated that Metro is doing an independent assessment of project completion, and he expects to bring a new estimated completion date to the board next month.

The way things are going, it appears unlikely that Crenshaw/LAX will open this calendar year.

The board approved an L.A. County Supervisor Kathryn Barger motion that sets terms for Metro to loan Caltrans money to complete I-5 North freeway widening construction through Burbank. This $1.3+ billion mega-project is currently five years behind schedule. In 2020, when Caltrans asked Metro to pay more for the project, CEO Phil Washington denied the request, stating, “Metro does not have financial responsibility for cost overruns.”

This year, as the contractor is looking at walking away (per Caltrans District 7 Director Tony Tavares’ statement yesterday), Metro proposed loaning $73.2 million to Caltrans for the I-5 North project. Metro staff proposed that Caltrans could pay Metro back using in-kind services. Yesterday, L.A. County Supervisor Janice Hahn criticized the Caltrans loan and vague in-kind payback as “fuzzy” and “wishy-washy;” in committee last week, Hahn called it “sketchy” and “a moving target.”

The Barger motion brings the final approval back to the board next month.

In January 2020, Metro brought on KeAndra Cylear Dodds as its Executive Officer for Equity and Race, charged with ensuring that work throughout Metro advances the agency’s adopted Equity Platform. As part of the mid-year budget adjustment approval, Cylear Dodds will be joined by three additional full-time employees to “improve efforts to expand access for historically and currently marginalized, underserved, and vulnerable communities, to contribute to a more inclusive and equitable L.A. County.”