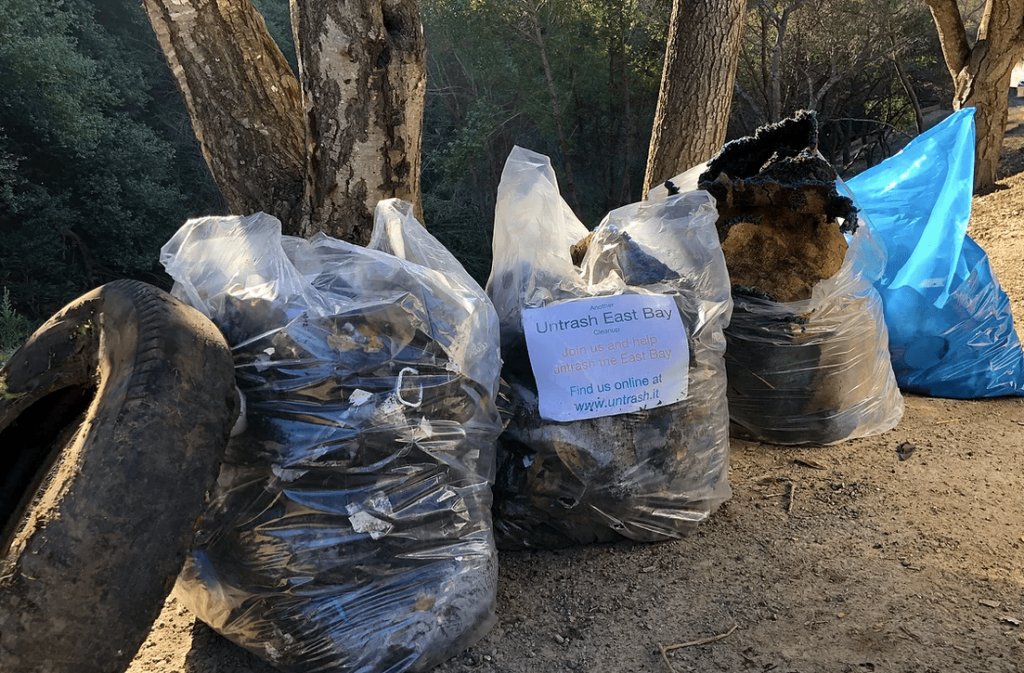 “You have to work the problem.” Stephan Orme is describing the task he’s taken on, of cleaning up trash in California, one neighborhood at a time. His maxim is broad and encompasses understanding how trash is connected to other urban, social, health, and institutional problems.

But it also really does mean “work,” as in “get out and do it.” If you see a problem, don’t complain about it; take care of it. Orme did that, starting early last year. He was bothered by the trash building up along Grizzly Peak Boulevard, a road that traces the ridge above Berkeley between parks and houses, between urban and wild land. With a few well-known spots for gathering, Grizzly Peak attracts a wide variety of people to enjoy its stunning views, to hang out and party, and also to dump trash.

Throughout the first eight months of 2020, Orme’s budding organization, Untrash.it, removed 450 bags of trash along a three-and-a-half mile section of Grizzly Peak.

But that was just the beginning. Untrash volunteers conducted very visible cleanups on Sunday afternoons, when the road and its turnouts see lots of people coming through. They also made a point of talking to people about what they were doing. They put up signs with positive messages (“You Deserve Clean, Beautiful Parks”) to encourage people not to dump trash. They installed trash cans and arranged to have them regularly emptied.

They succeeded in reducing new trash to a fraction of what it had been, said Orme. “The key to solving the problem of trash is to change social norms,” said Orme. “Research shows that if you take an area and make it clean, people litter less. It’s the governing social rule: you go along with what other people are doing. When you clean an area, you decrease the amount of littering, and if you combine on top of that visible volunteers out there cleaning, you set positive social norms.”

Inspired by their success, Orme and his group looked for new areas to clean up. They took on Aquatic Park, which surrounds a lagoon between Highway 80 and active railroad tracks.

Then they turned their attention to the large homeless encampment at the foot of University Avenue. This encampment has been the subject of a lot of complaining on NextDoor, in comments on stories in Berkeleyside, and on Facebook. Many of the complaints are about trash. The encampment sits on Caltrans land, between the looping onramps to Highway 80, and has grown over time as people have been pushed to the edge, lost housing, and needed a place to land.

Caltrans has cleaned up the site numerous times, but Orme said that has involved using a bobcat to remove large middens. “We cleaned the area,” said Orme.

Over the course of several Sunday afternoons, with volunteer work crews of between 30 and 35 people, they took away four forty-yard dumpsters full of garbage. “That’s about 125 to 160 cubic yards of trash per dumpster – at any rate, an enormous quantity of trash, about 900 bags,” he said.

“We went to the fences. Everything we could get, we got. We took trays and cut out the bottoms so we could screen plastic out of the sand. It was a level of thoroughness that had never been done in that area,” he said. They did not go inside any tents, but some of the encampment’s residents joined in the clean up, and they cleared away some abandoned campsites.

“It’s being cleaned in a way that’s different now,” said Orme. “We also distributed bags and gloves, and put up signs telling people when trash will be picked up – Caltrans is there once a month.” Untrash.it also hired a long-time camp resident, Thomas, to regularly dump a couple of trash cans and keep the area around a nearby dumpster clean.

“He started out offering to help, but we thought it was important to pay him,” said Orme. “It’s not much, but it covers a bit of taking care of other people’s trash.”

Orme, and Untrash.it, are not about to stop there. Orme is actively looking for investors to help him develop an app so anyone can recruit neighbors to help do similar clean ups anywhere. The idea, he says, is “to support people working individually together.” Individual litter-cleaning is not really scalable, but software could make it possible – and safer, given the need to keep a safe distance during the pandemic.

Orme is working on two concepts. The first is “Untrash Communities Individually Together,” initially a website, and eventually an app, to help people map and track areas they are cleaning up. It will notify neighbors about their efforts, to recruit more volunteers to do the same. That way “a bunch of people can come together and clean an area, each by taking a part of it,” said Orme.

The other concept is Untrash as a service, wherein people could sponsor an area, and “people who are trained, certified, and insured show up and clean it, and immediately get paid. It would be like an Uber for trash,” said Orme.

This acknowledges one of the lessons of litter clean up, which is that to clean some areas, you need specialized knowledge such as, for example, Caltrans protocols along highways, or knowing to avoid trampling vegetation or disturbing sensitive wildlife.

Potential sponsors “need to feel good about people coming onto the land to do that,” said Orme. “You need to know that the work will be good quality, that you’ll get your money’s worth, that it will be safe, and you’ll be covered.”

Ultimately, Orme sees the solution as mutualism, in which everyone works together. That means finding ways to overcome institutional barriers to doing so. For example, Caltrans needs to figure out how to partner with cities, and the other way around. “You need local people on the ground to respond as it happens,” said Orme.

Another thing to keep in mind: “The trash ending up on Caltrans land is coming from the local community. It’s our trash on their lands,” said Orme.

Which makes the conversation about who is responsible more complex – and the need for mutualism stronger.

Orme also identifies high tipping fees at dumps as a problem that needs to be addressed, because they encourage dumping on rural backroads and untended urban sites alike.

“And we have to eliminate non-compostable containers,” he said. “That just needs to be a rule, on a state or national level.”

For now, Orme and Untrash.it are continuing with small trials in urban environments. This will involve very public cleanups, with lots of volunteers wearing vests and actively cleaning up where people can see them. They’ve adopted the area of University Avenue and San Pablo in Berkeley, to start first by cleaning and then by keeping the area clean.

More information about Untrash.it can be found on its forthcoming website, here.

A thorough report on the work Untrash.it did at the University Avenue encampment is available here.