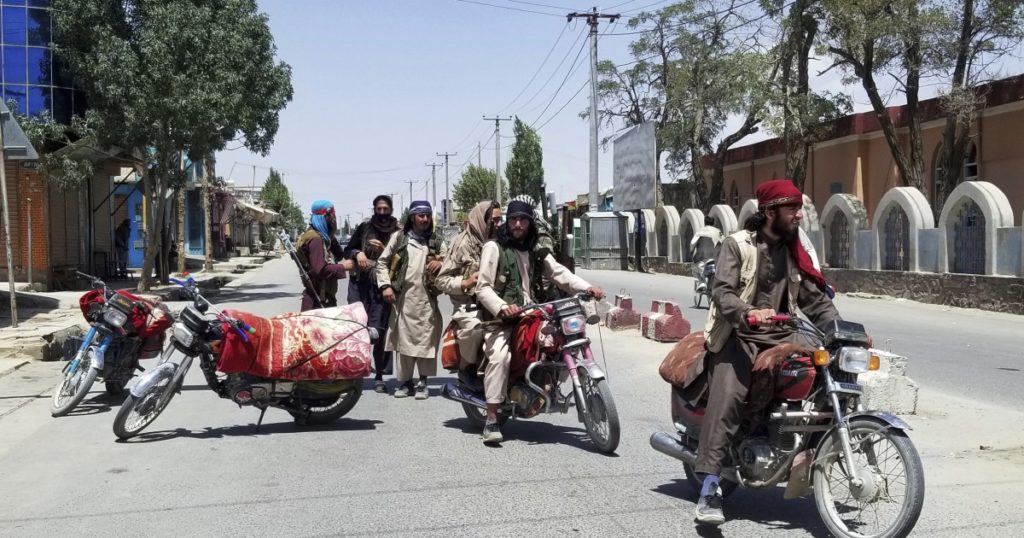 The Biden administration, struggling to contain the rapid collapse of much of Afghanistan to Taliban forces, on Thursday announced it was pulling many U.S. Embassy personnel out of Kabul and urged American citizens — for the second time in a week — to leave the country immediately.

Several thousand U.S. troops will be dispatched to the Kabul airport to help with what is shaping up as a military-run partial evacuation.

It was a significant escalation in a violently deteriorating situation. The urgent moves came as the Islamist Taliban conquered Afghanistan’s third-largest city and two additional provincial capitals in its quest to topple the U.S.-backed government; Afghan refugees flooded Kabul, many sleeping in the streets, and talks to reach a political solution were going nowhere.

State Department spokesman Ned Price said the administration has decided to reduce its “civilian footprint” in Afghanistan to a “core diplomatic presence” in face of the “grave” violence spreading across the country, and that many employees will be relocated to the fortified Kabul airport for safety.

The moves are also likely to dismay an already desperate Afghan population. Many say they fear imprisonment, torture, repression and execution at the hands of the Taliban, who ruled brutally in the 1990s. The group says it has modernized, but there is little evidence to support that. U.S. officials and human rights groups say they are already receiving numerous reports of atrocities by Taliban forces, including executions of surrendering soldiers.

“The embassy remains open,” Price said — though he would not say if that meant in its current location. “We will complete our priority work.”

Already, the State Department had reduced the number of its “nonessential” personnel in Kabul, once site of one of the largest U.S. diplomatic missions in the world, and is constantly reviewing broader evacuation plans, officials said.

U.S. officials hope to reduce the number of U.S. citizens in Afghanistan to avoid the need to mount large rescue operations if Kabul falls, which some analysts now believe could happen within weeks as the United States winds down its longest war and withdraws nearly all military forces. It especially does not want a Saigon-reminiscent, last-minute rescue of Americans at the embassy if Taliban forces march into the capital.

The administration will also speed up the processing of special visas for Afghan translators and others who worked for U.S. military and diplomatic missions, part of a program Washington created to attempt to provide a haven for the former employees. But the process has moved slowly and many Afghans say they cannot even reach Kabul nor cross Taliban-controlled borders to avail themselves of the visas.

Senior national security officials launched a round of urgent consultations in the last 24 hours with Afghan President Ashraf Ghani but have announced no other new plans. The Biden administration insists it will not change course in its withdrawal of U.S. military forces by Sept. 1, and has placed the responsibility for security squarely on the shoulders of the weak Afghan government and its army.

Pentagon spokesman John Kirby said Thursday that the removal of American officials from the Kabul embassy and from the airport will likely include airlifts. Three infantry battalions, approximately 3,000 soldiers, will join 650 U.S. service members already deployed in Kabul, Kirby said.

“This is a temporary mission,” Kirby said, to ensure a “safe and orderly” removal of people.

In Afghanistan, some Taliban forces have pierced the critical city of Kandahar, the country’s second largest, and are carrying out guerrilla attacks, according to news reports from the region on Thursday. The Taliban has already captured Herat, Afghanistan’s third largest city, the reports said, and has taken 11 of the country’s 34 provinces.

“Herat, the largest and most strategic province in the western part of the country, was also conquered,” Taliban spokesman Zabihullah Mujahid boasted on Twitter. “The provincial building, police headquarters and many other facilities came under the control of Mujahidin. The soldiers laid down their weapons and joined the Mujahideen. The surrender of the troops is ongoing.” The Taliban often refers to itself as mujahedeen.

U.S. officials say they remain prepared to assist Afghan security forces with any tool except ground troops. But at the same time, they are openly blaming a lack of united leadership in the Afghan government and the erosion in fighting forces from years of corruption for the dramatic failures that have allowed the Taliban to advance.

“There are other tools at our disposal that fall short of reintroducing U.S. forces,” Price, of the State Department, said earlier. “We have not ruled any of those out, and so if it’s appropriate for us to use them, we won’t hesitate to do so.”

He acknowledged the stunning speed of the Taliban’s movements and the terrible levels of violence. He added: “But at the same time, this is not a foregone conclusion, as many people seem to think, that this will be an inexorable march forward for the Taliban or any other force.”

The administration repeatedly asserts that the Afghan security forces enjoy numerical superiority over the Taliban because it fields 300,000 members, while the enemy only has 100,000. But former diplomats who worked extensively in Afghanistan said the numbers are disingenuous. The 300,000 is diminished by tens of thousands of “ghost soldiers” who don’t exist but are used to pad payrolls and by thousands of members who aren’t actually fighters, they said. All taken, the government army numbers are probably closer to those of the Taliban, experts say.

On the diplomatic front, the Biden administration regularly points to talks that have been taking place for months in Doha, Qatar, between representatives of the Afghan government and the Taliban. Special envoy Zalmay Khalilzad was dispatched urgently this week to the talks, but thus far the Taliban has shown little interest in declaring peace with the Ghani government.

“There is no realistic possibility that the Taliban will engage in dealmaking until they have achieved more on the battleground — either as far as they can go or need to go to dominate the negotiating table,” said Laurel Miller, a former acting special representative for Afghanistan now at the International Crisis Group.