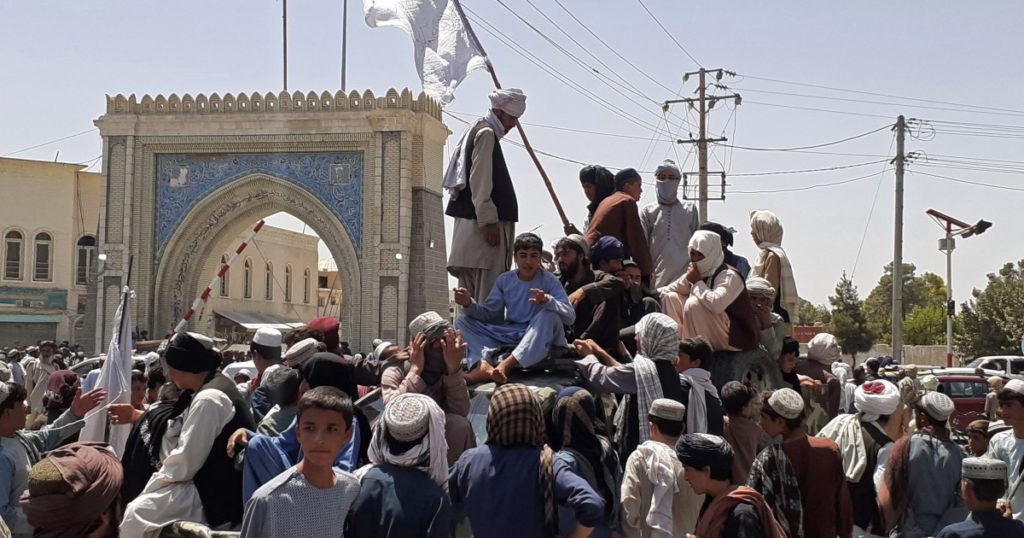 As the Afghan capital, Kabul, teetered in the face of a relentless onslaught by Taliban forces, the first contingents of U.S. Marines tasked with rescuing Americans and others were set to arrive in Afghanistan over the weekend, administration officials said Friday.

The urgency of the new mission was underlined by fierce Taliban advances that have startled the world as diplomats face rising regional instability and a widening humanitarian crisis. By Friday, the Taliban, who are seizing U.S.-funded military equipment as they roll seemingly unchallenged across the landscape, had captured Afghanistan’s second- and third-largest cities and most national territory.

The arrival of 3,000 troops will more than double the number of U.S. forces in the battered country after the long -promised withdrawal to end America’s longest war had proceeded apace and was scheduled to conclude by September.

Analysts said it was possible the Taliban will wait to attack Kabul — in part because of the U.S. presence and also because the Islamic extremists can probably lay siege to, isolate and starve the city by cutting off most of its land exit routes. Unlike other Afghan cities, Kabul also has an enormous population of some 6 million people, swollen in recent days by those fleeing other parts of the country.

“We have noted with great concern the speed with which they have been moving and the lack of resistance they have faced,” Pentagon spokesman John Kirby said Friday. He said that Kabul was not in an “imminent threat environment” but that the Taliban is “clearly” trying to isolate it.

Pentagon and State Department officials continue to insist the U.S. Embassy is not shutting down completely, despite the fact most employees are likely to depart, leaving only a skeleton staff. Employees are reportedly being ordered to begin destroying sensitive embassy files, and there are plans, still not finalized, to move the entire embassy operation into Kabul’s fortified Hamid Karzai International Airport.

The alarming events in Afghanistan had echo in the United States’ 15-plus years of war in Iraq. In both cases, civilian and military commanders arguably lost sight of their missions’ original strategic goals and overstayed their effectiveness. In the case of Iraq, U.S. troops had to return three years after their withdrawal to fight a new enemy, Islamic State, while in Afghanistan the last soldier had yet to leave before the threat came roaring back.

The Taliban’s swift victories over the last week indicate that, like in Iraq, U.S. training and plans for civil freedoms and democracy are often trumped by corruption, tribal instincts at self preservation, and the outright fear Islamists militants can incite with stonings, beheadings and other cruelties.

On Friday, the Taliban snatched Logar, a small provincial capital some 30 miles outside Kabul, the seat of power for Afghan President Ashraf Ghani and his government.

It was a small but significant victory in an advance that has brought more than half of Afghanistan’s provincial capitals under Taliban control; that includes Kandahar, its second-largest city and the militant group’s birthplace.

In Kabul, panic appears to have set in, with reports that high-level officials such as Vice President Amrullah Saleh have fled the country amid rumors that Ghani will resign.

“From the second half of the Trump administration to now, we have been encouraging Taliban morale and discouraging the morale of the Afghan government,” Earl Anthony Wayne, former U.S. ambassador to Afghanistan, said in explaining the speed with which the Taliban advanced.

The Taliban were buttressed when President Trump’s envoys agreed last year to sit down in Doha, Qatar, with their representatives, the first time a U.S. government had done so. But it cut out the Afghan government, which felt marginalized. That was underscored when one of the U.S.-Taliban agreements forced the Afghan government to release some 5,000 Taliban prisoners — many of whom are fighting today.

Except for geography, the resurgence of the Taliban and the rise of Islamic State read as if the same disturbing story of U.S. intervention. At its inception, the Islamic State resembled the Taliban of late. Racing through the rugged Mideast terrain in August 2014 atop weathered Toyota pickups, the Islamic militants scythed through one city, then another, and another still. Whole army units — all paid for and trained by the U.S. — disintegrated.

Islamic State blitzed through wide swaths of Syria and Iraq, commandeering a full third of each country for what it claimed was its caliphate. And the United States, three years after its last soldier had withdrawn from Baghdad, returned to a war it thought it had left behind.

In Afghanistan, the question is if it will have the chance to leave in the first place. The Taliban, the Islamist Afghan group that the U.S. came to defeat after the Sept. 11, 2001, terrorist attacks, has arguably never been stronger.

Its resurgence, much like that of Islamic State in 2014, has seen it take over — with astonishing ease — areas it could never hope to breach in the past. The Taliban now has its knife to the government’s neck.

As in Afghanistan, it was war weariness that had pushed then-President Obama to withdraw from Iraq in 2011. In a ceremony to mark the departure of the last remaining U.S. troops in December of that year, although it wasn’t “perfect,” Obama said, “we’re leaving behind a sovereign, stable and self-reliant Iraq, with a representative government that was elected by its people.”

But by mid-2014, with Islamic State scooping up millions of dollars of materiel — Abrams tanks, Bradley fighting vehicles, self-propelled howitzers, some 2,300 Humvees — and turning its sights to Baghdad, Obama had to justify the use of military power once more in Iraq to lead an international coalition against the militants. That campaign — although winding down — continues to this day.

In Afghanistan, the collapse of the Afghan National Defense and Security Forces (ANDSF), which the U.S. supported to the tune of a trillion dollars over two decades, has been far more jarring than the experience with their Iraqi counterparts in 2014, for whom it took three years to gather force.

In just a little over a week, an Afghan government force with 300,000 soldiers on the books has ceded territory to an adversary less than a third of its size. Government soldiers have surrendered en masse, bequeathing the militants thousands of trucks, dozens of armored vehicles, antiaircraft guns, artillery and mortars, seven helicopters (seven others were destroyed) and a number of ScanEagle drones.

The approach toward Kabul triggered Biden’s decision Thursday to dispatch the 3,000 soldiers and Marines. In addition to helping evacuate parts of the embassy, the troops will speed up the transport out of Afghanistan of interpreters who worked with American military and diplomatic missions and would risk death under the Taliban because of their U.S. affiliation.

Urgency distinguished the Afghanistan scenario today from Iraq in the 2010s.

“Panic withstanding, Islamic State did not threaten the capital” of Baghdad, said Ryan Crocker, a former ambassador to both countries. “It was pretty clear that IS would be at its full extension by Fallujah,” 40 miles west of Baghdad.

A tactic both governments resorted to as they faced Islamic forces was to call on local militias to join in their defense. There were very different consequences. In Iraq, those militias were backed by Iran, lived on to fight another day, and now menace U.S. forces still there. In Afghanistan, Ghani put out the call, and few local militias responded or were able to muster a defense.

Kirby from the Pentagon refused to describe the new push as a combat mission. “We’re all mindful of the perilous situation in Afghanistan and the deteriorating security situation,” Kirby said. The troops will be fully equipped, armed and have to right to attack in broadly defined self-defense, he said.

“If we need to adjust, either way, left or right, we’ll do that,” he added.

But veteran diplomats and region-watchers warn of how perilous deeper involvement can be.

“We cannot let ourselves get trapped as the defenders of the capital and saviors of millions of Afghans,” Crocker said. “We’d be risking a Beirut-style situation.” He was referring to a deployment into Lebanon of U.S. Marines that stayed beyond its original mission and was attacked by suicide bombers. In the 1983 attack, 241 Marines were killed.

Other observers thought U.S. forces could avoid getting sucked into an unending Afghanistan morass.

“I don’t see a world in which we go back to Afghanistan,” said a retired U.S. military officer who fought in both countries. He asked for anonymity because he continues to work on policy issues with government agencies.

“Iraq matters in a way that Afghanistan just doesn’t. We went back to Iraq because Iraq borders all these countries we care about” — Saudi Arabia, Kuwait, Jordan, Turkey — “and I don’t think we care very much about Pakistan or Iran, at least in a positive sense.”

Wilkinson reported from Washington and Bulos from Beirut.