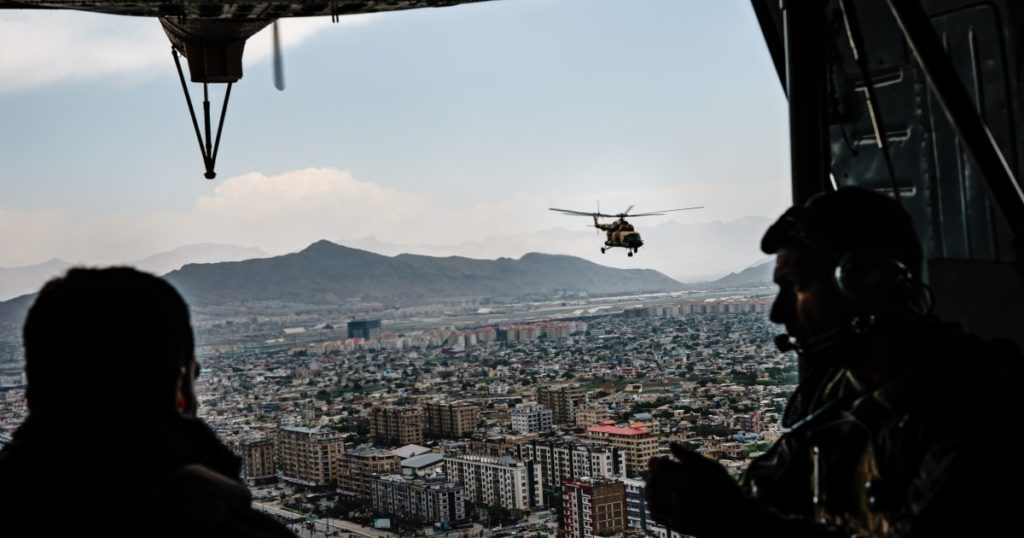 In a hidden corner of Hamid Karzai International Airport, half a dozen military officers sat at their desks, staring glassily at monitors showing high-resolution video feeds and surveillance footage beamed from drones, warplanes and helicopters across the country.

It was a tableau often seen in years past, but on this recent afternoon there was a crucial difference: The Afghans were alone, without the American forces that have backed them in a 20-year war.

That absence, amid a shift that puts Al Qaeda — rather than the Taliban — in the U.S. and NATO’s crosshairs, has forced an evolution in how Afghan forces operate. After years focused on roving combat with the Taliban on the battlefield, the Afghan military now must take full charge of the air support it relied on the U.S. to provide, integrating surveillance and airpower into its own Operations Intelligence Center.

“We created this capacity to defend our soldiers and bases moving from one area to another. We put all the elements, all the players together to do this concept: ‘Find, fix, finish,’” said Gen. Yasin Zia, the Afghan army’s chief of staff and acting defense minister, using the American terminology as he spoke of locating militant groups and Al Qaeda operatives in Afghanistan’s vast deserts and mountain ranges.

But the future of that counter-terrorism effort is in flux.

For the first time in two decades, the United States says it will have no troops and contractors in Afghanistan, and the CIA and special forces teams that have led the search for Al Qaeda’s remaining operatives will no longer work from bases in the eastern part of the country.

In recent days, the Pentagon began a “retrograde” of its forces in the country, which include what it says are some 2,500 service members, a few hundred special operations troops and some 18,000 contractors. NATO is conducting its own drawdown. The withdrawal could be complete as early as July. President Biden placed a Sept. 11 deadline for the pullout, 20 years after the Al Qaeda terrorist attacks in the U.S.

Biden administration officials say that the threat from Al Qaeda has been sharply reduced since the U.S. invasion in 2001 and that it will be possible to keep tabs on the militant groups in Afghanistan from outside the country. Even before Al Qaeda leader Osama bin Laden’s killing in 2011 in Pakistan, the group’s ranks were decimated and much of its leadership killed or captured.

If a threat of a terrorist attack on the United States or its interests is detected, the Biden administration officials insist, the Pentagon or CIA could strike inside landlocked Afghanistan — with air attacks from faraway bases or special forces teams inserted on so-called “capture or kill missions.”

“We will maintain an over-the-horizon capability to suppress future threats to the homeland,” Biden said Wednesday in an address to Congress. He added that Afghanistan is no longer the only location from which militants threaten the U.S and its allies, naming Yemen, Syria, Somalia and “other places.”

Fighter planes flying from aircraft carriers and longer-range bombers from air bases in the Persian Gulf, Indian Ocean and even the United States could strike insurgent fighters whose locations are fixed by surveillance drones, communications intercepts and informant networks.

But many uncertainties remain about that strategy, including whether any of Afghanistan’s neighbors will agree to let the U.S. base forces or surveillance drones on their territory. If not, the U.S. will have to rely on forces operating from American bases in the Persian Gulf.

The Pentagon and CIA may be forced back to a position similar to the one they had before the 2001 U.S. invasion of Afghanistan, when they relied on networks of local informants, satellite reconnaissance and intercepted communications to keep tabs on Al Qaeda and other militants in the country.

In those years, a small team of CIA officers working out of an office near the agency’s headquarters in Virginia were focused on tracking Bin Laden’s location in Afghanistan. But they failed, despite broad warnings about Al Qaeda’s desire to attack the U.S. homeland, to uncover his plans to attack on Sept. 11.

The agency also prepared detailed plans multiple times for killing or capturing him before 2001, according to a 2004 report by the 9/11 Commission. But officials either halted the operations or saw them vetoed by the White House over concerns about civilian casualties, inaccurate intelligence or diplomatic fallout from a unilateral U.S. attack in Afghanistan.

Many of the same problems could hamper U.S. efforts decades later.

The U.S. exit also means the shuttering of CIA-backed paramilitary groups responsible for “capture and kill” operations the U.S. has relied on to bag high-value Al Qaeda and Islamic State targets. (Human rights groups contend the paramilitary groups have committed abuses against civilians.)

But the Al Qaeda of 2021 is a far smaller organization with less reach, while the United States has built a counter-terrorism capability and familiarity with Afghanistan far exceeding anything it had before 2001.

“There will be some degradation in terms of our ability to know exactly what’s going on,” Zalmay Khalilzad, the administration’s negotiator on Afghanistan, told the Senate Foreign Relations Committee on Tuesday. “But we believe, given the nature of the threat right now… that we would get adequate warning.”

Al Qaeda has fewer than 200 members in south Asia, most of them in Afghanistan, Lt. Gen. Scott Berrier, the head of the Defense Intelligence Agency, said Thursday. The group’s second-ranking leader, Ayman Zawahiri, though suffering severe health problems, is still believed to be alive, hiding possibly in Afghanistan, while other leaders are said to be in Iran, according to the agency.

“There was little discernible activity out of the group” last year and “throughout 2021, [Al Qaeda] very likely will be unable to conduct terrorist attacks,” Berrier added, in written testimony to the Senate Armed Services Committee. Instead, the group will “bolster its relationship with the Taliban.”

That relationship is the core U.S. concern.

Under the terms of a 2020 withdrawal agreement with the Trump administration, the Taliban vowed to prevent Afghan territory under its control from being used by terrorist groups to launch attacks on the U.S. and its allies. U.S. officials insist that the deal requires the Taliban to sever its ties with Al Qaeda, but U.S. intelligence officials do not expect that to occur. What happens to that deal after Biden delayed Trump’s May 1 withdrawal date is unclear.

Despite publicly distancing themselves from Al Qaeda in private talks with U.S. officials, the Taliban “very likely maintains close ties with the militants at the local level, often through family ties due to years of intermarriage” in Afghanistan and Pakistan, said a senior U.S. official familiar with intelligence assessments about the relationship.

A statement posted on the “Voice of Jihad” Taliban website in October said the group had no obligation to sever ties with Al Qaeda under the U.S.-Taliban deal, the official noted.

Taliban representatives, however, insist they can contain any extremists on Afghan soil.

“Al Qaeda was in Afghanistan before Taliban. All those countries now complaining about them supported them at the time of the Soviet invasion, and we now inherited them,” said Suhail Shaheen, a Taliban representative in Qatar, in a phone interview on Thursday.

“We are committed to not allowing any entity or individual to use Afghanistan against the U.S., its allies or any other country. We have this capacity to deal with all of our security issues.”

Some Afghan officials, meanwhile, see an opportunity in the Taliban’s integration into the Afghan state. That remains an unlikely prospect in the face of the Taliban’s dismissal of the government as an American puppet regime even as it views its leaders as traitors to the country. Still, if there were to be peace it would deny extremist groups the local protection they have so far enjoyed.

“If the Red Force and Afghan special forces operate together, Al Qaeda and Islamic State will be nothing,” said one former official with the country’s National Directorate of Security, its intelligence service, who refused to be named because he was not allowed to speak to the media. The Red Force is the name of the Taliban’s special units.

But U.S. officials say that unless the Afghan government and the Taliban reach a power-sharing deal, Al Qaeda is likely to reconstitute its ability to threaten U.S. targets outside Afghanistan in two to three years, according to the senior U.S official, citing classified intelligence assessments.

That timetable could give the Biden administration time to build up U.S. capabilities in the region, officials said.

The White House is promising to continue aid critical to the Afghan military’s survival, and the Pentagon is making plans to continue to share intelligence and to train Afghan forces as long as the government in Kabul survives.

Biden has been clear that troops and contractors will leave Afghanistan, except for a small contingent to guard a scaled-down U.S. Embassy. If the U.S.-Taliban withdrawal agreement is violated by both sides, nothing would prevent the White House from sending back covert CIA personnel in case the threat from Al Qaeda reemerged, some officials note.

But Pentagon and intelligence officials are also worried that Afghan government forces could quickly face military reverses without help from U.S. troops and thousands of contractors. Afghans will no longer have U.S. assistance on airstrikes, aircraft maintenance and supplying ground troops around the country.

“Some things the Afghans are going to have to do when we leave if they expect to survive,” said Gen. Kenneth F. McKenzie Jr., the top commander in the region, in remarks to the American Enterprise Institute Tuesday. “We’ll see if they’re able to do that. I don’t want to make it sound easier than it is.”

If the Afghan military can prevent a Taliban takeover, it could help contain the risk of a resurgence by Al Qaeda and Islamic State, which also has a small presence.

It could enable Afghan commandos, who have provided much of the human intelligence on insurgent threats, to continue to funnel reports to U.S. analysts outside the country. It could also enable the Afghan government to bring in its own contractors, using aid dollars from the U.S., to replace those now departing.

Back in the operations center, Gen. Zia said the distance will have little effect on information-gathering on the ground, even though Afghan officials have acknowledged that the withdrawal will reduce their capacity for forensic and signal analysis.

“But operationalizing that intelligence to these rooms will be a challenge,” he said, gesturing to one of the monitors in the center.

Last month, the National Directorate of Security, the country’s domestic intelligence and paramilitary agency, announced it had killed Dawlat Beg, an Indian member of Al Qaeda and Hazrat Ali, a Taliban terrorist group, in Paktika province, near the border with Pakistan.

“That’s not my fight; it’s that of the international community,” said Zia. “If they need help, they need to sit and find a way. And they are doing so.”