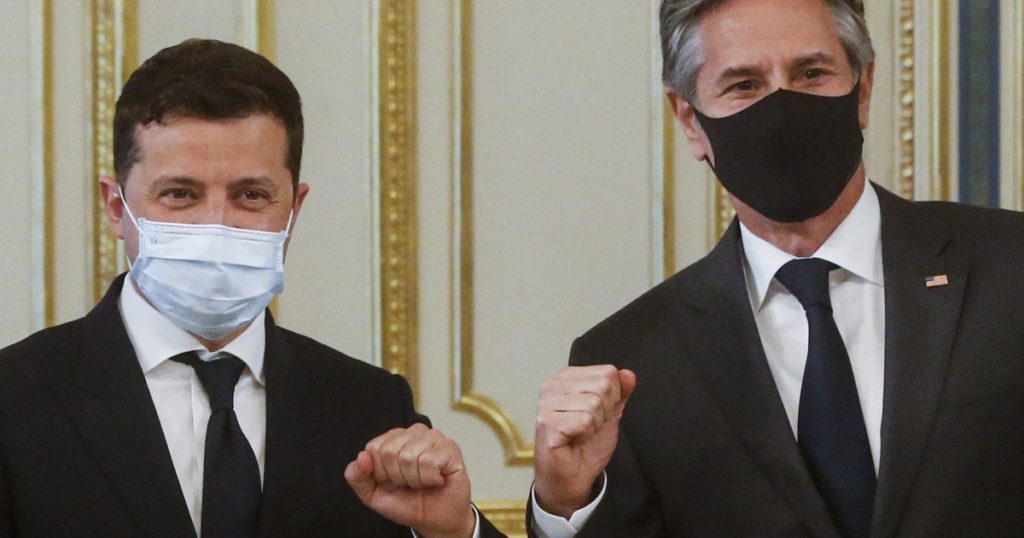 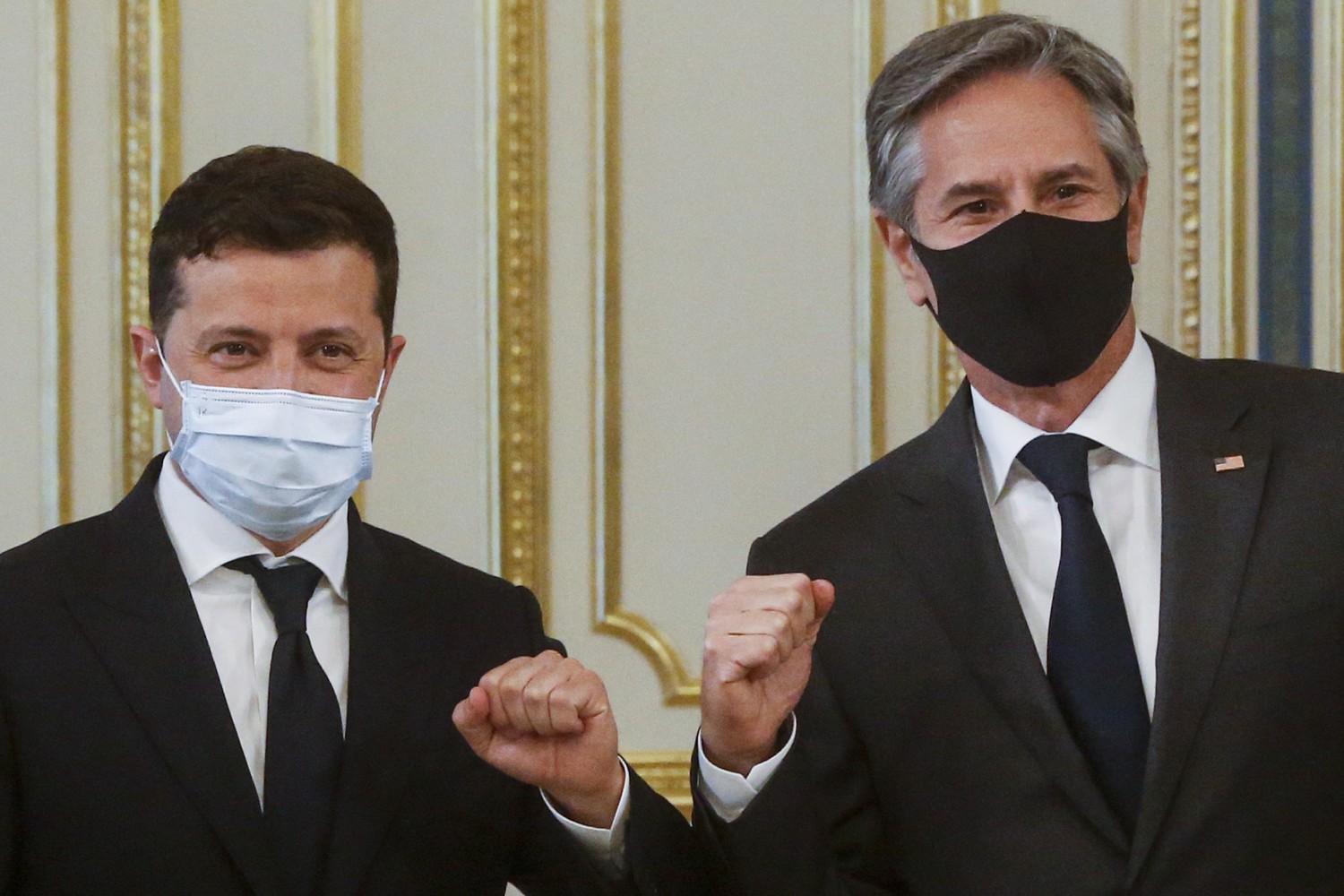 Sending a tough diplomatic warning to Russia — backed by a show of military force — the Biden administration on Thursday vowed to stand by Ukraine and its beleaguered government in its struggle with “destabilizing actions” from Moscow.

Secretary of State Antony Blinken, on a swing through the Ukrainian capital of Kyiv, said the administration was considering more defense aid for the former Soviet republic as threats from Russia persisted.

“We look to Russia to cease reckless and aggressive actions,” Blinken said during a joint press appearance with Ukrainian President Volodymyr Zelensky.

Russia last month deployed an estimated 100,000 troops along its border with Ukraine and in Crimea, the Ukrainian peninsula that Moscow invaded and annexed in 2014. President Vladimir Putin then announced a withdrawal, but both Blinken and Zelensky said Thursday “significant” numbers of Russian troops and weaponry remain amassed in the area. “Russia has the capacity on fairly short notice to take aggressive action if it so chooses,” Blinken said.

The Pentagon estimates there are still 70,000 to 80,000 Russian troops near the border with Ukraine, the most Moscow has put there since it invaded and annexed the Crimean peninsula in 2004, according to a senior U.S. official familiar with intelligence estimates. More than 14,000 people have been killed in fighting with Russian-backed separatists.

Blinken arrived in Kyiv during massive NATO military exercises throughout Eastern Europe involving 28,000 troops from the U.S. and other countries. It includes maneuvers and live fire training in multiple countries, including airborne operations in Romania and Bulgaria.

Together, the actions on the diplomatic and military fronts were intended to send an explicit message to Putin that the new U.S. government would punish alleged behavior alleged that has included devastating cyber attacks and election interference in the U.S.; the poisoning of political dissidents; and military aggression in neighboring countries. The positioning of the NATO forces for the drills is meant to signal to Moscow that the Pentagon could move swiftly to insert forces near the Black Sea if a crisis occurred.

Blinken made a point of noting that his trip to Kyiv was one of only a small handful of in-person meetings he has had with foreign leaders, choosing Ukraine and Zelensky before Russia. However, a long list of economic sanctions against Russian officials and businesses has failed to deter Putin.

Ukraine is often seen as being on the frontlines against Russian aggression, with the defense of its sovereignty a key test for the U.S. and western Europe. But Ukraine also played a starring role in U.S. election intrigue when in 2019 then-President Trump telephoned Zelensky and threatened to withhold military aid unless he helped dig up dirt on Trump’s political rivals — and especially Joe Biden, whose son Hunter had a controversial, high-paying consultancy job with Ukraine’s state energy company.

Zelensky, a comedian-turned-politician who once played a hapless president on a popular sitcom, found himself in the truly hapless position of wondering why this was happening to him. In the end, a Republican-dominated Senate acquitted Trump, but the damage done to the reputation of American diplomacy was, in the opinion of many, irreparable. Relations with Kyiv were in tatters, another of the repair jobs that Blinken is confronting now.

On Thursday, after meeting with Blinken, Zelensky said he had invited President Biden and Vice President Kamala Harris to visit Ukraine this year, its 30th anniversary of independence. Blinken said Biden would visit when the “time was right.”

Zelensky also expressed gratitude for U.S. help and defended his record on “good governance” anti-corruption reforms, which have also been at the forefront of Biden administration demands for Ukraine. But Zelensky is also pressing for NATO and European Union membership for his country, and no progress was reported in those areas.

“Ukraine needs a clear signal about the European and Euro-Atlantic prospect,” he tweeted earlier in the week. “Postponing these issues for ‘later,’ ‘some day,’ ‘(in) 10 years’ has to end.”

In fact, there is little momentum behind the idea among NATO members in Europe, who fear it could spark a military crisis with Moscow. Kyiv would like Washington to supply it with more military aid, but some experts said what would help Ukraine more would be a unified political strategy with European allies aimed at raising the international pressure on Moscow to stand down

Meanwhile, rampant corruption in Ukrainian governments, before and including Zelensky’s, remain an obstacle to the country’s acceptance in western alliances.

“Ukraine is facing two challenges: aggression from outside, coming from Russia, and in effect aggression from within, coming from corruption, oligarchs and others who are putting their interests ahead of those of the Ukrainian people,” Blinken said at the brief news conference.

The Russian military shifted some of its units away from Ukraine’s border after Moscow announced a withdrawal of its forces on April 22. But many of the units left equipment behind, enabling them to return on short notice.

“They’ve got all the things in place and they aren’t going to stop until they are stopped,” said Ben Hodges, a retired Army general who commanded U.S. forces in Europe.

While reaffirming its support for Ukraine, the Biden administration has yet to outline a strategy for working with European allies to exert adequate pressure on Moscow to cease funneling of supplies and fighters to separatists in Ukraine’s southeastern Donbass region or in the Black Sea.

The deployment has been accompanied by Russian navy exercises in the Sea of Azov, a tiny but economically important waterway connected to the Black Sea by a canal that Russia and Ukraine agreed in 2003 to share.

“They’re not interested in anybody else being able to do anything there,” Hodges said of the Sea of Azov. “Because we don’t have a strategy for the region, we don’t allocate resources to it.”

There was no immediate reaction from the Russian government to Blinken’s latest statements, but officials in Moscow have criticized the NATO war games for days. “We call on the [U.S.] military to stop aggressive rhetoric and actions, leading to destabilization, arms race and, as a result, less security in #Europe,” Russia said on Twitter.

Blinken described the Biden administration policy toward Russia in broad terms, of carrots and sticks but without the obeisance of Trump, in an interview with the BBC.

“If Russia acts recklessly or aggressively, then we will respond,” Blinken said. “But at the same time, we would prefer a more stable and predictable relationship, and if Russia chooses that path, there are areas where we can cooperate in our mutual interest. But it is really focused on Russia’s actions.”