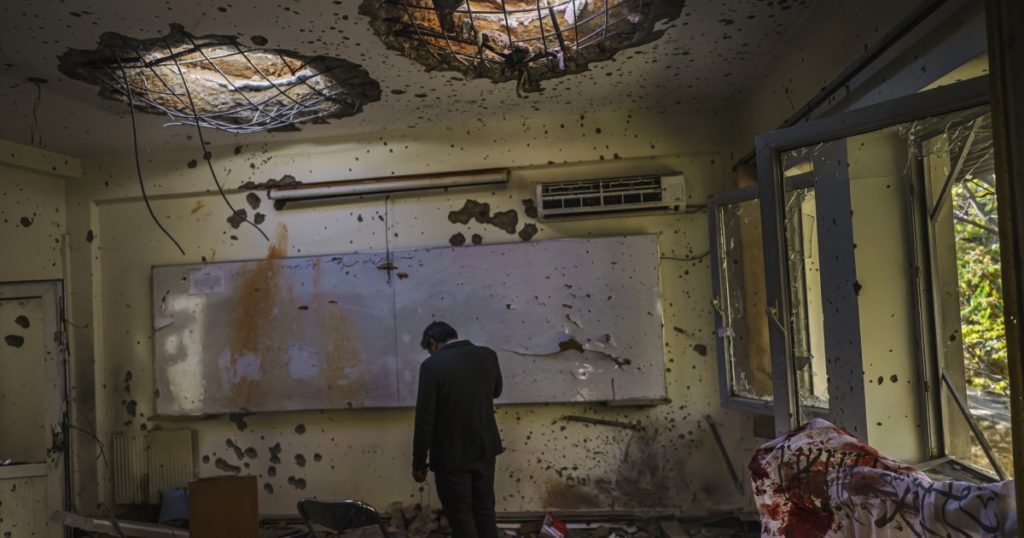 When Taliban insurgents attacked Sangsar village in late October, they were fighting for lost ground again within their reach.

Fighters besieged the mud-walled town, ringed by corn and cannabis fields. They gunned down six police officers who had run out of ammunition after three days of fighting.

“It was the first time in many years they were that strong,” said Raqya Aslam, a 30-year-old villager.

It was in Sangsar, 25 miles outside the southern city of Kandahar, that the Taliban movement was founded in 1994 by a one-eyed local cleric. A decade ago, Taliban fighters waged a hit-and-run insurgency against U.S. and Afghan troops on the town’s unpaved streets and winding paths.

The Americans are gone. So is the cleric, Mullah Omar, who died of natural causes in hiding in 2013. But the Taliban is back in force — and not just in Sangsar.

Nineteen years after the U.S. invaded Afghanistan to punish Osama bin Laden for the Sept. 11, 2001, terror attacks, the 4,500 remaining American troops are rushing to the exits as the insurgency they never managed to defeat is regaining ground across much of the country.

“Every day we make a plan for fighting,” Rafiullah Haqqani, 24, a Taliban commander from Sangsar who leads 20 fighters, said in an interview. “Every day we try to capture more area.”

Since the Trump administration and the Taliban signed a deal in February promising Americans’ complete withdrawal by next spring, the U.S. has halted almost all combat operations, freeing the insurgents to step up attacks against Afghan government troops.

U.S. warplanes still carry out emergency airstrikes when Taliban fighters threaten to overrun Afghan troops. But at the handful of remaining bases, the U.S. and its allies are packing up and leaving, along with the contractors who have been training Afghans and keeping its military supplied.

“We have been in a condition of strategic stalemate where the government of Afghanistan was never going to militarily defeat the Taliban,” Army Gen. Mark Milley, the chairman of the Joint Chiefs, said last week at a Washington think tank, “and the Taliban, as long as we were supporting the government of Afghanistan, is never going to militarily defeat the regime.”

But that support is shrinking.

At Kandahar Airfield, a U.S. installation once so vast it had its own TGI Fridays restaurant, flag football league and Tim Hortons doughnut shop, the U.S. footprint has shrunk to a few hundred service members. Romanian soldiers guard the perimeter but rarely venture far.

At Camp Scorpion, a sprawling encampment outside Kabul, the U.S. special forces who once used it as a staging area for operations around the country pulled out in September, leaving a stripped-down base to Afghan commandos.

Days later, the pickup trucks and other vehicles left behind at the facility for Afghans were already missing, apparently sold off or stolen, said a senior Afghan officer familiar with the incident, an example of the corruption that has severely impaired the country’s security forces.

President Trump accelerated the U.S. pullout last month, ordering a drawdown to 2,500 troops by next month when Biden takes office. U.S.-brokered peace talks between the government and the Taliban underway in Qatar since September have made little progress.

Taliban leaders have rebuffed calls from Afghan President Ashraf Ghani’s government for a ceasefire, seemingly convinced they can make gains on the battlefield without substantial concessions at the negotiating table.

Their resurgence is forcing the Afghan army and police to rush reinforcements from province to province.

But with ever-shrinking support from the U.S. — and no sign that President-elect Biden will reverse the American pullout — commanders say they are overstretched.

Since 2001, more than 2,400 U.S. military personnel have died in Afghanistan — including four so far in 2020 — and Congress has appropriated about $141 billion for reconstruction and for training and equipping Afghan security forces.

Even many Afghans who want the U.S. forces to stay acknowledge their own troops must fight better.

“The Americans made our lives very easy,” said a senior Afghan officer who dealt directly with U.S. commanders and spoke on the condition that he not be identified. “Now it’s our responsibility, and it’s very hard.”

In Wardak province, a 30-minute drive from Kabul, a half dozen police and army bases have fallen in recent months along the highway to the capital, some without a fight, says Sarda Wali, a 22-year-old police commander.

Sometimes Taliban commanders send text messages to government troops, advising them to flee before an impending attack, he said. Many soldiers comply, fearing the Taliban will surround them without food, water or ammunition.

“The soldiers from the other provinces. They usually surrender when the Taliban asks them to,” said Wali, a native of Wardak who sports a gold watch and a large pearl ring.

One nearby police outpost is surrounded by Taliban, but it hasn’t given up and has been resupplied by helicopters, he said.

Wali has been the commander since he joined up two years ago after the Taliban attacked his village, killing two of his uncles and a cousin. Inside the three-room hut that serves as his command post and living quarters, his Kalashnikov hangs on the wall near photographs of his father.

The outpost sits behind concrete blast walls overlooking the highway. A neighboring fort sits on adjacent rocky hilltop. The green valley below is in Taliban hands.

American airstrikes pushed the Taliban back, helping to keep the provincial capital, Maiden Shah, in government hands. But Wali’s men are barely hanging on.

Generators at the base are without fuel to power high-wattage flood lights, their best defense when insurgents, some equipped with night vision goggles, advance on their position in the dark, he said.

“It’s like we are blindfolded right now,” he said. They can see us, but we cannot see them.”

Many Afghans feel desperate or angry at their government, whose widespread corruption has siphoned off international aid intended to help curb the insurgency. Others feel bitter at American forces, who they fault for pulling out before the country is secure.

“The Americans promised us many things,” says Azim Khan, a police commander in Panjwai, a farming district 20 miles outside of Kandahar. “They never carried out a single promise they made to the Afghan people.”

Khan signed up with the U.S. military a decade ago, when the Obama administration sent 30,000 more troops to Afghanistan, hoping to turn around the losing war. A tribal elder, he was given money, uniforms and weapons to create a local militia, known as Afghan Local Police.

Hundreds of U.S. troops also moved in, taking over from Canadian forces who had been in the district since 2002. The Americans forces established three large bases along the two-lane highway down the center of the district and small outposts in nearby villages.

Facing overwhelming U.S. firepower, Taliban fighters planted mines along the highway and the footpaths where U.S. troops patrolled and snuck close enough at night to lob mortar shells inside the bases.

But American troops departed Panjwai six years ago, leaving it in the hands of the Afghan army and police, including Khan’s militia.

The future looks bleak. They are running short of ammunition and have lost 14 men in the past three months. The Afghan government recently informed Khan that they are disbanding his force for budget reasons, even as Taliban fighters launch attacks every night against police checkpoints and army outposts.

Khan said that he and his men have been offered jobs in the army. But Khan is reluctant, fearing they will be ordered to combat in another part of Afghanistan and that their homes and relatives in Panjwai will be left unprotected.

“We are obligated to go” to the army, “but we don’t want to,” Khan said, munching on ruby red pomegranates at the two-pump gas station along the highway to Kandahar that serves as his headquarters. “In all these villages there are still Taliban.”

The insurgents say their morale is high, with foreign troops finally withdrawing. “The Taliban defeated America,” said Haqqani, the Taliban commander from Sangsar. “It’s a victory for us.”

His fighters had just returned from clashes in neighboring Helmand Province, where they nearly captured Lashkar Gah, the provincial center, before being pushed back by Afghan troops. They had returned to their home province, determined to push closer to Kandahar.

Residents are still adjusting to the return of the Taliban to Sangsar. After capturing the town, the insurgents ordered residents inside their home and planted mines along the streets, said the villager Aslam.

When the Afghan army counterattacked with helicopters and ground troops, the Taliban hid their weapons in a nearby cornfield, posing as farmers until the soldiers left and the insurgents reclaimed the village, she said.

Aslam remembers when American troops patrolled their streets and irrigated fields from 2010 to 2016 as a time of comparative safety, though Taliban ambushes and buried mines killed and wounded dozens of U.S. soldiers.

“They came to our area and they did patrols,“ she recalls. “In our village, it was peaceful.”

Aslam fled with her husband, his second wife and the family’s 16 children after the three-day battle in October. They now squat in a filthy three-room shelter near Kandahar city, 25 miles to the west, their aluminum pots, bedrolls and other meager belongings piled in a courtyard open to the sky. Their pet bird chirped in its metal cage.

At Mirwais Hospital, the region’s largest, the staff was preparing for more casualties on a recent morning as the fighting continued in Panjwai and other districts surrounding Kandahar. Workers were setting up tents in the courtyard outside the surgery ward to house another 115 beds.

A soldier, 30-year-old Muhammad Sabiz, was recovering in the intensive care unit, a bandage around his stomach. He had been shot by two assailants on a motorbike two weeks earlier as he was returning to the army base outside the city where he was stationed.

“People are very much afraid,” he said, while several army comrades in camouflage fatigues and carrying rifles stood around his bed. “When they leave the base, they do not believe they will be alive.”

Yet exhausted troops fight on, as they have for years.

One recent afternoon in Panjwai, hours after returning from a battle, 21-year-old Agha Wali and four fellow police officers loaded into the back of a battered green pickup and headed for the front once again.

As they roared through villages, past shoulder-high cannabis stalks filling the air with a sweet fragrance, Wali remembered a somber melody.

“We’re going to war,” he sang as his wild-haired buddies in camouflage fatigues laughed and joined in, rifles in one hand, cigarettes in the other. “We are going to join the fight.”

At the frontline, Taliban fighters were 600 yards away, across a rocky, dry riverbed. They had taken a village on the far bank earlier that morning in a sudden thrust. A trickle of motorbikes and cars crammed with families and livestock were fleeing the village.

Nightfall was coming as the young soldier and his squad climbed down from the truck. More fighting was expected.