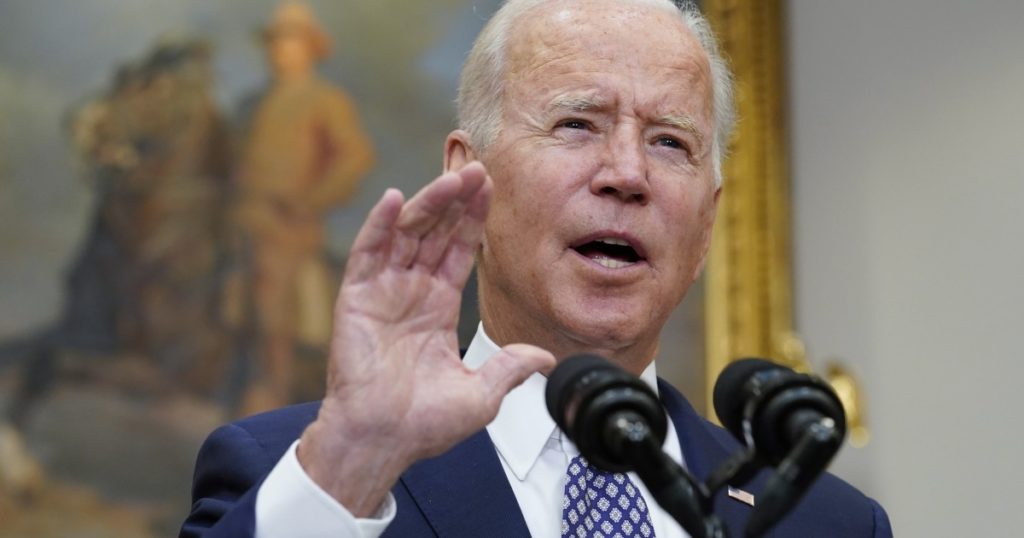 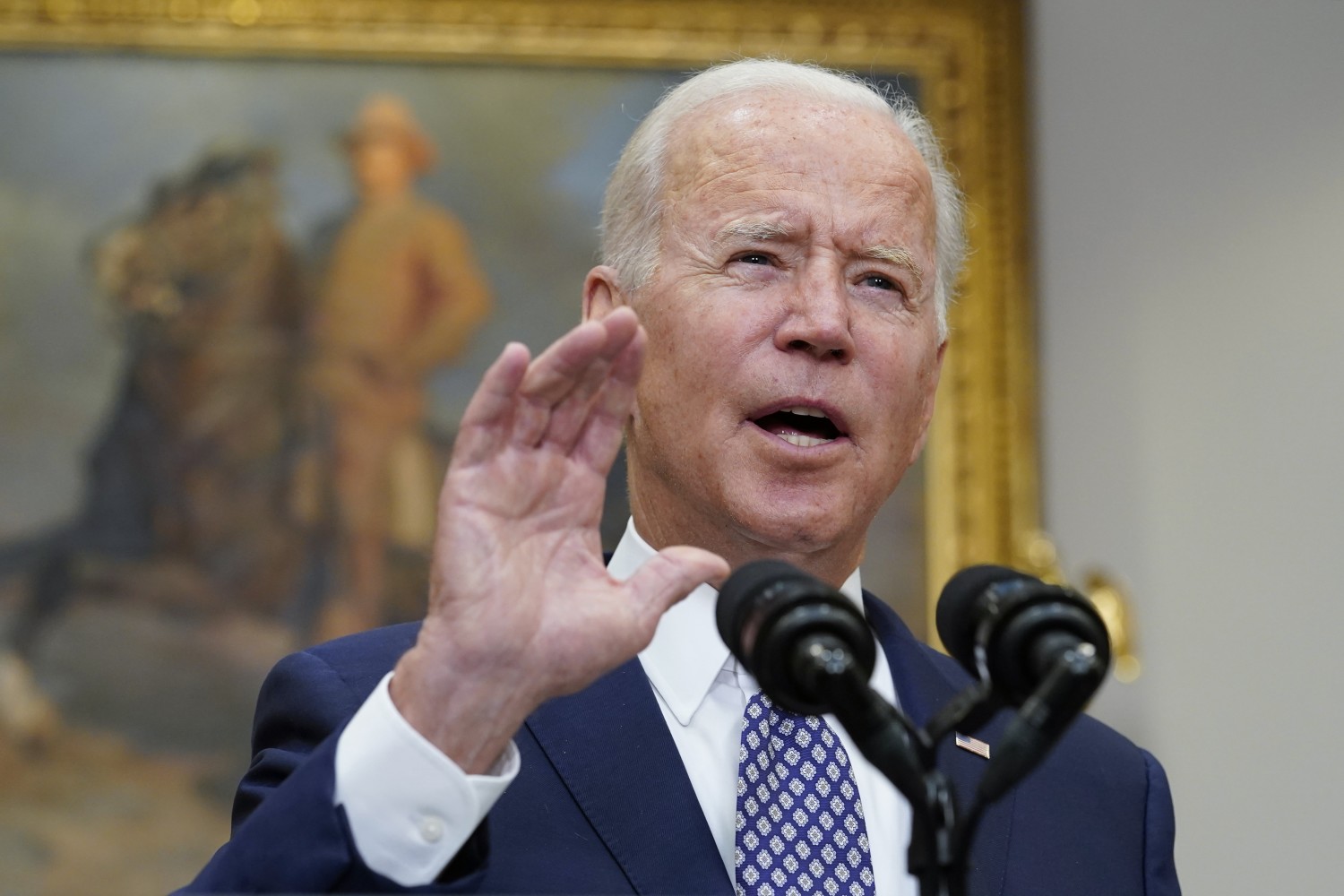 U.S. military service members were among the people killed in the terrorist bombing at Kabul’s airport on Thursday just days before President Biden’s deadline for a final withdrawal from Afghanistan.

More details, such as the specific number of casualties, were not immediately available. Marines have been providing security at the airport and helping to facilitate the evacuation of Americans and Afghan allies.

Biden spent the morning being briefed by national security officials, including commanders on the ground in the country.

No organization has yet claimed responsibility for two bombings, which occurred at an airport gate and in the vicinity of a nearby hotel that has been a staging ground for people awaiting evacuation. However, suspicions have focused on the Islamic State in Khorasan, also known as ISIS-K, a local affiliate of the Iraq- and Syria-based terrorist group.

Biden has not yet commented publicly. The casualties mark the first U.S. military deaths in about 18 months.

“We can confirm that a number of U.S. service members were killed in today’s complex attack at Kabul airport,” Pentagon spokesman John Kirby said in a statement. “A number of others are being treated for wounds. We also know that a number of Afghans fell victim to this heinous attack.”

The attack reshaped the White House schedule on Thursday. An Oval Office meeting with Israeli Prime Minister Naftali Bennett was delayed; a public health briefing on the COVID-19 pandemic was postponed; and a virtual conference with governors to talk about resettling Afghan refugees was canceled.

It’s unclear how the attack could alter Biden’s timeline for completely withdrawing troops from Afghanistan by Aug. 31. There are still an estimated 1,500 American citizens in the country, plus thousands of Afghan allies who would be at risk of Taliban reprisals if they remain behind.

Americans in Kabul have been buffeted by security warnings from the State Department. On Wednesday night, they were told to “leave immediately” from three airport gates. After the attack, another message said to “avoid traveling to the airport and avoid airport gates at this time.”

According to the White House, the U.S. has evacuated or facilitated the evacuation of nearly 100,000 people since Aug. 14, when the Taliban approached Kabul after rapidly capturing provincial capitals across the country.

On Aug. 20, Biden said his administration has “made clear to the Taliban” that any attack or disruption of evacuation operations would “be met with a swift and forceful response.”

However, it appears likely that the bombings were carried out not by the Taliban, but ISIS-K. The organization is hostile to both the U.S. and the Taliban, which it views as insufficiently extremist. The K stands for Khorasan, the name of an ancient province that encompassed parts of modern-day Afghanistan.

Biden has repeatedly warned about the threat of a possible attack by the Islamic State affiliate attack during the evacuation.

“Every day we’re on the ground is another day we know that ISIS-K is seeking to target the airport and attack both U.S. and allied forces and innocent civilians,” he said Tuesday.

The organization has been eager to embarrass the Taliban by revealing its inability to govern and maintain security. It previously claimed responsibility for bombing a girl’s school in Kabul, killing dozens of students.

ISIS-K is only one part of a complicated and volatile environment in Afghanistan. The Taliban never completely severed its ties with Al Qaeda, the terrorist group responsible for the Sept. 11 attacks two decades ago.

“To this day, the Taliban will not forswear it, will not break it, will not renounce it, will not do anything to even acknowledge it,” said Thomas Joscelyn, a terrorism expert at the conservative Foundation for the Defense of Democracies in Washington. “Yet many in the U.S. establishment are credulous when it comes to the Taliban counterterrorism assurances.”

On Capitol Hill, members of Congress acknowledged that a bombing was among their biggest fears with the chaotic withdrawal.

Republicans largely placed the blame on Biden’s handling on the evacuations, with some members calling for resignations even before the details of the attack were known. Democrats largely focused on the need to resume evacuations as quickly as possible.

“As we wait for more details to come in, one thing is clear: We can’t trust the Taliban with Americans’ security,” Senate Foreign Relations Committee Chairman Bob Menendez (D-N.J.) said in a statement. “This is a full-fledged humanitarian crisis, and the U.S. government personnel, already working under extreme circumstances, must secure the airport and complete the massive evacuation of Americans citizens and vulnerable Afghans desperately trying to leave the country.”

Texas Republican Rep. Tony Gonzales, a Navy cryptologist who served in both Iraq and Afghanistan, said on Twitter that Biden’s “shameful handling” of the withdrawal from Afghanistan “has now led to U.S. personnel being wounded in a terrorist attack” in Kabul.

“My biggest fear is these attacks today are just the beginning of what we will continue to see as the Administration fails to get Americans and our Afghan allies out and to safety,” Gonzales said. “We don’t need statements from the Administration right now — we need immediate resignations.”

Former President Trump’s administration sidelined the Afghan government last year and cut a deal with the Taliban to withdraw U.S. troops from the country by May 1. Biden shifted the deadline to Sept. 11 — revising the target to Aug. 31 over the summer — but has been adamant about ending the U.S. military presence there.

Biden said earlier this week that he was asking the Pentagon and State Department for contingency plans if more time was needed to complete evacuations.