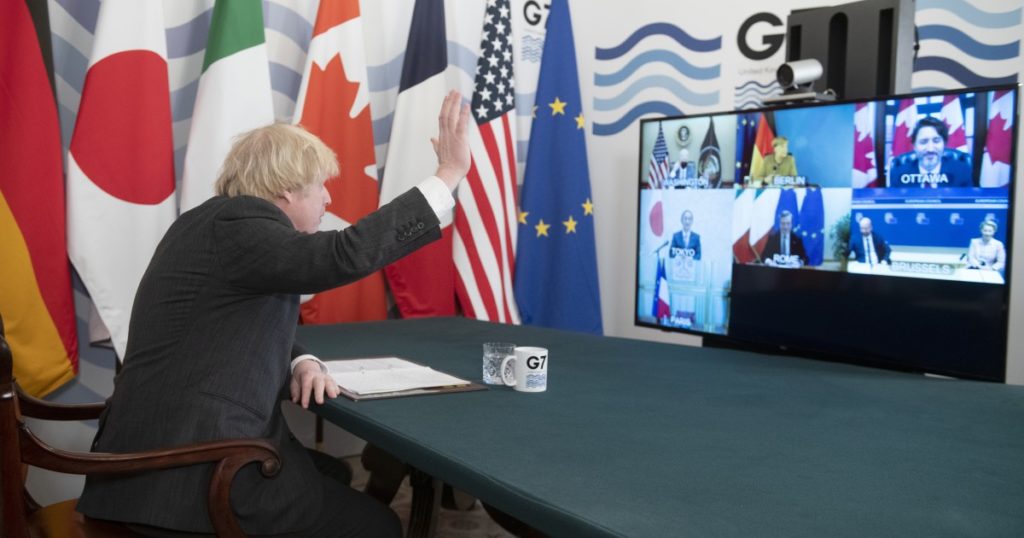 Frustration and divisions remained after a meeting Friday of world leaders, President Biden’s first since taking office, as they sought to reach agreement on a more effective international vaccination effort.

The United States and allied nations are under pressure to ramp up the global fight against COVID-19 even as the pandemic continues to afflict their own citizens, a challenge that blends public health imperatives, high-stakes diplomacy and domestic political risks.

Failing to act swiftly would mean unnecessary deaths in countries unable to develop or afford their own vaccines and would increase the likelihood of more dangerous mutations emerging to spread around the world. Leading democratic nations also are concerned about losing diplomatic ground to Russia and China, which are attempting to expand their influence by rapidly distributing their vaccines.

The virtual meeting of the Group of Seven industrialized nations left some disappointed despite new promises of support for the inoculation effort in poor countries.

The United States announced that it would provide $4 billion — $2 billion now, and the rest over the next two years — and Germany increased its total pledge to more than $2.5 billion. The United Kingdom said it would eventually contribute surplus vaccines to COVAX, a partnership led by international vaccine alliance Gavi, the Coalition for Epidemic Preparedness Innovations and the World Health Organization to help inoculate the developing world.

“Drawing on our strengths and values as democratic, open economies and societies, we will work together and with others to make 2021 a turning point for multilateralism and to shape a recovery that promotes the health and prosperity of our people and planet,” Biden and the other G-7 leaders said in a joint statement after their meeting.

However, the contributions fall short of the goal set by another member of the group, French President Emmanuel Macron. In an earlier interview with the Financial Times, he said Europe and the United States should quickly provide 5% of their vaccine supplies to low-income nations. He warned that China and Russia were stepping into the void.

“We are allowing the idea to take hold that hundreds of millions of vaccines are being given in rich countries and that we are not starting in poor countries,” Macron said.

U.N. Secretary-General António Guterres said this week that the distribution of vaccines has been “wildly uneven and unfair,” with 75% being administered in only 10 countries so far.

COVAX is aiming to inoculate 20% of the population of low-income countries by the end of the year. Gerd Müller, Germany’s minister of federal economic cooperation and development, said the organization still doesn’t have the resources necessary to accomplish the goal.

“The funding for that has not yet been secured, not even after the G-7 summit,” he said.

Seth Berkley, the epidemiologist who leads Gavi, emphasized that failing to control the pandemic in any single country could allow new variants to develop and then hopscotch around the globe. Mutations have already occurred in South Africa, Brazil and the United Kingdom, and there are concerns that vaccines may be less effective against them.

“As long as this disease continues to circulate anywhere, it’s a risk to people everywhere, even to those who are vaccinated,” said Berkley.

He said the global community should aim to vaccinate healthcare workers and high-risk people before inoculating the young and healthy who are less likely to become seriously ill or die from COVID-19.

Doctors Without Borders also urged the Biden administration to start exporting vaccines. “Rather than hoarding doses, the U.S. should share them,” the organization said in a statement.

But that’s not what’s happening. Vaccine supplies remain limited, and world leaders are careful to emphasize that their contribution to the global fight won’t delay inoculations for their own citizens. “No vaccination appointment in Germany is going to be endangered,” German Chancellor Angela Merkel said.

After the G-7 meeting, Biden visited Pfizer’s 1,300-acre Michigan production facility where it makes its vaccine, one of two approved for distribution in the United States. One warehouse the president toured included 350 freezers capable of storing the vaccine at the ultra-cold temperatures it requires. A company spokeswoman said each freezer held 360,000 doses — enough to inoculate 180,000 people, because the vaccine requires two shots.

All of the doses are expected to be injected into American arms as Biden pledges to bring the pandemic to a close in the United States.

“I can’t give you a date when this crisis will end,” he said. “But I can tell you that we’re doing everything possible to have that day come sooner rather than later.”

Even as Biden tries to manage the politics of the vaccine effort at home, he has to be mindful of the diplomatic stakes and friction on the international scene.

Ursula von der Leyen, president of the European Commission, recently questioned why Russia was exporting its vaccine, known as Sputnik V after the legendary Soviet satellite, before it had inoculated more of its citizens.

“We still wonder why Russia is offering, theoretically, millions and millions of doses while not sufficiently progressing in vaccinating its own people,” she said at a news conference Wednesday. “This a question that should be answered.”

The Russian mission in Brussels shot back that it was providing doses in “the principle of cooperation in combating the common threat, which Russia offers to all members of the international community without exception, regardless of political and economic considerations.”

Chinese Foreign Minister Wang Yi said during a U.N. Security Council meeting that rich countries were hogging vaccines while Beijing was dedicated to distributing them around the world. China is providing 10 million doses to COVAX and has reportedly donated more to 53 countries.