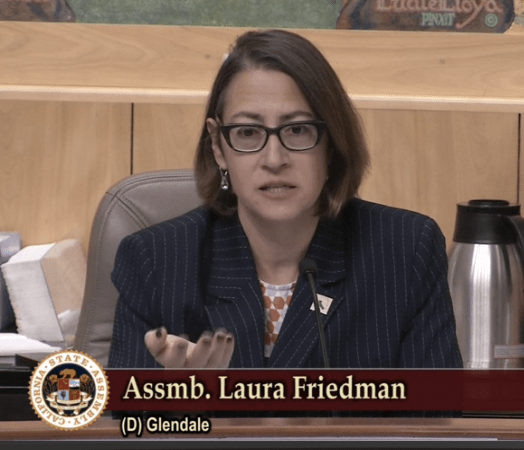 Both Beall and Frazier were instrumental in the passage of S.B. 1, which raised the gas tax to pay for long-deferred maintenance of the state’s transportation system.

New Assembly Transportation Chair Friedman has shown that she understands the perspectives and concerns of people who bike, walk, and take transit, and since she took office in 2016, she has been unafraid to bring up those concerns, even if she’s the only one addressing them.

As a freshman Assemblymember, during the fierce and sometimes off-topic arguments about S.B. 1, Friedman spoke up against an argument that all money raised from gas taxes should go for road expansion to solve congestion. “We know that adding capacity does not decrease congestion,” she said. “Getting people out of their cars decreases congestion.”

She expressed similar sentiments at other times. In a 2017 hearing for an unsuccessful attempt by Assemblymember Chris Holden (D-Pasadena) to legislate an end to the plan to extend the 710 freeway through his and Friedman’s districts, she pushed back on the notion that more freeway means less traffic. “If cars terminating in an area is an issue, then the last thing we should do is . . .  invite more cars into the system,” she said. “What we should be doing is investing in solutions that take cars off the road,” like mass transit and rail and alternative transportation.

Friedman also worked to find a way to allow cities to lower speed limits, a job that turned out to be much more complex than it should be. She succeeded in creating a Zero Fatalities Task Force to discuss the topic. The Task Force issued a report last year that recommended what Friedman had been saying: that the state should change the way it sets speed limits.

Assemblymember Friedman has also shown herself to be willing to do the deep dive into wonky topics. She authored a bill to redefine “major transit stops”; she also wrote a bill requiring future iterations of the California Transportation Plan to consider environmental justice; she has tackled parking regulations.

But Friedman also seems to share the perspective that California High Speed Rail Program is sitting on a lot of money that could be put to better use, and has pushed for funds set aside specifically to electrify the project to be used for unspecified transit projects in the L.A. area.

It will be interesting to see how these issues continue to be spotlighted in the Assembly with Friedman as chair of the Transportation Committee. She will be a change from her predecessor, Assemblymember Frazier. Although he claimed to be an “avid cyclist” and was interested in road safety, as chair Frazier did not come across as a person who understood the need to grow active transportation. Advocates for safety, climate change, environmental justice, and similar issues long chafed at his leadership, but his chairmanship seemed unassailable.

Our transportation sector is at a pivotal moment. Transportation-related emissions are our state’s largest contributor to climate change. Pedestrians and cyclists are endangered and killed because of antiquated street engineering and the prioritization of cars. We need greater investment in mass transit to relieve congestion and improve mobility options. The world during and after this pandemic is going to be very different, and we need to be ready for that.

Lena Gonzalez is a relatively new Senator, having taken office in June of last year; she served on the Transportation Committee, among others, and authored a number of bills on a variety of issues including broadband access and equal access to insurance, none of which got past the COVID-hampered legislative session.

Stay tuned to Streetsblog California for more to come on these appointments and the new legislation session.