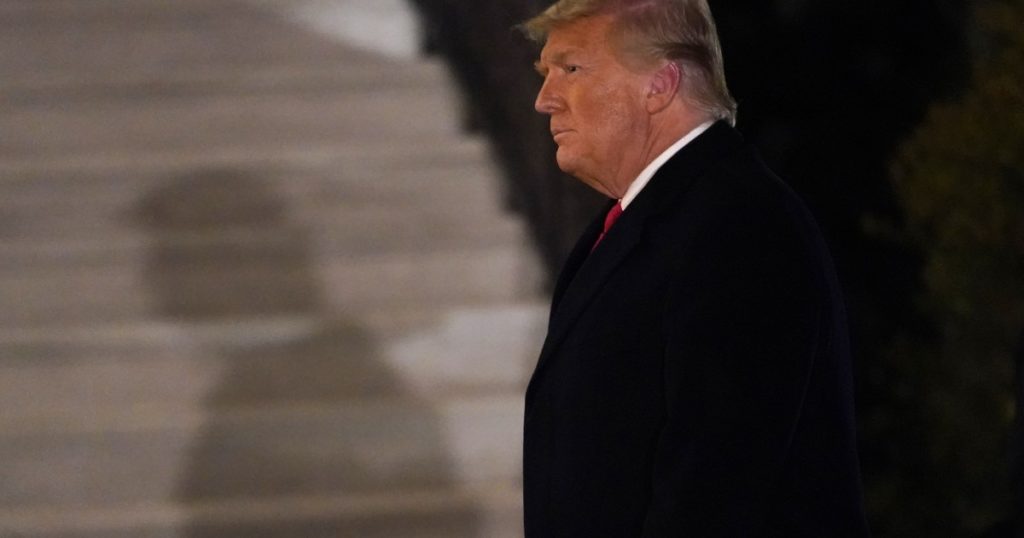 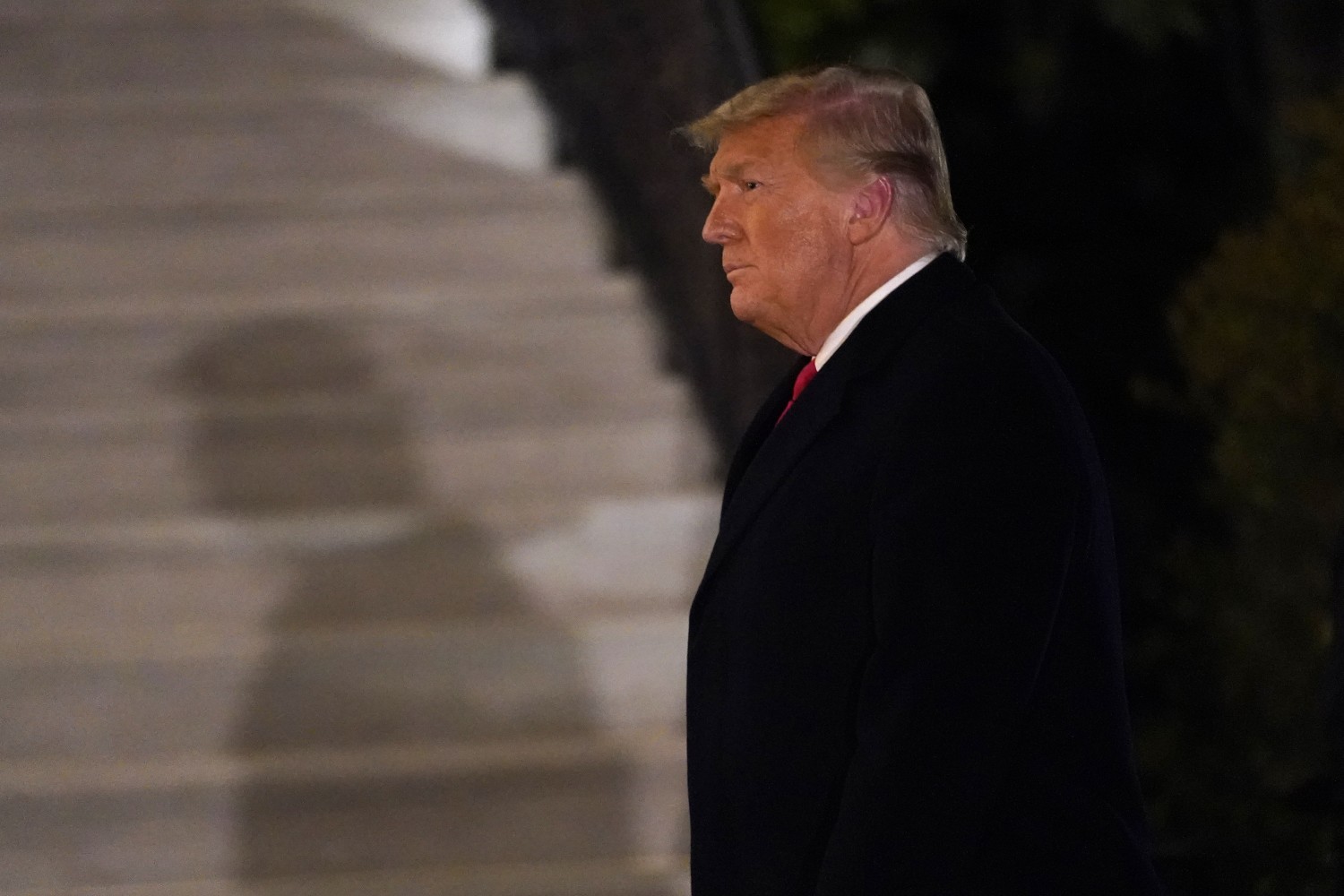 Just a few weeks ago, President Trump, even in defeat after the November election, dominated the Republican Party — able to bend lawmakers to his will and assert a strong claim to the party’s nomination for another White House run four years from now.

Today, as the final days of his presidency hurtle toward their close and the House prepares to impeach him for a second time, Trump’s formidable control of the party has rapidly eroded.

Events have moved so fast, and Trump’s power has waned so quickly, that the prospect of a Senate conviction of the president — either removing him from office before the inauguration next week or voting afterward to bar him from running again — has gone in a matter of days from almost inconceivable to openly under discussion.

That does not guarantee that Trump will be abandoned by the GOP.

He remains popular with a large majority of Republican voters. Even if the House votes today to impeach him, as expected, rounding up 17 Republican senators willing to convict — the number needed if all 50 Democrats were to vote against him — remains a formidable task. Getting anything through the Senate before Inauguration Day would require surmounting procedural hurdles that may be impossible to clear.

But two powerful forces have combined to rapidly erode Trump’s support from fellow Republicans. Both involve events he helped set in motion — last Wednesday’s mob attack on the U.S. Capitol and, the day earlier, the Republicans’ loss of both Senate seats in Georgia.

The first dynamic is personal: Members of Congress in both parties were deeply shocked by last week’s riot, which suddenly made Trump’s conduct a factor in their own lives — forcing them to flee to shelter. That shock has grown as more details of the riot have become public.

Democrats have insistently blamed Trump for inciting the violence. Most Republicans have stopped short of that, but many agree that Trump’s rhetoric played a significant role.

The second is political: Over the past four years, Republicans were willing to excuse Trump’s conduct when they thought he held the key to political power for their party. But the twin defeats in Georgia, which came after Trump repeatedly attacked the state’s Republican governor and secretary of state, shattered that belief.

Today many Republican strategists believe that so long as Trump remains the face of the party, they will be at risk of defeat even in once-reliably red states. Separating from him could cause a deep split in the party, alienating millions of Trump voters, but the risk of keeping him on board is higher, they believe.

Polls that show Trump’s standing with the public dropping to the lowest point of his presidency have reinforced their desire to be rid of him. So have announcements by businesses that they will no longer give Republicans money.

In the aftermath of the Georgia results, senior Republicans, especially Sen. Mitch McConnell of Kentucky, who is about to become the minority leader because of the Georgia defeats, had already begun looking for ways to separate their party from Trump. The riot added urgency to that quest.

On Tuesday, associates of McConnell’s told several news organizations that he could support impeachment.

The clearest public evidence of Trump’s decline could be seen as the House began debate on efforts to remove him from office. In speeches and written statements, only a handful of Republicans, almost all from the party’s extreme right, defended his conduct. Most of those who said they would vote in his favor confined themselves to arguments about process or objections that ending his tenure early would be divisive.

Not one of the top three Republicans in the House spoke Tuesday night during debate on a resolution to urge Vice President Pence to use the 25th Amendment to remove Trump from office. One of the three, Rep. Liz Cheney of Wyoming, has announced her support for impeachment. The other two, Minority Leader Kevin McCarthy of Bakersfield and Rep. Steve Scalise of Louisiana, left the defense of the president to Rep. Jim Jordan of Ohio, one of Trump’s most loyal backers.

The reticence of Trump’s onetime allies stood in sharp contrast to the full-throated defenses they offered a year ago during the first impeachment.

Their lack of a strong defense this time also contrasted with the passionate denunciations from the handful of Republicans who said they back impeachment.

Shortly before the debate began, Cheney, for example, excoriated Trump for helping incite the rioters.

“The president of the United States summoned this mob, assembled the mob, and lit the flame of this attack. Everything that followed was his doing,” Cheney said.

“There has never been a greater betrayal by a president of the United States of his office and his oath to the Constitution.”

Another of the Republican supporters of impeachment, Rep. Fred Upton of Michigan, admitted that he feared the move would “interfere with important legislative business and a new Biden administration.”

“But it is time to say: enough is enough,” he wrote. “The Congress must hold President Trump to account.”

Jordan, who received the presidential medal of freedom from Trump on Monday, made little effort to counter those arguments. Instead, he devoted most of his time to criticizing Democrats for what he labeled their “obsession” with impeaching Trump and warning against what he referred to as left-wing “cancel culture.”

“Democrats have been consistent about one thing — their endless quest to overturn the 2016 election,” Jordan said.

“Cancel culture,” he added, “will come for us all. That’s what’s frightening.”

“The cancel culture of violent white supremacy tried to cancel out all of our lives last Wednesday,” Raskin said.

A Senate vote against Trump remains uncertain. What is clear is that the events of the past week have done what four previous years could not — shatter Trump’s unquestioned hold over a party that he once conquered, but no longer controls. His future now depends on how rapidly his decline accelerates. He has seven days left.