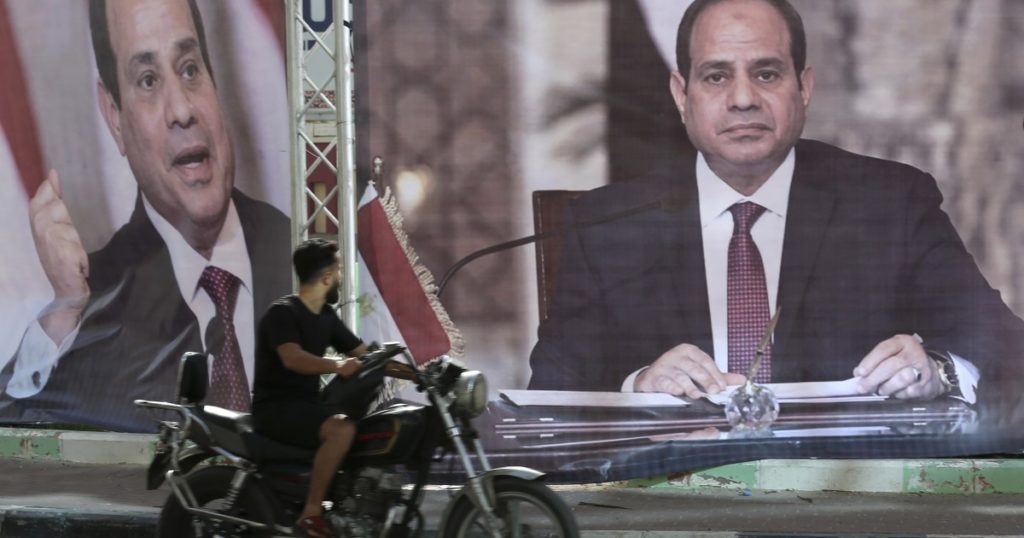 Egyptian President Abdel Fattah Sisi sat at the head of the ornate room, on a chair that seemed slightly bigger than the rest, thronelike. Even through his COVID mask, it was clear he was not smiling.

His visitor, the first envoy from the new Biden administration, was relegated to the side chairs with other members of the U.S. and Egyptian delegations.

Secretary of State Antony J. Blinken had called on the notorious strongman, a military man whom former President Trump once called his “favorite dictator,” to thank him for helping stop a war between Israel and the militant group Hamas.

It was an awkward position for Blinken. Human rights, he has said repeatedly, are at the core of Biden-era foreign policy — and human rights are not something Sisi regards favorably. He jails and tortures dissidents, journalists and others, activists say, and has been accused of repeatedly ordering deadly fire on peaceful demonstrators.

But Sisi, as Egyptian leaders have before him, helped defuse violence between Israel and Palestinian groups. So Blinken made the high-level visit to offer thanks, which Sisi will attempt to leverage to influence Washington and to skirt criticism. During his campaign, President Biden promised “no blank checks” for Sisi, but Egypt has long parlayed its recognition of Israel into an alliance in which U.S. officials tended to look the other way when it came to abuses.

“Egypt played a crucial role in brokering the cease-fire,” Blinken said later in discussing his meeting with Sisi. He insisted that he raised human rights issues with the Egyptian leader. “We had a lengthy exchange on that with President Al Sisi as a reflection of the fact that it remains very much on the agenda with Egypt.”

Before the meeting late last month, reports had circulated among diplomats that Sisi would release a number of detained American citizens as a good-faith gesture. That did not happen.

Blinken and Sisi met for one hour and 45 minutes, with Sisi speaking for more than an hour without interruption, according to people familiar with the encounter. He extolled his own achievements in what he considers true human rights: making daily life better for ordinary Egyptians. Political rights or the right to dissent do not figure in his narrative.

Journalists accompanying Blinken on his trip were given about 30 seconds to view the initial seating of the meeting, but no more. Once during an earlier visit, Vice President Mike Pence answered a question from the attending journalists and invited Sisi to join in. The Egyptian was appalled at such openness, refused to engage and subsequently fired several palace aides who he blamed for allowing such an affront, according to diplomats.

This time, Sisi’s supporters in the mostly state-controlled Egyptian media celebrated Blinken’s visit and two telephone calls from Biden as validation of the government’s tactics and its recovered importance to regional diplomacy.

Critics said the diplomatic niceties obscure the ruthlessness of the government.

Sisi, 66, a former minister of defense and head of military intelligence, began his rise to power in a July 2013 coup against democratically chosen President Mohamed Morsi, and eventually won election as president in 2014.

Human Rights Watch, in an extensive report, held Sisi at least partially to blame for a massacre of hundreds of government critics, including many Muslim Brotherhood members, in July and August of 2013.

“His utmost concern is the sustainability of his regime, with him at the top of that regime, and he is ready to do whatever he can for the sustainability of the regime,” said Bahey eldin Hassan, director of the Cairo Institute for Human Rights Studies, which has repeatedly urged the Sisi government to end its crackdown on peaceful dissent.

Sisi sees enemies everywhere, Hassan and other human rights experts said — especially from among Islamists like the Muslim Brotherhood that backed Morsi, and activists who would hold him accountable for repeated killings of dissidents. Sisi does not tolerate internal debate, much less public criticism, said people who know him.

Hassan fled to France after the Sisi judiciary prosecuted him twice for what he says was his work on behalf of human rights. The activist blames decades of U.S. “political support and complicity” for strengthening the hands of autocratic Egyptian rulers. Egypt receives roughly $1.3 billion annually in military aid, second only to Israel, and the Biden administration is asking for the same amount for next fiscal year.

“I’d just like President Biden to keep his promises from the campaign,” Hassan said in a telephone interview, referring to Biden’s pledge to work to free tens of thousands of political prisoners said to have been detained under Sisi.

Egypt has for decades enjoyed a unique spot in U.S. foreign policy and the geopolitics of the Middle East.

Through successive U.S. administrations, Washington upheld a string of Egyptian strongmen, from the late Anwar Sadat and Hosni Mubarak, to Sisi now. Until last year, Egypt, along with Jordan, was one of only two Arab nations to recognize Israel. That vital role led Washington to ignore many of the abuses of Cairo governments while enlisting their help in protecting Israel.

The role came into focus again last month when it took Sisi and Egypt to persuade the militant Hamas organization based in the Gaza Strip to agree to stop its rocket fire onto Israeli cities and towns. Israel responded with heavy aerial bombardment that devastated parts of the Gaza Strip including residential buildings and schools. Because the U.S. formally regards Hamas as a terrorist group, it cannot negotiate with its leaders directly.

For Sisi, it was a welcome opportunity to prove his mettle to the Biden administration and to counter a shift in U.S. attentions to Persian Gulf nations after several agreed to recognize Israel as part of the 2020 Abraham Accords brokered by the Trump administration.

“Egypt is working hard on reclaiming and cementing its role as a significant international player that can be an ally, rather than a liability,” Mirette Mabrouk, founding director of the Egypt program at the Washington-based Middle East Institute, wrote in a recent analysis.

That includes Sisi’s intervention in Libya, where he has sought to mediate among warring factions, and in the debate over a massive dam on the Nile that pits Egypt against Ethiopia and Sudan.

Sisi was unsure of the Biden administration, experts said, following four years of latitude under Trump.

For example, Blinken’s predecessor called on Sisi in January 2019. And rather than raise human rights issues, Trump’s secretary of State, Michael R. Pompeo, praised Sisi for what he called an embrace of religious freedom because he had allowed a Coptic Christian church to be built in a Cairo suburb. (Shortly thereafter, Egypt built a mosque nearby.)

Under pressure from the Trump administration and advocacy groups, Sisi last year released an American arts teacher who had been detained for 300 days, Reem Desouky. But another U.S. citizen, Moustafa Kassem, died in Egyptian custody. The United Nations estimates that there are half a dozen Americans among the tens of thousands of political prisoners in Egypt.

Sisi hopes his ability to influence Hamas will help keep Washington off his back, said Nimrod Novik, an Israeli foreign policy analyst who worked for the late Prime Minister Shimon Peres and has continued close ties with Egyptian intelligence officials.

“He was very apprehensive about the dual phenomenon of a Biden administration and a Democratic Congress,” Novik, a senior fellow at the U.S.-based Israel Policy Forum advocacy group, said in an interview. “There was great concern on that score: America is back, and human rights are back.”

Administration officials reject the idea that Sisi will be able to leverage his usefulness in Hamas negotiations to thwart their concern about human rights. They are able to address the issues in compartmentalized ways, they say.

“President Biden takes the issue of human rights and our commitment to human rights very seriously,” Blinken said in a news conference. “Indeed, he’s asked us to put it at the heart of our foreign policy, and that’s exactly what we’re doing, and that was reflected in the conversations that we had” with Sisi.