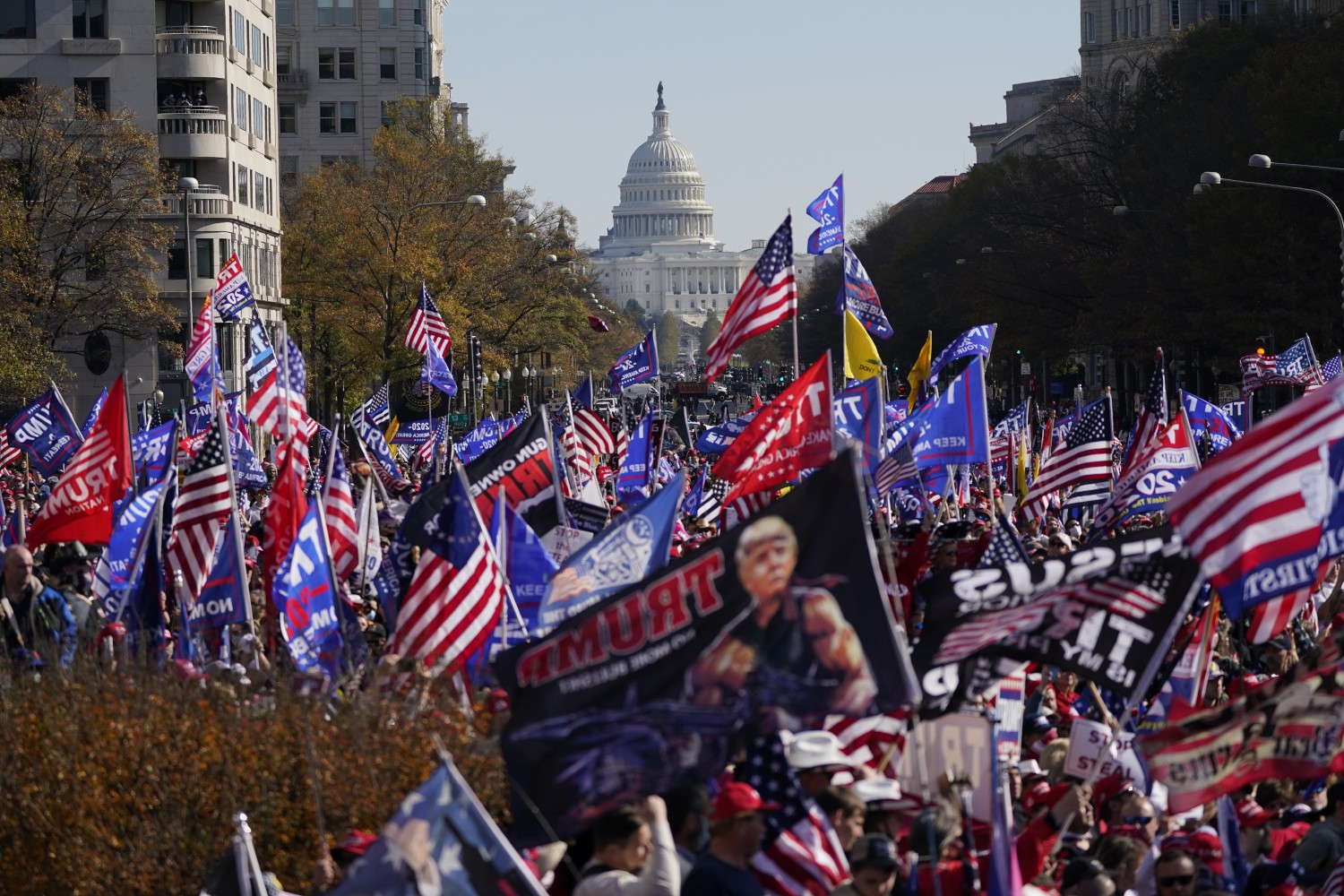 When the 2020 presidential election was called for Joe Biden and thousands of his supporters gathered at barricades around the White House to celebrate, President Trump wasn’t there to hear it. He was at a golf course in Virginia. Not a “MAGA” hat or “Trump-Pence” sign could be found, either.

But on Saturday, several thousand Trump supporters, GOP voters, white nationalists, militant groups and conspiracy theorists descended on Pennsylvania Avenue and Freedom Plaza near the White House to voice their support for the president, who has yet to acknowledge his loss to now President-elect Biden.

Buoyed by Trump, who drove past and waved at protesters on his way back to the golf club Saturday morning, the “Stop the Steal” march in the nation’s capital echoed the president’s baseless complaints about voter fraud.

“We want all of these votes audited and recounted,” one woman attending the march told CNN, holding a sign reading “Stop the Steal” and an American flag, as Queen’s “We Are the Champions” played over loudspeakers in the background.

The president’s legal team, now reportedly led by personal lawyer and former New York Mayor Rudy Giuliani, may be running out of time as it pursues complaints and lawsuits in several states. Some states will hit legal deadlines this week to finalize their election results, and by law, all recounts and challenges must be finished by Dec. 8.

Though almost no legal experts think Trump has any real chance to change the outcome, the president has been encouraging his supporters to make noise. Emerging Saturday morning from the White House in his own red “MAGA” hat, the presidential limousine weaved through Freedom Plaza as crowds cheered and waved.

Many participants poured in from other cities; Biden won nearly 95% of the capital’s vote. Few masks could be seen among the march’s attendees as they moved past the plywood still covering many businesses in downtown Washington that boarded up windows amid the summer’s protests against injustice, and out of a fear of possible election-related violence, which largely hasn’t materialized.

A week earlier, when the election was called for Biden, throngs of his supporters gathered outside the White House for an impromptu celebration.

Trump officials are ordering agencies to not assist in the transition, even as members of Congress from the president’s party, as well as his own former chief of staff, call for Biden to be given access to crucial intelligence briefings and key resources.

The Biden team, for its part, insists it’s forging ahead with forming the next administration in the waning days of Trump’s, and announced transition teams for key agencies this week. On Wednesday Biden named longtime advisor Ron Klain, “Ebola czar” under the Obama administration, as his chief of staff.

On Friday evening, Trump spoke from the Rose Garden in his first public address since losing the election, taking credit for a promising coronavirus vaccine while at the same time ignoring the rising death toll from the pandemic.

As of Friday, few of several rallies slated to start around noon Saturday, mostly organized online, had applied to receive a permit from the National Park Service, save for one “Women for America First” event, according to the Washington Post. But opposing groups expected to gather, as well.

On Saturday afternoon, as the march headed from near the White House to the Supreme Court, skirmishes broke out between counterprotesters and Trump supporters as well as members of the extremist group Proud Boys, sporting their trademark black and yellow. Authorities intervened.

Cindy Chafian of Women for America First spoke to the crowd, seeming to mock Washington’s COVID-19 guidelines. “Wear a mask, unless you’re with family — hello, family,” she said, to laughter. She blamed the isolated scuffles on “opposition groups.”

“Just ignore them,” she said. “We the people are speaking, and they’re scared … we’re not here for violence.”

A smaller contingent of Biden supporters also turned out Saturday to greet Trump at the golf club in Virginia, holding “Biden-Harris” signs. One read: “We voted. You’re fired.”