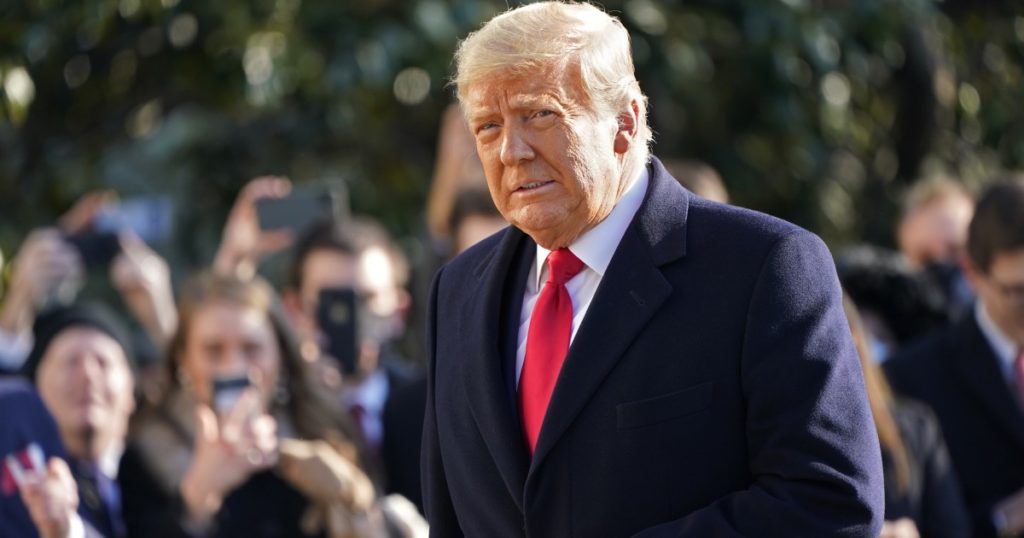 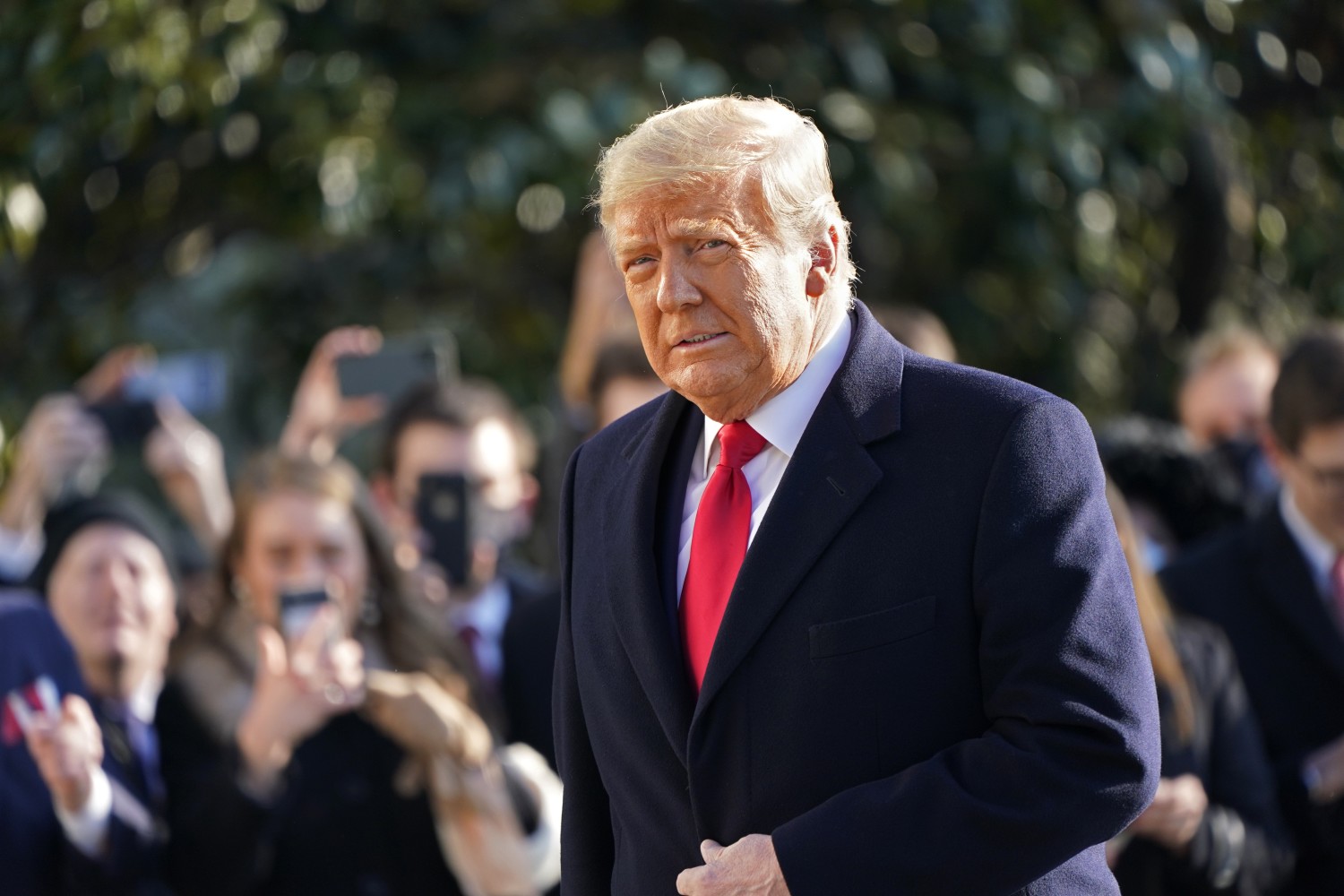 Frustrated by the loss of his Twitter account and forced to accept that he soon must leave office, President Trump has effectively stopped doing his job, delegating daily responsibilities to Vice President Mike Pence while hunkering down with a shrinking group of acquiescent aides and contemplating additional presidential pardons.

Trump had considered leaving the White House before his final day in office Wednesday, even as early as this weekend, but he has opted to depart on the morning of President-elect Joe Biden’s Inauguration Day, according to two people familiar with discussions who cautioned that, with Trump, plans are always subject to change.

Intrigued by the idea of upstaging Biden, the ever self-centered president has requested a major sendoff. It would begin with a throng of cheering, flag-waving staffers and supporters to see him off on the White House’s South Lawn, according to a person familiar with the planning, and continue to a more formal ceremony at Joint Base Andrews, featuring a red carpet, military band, color guard and 21-gun salute. He’ll make his final Air Force One flight to Florida, to take up residence at Mar-a-Lago, his West Palm Beach, Fla., estate.

While Trump is still unwilling to formally concede to Biden directly, or to participate in the traditional show of the peaceful transfer of power by attending his successor’s swearing-in, Pence on Thursday called Vice President-elect Kamala Harris and “congratulated her and offered assistance ahead of inauguration,” according to a person familiar with the call.

Pence, his relationship with Trump all but severed now because he refused to abet the president’s efforts to defy the Constitution and overturn the election result, confirmed earlier in the week that he plans to attend Biden’s inauguration. Trump, in one of his final tweets last week, made it clear he would not be going.

Previously, Trump had floated the idea of leaving town early to avoid having to host Biden at the White House before the inauguration ceremonies at the Capitol, as has long been traditional — to provide the time-honored photo of the outgoing and incoming presidents that gives visual definition to America’s peaceful transfer of power. Though he now might stay until Inauguration Day, Trump still has no plans to meet with the president-elect.

His administration this week did extend one traditional courtesy, inviting Biden and his wife, Jill Biden, to stay at Blair House, just across Pennsylvania Avenue from the White House, on the eve of the inauguration.

Finally forced by the bipartisan furor after last week’s insurrection at the Capitol to acknowledge the “new administration” — if not his defeat — Trump has withdrawn almost completely from the duties of the job he fought so hard to keep. Aides and friends who have spoken with him this week describe him as “irate” about Twitter deleting his account, but also say he’s been sobered somewhat by warnings from his lawyers about his potential legal liability for inciting last week’s deadly riot.

Since the moment the pro-Trump mob smashed through the Capitol doors and into the House and Senate chambers to stop Congress’ count of the electoral votes, Pence has effectively taken over the responsibilities of the presidency. With Trump mesmerized by live television coverage of his supporters fighting for him, it fell to Pence — who’d been presiding over the count, and had to be rushed into hiding — to authorize the deployment of the National Guard in the District of Columbia to quell the mob.

Just a week later, the president was watching television again — with country music star Toby Keith, to whom he gave a medal — as the House voted to impeach him for inciting an insurrection, making him the only president to be impeached twice. He was confident the Senate again would fail to convict him, according to one person who speaks with him regularly, and focused mostly on his ire at the 10 House Republicans who voted in favor of impeachment, peppering aides with questions about who some of the lawmakers were and what he could do to exact revenge.

Trump spent time Thursday instructing aides to knock down reports of his frustration with Rudolph W. Giuliani, one of the few outside attorneys still willing to defend him. That afternoon, while Trump took farewell photos with staffers as others loaded boxes into moving vans and cars just outside the West Wing, Pence visited the headquarters of the Federal Emergency Management Agency for a briefing about security preparations for the inauguration ceremony.

After the meeting, Pence told reporters that the government would “ensure that we have a safe inauguration, that President-elect Joe Biden and Vice President-elect Kamala Harris are sworn in … in a manner consistent with our history and traditions.”

On his way home, Pence stopped to greet some of the 20,000 National Guardsmen posted outside the Capitol, thanking them for their service to ensure the inauguration ceremonies are safe.

By Friday, Trump still had not addressed the nation about reports from the FBI and other law enforcement agencies that domestic terrorists, emboldened by the breach of the Capitol that left at least five dead, threatened not only the inauguration but all 50 state capitals. One of his staunchest defenders, My Pillow Chief Executive Mike Lindell, was spotted around an otherwise quiet White House.

Pence is also scheduled to deliver an address Saturday on the administration’s “foreign policy accomplishments” at California’s Naval Air Station Lemoore, and then to the 10th Mountain Division, in Fort Drum, N.Y., his office announced Wednesday.

Typically, outgoing presidents take part in an official farewell ceremony with members of the armed forces. Trump, however, isn’t bothering. On Thursday, the White House emailed a brief statement to reporters from Trump that could mark a final, 67-word valedictory. It was, above all, a salute to himself.

“United States military troops in Afghanistan are at a 19-year low. Likewise, Iraq and Syria are also at the lowest point in many years,” the president said. “I will always be committed to stopping the endless wars. It has been a great honor to rebuild our military and support our brave men and women in uniform. $2.5 trillion invested, including in beautiful new equipment — all made in the U.S.A.”

Spending his final days almost entirely out of view, Trump is said to be readying a number of pardons and weighing whether to give one to himself. A self-pardon would be an act of untested and dubious constitutionality and one — at a time when he and his family business are under investigation — suggesting indifference to the law in an effort to inoculate himself from any federal prosecutions.

Those who have been in contact with the president are loath to predict whether he will go through with the brazen move. His calculations now must be weighed against the unsettled matter of his impeachment trial in the Senate; a conviction could bar him from ever seeking office again.

Senate Majority Leader Mitch McConnell (R-Ky.) made it clear in a statement Wednesday that he is open to voting in favor of Trump’s conviction, a move some administration officials say was intended to dissuade the president from a self-pardon or any other damaging moves in his final days.

“He knows self-pardon is fraught, will invite scrutiny and does not protect him from state actions,” one former senior administration official said of Trump. But the calculation, the official said, was more about “whether it’s ultimately worth the scrutiny and hassle” than any impeachment endgame.