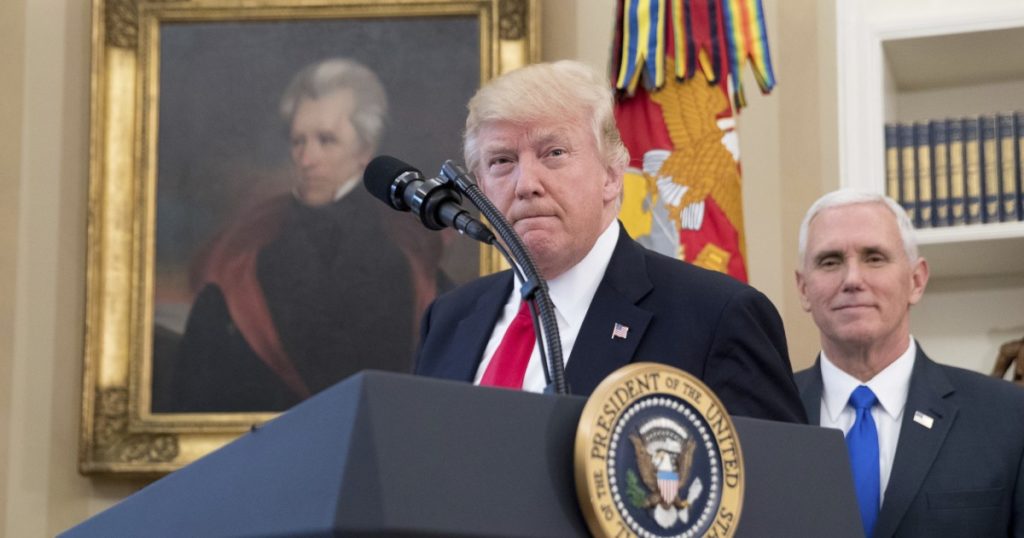 President Trump falsely asserted Tuesday that Mike Pence can singlehandedly “reject” Joe Biden’s electoral college victory when Congress meets Wednesday to officially count the election results, putting his stalwart vice president in a vise — between showing loyalty to him or following the Constitution.

Pence is tasked constitutionally with merely presiding over a joint session of Congress while it approves the final count of each state’s certified results, and has no power to change the outcome.

Yet Trump and a few allies, including several senators jockeying for his favor and that of his supporters’ — to be Republicans’ next standard-bearer — have continued to suggest without evidence that the election was fraudulent and that Congress could overturn the result.

Putting the onus squarely on Pence, Trump tweeted: “The Vice President has the power to reject fraudulently chosen electors.”

Pence, who has assiduously demonstrated fealty to Trump throughout the tumultuous presidency, has presidential aspirations of his own. But aides close to the vice president have made clear that Pence will carry out his largely ceremonial role even if it means being the person who formally declares that Joe Biden has defeated Trump.

That is all but certainly what he will have to do, inviting the wrath of Trump despite Pence’s four years of unbroken loyalty. What’s more, he will be presiding over the debate even as several would-be rivals for Republicans’ 2024 presidential nomination — among them Sens. Josh Hawley of Missouri and Ted Cruz of Texas — are endearing themselves to Trump by leading the doomed charge for him.

Congress’ process, outlined in the Electoral Count Act of 1877, amounts to a final tabulation of the electors submitted by the states three weeks ago. The law provides a process for resolving disputes if a state were to submit multiple slates of electors, but no state has done so in this case. All 50 states and the District of Columbia have certified their results, showing Biden won 306 electors’ votes to 232 for Trump.

With most Republican senators having already signaled they will vote along with Democrats to accept the states’ results, any challenges of some states’ results by Trump allies — at least 14 senators and about two-thirds of Republicans in the House have committed to protest — are certain to fail.

Pence, defeated for reelection along with Trump, won’t be the first vice president in the unpleasant position of having to preside over Congress’ vote making his rejection official. In January 2001, Vice President Al Gore, the Democratic 2000 presidential nominee, was in the chair as Congress declared George W. Bush the winner.

“In the rules, he does not have any decision-making authority over objections,” Rick Hasen, a professor of constitutional law at UC Irvine, said of Pence. “He is basically supposed to hand over the envelopes with the names of electors. There is not a role for him to act like a chief justice who makes rulings in impeachment.”

In a statement from his chief of staff over the weekend, Pence signaled that he supports the Republican lawmakers’ plans to challenge some states’ slate of electors, but that those actions must be based on solid evidence. Although Pence has tried privately to explain and prepare Trump for what a vice president is obligated to do, the president has not shown any willingness, at least in public view, to accept the process outlined under the Constitution.

“In this electoral college business, the vice president is just a Dalmatian on the fire engine. Purely ceremonial,” said Scott Jennings, a former advisor to Senate Majority Leader Mitch McConnell (R-Ky.). “But Trump thinks he’s captain of the brigade, which just isn’t true.”

During a campaign rally Monday night, ostensibly to support Georgia’s two Republican senators in runoff elections that will decide control of the Senate, Trump let forth a stream of election-fraud conspiracy theories, declaring himself the winner and threatening that his supporters would “remember” lawmakers who don’t fight for him.

For two months, Trump has refused to accept his clear loss in both the popular vote and the electoral college. Dozens of legal challenges have failed while state recounts and audits have only confirmed Biden’s victory, and no evidence of widespread voter fraud has been unearthed.

Yet the president and his allies have continued to amplify bizarre conspiracy theories from the outer reaches of the conservative media sphere, hardening the belief among Trump’s most faithful supporters that the election was stolen from him.

“It’s total gaslighting,” said Hasen, the author of a book on American’s eroding faith in the democratic process. “It’s lying to the American public about voter fraud and irregularities and then using the public’s lack of confidence in the election as an excuse to further obstruct the counting of the electoral college votes.

“It’s outrageous, despicable and it’s anti-American. People like Ted Cruz know better and they should be ashamed.”

Hundreds of Trump fans, including armed right-wing groups, have already descended on the capital for a two-day “Stop the Steal” protest rally to coincide with Congress’ session, prompting city officials to enlist National Guard troops to ensure peace. The protestors have been encouraged by the president — who plans to address them on Wednesday — to believe they can pressure Republican lawmakers to subvert the election result and enable Trump to remain in office.

As Trump tweeted Tuesday, “Washington is being inundated with people who don’t want to see an election victory stolen by emboldened Radical Left Democrats. Our Country has had enough, they won’t take it anymore! We hear you (and love you) from the Oval Office. MAKE AMERICA GREAT AGAIN!”

In a second tweet, he called Republicans who opposed the election challenge as “weak and ineffective” and used the acronym RINO, for “Republicans in name only” — explicitly singling out McConnell as well as second-ranking party leader Sen. John Thune of South Dakota and Sen. John Cornyn of Texas. He warned them to see “the thousands of people pouring into D.C. They won’t stand for a landslide election victory to be stolen.”

Trump’s ultimate loyalty test for Republicans has split the party open in the final days of his presidency, with obvious implications for the 2024 presidential-nomination race. While Hawley and Cruz have ingratiated themselves with Trump for vowing to challenge the count, other Republicans with presidential ambitions, notably Sen. Tom Cotton of Arkansas, have elected to respect the democratic process and reject the challenge.

During Trump’s 85-minute rally speech Monday night, he combined his overt pressure on Pence with lavish praise for Cruz, Hawley and others.

Pence, in the run-up to the November election, ramped up his campaign schedule, eager to position himself as the inheritor of the president’s political movement. Trump has made clear that he intends to continue to play kingmaker in Republican politics, and won’t rule out another campaign of his own for the White House.

“People are placing bets on what the president’s future influence looks like,” said Michael Steel, a Republican consultant and former top aide to House Speaker John Boehner (R-Ohio). Trump’s continued dominance of Republican politics is no certainty, Steel added. Referring to the Georgia Senate races, he said, “If the president’s efforts to cast doubt on the election cost us one or two Senate seats, his future influence may be more limited more quickly than it otherwise would be.”

Pence, Steel continued, “still has a natural argument that he is the best candidate in 2024 to unite the Trump base with more traditional conservatives. But that’s assuming the president doesn’t run himself.”