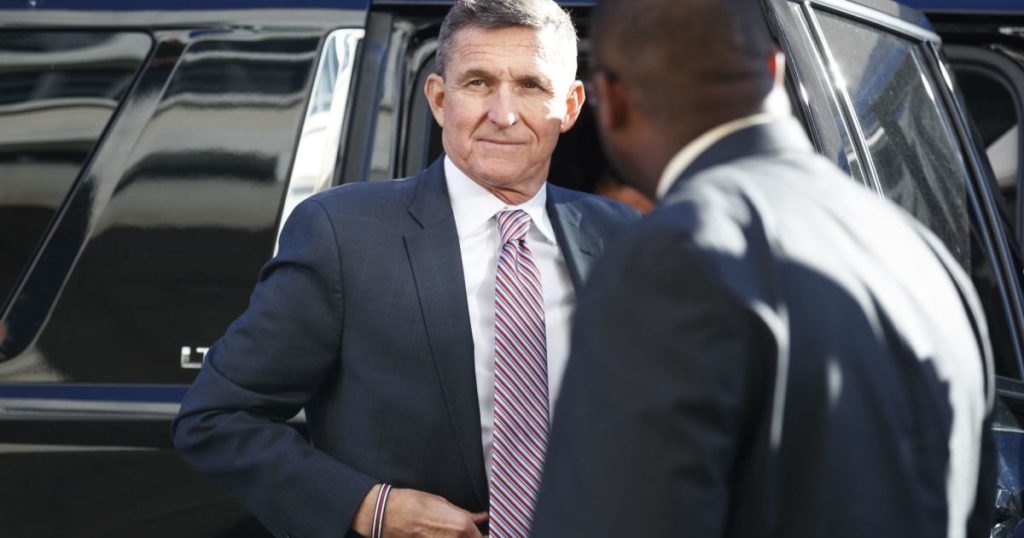 President Trump issued a full pardon Wednesday to Michael Flynn, his first national security advisor, rewarding a loyalist who pleaded guilty to lying to the FBI during the Russia investigation.

Flynn, a retired three-star Army general, was the only White House official charged by special counsel Robert S. Mueller III during the inquiry into Russian meddling in the 2016 election.

Flynn admitted to lying to federal agents in early 2017 about his conversations with the Russian ambassador. The scandal forced Flynn out of the White House after only 24 days, the shortest tenure of any U.S. national security advisor.

He later tried to withdraw his guilty plea and accused law enforcement officials of unfairly targeting him.

Trump announced the pardon, which was widely expected, on Twitter. It wipes the felony conviction from Flynn’s record.

“Congratulations to Gen. Flynn and his wonderful family,” Trump tweeted. “I know you will now have a truly fantastic Thanksgiving!”

Rep. Adam B. Schiff (D-Burbank), who heads the House Intelligence Committee, was among those who condemned the pardon as unwarranted.

Trump, he said, “has once again abused the pardon power to reward Michael Flynn, who chose loyalty to Trump over loyalty to his country.”

Flynn’s fight to clear his name after initially pleading guilty made him a hero to Trump’s allies. During the campaign the president publicly mused about bringing him back in a second term.

“He’s gone through hell. He’s been destroyed, but he’ll make a comeback,” he said in July.

Trump chose Flynn as his national security advisor after winning the 2016 election, but the president fired him less than a month later for lying to Vice President Mike Pence and other White House officials about his conversations with the Russian ambassador.

Prosecutors said Flynn told similar lies to federal agents in an interview at the White House four days after Trump was inaugurated, and Justice Department officials feared he could be vulnerable to a blackmail attempt by Moscow.

“I had to fire General Flynn because he lied to the vice president and the FBI,” Trump tweeted the day after Flynn pleaded guilty in December 2017.

After Flynn replaced his lawyers and hired attorney Sidney Powell, his case became a central focus for concerns about improper political influence in law enforcement. Since the election, Powell has trumpeted Trump’s false claims about election fraud, although the campaign recently said she does not represent the president.

In the spring, Barr abruptly asked the court to dismiss the case against Flynn, saying it did not have proper legal foundation, alarming former Justice Department officials who saw no precedent for his decision.

Sullivan did not grant Barr’s request, instead appointing a former federal judge to conduct a review. The former judge, John Gleeson, eviscerated Barr’s arguments to dismiss the case, calling them “preposterous.”

It was, Gleeson wrote in a court filing, “an unconvincing effort to disguise as legitimate a decision to dismiss that is based solely on the fact that Flynn is a political ally of President Trump.”