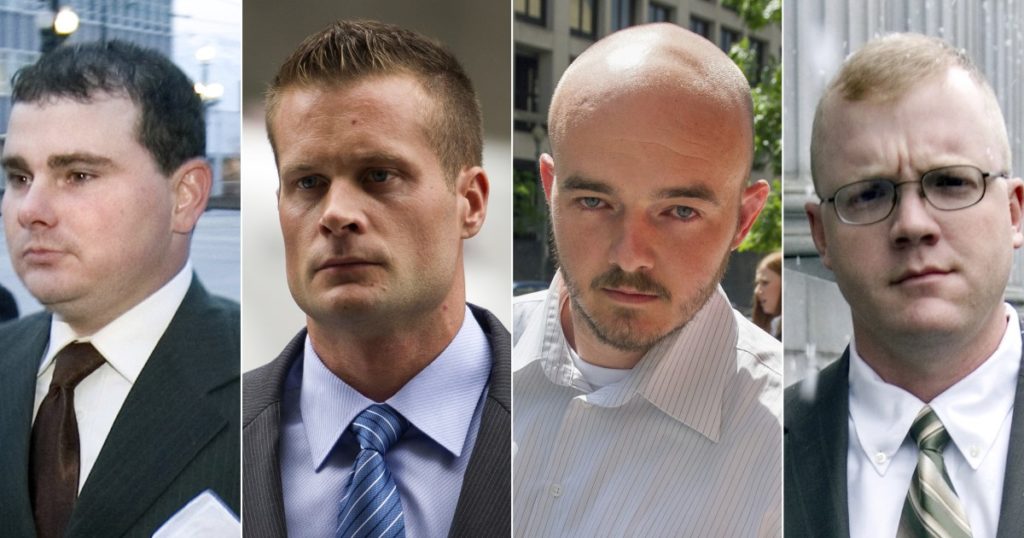 It was around noon in Baghdad on Sept. 16, 2007, when “Raven 23,” a four-SUV convoy and tactical support team for the private military company Blackwater approached Nisour Square.

Blackwater guards jumped out of the vehicles to stop traffic for a U.S. diplomatic team. At 12:08 p.m., Nicholas Slatten, the team’s sniper, began firing at a white Kia sedan.

Over the next 20 minutes, the guards used heavy-caliber machine guns and grenade to kill 17 Iraqi civilians — including two children — and wound 17 others. The FBI determined that there was no justification for at least 14 of the killings.

The massacre spurred a wave of international outrage over a culture of impunity surrounding private security contractors. It took nearly eight years, but five members of Raven 23 were eventually convicted in the case and sent to prison.

On Tuesday evening, President Trump pardoned four of them, a decision that reflected his tolerance for illegal military violence and reignited anger over one of the most disturbing episodes in the U.S. invasion and occupation of Iraq.

“President Trump has hit a disgraceful new low with the Blackwater pardons,” said Hina Shamsi, director of the National Security Project at the American Civil Liberties Union. “These military contractors were convicted for their role in killing 17 Iraqi civilians and their actions caused devastation in Iraq, shame and horror in the United States, and a worldwide scandal.”

Iraqi politicians and other figures also took to social media to excoriate Trump for the move.

“Pardoning the Blackwater killers is renewing the crime committed against the Iraqi people,” tweeted Muhammad Waeli, an Iraqi commentator.

Adversaries of the U.S. used it as proof of Washington’s disingenuousness.

“There must be a position not just from the Iraqi government, but from international societies and rights groups, that the United States operates with double standards,” Naeem Aboudi, an Iraqi parliamentarian and former spokesman for Asaib Ahl al Haq, a paramilitary faction allied with Iran, said in a phone interview.

“These men were tried in U.S. courts, they are killers, and it was a very clear crime, with innocent defenseless civilians as its victims killed in cold blood.”

In a statement announcing the pardons — among 20 pardons or commutations the president issued Tuesday — the White House said they were “broadly supported by the public.”

Overturning the convictions had become a cause celebre. Supporters of the guards have long insisted that evidence had been distorted and tried to cast doubt on investigations conducted by Iraqi police.

“God bless the president for having the courage — which a lot of other presidents wouldn’t do — to pardon those men, those veterans who were there defending diplomats, put in an impossible situation,” Pete Hegseth, a Fox News host and former officer in the Army National Guard, said on the air Wednesday.

The investigation into the Nisour massacre was the FBI’s largest and most expensive criminal investigation since its probe into the terror attacks of Sept. 11, 2001.

Dozens of witnesses were flown from Iraq to Washington for the trial, according to Paul Dickinson, a lawyer for families of victims of the shooting.

“None of the victims had weapons,” he tweeted. “They were all shot and killed or wounded in their cars.”

He said the youngest, 9-year-old Ali Kinani, was in the backseat of his father’s SUV when the car was hit with a barrage of bullets. One round split open the boy’s head. Other victims included a 70-year-old farmer.

The prosecution had been a torturous one. Jeremy Ridgeway — a Blackwater contractor who was not pardoned — pleaded guilty to manslaughter in 2008, received a one-year sentence and testified against his former colleagues.

A federal judge threw out their case in 2009, but the Obama administration took it up again.

Slatten was convicted for committing first-degree murder and sentenced to life in prison for the killing of Ahmed Haithem Ahmed Al Rubiay, a 19-year-old Iraqi medical student who was behind the wheel of the Kia, driving his mother to a doctor’s appointment.

“In killing and maiming unarmed civilians, these defendants acted unreasonably and without justification,” the U.S. attorney’s office said in a statement at the time of sentencing in 2015.

“In combination, the sheer amount of unnecessary human loss and suffering attributable to the defendants’ criminal conduct on Sept. 16, 2007, is staggering.”

A federal appeals court halved the sentences for Slough, Liberty and Heard and overturned Slatten’s first-degree murder conviction. He was convicted again in 2019.

Speaking to the Tennessean newspaper that same year, Slatten’s girlfriend, Whitney Judd, said lawyers for the four had been lobbying Trump to grant a presidential pardon.

“They are all four dedicated combat veterans, and all four are innocent men,” she said.

“Our goal is to bring Nick home, and right now we feel like a pardon is our best bet.”

In Iraq, Afghanistan and other theaters of war, the United States came to rely heavily on contract security details who were not held to the same discipline or accountability standards as U.S. military personnel.

The presence of contractors blurred the lines of who was official and who was not, while corroding any sense of rules and regulations.

The United States has consistently argued it need not join global judicial systems, such as the International Criminal Court, because it can bring its own people to justice when necessary.

The pardons would seem to gut that argument.

At times, Trump has appeared to give illegal military violence his blessing.

“We train our boys to be killing machines, then prosecute them when they kill!” he tweeted on Oct. 12, 2019.

He pardoned Mathew Golsteyn, a former Green Beret commando who was facing charges for his role in the alleged execution of a suspected bomb maker in Afghanistan in 2010.

And he pardoned Clint Lorance, a former Army lieutenant who was serving a prison sentence for ordering his soldiers to open fire on unarmed Afghan men in 2012. Two of them were killed, and several members of Lorance’s platoon testified against him.

Trump also moved to undo disciplinary action against Edward Gallagher, a Navy SEAL who was acquitted of murdering an Islamic State captive in Iraq in 2017, but convicted and demoted for breaking rules by posing for photographs with the body.

In an extraordinary example of presidential meddling in the military discipline process, Trump reversed the demotion and blocked an effort to eject him from his elite SEAL unit. Gallagher has since left the military.