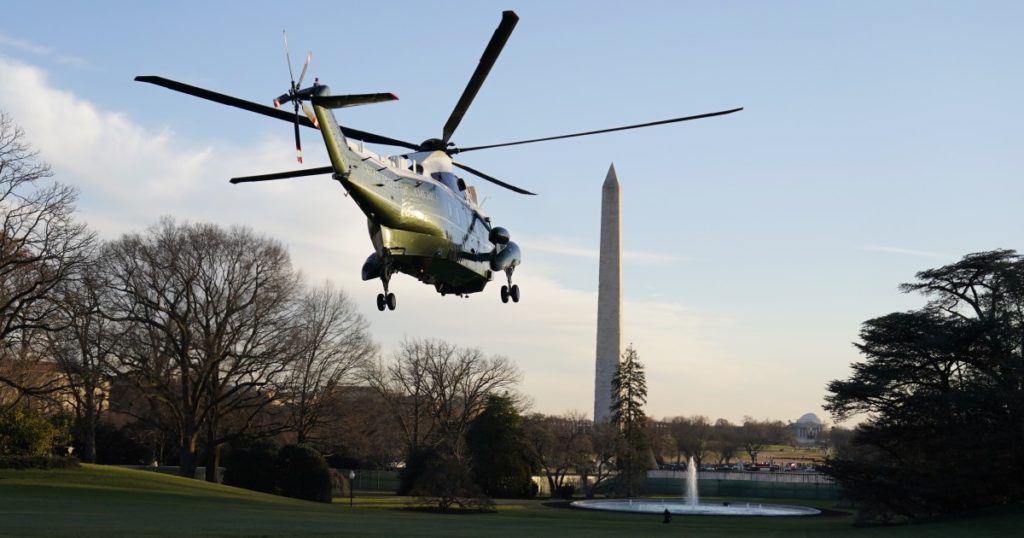 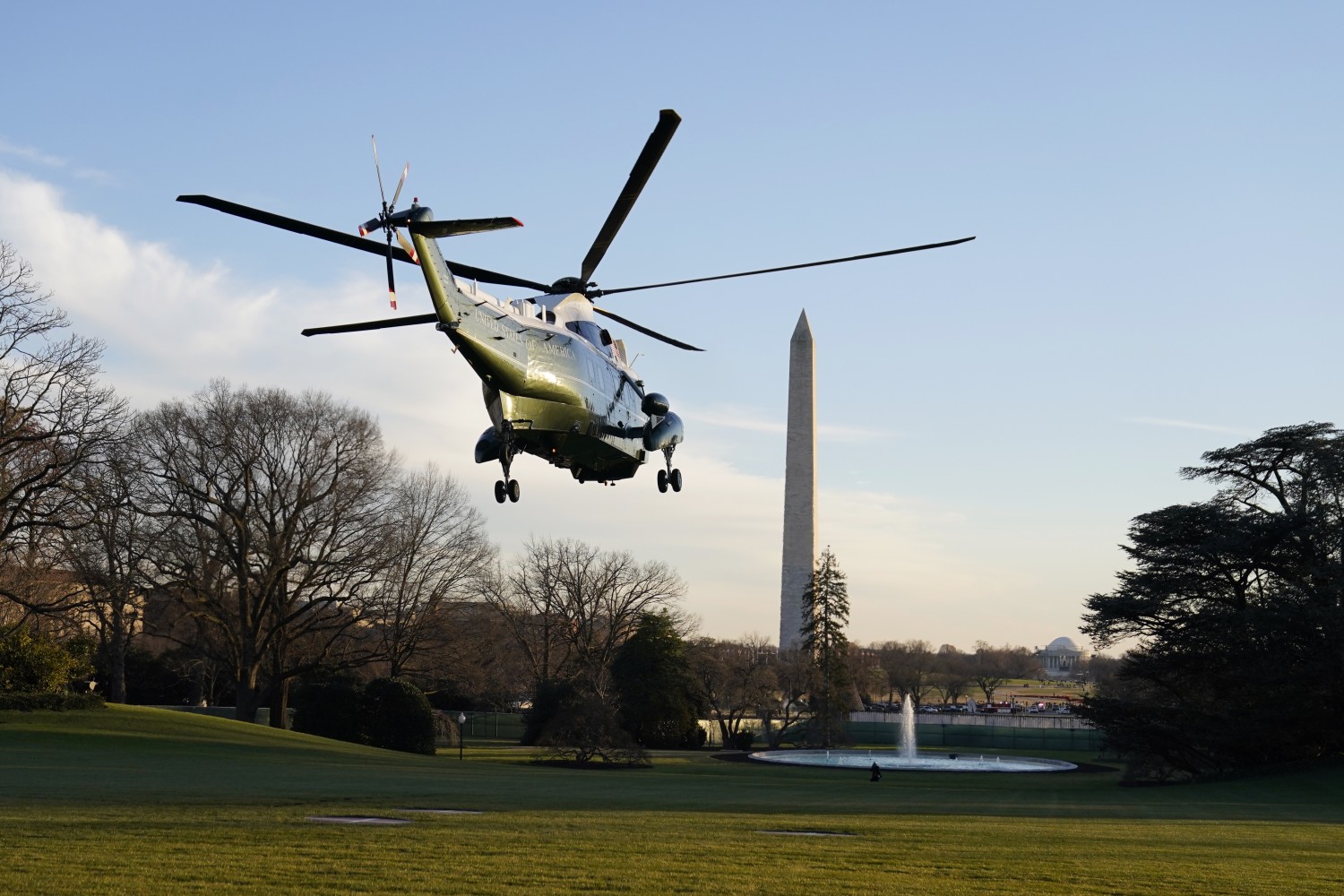 What may well be the final two legislative battles of the Trump presidency unspooled in typically chaotic fashion Wednesday as the president departed Washington for his Mar-a-Lago resort, leaving behind a vetoed defense bill, continued uncertainty over the fate of some $900 billion in COVID relief, and some very dismayed Republican leaders.

In a taped message Tuesday night, Trump denounced as a “disgrace” a $2.3-trillion year-end spending bill that congressional leaders of both parties had negotiated with his Treasury secretary. He demanded Congress approve $2,000-per-person relief checks, rather than the $600 checks the bill includes.

On Wednesday, he followed through on threats to veto the $741-billion defense bill, which authorizes a vast array of military programs and includes a 3% pay increase for service members. Trump said he vetoed the bill because Congress had not included an extraneous measure he backs that targets social media companies. He also said he opposed a provision to rename military bases that were named after Confederate generals.

The bill passed both the House and Senate with more than the two-thirds necessary to override a veto, but some Republicans who voted for it have said they won’t join that effort. If the override passes in the House, the Senate will take it up later in the week.

Trump continued to keep both sides guessing whether he would veto the spending bill containing the coronavirus relief package or just complain about it, perhaps as a way of punishing Republican Senate leaders who have not backed his latest efforts to subvert November’s presidential election, which he lost to Democrat Joe Biden. White House officials, many of whom had been caught off guard by Trump’s message Tuesday, could offer no clarity.

Either way, Trump’s move created huge problems for Republicans, pitting their fear of getting crosswise with a mercurial president against their distaste for further large helpings of government spending. They’ll face their first test on Thursday, when Pelosi plans to bring a measure to the House floor that would provide the $2,000 checks demanded by Trump.

The measure will come up under rules that require unanimous approval, and there’s a strong likelihood that at least one Republican will object and block the effort for now.

Some Republicans have backed direct checks to individuals as part of the COVID-19 relief package. Earlier this month, GOP Sen. Josh Hawley of Missouri joined independent Sen. Bernie Sanders of Vermont in demanding that any COVID bill include checks.

Others, however, oppose any direct payments, saying much of the money would go to people who don’t need it.

Other Republicans don’t object to checks in principle, but balk at the extra spending. Direct checks account for about $200 billion of the roughly $900 billion of COVID relief in the current bill. Increasing the checks to $2,000 for adults would add about $370 billion to the cost, according to an estimate by Ernie Tedeschi, an economist who was a senior Treasury Department official in the Obama administration. In negotiations over the last few weeks, Republicans insisted on keeping the total cost of COVID relief below $1 trillion.

If a shutdown happens, it could last until after Biden is sworn in as president on Jan. 20, since the current Congress goes out of business on Jan. 3 — leaving little time to work out a compromise — and the new Congress is not scheduled to conduct legislative business until after the inauguration.

The imminent end of the current Congress could also allow Trump to exercise a so-called pocket veto — a relatively rare measure in which a president blocks a law passed at the end of a legislative session by declining to act on it before Congress adjourns. Because of the bill’s massive size, it won’t be formally printed and sent to the White House until later this week, congressional officials said. Once the White House receives it, Trump has 10 days, excluding Sundays, to act.

Further increasing the risks, unemployment benefits for millions of Americans will expire on Friday, deepening families’ financial distress and potentially weakening the economy. The measure that passed Congress would extend benefits into March.

The political stakes are extreme, as well. Senate Majority Leader Mitch McConnell of Kentucky and his fellow Republican leaders backed the COVID relief package in part to boost the chances of the party’s candidates in the twin runoff election in Georgia that takes place in less than two weeks.

As soon as the bill passed, Georgia’s Republican incumbent Sens. Kelly Loeffler and David Purdue began touting their votes in favor of the package. Trump’s assault cut the legs out from under that strategy and provided an opening that their Democratic opponents seized.

Democrat Jon Ossoff, Perdue’s opponent, told CNN that the “$600 is a joke. They should send $2,000 checks to the American people right now, because people are hurting.”

“They should have done it two months ago,” he added.

Loeffler’s opponent, the Rev. Raphael Warnock, called on her to “return to Washington and support $2,000 checks.”

On this issue, “Donald Trump is right,” Warnock said.

Loeffler gave an equivocal response when reporters in Georgia asked whether she would support larger checks.

“I’ll certainly look at supporting it, if it repurposes wasteful spending toward that, yes,” she said.

The “wasteful spending” line echoed Trump’s complaint that the bill Congress passed includes money for foreign aid, support for museums and other cultural institutions and other items that he decried as a waste. Nearly all of the specific items he mentioned, however, including aid to Egypt and money for the Kennedy Center in Washington, were in the budget he submitted to Congress in the spring.

As Republicans tried to size up the damage, Democrats were gleefully embracing Trump’s proposal for larger direct checks.

In a letter to Democratic colleagues, Pelosi challenged House Republican leader Kevin McCarthy (R-Bakersfield) to agree to her request for unanimous consent for a bill to provide the larger checks.

For Republicans, the events provide one more — perhaps final — reminder of the difficulties of negotiating legislation with a president who is uninterested in details, frequently disengaged and unwilling to delegate authority.

Trump was almost entirely absent from the talks over COVID relief, focusing instead on his floundering efforts to overturn Biden’s election victory. Treasury Secretary Steven T. Mnuchin represented the administration, but Republican leaders knew they couldn’t be sure Trump would stick by his Treasury secretary’s agreements.

If Trump wanted larger checks, he could have worked to make that happen, Buck said, but “he has never, ever, ever demonstrated that level of discipline or interest in anything that Congress is doing.”