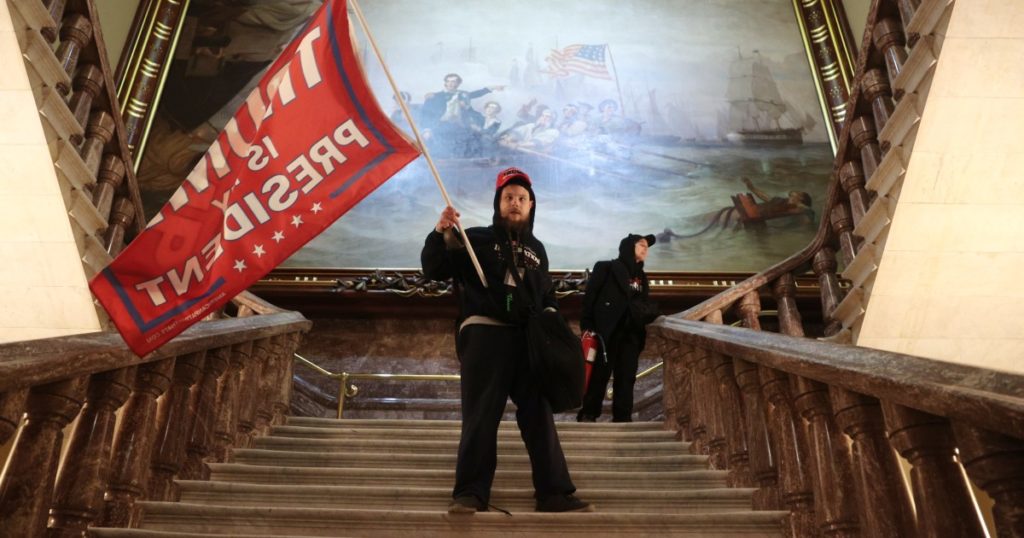 Four years of incendiary, divisive and dishonest rhetoric from President Trump culminated with long-predicted violence Wednesday as a mob of his supporters stormed the Capitol, breaking its windows and doors, vandalizing offices and disrupting a constitutional ceremony intended to validate the peaceful transfer of power to President-elect Joe Biden.

The mob’s march on the Capitol came just after Trump encouraged supporters to do so during a 70-minute address rehashing his false claims that Democrats stole the election. Congress had just begun formally ushering in the post-Trump era by taking up the states’ electoral college results.

The televised coverage of thousands of pro-Trump insurrectionists overwhelming police, forcing officers to draw their weapons and lawmakers to flee the House and Senate chambers to go into hiding, was a breathtaking demonstration of what Trump has wrought — a mob as heedless of law and norms as he has been, willing to literally trash the fundamental institutions of American democracy.

It was a scene of tumult more menacing than the violence of the white supremacists in Charlottesville, Va., in 2017, which killed a female counterprotester; Trump famously said there were “very fine people, on both sides.”

And it recalled other episodes in which Trump supporters took license from his words to commit or plot violence, like the fervent fan who sent crude pipe bombs to the president’s enemies, and the armed protesters who stormed state capitols and even planned to kidnap Michigan’s governor, encouraged by Trump’s tweets to “LIBERATE” their states from pandemic lockdowns.

“This violence was the inevitable and ugly outcome of the president’s addiction to constantly stoking division,” said Sen. Ben Sasse (R-Neb.). “This is beyond wrong and illegal. It’s un-American.”
The spectacle, carried live on cable news networks, was unprecedented, and a fitting coda for the term of a president who has systematically undercut the rule of law, taken a sledgehammer to Washington norms, and consistently favored his own political and personal interests over those of his own party and his closest allies.

The situation escalated just moments after Trump, speaking at a “Save America March” gathering at the opposite end of the National Mall, vowed to “never concede” the election and urged his supporters to march to the Capitol to pressure Republican lawmakers to act with “the kind of pride and boldness that they need to take back our country” — by rejecting states’ election results that show Biden won.

But the uprising likely undermined Trump’s cause, alienating Republican lawmakers already infuriated and blaming Trump for the party’s loss of its Senate majority with the results Wednesday of Georgia’s two Senate runoff races. Internal party polling showed Georgia’s two Republican senators narrowly ahead up until the final weeks of the campaign, when their support noticeably dipped after roughly a dozen Republican Senate colleagues announced they would formally challenge the electoral college result on Trump’s behalf.

“This is what happens when a party is entirely defined by a single figure,” said Brendan Buck, a Republican who was a top aide to former House Speaker Paul D. Ryan (R-Wis.). “Donald Trump has a loyal, passionate following, but he’s also toxic to suburban and Black voters. That cost us these seats because the race was really about him.”

The chaos at the Capitol dampened enthusiasm for the futile attempt by more than 150 House and Senate Republicans to challenge the election result on Trump’s behalf, and prompted open discussions about invoking the 25th Amendment to remove Trump from office less than two weeks before he must leave it.

Trump was in the White House watching the coverage as the mob converged on the Capitol, at one point tweeting his irritation with Vice President Mike Pence, who as the president of the Senate had gone to the Capitol to oversee the count, which is all the law and Constitution empower him to do. Pence defied Trump’s calls for him to try to unilaterally invalidate the election result.

“Mike Pence didn’t have the courage to do what should have been done to protect our Country and our Constitution,” Trump tweeted.

That news further riled some Trump supporters, TV interviews showed. Only after more than an hour of watching the escalating chaos did the administration dispatch the National Guard to the Capitol — and ultimately it was Pence, not Trump, who coordinated with the Pentagon, the vice president’s office confirmed. As former administration officials criticized Trump’s meek response to the violence by his supporters, the president tweeted some grudging admonishments.

“I am asking for everyone at the U.S. Capitol to remain peaceful. No violence! Remember, WE are the Party of Law & Order,” he tweeted as photos were surfacing on social media of Trump supporters posing behind House Speaker Nancy Pelosi’s desk, appearing to loot a wooden podium affixed with a congressional seal and attempting to replace an American flag hung from the Senate balcony with a blue Trump banner.
President-elect Biden scrapped a planned speech on the economy to speak to reporters about the siege of the Capitol, and again underscored his promise to bring a different style of leadership. He implicitly blamed Trump for inciting the violence.

Almost simultaneously, Trump tweeted a one-minute video of himself in the Rose Garden, urging supporters to disperse but declining to condemn their violence.

Trump, who last year condemned Black Lives Matter demonstrators as “thugs” and signed an executive order endorsing prison sentences for protesters who damage federal property, was silent on the damage by the Capitol rioters, and instead praised them.

“We have to have peace, so go home. We love you, You’re very special,” Trump said. “I know how you feel, but go home and go home in peace.”

In another tweet Wednesday evening, Trump seemed to justify the insurrection as his supporters’ understandable response to the election, again falsely describing it. “These are the things and events that happen when a sacred landslide election victory is so unceremoniously & viciously stripped away from great patriots who have been badly & unfairly treated for so long,” he tweeted. “Go home with love & in peace. Remember this day forever!”

In a sign of Trump’s growing isolation amid his provocations, Vermont’s Republican Gov. Phil Scott called for the president’s removal from office, and the National Assn. of Manufacturers — a Republican-friendly business group — put out a statement by its president, Jay Timmons, denouncing Trump and calling on Pence to invoke the 25th Amendment provisions allowing him to replace the president.

“The outgoing president incited violence in an attempt to retain power and any elected leader defending him is violating their oath to the Constitution and rejecting democracy in favor of anarchy,” Timmons said.

Former President George W. Bush didn’t name Trump but said in a statement condemning the mayhem, “I am appalled by the reckless behavior of some political leaders since the election.”

Former President Obama was more pointed: “History will rightly remember today’s violence at the Capitol, incited by a sitting president who has continued to baselessly lie about the outcome of a lawful election, as a moment of great dishonor and shame for our nation. But we’d be kidding ourselves if we treated it as a total surprise.”

Although many Republicans stopped short of condemning Trump, several — even some of his longtime allies — issued pointed statements condemning him as well as the rioters.

“The president bears responsibility for today’s events by promoting the unfounded conspiracy theories that have led to this point,” Sen. Richard M. Burr (R-N.C.), said in a statement.

And Sen. Mitt Romney (R-Utah) called the uprising “an insurrection, incited by the President of the United States.”

Alyssa Farah, who served as Trump’s White House communications director, tweeted a message aimed directly at her former boss: “Condemn this now, @realDonaldTrump — you are the only one they will listen to. For our country!”

And Sen. Lindsey Graham (R-S.C.), one of Trump’s most stalwart Senate allies, offered his support for Biden. “I could not agree more with President-elect Biden’s statement to the nation. Time to retake the Capitol, end the violence, & stop the madness,” Graham tweeted. “Time to move forward in governing our nation.”