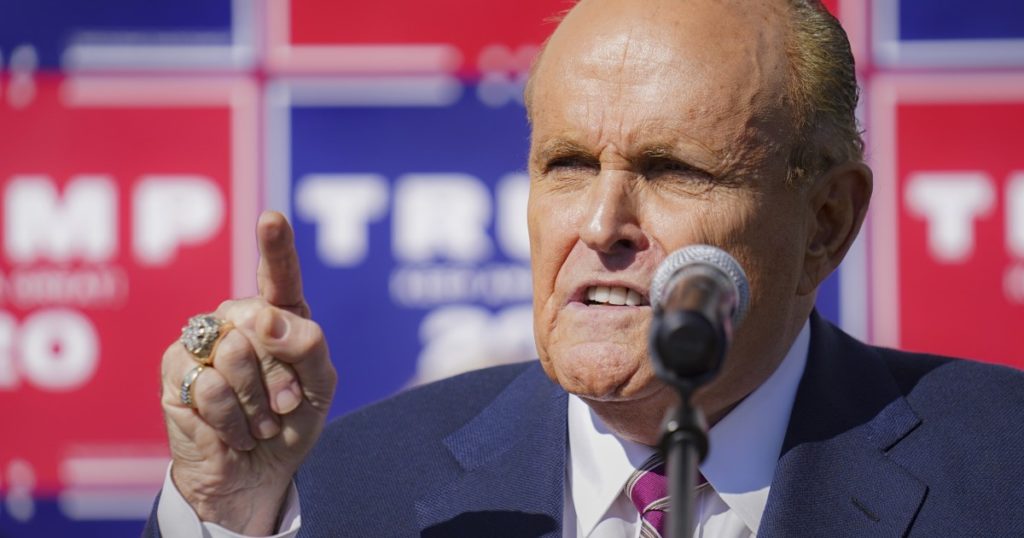 Since election day, Rudolph W. Giuliani has been a firehose of conspiracy theories about why President Trump lost.

He peddled disinformation about voting software in Fox News appearances, spread baseless allegations of fraud from the parking lot of a Philadelphia landscaping company, next to a sex shop, and claimed the media was corrupt in his personal YouTube show, pausing at one point to advertise a cigar store.

On Tuesday, Giuliani tried a new venue — federal court in Pennsylvania. Although the former New York City mayor has served as the president’s personal lawyer for years, it was his first appearance on Trump’s behalf before a judge. It didn’t go well.

In an episode emblematic of Trump’s faltering legal effort to overturn the election result, Giuliani argued without evidence that there was a massive conspiracy behind Joe Biden’s victory even though there were no such allegations in the Trump campaign’s actual lawsuit.

“It’s a widespread, nationwide voter fraud,” Giuliani said. He accused local election officials of being part of a “little mafia” and preventing Republican Party observers from watching ballots being counted. He said only cities “controlled by Democratic machines” had problems, and “you’d have to be a fool to think this is an accident.”

But under questioning from U.S. District Judge Matthew W. Brann, Giuliani admitted, “This is not a fraud case.” Brann did not issue a ruling on Tuesday, but he was openly skeptical of Giuliani’s arguments.

The case is narrowly focused on whether local election officials in Pennsylvania should have given voters an opportunity to fix problems with their mail ballots after submitting them. Some counties did, some counties did not — a divergent approach that reflects the nation’s tradition of local control of elections but which the Trump campaign argued was unconstitutional.

The campaign had already dropped a related issue — whether some Republican observers were improperly barred from watching ballots being processed. The lawsuit aims to block Pennsylvania from certifying the state’s presidential race results. Biden won by roughly 73,000 votes, giving him Pennsylvania’s 20 electoral votes and cutting off Trump’s path to a second term.

Mark Aronchick, a lawyer for the Allegheny County Board of Elections, said Giuliani was in a “fantasy world” and called his allegations “disgraceful.”

Trump has frequently and falsely described the election as stolen, rigged and fraudulent, even firing Chris Krebs, a top cybersecurity official at the Department of Homeland Security, on Tuesday for contradicting him. The Pennsylvania hearing was a rare occasion for the president’s rhetoric to be scrutinized in a courtroom, where evidence is required and legal standards hold sway.

“I am asking you a specific question, and I am looking for a specific answer,” the judge said. “Are you claiming that there is any fraud in connection with these 592 disputed ballots?

“To my knowledge, at present, no,” said the lawyer, Jonathan Goldstein. The lawsuit was eventually dismissed.

The lawsuit in Arizona, which alleged some voters received improper instructions that caused their ballots not to be counted, was dismissed by a state judge after Langhofer acknowledged the issue wouldn’t affect the outcome of the race.

Trump is running out of legal options. His campaign’s lawsuits have been rejected across the country, and states are in the process of certifying their election results ahead of the Dec. 14 meeting of the electoral college.

Trump has until Wednesday to decide whether to pursue a recount in Wisconsin, where Biden won by 20,600 votes. Even Republican officials there have said it’s unlikely that a recount would find enough irregularities to change the outcome, and the process would cost the president’s campaign an estimated $8 million.

A recount is underway in Georgia, where Biden leads by about 14,000 votes. Officials have discovered that some ballots weren’t added to the state’s tally, which gave Trump a minor boost but far from what he needs.

Top firms have shed Trump as a client, and the Republican Party’s best-known election lawyers — many of whom were part of the successful team that helped George W. Bush win the disputed 2000 contest — have steered clear of the president’s case. That has forced him to rely increasingly on lawyers with little experience in elections and a penchant for conspiracy theories.

“I look forward to Mayor Giuliani spearheading the legal effort to defend OUR RIGHT to FREE and FAIR ELECTIONS!” Trump tweeted on Saturday. “Rudy Giuliani, Joseph diGenova, Victoria Toensing, Sidney Powell, and Jenna Ellis, a truly great team, added to our other wonderful lawyers and representatives!”

Ellis is a legal advisor to Trump’s campaign who falsely claims the president won the election. DiGenova and Toensing, who are married, represented Trump allies during the Russia investigation. Powell has become a hero in right-wing circles for her work on behalf of Michael Flynn, Trump’s first national security advisor, who is fighting for exoneration after pleading guilty.

Her arguments in that case have often veered into unproven conspiracies about prosecutorial wrongdoing, and her recent commentary about the election has been even more unmoored. “We’re getting ready to overturn election results in multiple states,” she told the far-right Epoch Times newspaper in a recent interview.

But it’s Giuliani, who goes back decades with Trump, who has played a central role. Eight thousand people dialed in to Tuesday’s hearing to listen, according to the court.

Giuliani has been a loose cannon for Trump. He first began representing him during the Russia investigation, blitzing the news media with allegations that prosecutors working for special counsel Robert S. Mueller III were out to get the president.

Then Giuliani tried to dig up dirt on Biden in Ukraine, even working with a politician there whom U.S. officials have identified as a Russian agent. Giuliani’s effort led to his client’s impeachment last year after it was revealed that Trump asked Ukraine’s president to investigate Biden.

In the closing stretch of the presidential campaign, Giuliani targeted Biden with evidence-free allegations of corruption because of his son Hunter Biden’s foreign business interests. Giuliani tried to boost his case with emails that he supposedly obtained from a laptop abandoned at a Delaware computer repair shop.

Although Giuliani originally made a name for himself as a crusading federal prosecutor in New York, he appeared out of practice on Tuesday. At one point in the hearing, he asked for help submitting evidence — “in case I need a job after this.”