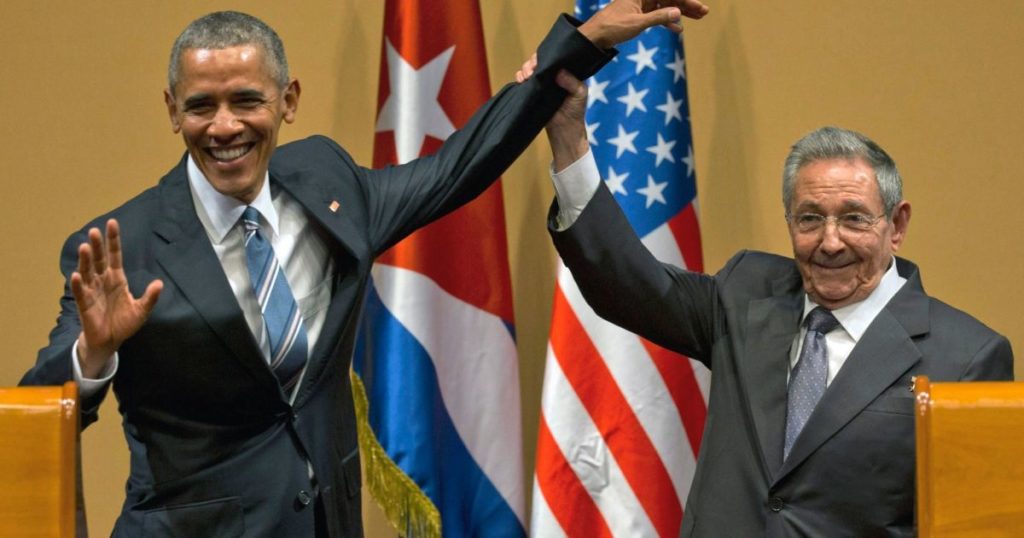 The Trump administration is considering restoring Cuba to the list of nations the U.S. accuses of sponsoring terrorism, an apparent effort to muddle President-elect Joe Biden’s foreign policy plans while offering a potential boost for Republicans running for the U.S. Senate in Georgia, several people familiar with the effort said Wednesday.

Such a move would allow President Trump to boast that he reversed a significant Obama-era initiative and create potential hardship for Cuba, the prospect of which pleases the president’s right-wing supporters and would be seen as a reward to Latinos who voted for him in Florida.

“This is like a stink bomb thrown into the wedding party: a going-away gift that is stinky but robust,” said John Kavulich, president of the New York-based U.S.-Cuba Trade and Economic Council, who has been briefed on the potential action. “It’s an easy sell. It’s one more box Trump can checkmark where he gets to say he reversed something Obama did.”

In what was hailed at the time as a landmark achievement, President Obama in 2014 and 2015 ended half a century of Cold War hostilities with the communist-ruled nation, restored diplomatic ties with Havana, eased travel restrictions between Cuba and the United States and became the first U.S. chief executive to visit the island since 1926.

Obama also removed Cuba from the list of state sponsors of terrorism, a roster created by the State Department after regular assessment of a country’s actions such as attacking civilians or destabilizing other nations. The State Department at the time said that while it retained “significant concerns and disagreements with a wide range of Cuba’s policies and actions,” those no longer rose to the level of state-sponsored terrorism.

Trump, Secretary of State Michael R. Pompeo and other senior administration officials have steadily rolled back many of Obama’s signature actions as they have accused Cuba of being a tyrannical dictatorship, even after longtime leader Raul Castro stepped down and was replaced by President Miguel Diaz-Canel.

They have alleged that Cuba is a promoter of an expanded definition of terrorism that includes the anti-democratic treatment of its own citizens and ties to Iran. The administration has lodged similar accusations against Venezuela and Nicaragua.

Being placed back on the list would make Cuba essentially an international pariah and complicate efforts of American businesses, including several U.S. agricultural states, to trade with Havana or of U.S. officials to negotiate with their Cuban counterparts.

The only other countries on the list are Iran, North Korea and Syria. Sudan was recently removed.

Rep. Gregory W. Meeks (D-N.Y.), the incoming chair of the House Foreign Affairs Committee, said Trump and his advisors were seeking to “tie the hands” of the president-elect. “They are playing politics on the backs of the Cuban people,” Meeks said in an interview.

Speaking to reporters Wednesday, President-elect Biden’s spokeswoman Jen Psaki did not address the Cuba issue. However, she said the Biden administration will issue a memo on the afternoon of Inauguration Day to “freeze” controversial regulations and executive orders, especially those issued in the waning weeks of the Trump term.

Reversing the Cuba terrorism designation will probably be more difficult. The State Department, expected to be led by longtime Biden advisor Antony Blinken, will have to refute many of the Trump-era arguments and recertify that Cuba is not a sponsor of terrorism.

The idea of blacklisting Cuba has been discussed in the administration for months, especially when Cuba hawk Mauricio Claver-Carone handled Latin American affairs on Trump’s National Security Council. Claver-Carone, an ally of Sen. Marco Rubio (R-Fla.), left that job in September after Trump nominated him to lead the Inter-American Development Bank, and momentum for the Cuba move seemed to subside.

U.S. officials began recently floating the action, according to people familiar with the debate, who requested anonymity to discuss internal deliberations. The New York Times reported the discussions earlier Wednesday.

Rubio is especially supportive of the proposal. In a recent op-ed for the Miami Herald, the senator urged Biden to not return to Obama’s “concessions” to Cuba.

“Would Biden stand with the dissidents and continue the Trump Administration’s key reforms, which have financially crippled the regime and prioritized the demands of the Cuban people?” Rubio wrote. “Or would he return to the failed Obama Administration policy of rewarding Raúl Castro and Miguel Diaz-Canel with sanctions relief and political legitimacy for decades of repressive behavior?”

Critics of the administration said placing Cuba on the terrorism list seemed timed to help two Republican candidates Trump supports in Georgia, where elections next week will determine which party controls the Senate. The move would allow the president and the senators to trumpet the cause of fighting communism.

Republican Sens. Kelly Loeffler and David Perdue have repeatedly branded their Democratic challengers and the party they represent as socialists.

There was no official announcement on whether Pompeo, in his last 21 days as secretary of State, will finalize the decision. He has been relentless, however, in attacking Cuba, especially for its support of Venezuela and Iran.

“I denounce Sec of State Pompeo maneuvers to include #Cuba in the list of States sponsoring terrorism to please the anti-Cuban minority in Florida,” Cuban Foreign Minister Bruno Rodriguez said on Twitter.

Ricardo Herrero, head of the Cuban Study Group, a U.S. group of Cuban descendants that favors better U.S. -Cuba relations, also criticized the move. “If Cuba posed a real threat to US national security, this administration wouldn’t be so blithe about kicking it around like a proverbial political football to reward its cronies,” he said on Twitter.