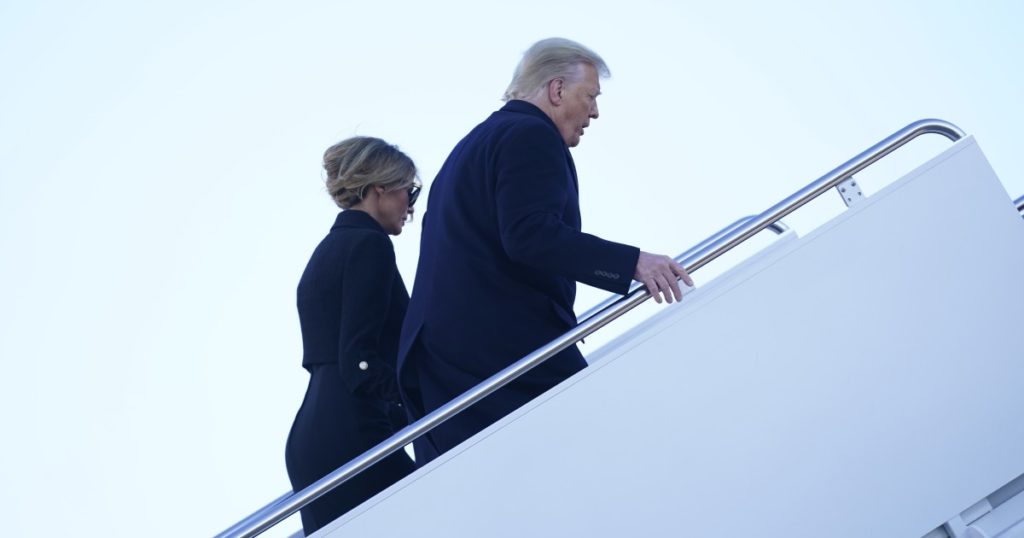 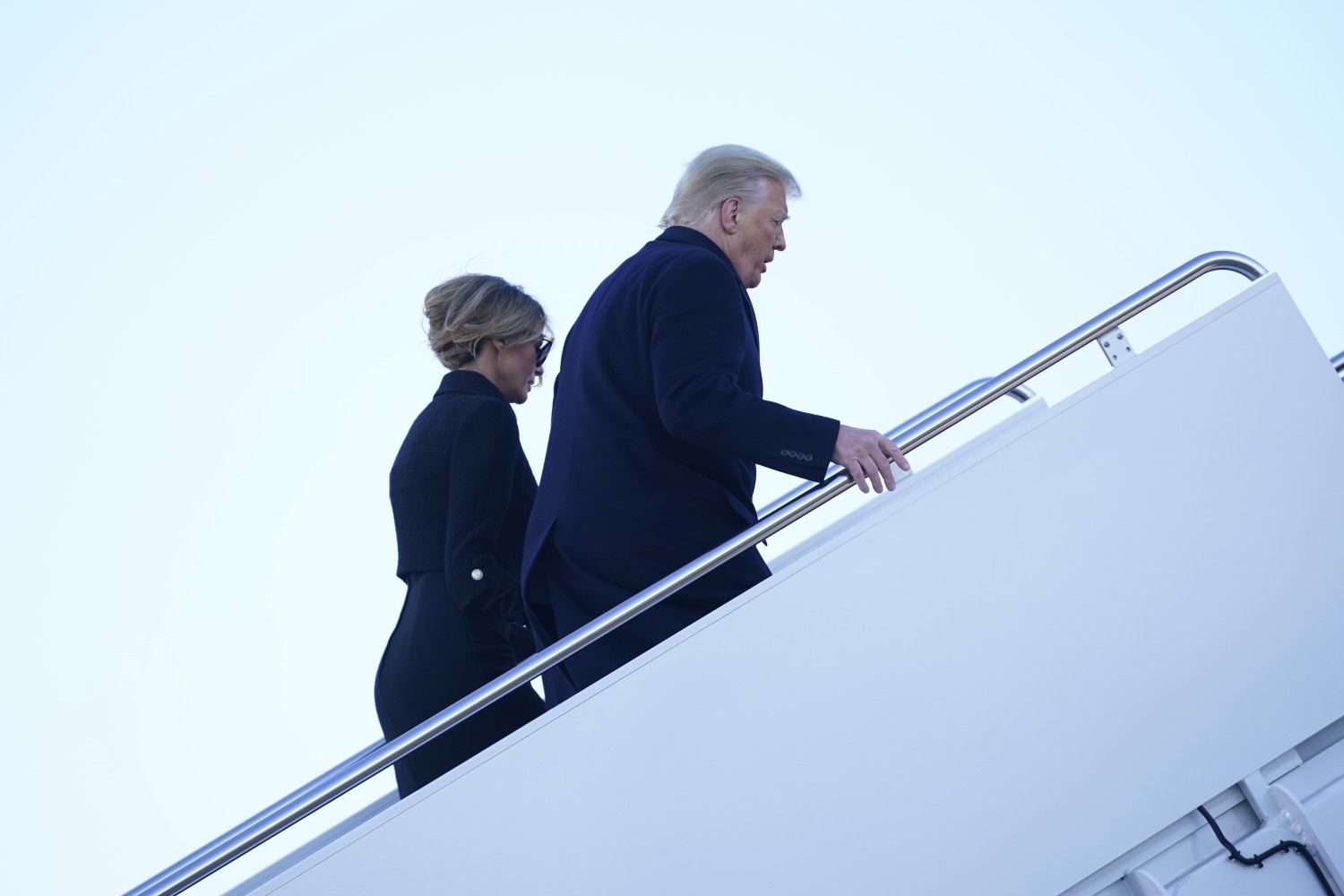 Donald John Trump, after more than two months of his desperate attempts to retain power tested America’s democracy and provoked his second impeachment, by Wednesday morning couldn’t change the final scene as if it were one of his old reality-TV shows. He had no choice but to play the loser.

Less than four hours before his successor was to be sworn in at the Capitol, the 45th president of the United States and First Lady Melania Trump emerged from the White House and briefly bid a reluctant farewell to a small group of reporters and aides gathered nearby. Trump said that it had been the “honor of a lifetime” to serve as president, adding, “Hopefully it’s not a long-term goodbye.”

Then the Trumps walked across a short red carpet to the South Lawn and boarded Marine One, which lifted up at 8:17 a.m. and carried them out of Washington for the final time as president and first lady.

At Joint Base Andrews, a few hundred supporters who’d gathered before sunrise to clear security waited on a frigid tarmac across from Air Force One. The crowd, smaller than expected, faced a flag-lined stage with a lectern bearing the familiar presidential seal, indulging Trump’s desire for some fanfare in his final hours as commander in chief.

Just as in the 1,461 days of his term that preceded it, for Trump this one was more about him than about the office.

Greeted at Andrews by his adult children, Trump smiled amid a 21-gun salute and stepped quickly onto the riser and up to the microphone for a final valedictory. It was a familiar recitation of boasts about accomplishments, approval ratings and economic indicators he falsely described as “the best ever.”

“What we’ve done has been amazing by any standard,” he said. Yet again, he failed to mention his successor’s name.

Trump’s refusal to take part in the Inauguration Day ceremonies alongside incoming President Biden broke a 152-year tradition that has been a hallmark of America’s peaceful transfer of power, and underscored his growing political isolation at the end of his presidency.

Neither the outgoing vice president, Mike Pence, nor Republican congressional leaders showed up for Trump’s sendoff, which came just 14 days after the Capitol was overrun by a violent mob of Trump supporters, and just seven hours after one more controversial act as president — the midnight granting of clemency to 143 people, including his former senior advisor Stephen K. Bannon, who’d been awaiting trial on allegations of defrauding Trump’s own supporters of millions of dollars.

Speaking without a video prompter as the sun rose behind him, Trump tried to project optimism, but his disappointment was evident.

He lamented the pandemic that set the economy back — largely because of his administration’s failure to contain the coronavirus’ spread — and urged the crowd to credit him for the eventual recovery.

“Remember us when you see these incredible things happening,” he said. “Remember us, if you would.”

Trump offered well wishes to “the new administration,” which inherits a historic array of public health, economic and security crises. He predicted that “they’ll have great success” — because of his four years in office.

“They have the foundation to do something really spectacular,” he said. “And again, we put it in a position like it’s never been before.”

Trump did stick to one tradition, leaving a personal letter for Biden in the Oval Office as some past presidents have done for their successors. Neither Biden nor officials revealed what was written.

As Trump said goodbye, he vowed, “We will be back in some form.”

That may be up to the Senate, which is set to convene a second impeachment trial soon. If senators convict Trump for his role in inciting the violent mob that laid siege to the Capitol on Jan. 6 to try to stop the ratification of Biden’s victory, lawmakers would probably vote next on a resolution to bar him from running for office again.

His final words to the country were glib. “Have a good life,” he said. “We will see you soon.”

Just as at his rallies, music blared from speakers. Marines stood at attention as the Trumps walked another red carpet and then up the steps of Air Force One, offering a final wave before their flight to Palm Beach, Fla.

Rather than witnessing the traditional imagery of the outgoing president welcoming the successor at the White House and riding together to the Capitol, Americans were left with a day of split-screen television images. They were prevented from attending the heavily fortified inauguration by the combination of public health and security concerns.

Just as Trump disappeared inside Air Force One, the president-elect and his wife, Jill Biden, left Blair House across the street from the White House and headed to church. Moments later, at 8:59 a.m., the plane taxied and lifted off as Frank Sinatra’s “My Way” played.

As the aircraft climbed into the air with exactly three hours left in Trump’s term, television networks cut abruptly to the Cathedral of St. Matthew the Apostle, where Biden and congressional leaders of both parties filled the pews.

The shift of power, dramatic even without the departing president’s participation, was underway.

Trump’s landing in Florida just before 11 a.m. was largely ignored by the TV networks, which now focused on Biden and the dignitaries arriving for his inauguration at the Capitol. While there’d been talk of a welcoming rally in Florida, only a couple dozen supporters were there when Trump stepped off Air Force One. Dozens more lined the route as his motorcade delivered him home to Mar-a-Lago, including a woman in tears and a man holding a sign with a profanity against Biden. Some Biden supporters were out, too, with signs saying “Loser” and “You’re fired.”

With just 36 minutes left in Trump’s presidency, an aide sent word to reporters that he had granted one final pardon — to Albert Pirro Jr. The ex-husband of one of Trump’s most ardent defenders on Fox News, “Judge Jeanine” Pirro, had been convicted of conspiracy and tax evasion two decades ago.